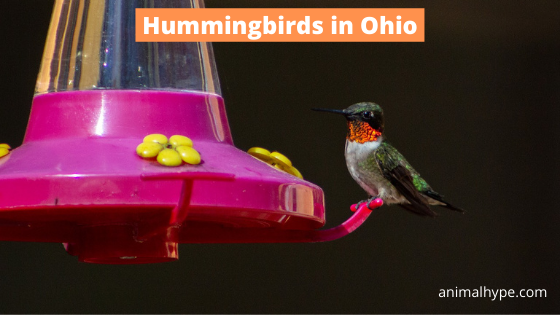 Vibrantly-colored and stupefying, hummingbirds are one of the most interesting bird species across the globe. If you’re inhabited in the United States, you must be familiar with them, hovering around in your backyard every once a while.

There is a probability that you have heard them too because these creatures are named after the buzzing sounds that occur from their fast-flapping wings. These tiny, mesmerizing fliers are adored for their delightful appearance, long bills, and incredibly fast wingbeats.

Despite the fact that they are smaller in size than most of the other 10,000 bird species in the world, hummingbirds are adept at migrating to long-distanced places twice every year.

Typically, these creatures build their nests and breed during traveling. They are well known for their extreme territorial behavior and vigorously guard their nests and food against potential threats.

Can you find hummingbirds in Ohio?

If you are wondering whether you can find these mesmerizing birds in Ohio or not, you are in luck! Apart from friendly faces, blooming flowers, and birds singing in harmony, there is another incredible experience of being an Ohioan; the yearly hummingbird migration.

What’s interesting to know about hummingbirds is that they aren’t intimidated by human encounters and people-inhabited places. So, be on your guard, because they might even pay you a visit to your own patio, making it absolutely enthralling for you to observe them! Usually, only one of their species is regularly found in the state, but there are a couple of others that you may occasionally find too.

The most commonly-found breed is the ruby-throated hummingbird, which you can easily spot throughout North America. These species do not reside here all year round. Yet, since hummingbirds fly to several wintering grounds in South America and Mexico, you can locate them fluttering off-course. 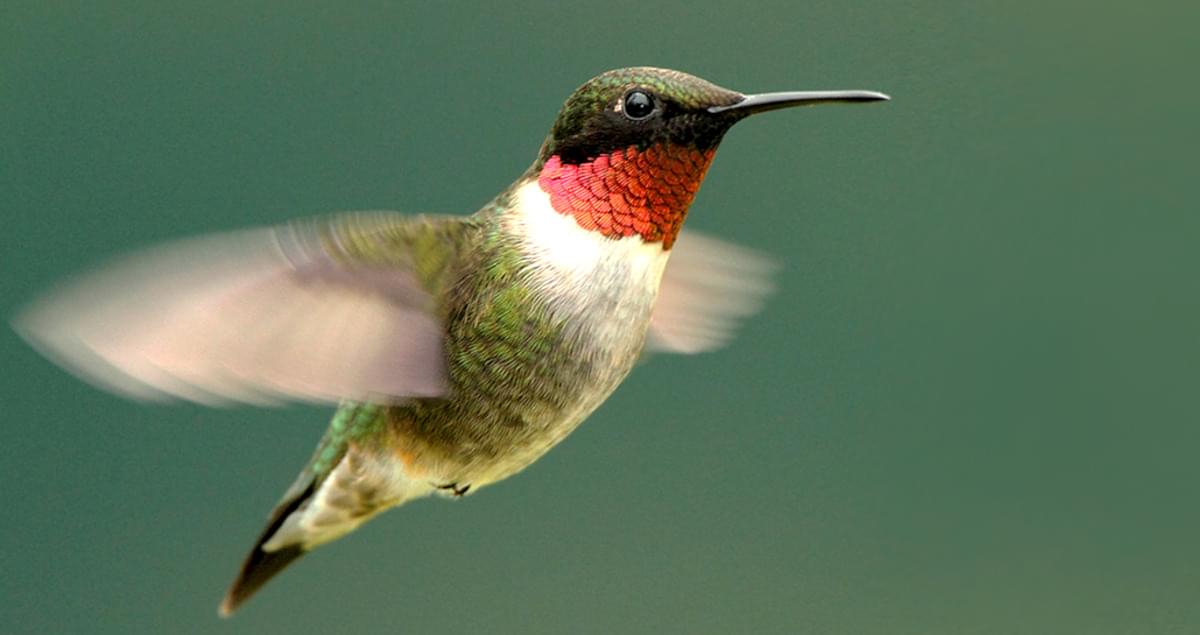 Ruby-throated Hummingbirds are the only breeding species across the eastern United States. After the inception of the fall season, they migrate southwards to savor winters across Central America. Essentially, these species make an appearance in Ohio in summer and spring, during the breeding season. These birds are characterized by their small sizes and thin bills that are imperceptibly downcurved towards their tip.

Their stubby wings do not extend all the way till their tails when perched, and their legs are short enough to not equip them with the hopping and walking capabilities like most other birds. The primary food source for a ruby-throated hummingbird is insects and nectar. To feed, it uses its rapidly fluttering wings, thereby hovering in front of flowers.

It owns an exceptionally long bill that helps it stretch far inside a flower to suck nectar. While wavering, a ruby-throated hummingbird’s wings can beat up to 50 times every second. A male ruby-throated hummingbird carries an iridescent, gleaming ruby-red throat patch that glows in the sunlight. Furthermore, both the sexes bear an emerald green plumage towards the upper parts with whiter underparts.

Another interesting fact is that the female ruby-throated hummingbird raises her offspring in a compact nest fastened by spider web strands. Did you know? During the winter season, these birds migrate to the Caribbean islands and parts of Central America, a journey that demands a constant flight of 20-hours!

You can find these inquisitive, bold species in plenty of spaces, gardens, open woodlands, meadows, and suburbs. Moreover, if it’s on your charts, it’s highly likely for a ruby-throated hummingbird to pay a visit to your backyard! So, if you are seeking these feathery friends, plant flowers with orange and red hues alongside a feeder to attract them.

Faintly larger than Ruby-throated Hummingbirds, Anna’s Hummingbirds can be usually spotted all year round near the western coast of the States. Even in the winters, when there are no other species found, you can come around these birds. These creatures are medium-sized and possess broader-tails attached to their stocky bodies.

An anna’s hummingbird prefers flying across open spaces, like spacious woodlands, gardens, and desert sage scrubs. It is also common in residential streets, savannahs and groves. What’s interesting to know is that it is very likely for them to visit feeders. You might find these occurrences to be somewhat rare, but during winters, many bird enthusiasts in Ohio have found these hummingbirds far east of their range.

These West-Coast residents are mostly green, while some are also grey-bodied. The males feature lustrous reddish-magenta feathers on their throats and heads, that can appear brownish in the absence of direct sunlight. Also, they are admired for their highly-vocal capabilities, stirring everyone with a metallic, buzzy song!

The tail of an anna’s hummingbird extends beyond its wingtips when perched. This green species is a blur of motion as it glides over flowers looking for things to feed upon.

A male Rufous Hummingbird can be identified with its shiny orange, coal-alike throat that seems to glow in the sunlight, while its female counterpart carries a speckled, white-colored throat with a green crown and back. This species of hummingbirds is extremely slender and small, possesses upright bills and short winds that do not extend towards the tail’s ends while perched.

These hummingbirds look fairly similar to Allen’s hummingbird. The only significant difference is their presence in a much wider landscape. Rufous hummingbirds usually breed along the North-Eastern coast of North America and travel Southwards to spend their winters in Mexico’s shrubby forests and oak-pine woods with open spaces.

Rufous hummingbirds are characterized by their feisty disposition. There’s one thing you should probably know about them; they are extremely possessive about what’s theirs and won’t think twice before readily attacking fellow birds that visit their nest or food source. This even includes birds that are much larger in size! These territorial are most likely to digress east of their range out of all the species found in North America.

You can spot a Rufous Hummingbird during the fall season and often in winters at various feeders. This species is skilled with pinpoint maneuverability and daring flight capabilities. Essentially, rufous hummingbirds are quite rebellious and channel some great ninja skills by taking food from spider webs or grabbing them midair. 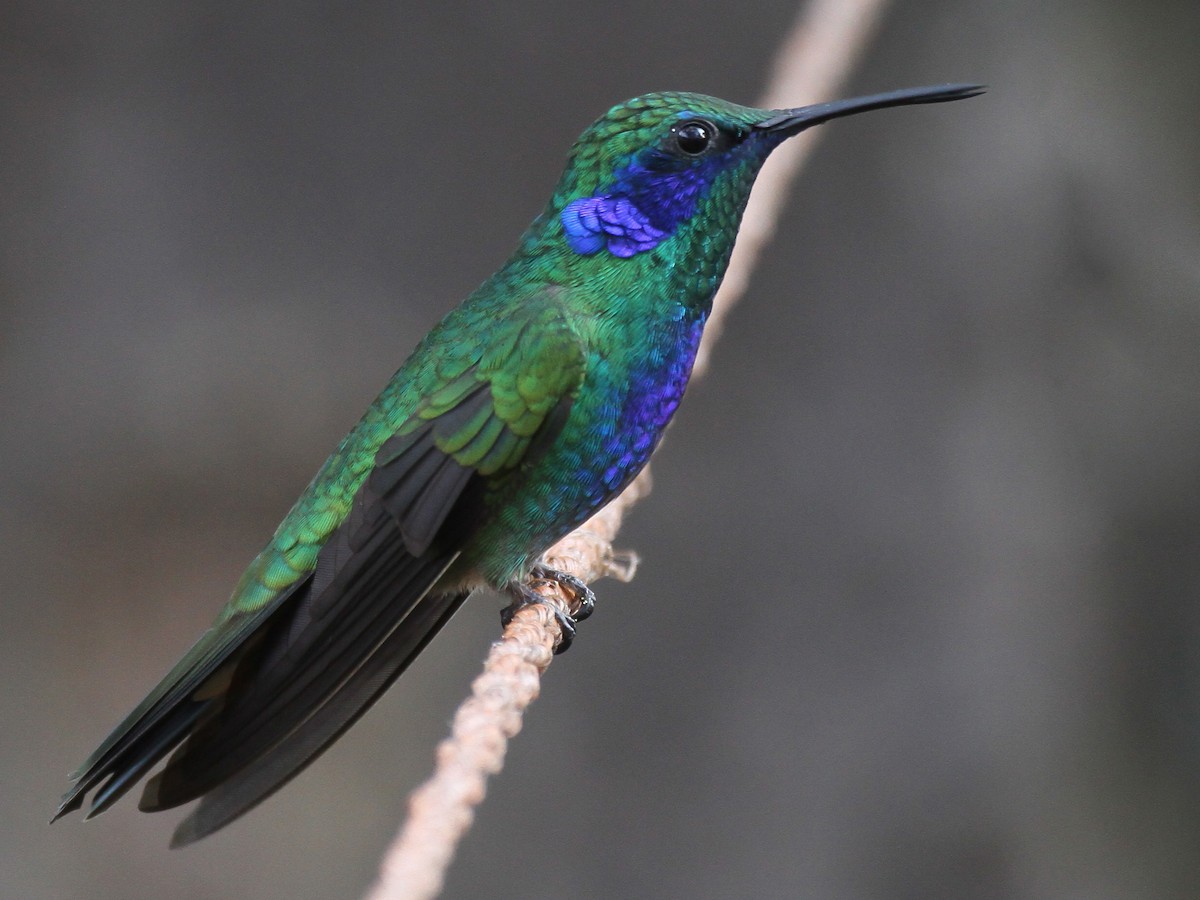 Also identified as the Green Violetear, this dark hummingbird is usually sighted in forest clearings and edges. This species is fairly nomadic in nature, owing to the fact that it keeps moving from one mountain range to another, while a few voyagers also reach Ohio every year. These birds feature a deep green body with a dingy band on their tails.

They are named so because of the pitch-dark violet markings around their eyes, on their chests, and on both the sides of their heads. Although these little majestic creatures excel in hiding themselves while feeding on nectar, yet their chirpy calling makes it a breeze to locate them.

A Mexican violetear has been spotted across scattered places throughout the country, as much as Ohio, but this only happens once in a blue moon. Closely associated with Rufous Hummingbirds, Allen’s Hummingbirds are a compact, small, and stocky species. Primarily, these birds nest along an attenuated strip of California’s coast and travel south across the West-coast of Mexico.

These are usually inhabited in shrubby coastal zones and various other semi-airy habitats with expansive spaces. Just like other species of hummingbirds across the country, there are rare flyers that ofttimes end up away from their standard range, and a couple of them have been found in Ohio too.

Like the Rufous species, Allen’s hummingbirds also share a green and coppery-orange plumage. Due to their identical appearance, telling them apart is an irksome task and generally calls for high-quality photographs to identify them.

Both the sexes flaunt bronze throat patches, and the females feature a tiny patch of reddish-orange towards the center of their throat. These are some of their major defining characteristics. However, the primary method of recognizing this species is through the shape of its tail’s feathers.

An allen’s hummingbird zips from one flower to another to consume the nectar, ticking as it flutters. Additionally, it is also known to fly catch insects. The male species are found gliding through the air in wide arcs while radiating a bumblebee-like buzz through their wings. 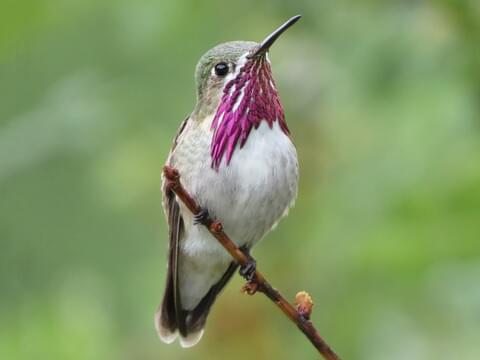 The typical standout hallmark of a Calliope Hummingbird is the shimmery magenta streaks on the male’s throat. Both the sexes are green-colored above. But, the males don a greenish vest towards the bottom, while females and infants bear a peachy wash throughout their underparts.

Calliope Hummingbirds are the smallest birds across North America. Even in comparison to other species, they are significantly small in size. These birds possess short wings that barely extend past their tails. Moreover, their bills are also tinier than other hummingbirds.

A calliope hummingbird is essentially found along the Western Coast of the States. They breed in mountain meadows and open forests that rekindle from loggings and forest fires. During winters, they migrate all the way to the south of Mexico. Speaking of their presence in Ohio, only one Calliope hummingbird has been located at a feeder in its course of spring or fall migration.

Despite their minuscule size, Calliope Hummingbirds are highly territorial. They won’t mind attacking much larger birds to defend what’s theirs, even birds as huge as Red-tailed hawks while breeding. They usually scout low to the ground while taking nectar from flowers and picking on tiny flying insects.

When do hummingbirds arrive in Ohio?

The arrival may vary each year and by species, but most hummingbirds usually reach the Ohio quarters in the first week of May. Most leave the state towards the end of September. As a rule of thumb, the males usually depart first, while the juveniles and females follow around two weeks later.

They only stay for a short span, though. So, if you are a birder, have your hummingbird feeders washed, refilled, and ready for these captivating guests to your backyard!

7 Species of Woodpeckers in Ohio