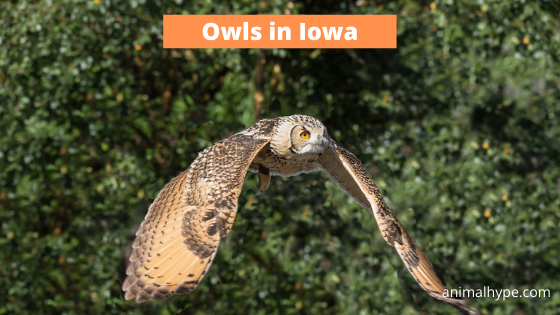 Iowa is a picturesque state in the United States of America with grasslands, wooden environments, and beautiful parklands. The greens in this state often attract various bird and animal species who make this place their permanent homes.

Surprisingly, you can find 9 different species of owls in Iowa. In fact, whichever region you reside in, you’re sure to spot one of these attractive nocturnal birds. It might be difficult to spot them, but with a little work, you’re sure to come across a welcome screech!

These owls have varied habitats and are usually quiet unless faced with danger. So, if you want some first-hand interesting facts about these wonderful owl species, here’s an entire list for you!

Barn Owls are very evenly spread around the world and are one of the most common owls in Iowa. They belong to the Tytonidae family, which is a primary lineage of owls. The only places you won’t see this owl is in the desert areas, Indonesia, the Pacific Islands, as well as the Himalayas.

They feature plumages on their heads, which are usually a rare shade of brown or grey. Plus, they also sport a greyish-brown back. Its unique white-hued heart-shaped face structure is also a captivating sight. What’s more, these owls don’t hoot! Instead, they have a shrill sound.

The Barn Owl is a nocturnal animal just like other owl species and prefers to hunt during the night. It usually feeds on tiny animals and insects. Moreover, it is also known to mate for life. Males are mostly responsible for fetching food for baby owls, while females spend their time incubating.

Barn Owls have a sufficient population and do not pose any conservation concerns. These birds also have very accurate hearing and an overall sense of sound. Even though they’re fond of open, large fields, you can find them almost everywhere in Iowa. Interestingly, they have also been nicknamed as Demon Owl or Ghost Owl. The Northern Hawk Owl is usually found in the Northern areas. It has a medium-sized body and does not migrate much. So, you can find it settled in its breeding areas with other owls of its genus.

Northern Hawk Owls are unique in their living and hunting habits. They are not nocturnal and are usually up and hunting during bright daylight. This owl species is a rare feature in the state of Iowa but does stay in and around forest areas.

These owls do feature striking physical features such as a gorgeous dark brown feathering and plumage along with white-colored spotting on its body. However, its neck does not have spots. Instead, it has a beautiful v-shaped design. Plus, it has a pretty long tail with a dark band.

The Northern Hawk Owl has many different calls that vary with gender and circumstances. Simply put, it makes different sounds for attracting mates, announcing a potential living location, or even for warning against danger.

These owls usually have sharp, shrill sounds that extend to annoying screeches in situations calling for an alert. Sometimes they can continuously scream for two minutes without stopping.

The Eastern Screech Owl is a tiny owl species that is popularly found in North America, Canada, and Mexico. It is quite a common sight among other owls in Iowa and is mostly found in shaded, forest areas instead of open fields.

It is very fond of wooded habitats because of its nocturnal features. This owl species hunts only during the night and prefers to stay hidden during the day. Furthermore, it features a rustic, blackish-grey pattern on its plumage. You can also notice some streaking on its under areas.

Eastern Screech Owls have a short, stocky build but with wide wings. Their heads are round, large, and feature bright yellow eyes and adorable ear tufts. They also sport heavy feathers and a yellow-colored beak.

What’s more, these tiny owls have large and sturdy feet that are feathered for additional flight and support. So, remember not to mess with one!

These owls have great hunting instincts and are not very easy to locate. Plus, they’re also quite intelligent since they avoid settling in wooded areas or parklands occupied by large owl species. Essentially, these owls are a blend of clever instincts and attractive physical features. Burrowing Owls are tiny owls with slender legs located commonly in America. These owls are found across different environments like open fields, farms, deserts, rangelands, as well, as other dry regions. They usually stay in burrows dug by wild animals.

Unlike their species’ standard nocturnal characteristics, these owls are mostly active in broad daylight. However, they like colder and quieter regions compared to hot and humid areas.

Burrowing owls hunt during the early evening and morning hours. So, if you go owl spotting during dawn or dusk, you may be in luck to spot these beauties!

These owls have shiny eyes and greyish-yellow beaks, which vary according to subspecies. Moreover, Burrowing Owls sport bushy-white eyebrows and a flat face. They don’t have ear tufts like other popular owl species. You can even spot a unique off-white pattern on their chins.

Burrowing Owls are found both in the wild and in captivity. When in the wild, they find their arch enemies in snakes, badgers, as well as wild coyotes. However, they are also often killed by wild dogs and cats. The Barred Owl is commonly called the Hoot Owl or the Northern Barred Owl. This owl species is specifically known for its large build. It has attractive physical features, including a dark pattern around its throat and a grayish-brown feather coat. You can also see some gorgeous stripes in its underparts.

Barred Owls are mostly found in North America and are quite popular in Iowa. This owl species is not very fond of migrating and prefers a settled habitat. They usually find a home in forests, grasslands, and woodlands.

They like areas that are shaded with canopies or filled with tall and dense grass. They also prioritize roosting areas that are near water bodies like rivers.

Barred owls feed on small animals, birds, and even reptiles. These owls mostly nest in tree hollows and look out for food on the trees itself.

What’s more, Barred Owls are majorly nocturnal, just like most owl species. Thus, they sleep during the day from sunrise to after sunset. Post sunset, you will hear their screeching calls ringing around the forest since they stay hidden during most parts of the day. 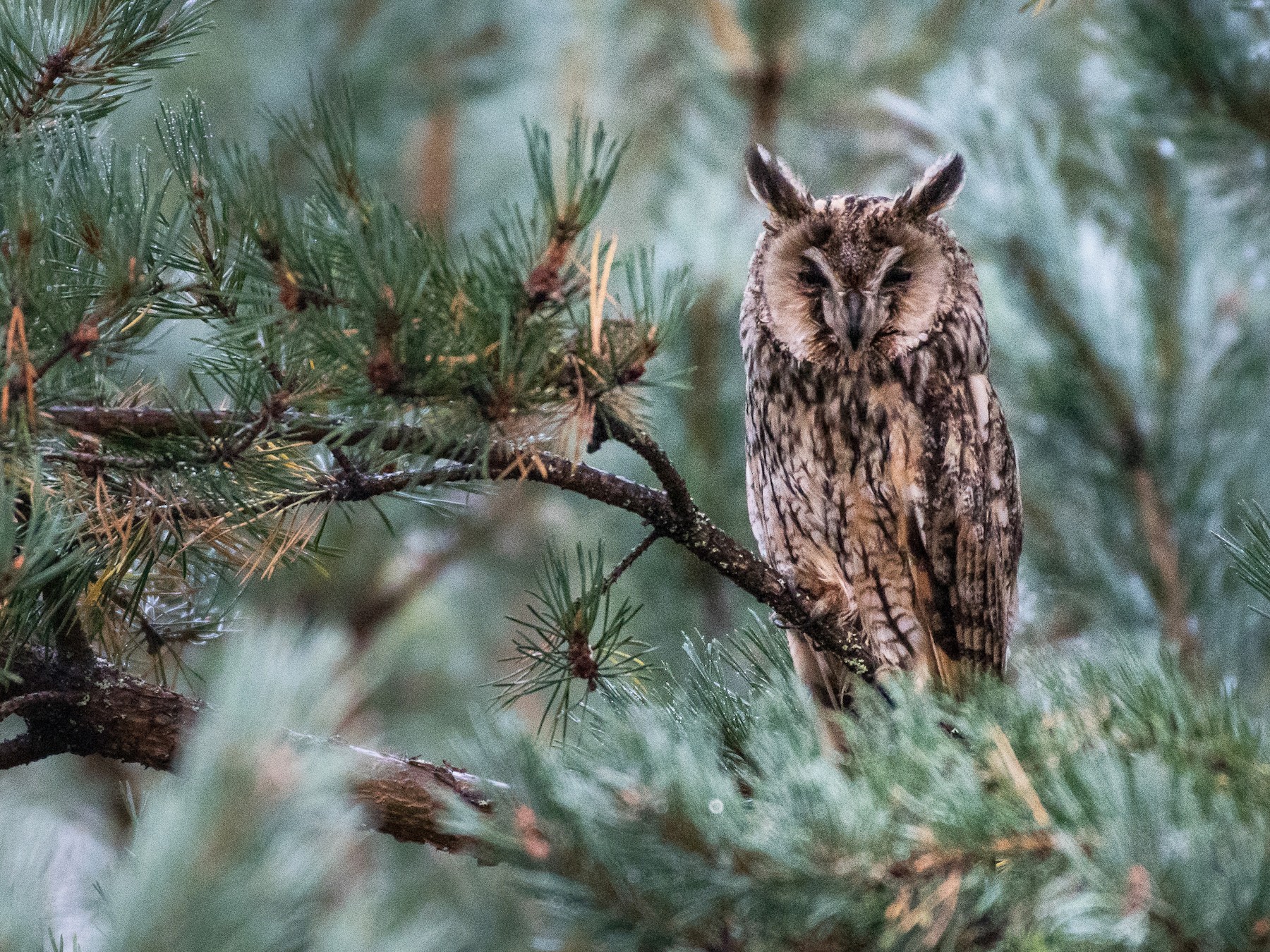 The Long-Eared Owl is popularly called the Cat Owl or the Lesser-Horned Owl. This medium-sized owl species is spread across America, Europe, as well the Palearctic.

If you live in the state of Iowa, you will see these owls during winter or fall. However, they prefer to migrate during the summer months and return again when the climate is cooler.

The Long-Eared Owl is a very focused eater. It does not blindly hunt for food. Instead, it feeds only on rodents, birds, and small insects.

They may not build their nests when settling in a certain region. Thus, they are not very territorial and do not lead a sedentary lifestyle. However, this does make them vulnerable to wild predators like snakes and coyotes.

This owl species is so common around the world that it features on IUCN’s list of ‘least concern species.’ So, if you go owl-spotting in the dark, chilly winter, you may cross paths with this long-winged owl species. However, you may find it hard to distinguish them based on their vocalization since their calls vary in different regions and situations.

The Great Horned Owl or the Tiger Owl is a large owl species found in many American regions. Due to its highly adaptable nature, this species is very common across the country. They are found throughout the year in the state of Iowa.

Great Horned Owls feature a barrel-shaped build along with wide wings and bright, shiny eyes. Vocally, you can distinguish their call as solemn, low-pitched, and deep, which is quite different from other popular owl species.

This species usually feeds on birds, rodents, reptiles, and even medium-sized amphibians. Given its large and stocky build, it is mostly compared to the Bubo Bubo (European Eagle-Owl).

The Short-Eared Owl also belongs to the Strigidae family (typical owl species) and is found in Iowa throughout the year.

It features mammal-like ears covered with feathers making their tufts almost disappear under their bushy coat. You will mostly find this species in grasslands and country regions since they prefer open and spaced-out habitats.

Short-Eared Owls have a unique scientific name, Asio flammeus, which translates to flame-colored eared owl. These owls have large, bright eyes, a stout neck, a large head, and very wide wings. They have a slight tan-brown plumage along with a streaked breast. You will also notice an irregular flying pattern in these owls since they have varying wingbeats.

These owls usually nest on savanna, prairie, meadow, or tundra habitats that are low on the grass and may be filled with weeds. They also feature a unique and clever characteristic that allows them to escape predators.

They pretend to have a broken wing when they sense danger, which does not appeal to predators and drives them away without a fight. Essentially, they are intelligent birds with simple feeding habits.

The Northern Saw-whet Owl is yet another small owl species found in various parts of North America. In Iowa, this owl species is seen mostly during winter, spread across dense woods. This species prefers deciduous woods and usually nest in coniferous forests. You will mostly spot these owls in tree hollows or discarded nests.

These birds are nocturnal and hunt for food during the night. They mostly feed on small mammals and insects. Essentially, they feature white faces with cream and brown-colored patterns with bright, yellow eyes.

As much as these birds are hard to spot, their unique and attractive features make them quite loved, appreciated, and widely-watched birds in the world. Thus, spotting these fascinating creatures is a once-in-a-lifetime experience.