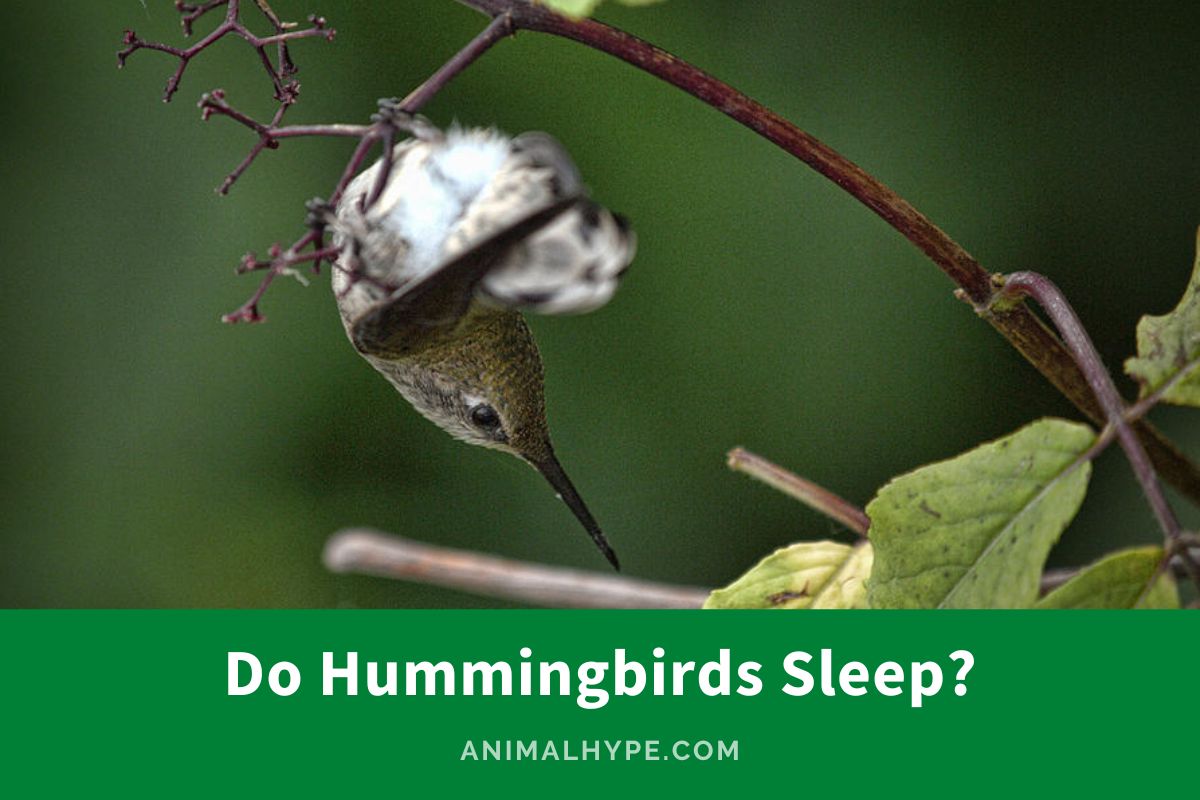 With their quick movements and their lightning-fast wings, hummingbirds travel swiftly through any park or garden, so it makes sense that they would be exhausted at the end of each day. Being such a tiny, fun creature, hummingbirds arouses the curiosity of many, but this thought, in particular, brings up many questions. Do hummingbirds sleep? And, if they do, where could such a little bird find a safe place to spend the night?

So, do hummingbirds sleep? Yes, hummingbirds do sleep every night but this sleep is very unusual. Instead of just a normal sleep, they enter a state similar to hibernation called torpor, but unlike bears or other hibernating animals, they don’t just do it during the winter. They do it every night.

Hummingbirds are the world’s smallest type of bird (the smallest being only 2 inches long), and it is always fascinating to watch their itty bitty bodies buzz around as they suck the nectar from flowers or sip from a backyard feeder.

Because hummingbirds are always moving so quickly, they use up a huge amount of energy (their metabolic rate is 100 times that of an elephant!), and they need to be able to rest without using up anymore, or at least without using up as much as they do during the day.

Torpor allows them to do that. When they are in such a state, their metabolism slows to 1/15 its usual rate, and they lower their body temperatures significantly, low enough for them to become hypothermic.

Their breathing also becomes extremely shallow, so when a hummingbird is in a state of torpor, it looks like it’s dead. Their brains are barely working, and they are in such a sound state of sleep they probably would not even respond to being poked.

By limiting their body systems in such an extreme way, they can prevent themselves from burning too many calories and conserve energy during the night. It is also a way for them to survive during nighttime temperature drops since they do not have enough feathers to keep themselves warm.

As mentioned above, entering their hibernation-like state includes lowering their temperature quite a bit, so they do not have to expend the energy needed to maintain high body temperature.

This process doesn’t have to take place in any specific location. A hummingbird will perch anyplace it feels safe to enter a state of torpor, usually on a branch, and often it will hang upside down to sleep (which adds to the dead bird impression).

A mother hummingbird with eggs or babies too young to take care of themselves will sit on her nest at night so that she can stay with her young.

Then, after three weeks of sleepovers with mommy, the babies will leave and each family member will have to find its own place to spend the night. Because of the complicated nature of this process, hummingbirds have an early bedtime.

They have to start preparing for torpor about thirty minutes before the sun goes down since it takes time for their body systems to slow down and for their temperatures to drop sufficiently. They will locate their safe place and possibly hang upside down, then settle down for the night.

As their systems slow, their necks retract so that their heads are pointed upward at an awkward angle, and their feathers puff out So, not only do sleeping hummingbirds look like they’re dead, but they are also quite fluffy.

In the morning, it takes a full 20 minutes for a hummingbird to wake up (recover from a state of torpor) because, just like it takes time for its systems to slow down, it also takes time for them to speed up again.

During this period, the bird will start to shiver to warm itself back up to a normal temperature, and, sometimes, since the bird’s breath speeds up during its awakening, the hummingbird can sound like it is snoring.

Just like for humans, the first meal for a hummingbird is the most important, so the first task they accomplish after waking up is eating a good breakfast. They will consume a quarter of their daily intake right after they recover from torpor, and then its off to the races yet again.

Why Do Hummingbirds Sleep At Night And Feed During The Daytime?

Hummingbirds are the warm-blooded birds that require warm temperatures for the blood rushing in their body as well as wings speeding.

Also as we know that hummingbirds depend upon the nectar from flowers to survive and most of the flowers open in the day time so, day time during sunlight is perfect for hummingbirds to feed.

But after the sun drops they find a tree hang on to the branch and goes into the torpor where the temperature of the body drops and they conserve the energy.

During the day, hummingbirds feed on a lot of flowers and store enough nutrition into their body so that they can go through the cold night.

Most of the time you’ll find hummingbirds hanging on to the branches of a tree in the torpor state waiting for the sun to come out and flowers to open up so that they can start feeding again.