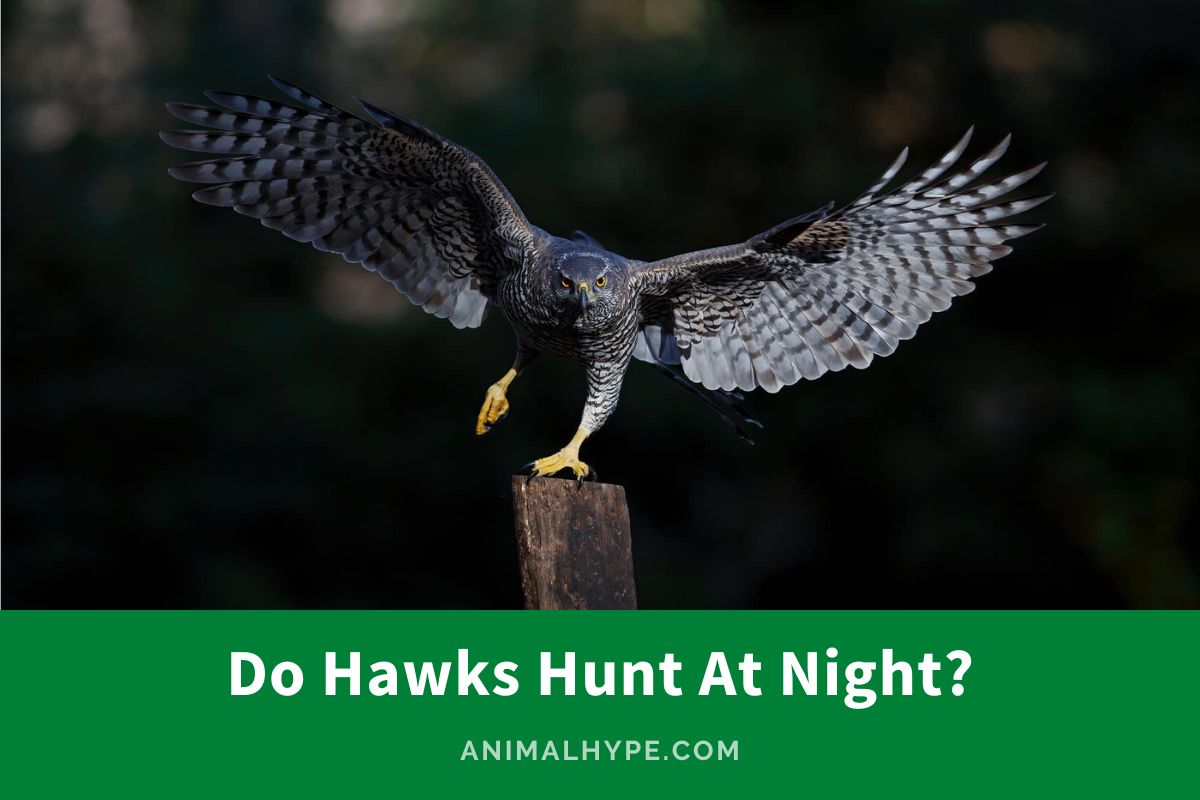 If you own pets that can be hunted by the hawks, should you be extra careful when the night falls? Keep on reading and let us answer you, do hawks hunt at night query in detail.

No, Hawks do not hunt at night. They hunt just before the nightfall and just when it’s starting to get dark, but there is still light in the sky. They use this darkness of the dusk time to take cover and hunt without being noticed by the prey.

Hawks are diurnal birds, this means they are active during the day time and not during the night. They do the hunting part in the subdued evening light. Because they have good eyesight, they prefer keeping track of the movement of the prey and then catch them as soon as they get an opportunity.

Hawks are known to use varied hunting techniques and tactics which depend on the area they are hunting in and also the kind of prey.

Hawks hunting is a sight to behold

Hawks are violent predators but their size and looks make them look gentle and quiet when compared to a Vulture or an Eagle. Hawks are beautiful creatures; they prey mostly on small insects, amphibians, reptiles, and their favorite, songbirds.

When a Hawk flies, it flaps its wings rapidly and uses that momentum to glide through the air gracefully and smoothly. Seeing them in hunting action will take your breath and the notion of hawks being calm and composed, away.

Sometimes it might seem like a hawk is hunting in the night (dark), whereas if you observe closely the light from the sun is still in the sky which makes it a perfect time for the hawks to see the prey.

For hunting, hawks depend a lot on their vision. Their vision is very strong, which is why hawks don’t hunt in broad daylight and prefer taking the cover of the evening darkness.

The Eyesight of the Hawk acts as its primary weapon for hunting. Their eyesight is 8 times stronger and better than the sharpest human eye.

The four kinds of color receptors in the Hawk’s eyes give them the ability to not just perceive the visible range but the ultraviolet part of the spectrum as well.

The sharp eye has acquired special adaptations that allow detection of the magnetic field and polarised light. This is possible due to a large number of photoreceptors fit inside the retina. There are about 1,000,000 per square mm photoreceptors in Hawk’s eyes and only about 200,000 in humans.

A very huge number of nerves connect these photoreceptors to the brain and an indented fovea. This helps in magnifying the central portion of the visual field.

How and what does a Hawk hunt?

If the prey is big, like a rabbit, the Hawk land on top of the prey and stays on top till it gets a good grip of the prey to avoid injury or escape. The first and second talons of the hawk are huge and the others are small. With these two bigger talons, the hawk tears the prey open and with the shorter ones it holds the prey in place.

They use their beak to pluck the feathers which further traumatizes the creature. The hawk starts consuming the prey while it is still living.

Hawks are mostly found in forests, rainforests, marshes, grasslands, deserts, prairies, etc. As they are found in so many places, they don’t distinguish between the wild creatures and pets.

They eat all kinds of insects, rodents, fish and even carrion. These might be the preferred meals for hawks but to fill the belly they can attack your beloved pets too.

Steps pet owners need to follow to save their animals from becoming Hawks’ prey:-

Keep Pets in a Covered Space

You need to keep your pets in a closed space that has a roof so that the pets can be kept outdoors unsupervised. There are different kinds of cages available in the market depending upon the size of your pet and space they need to move around comfortably. The closed enclosure gives the pets the freedom to be outside and prevents any kind of aerial attacks.

If your pets are outside, you need to be around all that while. The predator birds do not attack when they see a larger creature around their prey. If your pet is roaming around in the garden, you need to be equally visible to the bird in the air. Stay close to the pet and avoid standing under an umbrella, roof or a canopy.

Get all Pets out Together

If you own more than one pet then get them out altogether. A Hawk will not attack when it sees many animals together because of the fear of other animals defending their companion or attacking the bird and stealing its kill.

Pets need to be fed inside because a pet gulping a meal is mostly unaware of its surroundings. A pet eating food is more vulnerable to an assault. Also if you feed your pet outside often and the pet food is left unattended then it attracts rodents like mice which themselves are the favorite food of Hawks. Once the Hawk attacks a prey at a place, the place becomes a productive hunting ground. The Hawk will return to this hunting ground often, hence endangering your pets.

If your pets love it in the open then make sure they are in an area that has a tree cover and is not exposed directly to the sky. Make sure that the pet is concealed by nature so that no predator bird can view the pet that is roaming around in the open. Even if the predator spots the pet, the dense nature cover will make it difficult for the Hawks to execute their plan. Too many trees will not allow them to fly in or out of the garden.

The pets need to be trained properly so that they are aware of any kind of threat lurking in their environs. The dogs and cats are many times playful with the birds; this can be dangerous as the bird predators in the sky might see this as an opportunity and attack the pets.

Awareness of the surrounding areas

The pet owners need to be aware of their surrounding areas to safeguard their pets against all kinds of bird attacks. If your area has hawk nests then you should avoid exercising or walking your pets near their nest. In case the predator birds are highly aggressive in the area, then call for the local wildlife management officials so that the birds can be relocated or deterred if considered dangerous.

Hawk Hunting Time According to Weather

Hawks are flexible and opportunistic in their hunting. Their ability to adapt is par excellence. They vary in size but are excellent hunters. During the winter months and fall migration, the Hawks are on a 100% lockdown.

During the summer months, the Hawks are active from early morning to mid-morning and then again they become active during the late afternoon.

During the months when the weather is cool, hawks hover in the sky throughout the day but they attack only during the wee hours of the morning.

Do Hawks hunt together? Most hunting birds are solitary creatures and come together only when they are migrating or mating. Some Hawk varieties hunt in cooperative groups of two to six birds. In these groups, all birds surround the prey and only one of them attacks the prey.

Do Hawks prey on small dogs? Hawks hunt a variety of small animals and pet like small dogs, cats, rodents, snakes, etc. Hawks can hunt anything that weighs being 6 to 60 pounds.

Do Hawks sleep at night? Yes, Hawks do sleep at night but they are light sleepers. Any predator or a bird flying in the air in close proximity can wake them up within seconds.