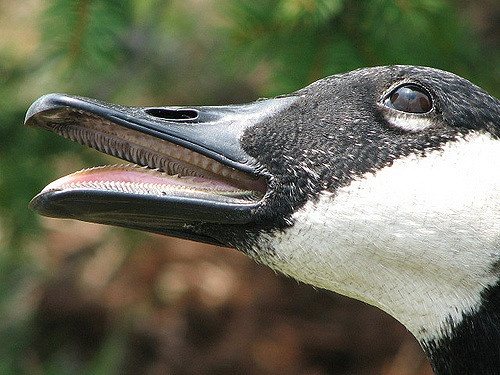 Ducks are one of the most attractive creatures you can see in a park. Last Sunday, I took my 5-year-old to a park, and she was pleased to see those beautiful ducks, and she asked me do ducks have teeth. I was amazed by her curiosity, so I decided to do a bit of research myself and find the answer.

So, do ducks have teeth? No, just like any other bird, ducks do not have teeth. But ducks and some other birds do have serrated bills which looks very much similar to the actual teeth, but they are not true teeth.

Ducks are tropical birds and fantastic creatures. They stand out in many ways, such as their various adaptations and species and their lack of teeth. The word Duck’ represents an abundant species in the waterfowl family, which also includes swans and geese.

Let’s see how the lack of teeth affects the eating habits and behavior of ducks.

Do ducks chew their food?

Because ducks don’t have teeth, they can’t chew the food. Instead of chewing, they simply just swallow the food. Ducks have adapted to their environments over time, precisely the shapes and sizes of their bills. Once the food has been swallowed, it goes to the gizzard where the food gets ground up then sent to the stomach.

They use their beaks to catch the food. Ducks have adapted to their lack of teeth by incorporating a varied diet of small prey, as well as fish and mollusks ( such as snails, mussels, and slugs).

They may not have teeth (like most animals do), but they do have different adaptations and specialized bill structures that help them manipulate their morsels and digest their foods a lot easier.

Many people on seeing these beautiful creatures often misjudge them. They think that because ducks are toothless so they can’t bite.

Contrary to belief, ducks do bite! Some may argue that they bite out of love for their owner or that they bite to establish dominance, but the fact of the matter is that they are more than capable of biting. For those that are interested in owning a pet duck, do be warned that their bites can bruise.

Most ducks tend to aim for your arms, feet, and face. Muscovy drakes and ducks are the most vicious of the bunch. They may fly at you and use their 6-foot wings to their advantage. Muscovy ducks are also well adapted to tear your skin off, via their ridge to their beak.

What to feed a duck?

Since ducks don’t chew, feeders should take into consideration this when selecting the sizes of the foods to give to the ducks. Smaller foods such as birdseed, peas, and small cut vegetables are quite often better, with less chance of the toothless duck choking.

Also, carbohydrates such as bread, cookies, and popcorn do more harm than good as they have no nutritional value to the ducks and is considered as ‘Junk.’ Sometimes big nuts and large food can chock the ducks, so keep it in mind to grind the nuts before you feed them.

Since ducks don’t have teeth, it is always necessary for a duck owner or anyone feeding a duck to know what foods are tasty and safe for a duck to eat.

Beak structure of a duck: Adaptation for a toothless duck

Well, it is true that ducks don’t have teeth, but they have a special gift: an outstanding bill. Duck’s bill is amazingly designed and versatile enough to perform so many tasks.

As mentioned before, ducks have a range of adaptation to better help their tooth-free lives. Here are some of the variations.

Lamellae: These are thin comb-like structures located inside the edge of the duck’s bill, specifically to the side. These structures are used for filtering liquids, such as mud from water. Most ‘dabbling’ ducks have these features; however, like most animals, it differs from species to species.

Grin Patch: This rather unusual part of a duck’s bill includes a curvature on the side of the bird’s mouth with contrasting colors, which may indicate smiling; however, its purpose has not yet been discovered.

Nail: Ducks have a small bump on the tip of the upper jawbone of their bill, called the nail. The nail is most commonly used for digging through mud and debris for food, such as worms and other small specimens. It can also be used as an identification for some duck species.

Spatulate Shape: Ducks have an elongated, flattened bill shape made out of raw bone. This is what gives ducks the strength to crush and pulverize its food. Unlike other species, ducks don’t chew repeatedly.

The Spatulate shape of ducks varies from species to species and helps determine what food ducks eat. The flatter the bill, the more plant-based foods they eat Algae and seeds, etc. and those with sharper bills such as mergansers bills are specialized for more of a fish-based diet.

Well, ducks usually are not really aggressive, but when they are, they can bite your legs or your arms very severely. Male ducks are generally more aggressive than females.

Actually, there are two significant reasons for ducks to be aggressive. Either you keep invading its territory, which makes the male duck very mad, or it is in need of a female consort to fulfills its sexual urge and keep it calm.

Male ducks can be very aggressive toward female ducks during mating. They generally prefer to mate in the water. The Male tries to prove its dominance over the female by grabbing her neck in his beak, and it can sometimes cause female ducks to bleed through their throat.

Well, it is just the natural mating behavior of male ducks.

Do Muscovy ducks have teeth? No, The Muscovy ducks do not have teeth, similar to other birds they rely on their mouths-their bills- which contain a row of thin bristles that separates the nutrients from the water.

Muscovy ducks are quite large, weighing in at around 15 pounds. They have a black and white-colored body and are tropical birds originating from Mexico but mostly found in the United States Of America.