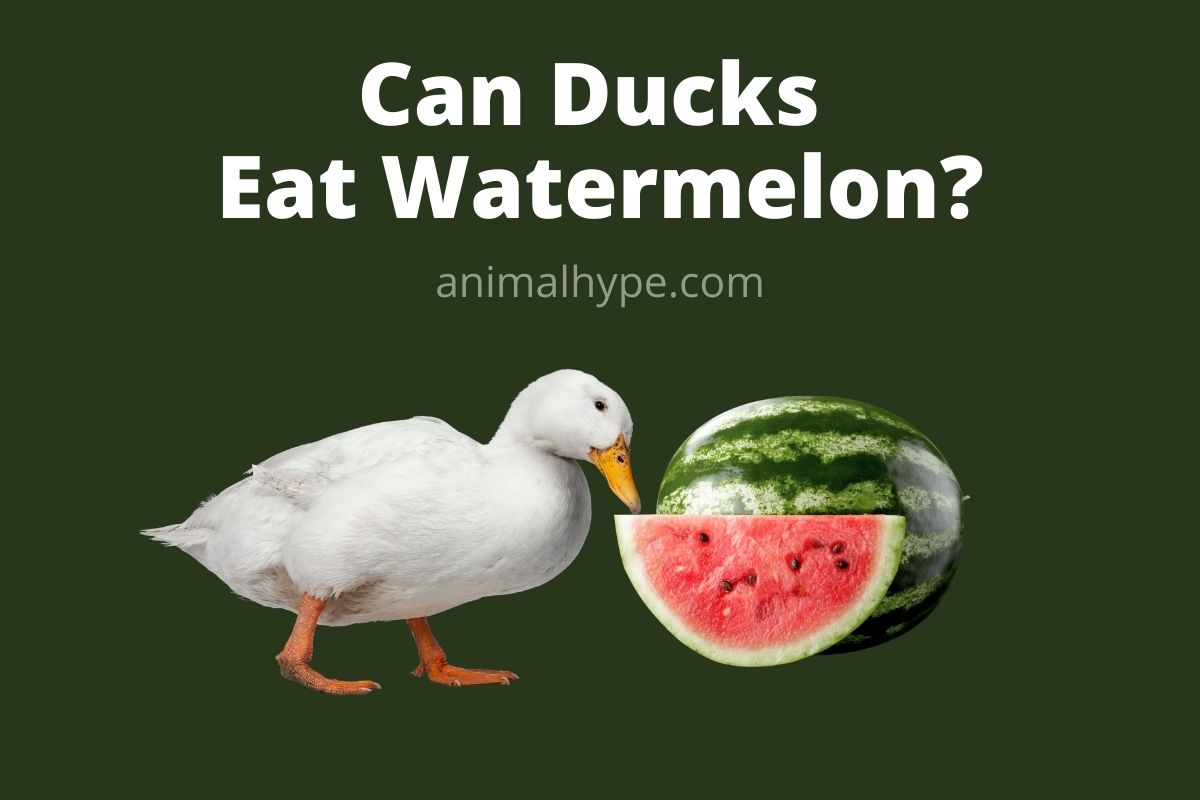 Although ducks are picky eaters with an individual taste, most of the ducks are crazy about them when it comes to fruits. Are watermelons one of these fruits? That’s what we’re going to find out in this article. If you stay with us until the end, you will find all the answers you’re looking for.

Can ducks eat watermelon? Yes, ducks love to eat watermelon because of its juicy, sweet, and soft flesh mixture. Watermelons have plenty of nutritional benefits for your ducks, plus the seeds are not harmful. However, they should only be given in moderation and as a treat.

Why feed watermelons to ducks?

If you ever offer watermelons to your ducks, their eagerness to eat them will give you a clear idea of how much they like the fruit. But is their fondness of watermelons a good enough reason to feed these fruits to them? It shouldn’t be.

Therefore, in this section, we will learn about the health benefits of watermelons for your feathered pets.

But before you get to it, let’s take a quick look at the table given below, which depicts the nutritional composition of watermelons:

The nutritional value of watermelons

Are the seeds of watermelon okay for ducks to eat?

Whenever you add a new fruit into your feathered pet’s diet, its seeds are always your primary concern, aren’t they? And in fruits like watermelons, containing so many seeds scattered all over their flesh, the concern is even more serious.

Before you go through the pain of removing all the seeds from watermelons for your ducks, don’t you wonder if they are safe for your ducks?

Well, the watermelon seeds do contain amygdalin, a chemical compound that degrades into hydrogen cyanide when broken down, obstructing oxygen from traveling into their blood. However, the amount of amygdalin in these seeds is far too little to affect their health adversely.

In other words, while you remove as many seeds from the fruits as possible, even if a couple of them find their way into your pet’s body, there is no reason to be worried.

What about watermelon rind? Can ducks eat it as well?

Because they have seen their pets pecking at watermelon rind, most duck owners seem to think that these rinds are edible to them. This, however, is not true.

In truth, the rind is too tough for the ducks to swallow and digest, just like it is for us. If they’re pecking at it, they’re probably trying to eat the flesh that might still be attached to it. Even if these birdies manage to gobble up a small piece of rind, it is bound to result in digestive problems for them in the least.

Is it okay to feed dried watermelons to ducks?

Dried watermelons are the dehydrated form of fresh watermelons with a much longer shelf life and unique, crunchy taste. It is often consumed as a snack in many households.

But will your feathered pets be able to enjoy these snacks? Let’s find out.

From the nutritional standpoint, both fresh and dried watermelons have more or less the same nutrients, with their quantities being roughly the same as well. This means that whatever nutrients your pets are gaining from fresh watermelons, they can gain from these as well.

However, there is one significant difference between the two: the sugar content. Due to water loss in the dried watermelons, their sugar content becomes much more concentrated and is, thus, higher than that of fresh watermelons.

Moreover, your ducks will probably prefer eating fresh watermelons if given a choice between the two, so there’s no reason for you to worry.

Feeding watermelons to your feathered pets is fairly simple. In fact, there are many different ways you can do it. Let’s check out some of them.

The first and simplest way is to cut the melon into several slices (along with the rind), poke out all the visible seeds, and let them gorge on the flesh.

Another way is to cut out the rind completely and then chop the flesh into several bite-sized cubes. You can also feed them these cubes by hand.

If you have access to some of the other fruits, it would be a great idea to chop them up and mix them with watermelons. This fruit salad will not only add variety to your pet’s diet but will also add more nutrients to their body, making them both happier and healthier.

Did you know that you could also feed your pets blended watermelon juice as a refreshing treat? Here is a quick and fun way to do it:

In the summer months, you can also freeze some of the juice earlier to make their frozen cubes and add them to their treat.

Can I feed my duck spinach? Yes. Spinach is both safe and healthy for your feathered pets. Ducks can eat spinach when it is raw as well as cooked. In addition to spinach, you should also add kale, cauliflower, and Brussel sprouts to their diet.

Is it okay to feed mustard greens to my ducks? Yes, certainly. Mustard greens are not just healthy for the ducks but also liked by them a great deal.

Will ducks eat cucumbers? Yes, cucumbers are as refreshing a treat for your feathered pets as they are for you. In fact, cucumbers, along with zucchini, corn, and peas, are their favorite veggies.

Watermelons are juicy, sweet, and have a soft and crunchy flesh mixture that ducks can’t resist. There’s also their nutritional richness that will really help to keep your pets healthy. Watermelons are full of vitamins A, B, and C, copper, iron, phosphorus, potassium, and magnesium.

Just ensure that you feed them watermelons in moderation so they don’t get overloaded with these fruits. If you feed too much to ducks, they may suffer from stomachache.

We’ve reached the end of our article. I hope it was helpful for you to understand more about ducks and if they can eat watermelon.

Hopefully, you got what you came here for. Or maybe a few other things too. Now that you’ve read our article, we would love to hear your thoughts on the topic.

Thanks again for reading and have a great day!