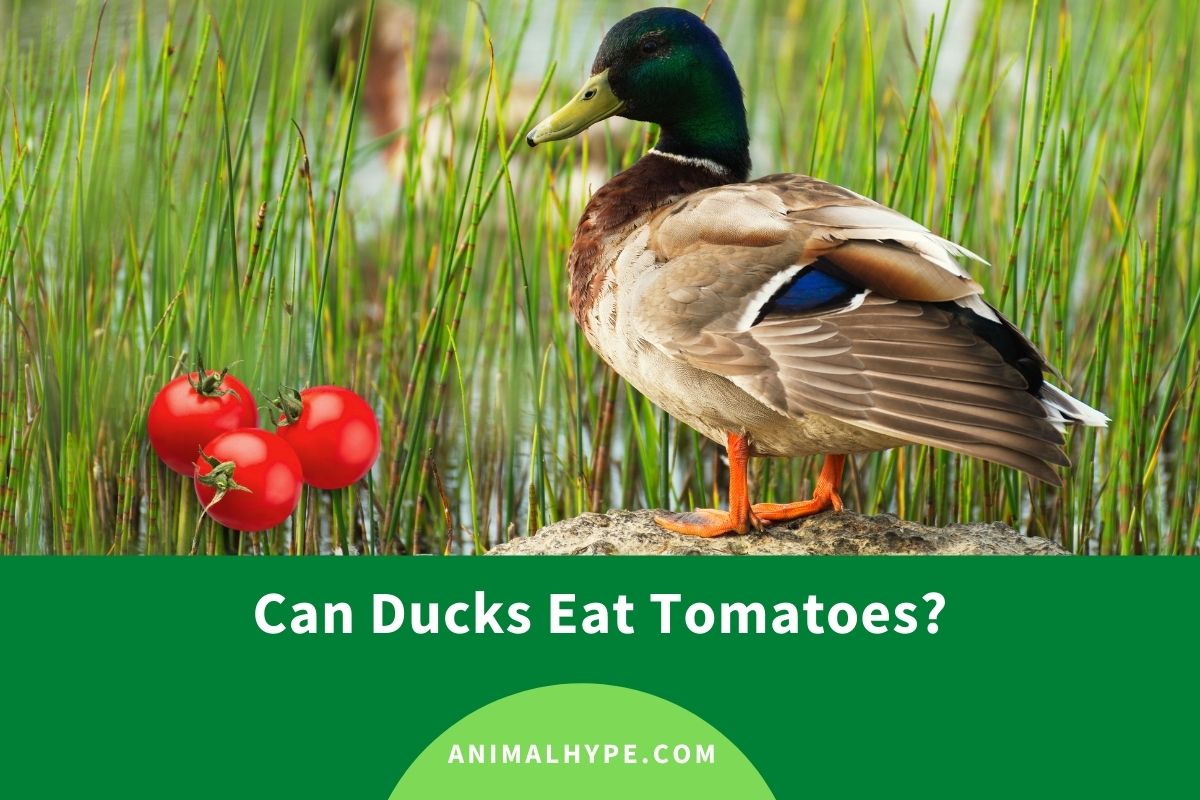 Although ducks are omnivores just like us, practicing caution while feeding them anything new is essential. If these birds do not consume a proper, balanced diet, it will adversely affect their health. Although fruits are a part of their natural diet, not all parts of all fruits are safe for their consumption. Take tomatoes, for instance. Let’s find out whether or not ducks can eat tomatoes.

Can ducks eat tomatoes? Yes, ducks can eat tomatoes. Most varieties of tomatoes are completely safe and nutritious for their health, including cherry and grape tomatoes. However, the other parts of the tomato plant, such as their leaves and vines, are lethal to these birds due to their solanine content.

In this article, we will explore various aspects of feeding tomatoes to ducks: their nutritional value, varieties that are safe for ducks, risks involved, feeding ideas, and more.

While most people love tomatoes for their tangy taste, there are some who are not very fond of these fruits. What about the ducks? Do all of them like eating tomatoes? The answer to this question depends on the individual taste of a duck.

While most ducks would eat tomatoes without any trouble, some might not even touch them. If your ducks have taken to liking these fruits, it’s great. However, if they do not seem to like it, that’s alright, too. You can always pick another fruit as its substitute.

Are Tomatoes Healthy For Ducks?

Once you’re certain that your ducks do not mind including tomatoes in their diet, the next step for you should be to learn about their health benefits for your pets. Do tomatoes meet their nutritional requirement?

In order to answer that question, we’ll do a quick scan of the nutritional composition of tomatoes from the table below:

Tomatoes are loaded with a number of micro as well as macronutrients. Now, we’ll learn how many of these can make your ducks healthier:

We hope that all the pointers we’ve discussed above must be enough to convince you about tomatoes being healthy for your pet waterfowls.

What About Tomato Seeds? Can Ducks Eat Them?

If you have ever eaten a tomato, you must have noticed small, beady yellow seeds inside them. There are so many of these seeds inside the fruit that is often difficult to count them.

While we do not remove these seeds for eating or cooking tomatoes for ourselves, what about our feathered pets? Can they eat these seeds just as safely? Yes, they can.

Unlike the seeds of other fruits (that contain toxic compounds), the tomato seeds are completely harmless and can, thus, be safely consumed by the ducks. Moreover, these seeds are also far too small and soft to pose a choking hazard for them.

The first and foremost thing that you should be careful about before feeding tomatoes to your ducks is to check whether the fruit is properly ripened or not.

Now, most people think that birds and animals can safely eat fruits and veggies, even if they’re a little unripe. And it is true for most fruits and vegetables, just not for tomatoes (as well as the other members of the nightshade family).

The tomato plants, along with other nightshade plants, contain a glycoalkaloid poison called “Solanine”, which keeps all kinds of pests away from their fruits. For some reason, solanine is only present in the green parts of the plants, such as the leaves, stems, stalks, and even the fruits that are not fully ripe.

Apart from insects, solanine is also believed to have an adverse effect on the health of animals and birds, including humans.

Since the unripe tomatoes are green, it means that they contain solanine, which can be lethal to your ducks, causing nightshade toxicity in them. This is why unripe tomatoes should not be fed to ducks.

Can Cooking Unripe Tomatoes Get Rid Of Their Solanine?

It is an age-old myth prevalent among people that if you cook the unripe tomatoes, their solanine content gets dissolved, thereby making them safe for the consumption of birds and animals. However, there is little truth to it.

While boiling unripe tomatoes does dissolve the solanine in them to some extent, it is not enough to make the tomatoes safe for your pets.

Therefore, instead of trying to make green tomatoes safer for your ducks, you should simply purchase the ones that are already fully ripened.

Can Ducks Eat Tomatoes With Their Calyx?

As we discussed in the previous section, all green parts of the tomato plant are rich in solanine and should, therefore, never be fed to your pets. This includes the calyx as well, which is why we recommend you to remove the calyx from the tomatoes before feeding them to your ducks.

The same is true for the leaves, stem, stalks, and other green parts of their plant; all of them are off-limits for your ducks.

Is It Okay For Ducks To Eat Cherry Tomatoes?

Cherry tomatoes have been obtained by the cross-breeding between the garden and the wild-currant tomatoes. These are much smaller than the regular tomatoes (about the size of our thumb tip) and are most often used for garnishing salads and pizzas.

If you want to feed these tomatoes to your ducks, you can do so by all means. Not only are they safe for your pets, but they’re also hassle-free (since you needn’t slice or chop them for your pets).

What About Grape Tomatoes? Can Ducks Eat Them?

Grape tomatoes are not very different from cherry tomatoes. In fact, both of them have a similar taste and nutritional value.

Most people who have baby ducks as pets are anxious about their dietary needs. If you are one of those pet parents, there’s no reason for you to worry, since there is little difference between the diet of a baby and a fully-grown duck.

As far as tomatoes are concerned, baby ducks can eat them as safely as their parents. However, if you have these babies at home, you should try to feed them grape and cherry tomatoes instead of the regular ones. This is because they’re much smaller in size and can, thus, be eaten very easily by your little pets.

So, can ducks eat tomatoes? They certainly can, as long as the tomatoes you are picking for them are fully ripened and have no green parts. All the green parts of tomato plants (including the fruit) are rich in solanine, a glycoalkaloid toxin that can prove to be detrimental to your pet’s health and should never be fed to them.