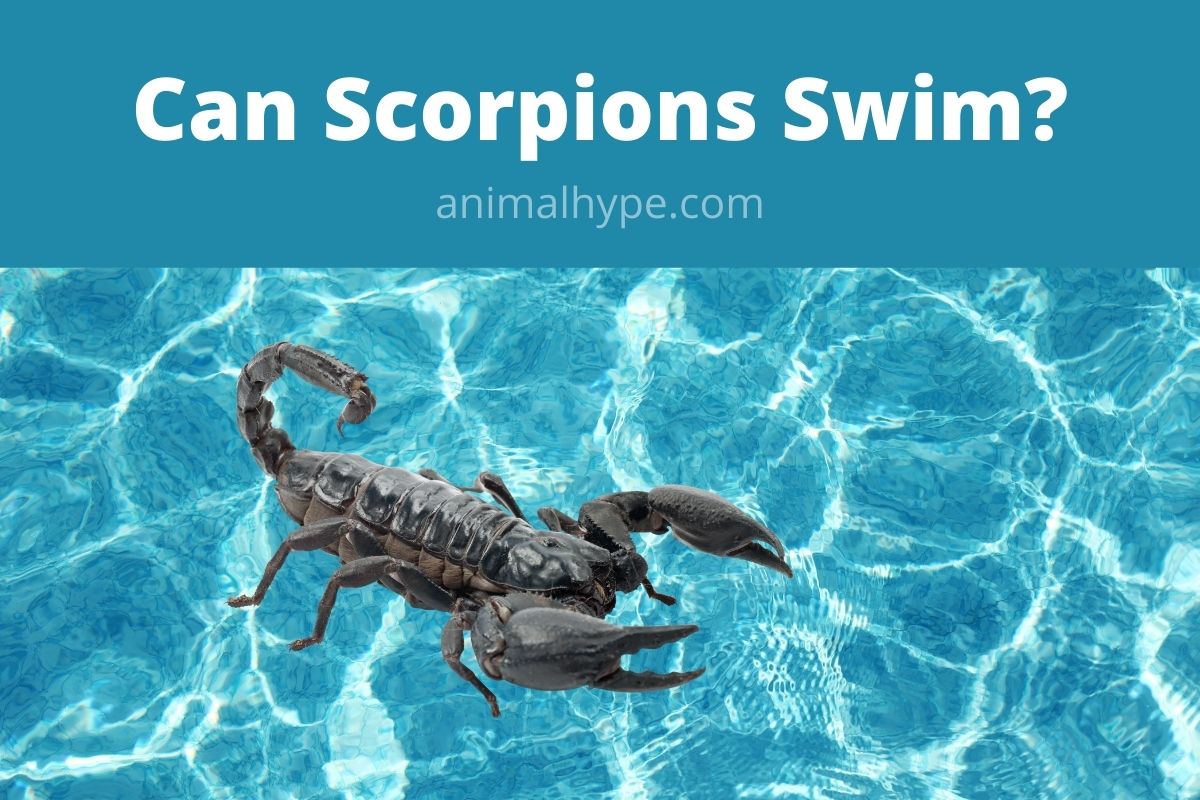 I was sitting around with a friend one night recently, talking about random stuff. It wasn’t until I finished the beer that I realized to this day I still don’t know if scorpions can swim or not. And let’s face it, asking whether a scorpion can swim is definitely scientific—the experiment had to be done. Here are the findings.

Can scorpions swim? No, Despite being arachnids with eight legs, scorpions cannot swim. Scorpions don’t have lungs so they breathe through the pores on their exoskeleton. The stored oxygen allows them to survive for up to two days in water. Scorpions are terrestrial creatures and prefer dry environments.

Scorpions are not amphibians and cannot swim. However, they can hold their breath underwater for several days, allowing them to survive being trapped in a pool or puddle.

While these arachnids can climb up and down the walls and even jump or leap on occasions, swimming is not their strong suit. Although they can survive in the water for about 48 hours, once all the oxygen in their body has been used up, they are bound to die.

All of us know that scorpions are a group of predatory arachnids known for their venomous sting. Does the idea of these little crawlers climbing into your pool terrify you? If it does, you needn’t worry, for we will discuss the possibility of swimming scorpions in this article.

Before we answer this question, let us tell you a little about the natural habitat of the scorpions.

Most scorpions are what we can call “xerocoles,” a term used for animals suited to living in the desert. However, most of them have adapted to living in other terrestrial habitats, mountains, caves, and even urban settlements. While some species are ground-dwelling, others prefer to live on trees, sand, or rocky regions.

Most scorpions like living in dry regions except for some species that prefer to live on islands and alongside rivers. When it comes to water, scorpions like it as much as any other living organism dependent on it for survival.

Are scorpions attracted to pools?

Although scorpions are not particularly attracted to pools, you might occasionally find them venturing near pools or bathtubs.

There can be several reasons behind it, the most common one being a food search; there are often small bugs and insects for them to eat in the water. During summers, even the need for hydration can draw them to your pools.

Therefore, if scorpions are spotted in your neighborhood, we would strongly recommend you check your pools and tubs for them before getting inside.

Are scorpions built to swim?

Although some studies claim that some ancient scorpion species inhabited the seas and oceans, the scorpions that live around us today are primarily terrestrial. And as terrestrial arachnids, they are not equipped to swim.

One look at these arachnids will tell you that they’re not built for swimming.

They don’t have a streamlined body or fins to help them swim gracefully in the water. However, if they’ve fallen into the water somehow, they might somehow manage to get themselves out. But that is just a survival instinct, not swimming.

Moreover, some scorpions are better at moving inside water than others and can easily get out of it independently.

Most of the birds or animals capable of floating can do so because of their feathers, wool, or body hair. It is because their feathers or hair can trap air inside them, allowing them to stay afloat in a water body for a while. While chickens will start drowning pretty quickly, the voluminous wool of sheep can sustain them for a longer period of time.

As far as the scorpions are concerned, floating is quite difficult for most species because they have nothing to sustain them. The only exception to this can be the scorpions belonging to the Hadrurus genus as they can float on water for short durations. Their large and hairy bodies characterize all 7 recognized scorpion species in this genus.

The Arizona Desert Hairy Scorpions (Hadrurus arizonensis) are an example of a hairy scorpion species.

However, even the hair of these scorpions cannot keep them afloat for long. If they are not aided by someone or try to get out by themselves, they could start drowning within minutes.

Can scorpions survive a fall into the water?

If a scorpion falls into the water, the main factor on which their survival would be dependent wouldn’t be the water but the height from which it falls.

Although scorpions are the toughest among all the other arachnids, if they’re falling from a considerable height, there’s a chance they might not survive it.

With that being said, some species are larger than others and survive falls without any trouble. The stage of their lives plays a key role in their survival as well. Younger scorpions are smaller and more fragile than adults. If a juvenile and an adult scorpion falls into the water from the same height, the adult is more likely to survive.

However, if their fall isn’t high enough, most scorpions will certainly survive it and manage to drag themselves out on dry land.

For how long can scorpions stay alive in the water?

It might come as a surprise to many of you, but although scorpions cannot swim, they can still easily survive underwater for over 48 hours. But how can these arachnids pull it off? Can they breathe underwater?

Before we begin to talk about scorpions breathing underwater, do you know how they breathe?

Scorpions have four pairs of book lungs (a respiratory organ found in air-breathing arachnids like scorpions and some spider species) located in the underside of their belly, which helps them breathe. Since lungs can only draw oxygen from the air and not water, scorpions can not breathe underwater.

But if these little guys can’t breathe underwater, how can they survive 2 days inside the water? By holding their breath. Scorpions have the ability to hold their breath for up to 48 hours without causing any harm to their internal organs.

This is how staying underwater for an extended period of time is not as scary a prospect to them as it might seem to other air-breathing animals.

While scorpions might not have mastered the ability to swim, they’re crafty little creatures that will not go down easily, especially not by drowning in water.

Even if they are submerged in the water for longer than 48 hours, they cleverly close all the 8 openings present in their body to trap all the oxygen they have inside. Meanwhile, they will keep moving towards the edge of the water to escape.

However, if you have trapped a scorpion purposefully inside water for longer than 3 days, giving them no opportunity to escape, they will ultimately die.

If you’ve ever wondered whether scorpions could swim or not, now you know. In fact, they can survive for up to 48 hours in the water but they cannot swim. It’s helpful to know this when you encounter a water-filled ditch, pool, or even your bathtub.

Not even the mightiest scorpion can withstand the depths of the sea, but that doesn’t mean it won’t survive for a while if accidentally dropped in freshwater.

And that brings us to the end of our article! Wow! You made it to the end! I’m so impressed.

Thanks for reading. I hope you found it helpful, entertaining, or both. If you liked it, let me know and I may add more scorpion facts next time.