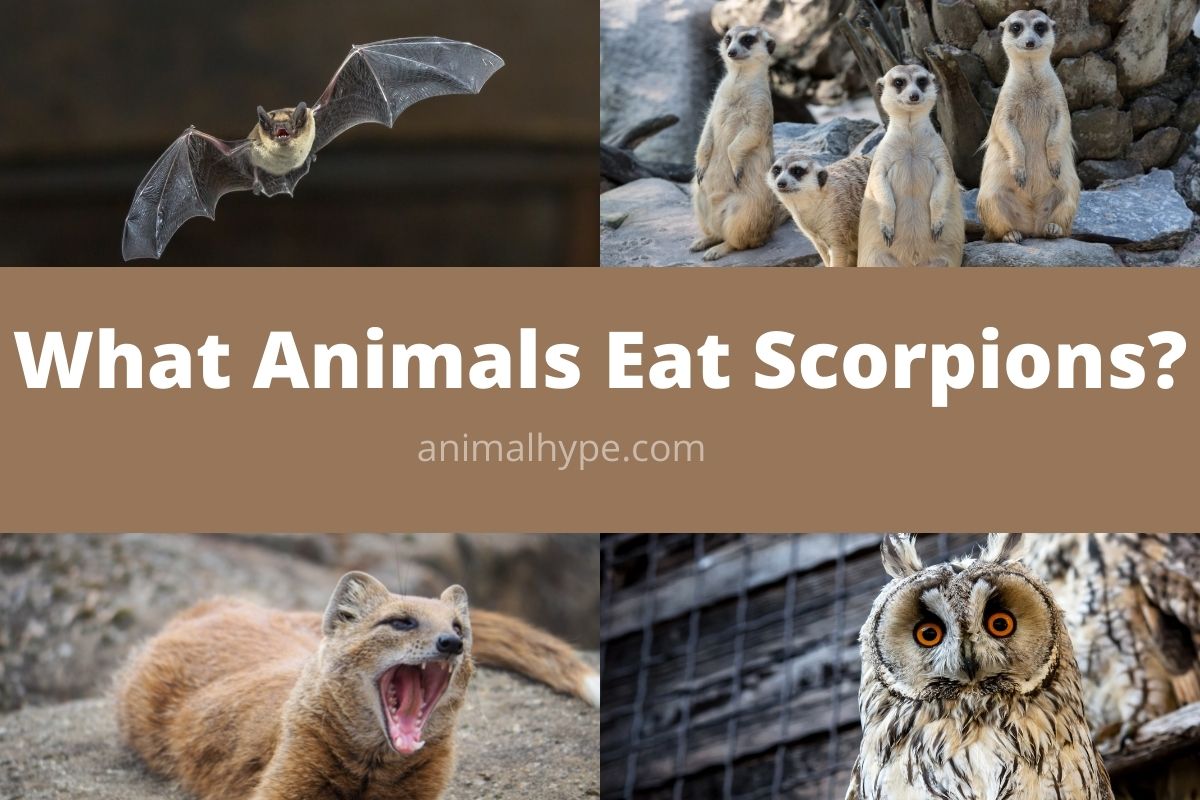 Exterminate your fears of scorpions with this charming guide. Scorpions—both real and fictional—are some of the world’s most fascinating but hated creatures. Learn everything you need to know about scorpion predators in this insightful guide that is packed full of facts and important information for nature enthusiasts, animal fans, and anyone interested in learning more about scorpions.

Scorpions have a wide variety of predators. Scorpions are preyed upon by giant centipedes, tarantulas, mammals such as meerkats, pallid bats, shrews, grasshopper mice, birds particularly hornbills and owls, and reptiles in particular geckos, toads. Humans also consume scorpions in some parts of the world.

Mammals like shrews, meerkats, bats, and grasshopper mice, birds, particularly owls, reptiles, tarantulas, and centipedes, are all the natural predators of scorpions.

Scorpions are part of the arachnid family, but they aren’t spiders. The scientific term for scorpion is “arachnid,” and that covers both spiders and scorpions. So let’s start with them.

Scorpions can be found on every continent except for Antarctica.

They feed on insects, other arthropods, birds, small mammals, reptiles, amphibians, and even other scorpions! They catch their prey with their claws and sting it to death with their venomous stinger.

And they have a special organ in their bodies that pumps out the poisons from the stinger so they don’t have to keep pumping it out every time they sting something.

They have evolved to become a very efficient predator of bugs and insects, but that doesn’t mean they aren’t eaten by other predators. In this article, we are going to talk about the animals that prey on scorpions.

Mammals that prey on Scorpions

Also referred to as “Suricate” due to their binominal name, the meerkats are small, primarily insectivore mongoose species that belong to southern parts of Africa.

They have a slim-built body with a relatively broad head, large, somewhat bulging eyes, and a pointed snout. The legs of the meerkats are quite long, along with a thin, tapering tail. Their soft fur coat ranges from yellowish-brown to grey in color, with alternate light and dark bands on their back that are not well-defined.

Although they display no prominent sexual dimorphism, some dominant females are heavier than their male counterparts. Meerkats are highly social mammals that often live in packs of roughly 30 individuals.

Although they mostly feed on beetles, butterflies, and moths, that’s not all their diet comprises. They also feed on some species of frogs, toads, salamanders, lizards, and their eggs. Small birds like the Ant-eating Chat (Myrmecocichla formicivora) and plant materials like seeds, fruits, and berries are also a part of their diet.

Lastly, arthropods, particularly scorpions, are also consumed by them. Meerkats possess two qualities that help them in preying on the scorpions.

Closely related to the Van Gelder’s Bat (Bauerus dubiaquercus), the Pallid Bats are a vesper bat species that are the only members of their genus.

Compared to most microbats, these bats are considerably large with long, forward-pointing ears and a blunt snout, much like the pigs. The fur coat covering their upper body is pale at the roots but grows brown on the edge; on their undersides, they possess a lighter fur coat.

There is minimal sexual dimorphism seen in these bats, with both sexes appearing almost the same.

Pallid Bats are insectivores that consume about half their weight of insects every day. Being nocturnal hunters like most other species, these bats are basically gleaners that catch insects from the ground, taking them to their roost for eating later in the night.

Pallid bats are also known for being a major predator to the Arizona Bark Scorpions (Centruroides sculpturatus), a North American scorpion species known for being highly venomous. While the venom of these scorpions is said to be fatal to even humans, there is a mutation in these bats that makes them immune to their venom.

Shrews are a family of small mammals that look somewhat like moles in appearance. All true shrews belong to the order of Eulipotyphla, with their family consisting of over 385 shrew species, divided into 26 different genera.

Being small creatures, the shrews are no larger than a mouse, with the Asian House Shrew being the largest shrew having a 6 inches-long body and the Etruscan Shrew being the smallest, at a body length of 1.4 inches.

While their vision is generally poor, they have a well-developed sense of smell and hearing, which helps them hunt for food.

Some shrew species are herbivores, others feed on insects. It is these insectivore shrews that prey on the scorpions.

Although these mammals are not immune to scorpion venom, they have surprisingly fast reflexes that help them fight against these arachnids. They skilfully diffuse all attacks of the scorpions until they can find an opportunity to sink their sharp teeth into the body of their opponents.

Following are some of the shrew species found in the Americas:

Grasshopper Mice are a group of carnivorous mice belonging to the genus Onychomys found in North America.

There are 3 species in this genus, namely:

All three of these mice are known for their tendency to prey on highly venomous insects and arthropods, not because they’re immune to venom but because of their aggressive nature.

The Southern Grasshopper Mice, usually found in the deserts of the southwestern United States, are also known as “Scorpion Mice” because the Arizona Bark Scorpions are their primary diet.

Like the shrews, these mice can move swiftly and bite the scorpions repeatedly while swiftly dodging their attacks.

Birds that prey on Scorpions

Owls are a nocturnal family of birds of prey that belong to the Strigiformes order. Their family can further be divided into 2 subfamilies: one of the True Owls, and the other of the Barn Owls.

With over 200 recognized species, owls can be found in most parts of the world, except remote islands.

Although owls appear to be far less deadly than the other raptors, they are gifted hunters with camouflage plumage, binocular vision, a heightened sense of hearing, sharp claws, and powerful talons.

Moreover, their feathers are adapted to silent flight, which is they their prey would never see them coming. Mammals, insects, fish, and smaller birds are all parts of an owl’s diet.

Following are some of the North American owl species that prey on scorpions:

Inhabiting the savannahs and woodlands between Kenya and South Africa, these hornbills are considered the world’s largest hornbill species.

Southern ground hornbills are large birds that display sexual dimorphism in terms of their body mass, with the males being about 1.5-2 kgs heavier than their female counterparts.

These birds have an overall black appearance, with black plumage, bill, and feet, except for a bare, red patch of skin on their face and throat. They also have white secondary feathers that are only visible during flight.

As their name suggests, these hornbills are ground-forages that would feed on insects, snails, reptiles, frogs, and mammals as large as hares. Scorpions are a part of their diet as well.

Reptiles and amphibians that prey on Scorpions

The Western Banded Geckos are a North American gecko species found throughout the southwestern parts of the United States.

These medium-sized, terrestrial lizards usually have sand-colored skin with broken crossband patterns drawn all over their back.

The western banded geckos are solitary and nocturnal hunters that spiders and small insects when it comes to food. The baby scorpions are also an essential part of their diet, which is why they’re crucial in controlling the scorpion population.

The Cane Toads are a large, terrestrial toad species known by names like “Marine Toads” and “Giant Neotropical Toads.”

Although these toads are endemic to the Central and South Americas, they introduce species in northern Australia, Oceania, and the Caribbean.

Cane toads have dry and warty skin and are sexually dimorphic in size, with the females being much larger in size than the males. Their skin color ranges from grey to yellowish to red to olive-brown, with creamy underparts blotched with brown and black.

Cane toads are omnivorous and can feed on a large range of invertebrates, small rodents, reptiles, other amphibians, and even small bats, as well as plant materials.

These toads have toxic skin and several bufotoxin-releasing glands, which they use as a defense mechanism against their predators. It is these toxins with which they infect scorpions before feeding on them.

Other predators of Scorpions

Although scorpions are a large family of predatory arachnids, they have many enemies of their own as well.

The Tarantulas are a large group of mostly hairy spiders that belong to the Theraphosidae family. There are over 1,236 recognized tarantula species globally, some of which are also kept as exotic pets.

Being predatory spiders, they possess powerful chelicerae with long fangs made of chitin, which they use to kill large arthropods like the scorpions.

Apart from the scorpions, centipedes, millipedes, other spider species, and large insects are all part of their diet.

Found in South America and the Caribbean, the Amazonian Giant Centipedes are one of the largest centipedes of the world, capable of growing up to the length of 12 inches.

Amazonian giant centipedes are lethal carnivores that can easily overpower animals much larger than themselves.

Most of us consider scorpions to be dangerous creatures because of their ability to sting us with venom and try to stay away from them. However, these arthropods are consumed as food in many parts of the world.

Although the practice of eating scorpions might have begun in Asian countries like China and Vietnam, you can also find them in various states of the United States, such as California, New Mexico, Arizona, and other southwestern states.

Not only are scorpions rich in protein like the other edible insects, but their taste is also compared to that of the crabs or shrimp.

While in most places, the stinger of these arthropods is cut down before cooking them, in China, it is usually left on. It is because many Chinese legends believe that eating the stinger has several health benefits.

No one likes scorpions. The creepy arachnids have long been a silent scourge in the desert, ruining picnics and settling into crevices in our homes and workplaces.

It’s surprising that we hadn’t done a blog post on this topic yet, and to tell you the truth we have been pretty selfish with some of the other great animal-related articles on this blog. I mean, who wouldn’t want to know what eats scorpions?

You might think something as difficult to kill as a scorpion is impossible to eat. But you’d be wrong. The animals listed above can actually consume scorpions without harm. Although most people wouldn’t want to, they at least know what eats scorpions and won’t panic (too much) if one ends up in their home.

Before I end this article, I just wanted to thank you for reading it. I know it was lengthy — but hopefully, it was useful and educational as well. I hope you found it interesting and not too scary (we know your kids love a good scorpion story).

Thanks again for your time!