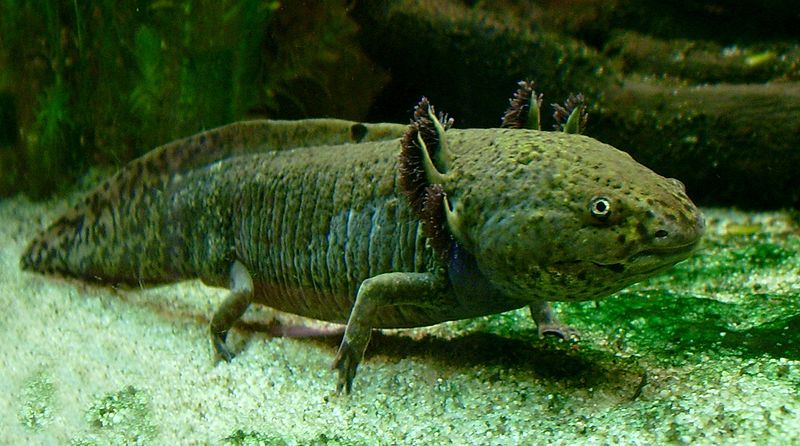 The name axolotl was first given to a dark, yellow-spotted, gilled salamander found in some lakes around Mexico City.

At the time it was named, it was thought that the creature spent all its life in the water and it was considered to be a normal species of salamander until around 1865. About this time, several specimens were received in a zoological garden in Paris.

Shortly after their arrival, an interesting series of events occurred.

The axolotls mated; laid eggs which duly hatched into small gilled salamanders-thus far all normal enough. Then a peculiar thing happened. Some of the Young axolotls lost their gills, underwent a few other changes and came out on land.

Study revealed that these transformed axolotls were simply tiger salamanders, identical with or similar to a species common in many parts of the United States. But the disappointment the zoo director and his staff may have experienced in seeing a valuable exhibit transform into a very common species was more than compensated for by the intensely interesting discovery that the axolotl was actually the larval form of a well-known salamander.

The most amazing part of the whole discovery, of course, was the fact that under other environmental conditions these immature forms actually reproduced. In some regions, that is, the sexual organs of the axolotl become mature and capable of reproduction, though it retains all the other features of the larval forms. In other regions and this is what happened in the Paris Zoo-the larvae develop into tiger salamanders and come out on land before they reproduce. The process of reproduction in the larval form is so seldom encountered that it makes the axolotl one of the most amazing vertebrates in the whole animal kingdom.