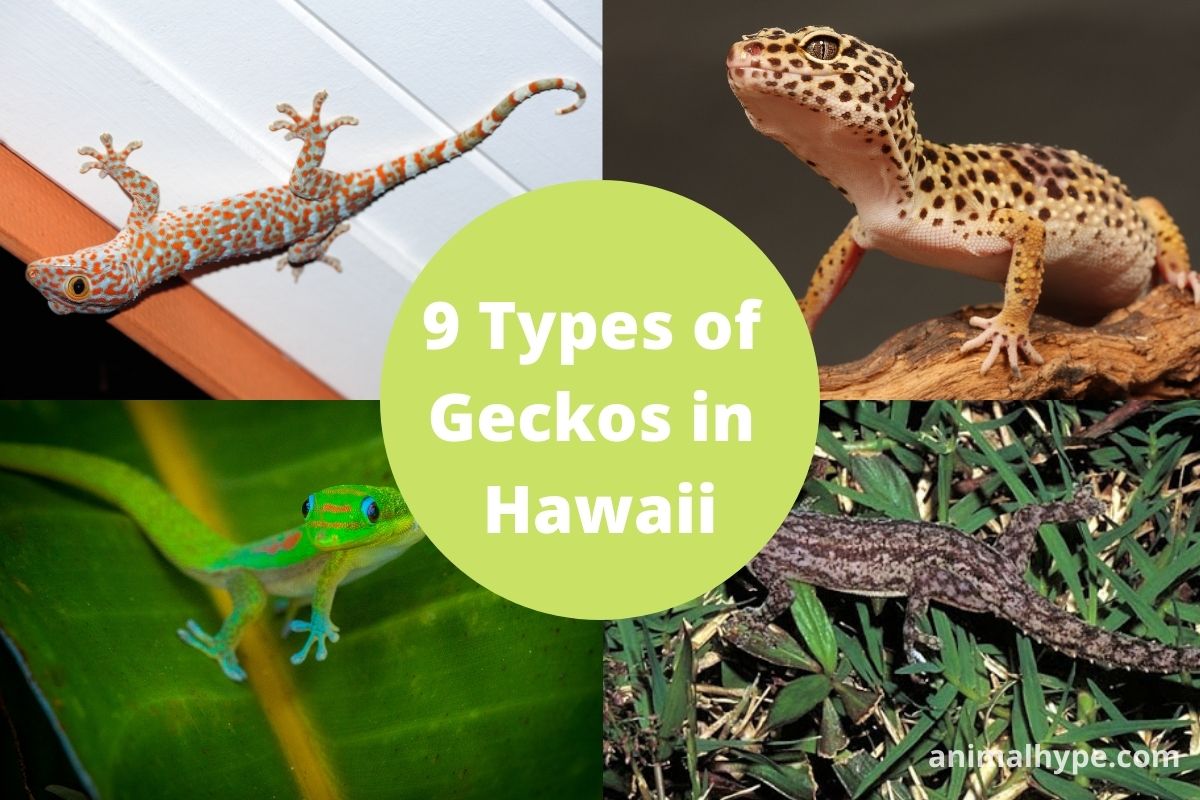 Primarily inhabiting areas with a warmer climate, the Geckos are famous among the reptiles for their unique vocalization, which is unique to each species. They are nocturnal and have a calm temperament. Many exotic pet enthusiasts are fascinated by these little lizards and keep them as pets for these qualities.

Geckos have the largest population in the whole of the lizard family, with over 1,500 different species found across the world. Nine of them are found on the islands of Hawaii. However, none of these are endemic to the island; they’ve all been introduced here. Here are the 9 types of geckos found in Hawaii:

In this article, we will read about all these gecko species in-depth and learn how to recognize them:

The Stump-toed Geckos are known by a lot of names such as “Sugar Gecko”, “Common Four-clawed Gecko”, “Butiki”, and “Pacific Gecko”.

They are a species of house geckos that are endemic to Australia and Southeast Asia. However, today they are found in many different parts of the world. In Hawaii, where they are considered invasive species, you can find them on the sand beaches.

These geckos stand out among the other house geckos because of their plumper appearance and more delicate skin, which is why they are also referred to as “Tender-skinned House Geckos”. They have body-color ranging from pink to purplish-grey. The juveniles have several golden spots scattered on their back, which slowly disappear as they grow up.

Stump-Toed geckos have a long head, with a moderately sized, sub-oval ear opening, slightly webbed digits, and an elongated body. Their throat is covered with small, granular scales that grow larger on their back. These geckos are fairly larger than the other house geckos and are, thus, easily identifiable.

Being house geckos, they don’t mind living around humans and are usually found on the ceilings or high walls in our homes.

Having originated from Southeast Asia, the Common House Geckos are a species of house gecko with the most widespread population, as their name suggests. They are also known as “Moon Lizard”, “Wall Gecko”, “Asian House Gecko”, “Pacific House Gecko”, and “House Lizard”. These geckos are used to living in humid climates and are, thus, tropical geckos.

They have a medium-sized light brown body and are well-adapted to living in the urban areas. Due to their nocturnal nature, they hide during the day and are seen venturing out, hunting for small insects at night. The best way to recognize them is by their chirping sound.

Although the Common House Geckos have a docile temperament, they can bite you if they feel distressed. Their bite, although it can pierce your skin, is non-venomous.

Also referred to as the “Common Smooth-scaled Gecko”, the Mourning Geckos are one of the most widespread gecko species in the world.

Although they are endemic to Southeast Asia and can be found in the Pacific and the Indian Oceans’ coastal regions, they have been introduced in Columbia, Chile, Mexico, Brazil, Guatemala, Nicaragua, Honduras, Ecuador, Panama, Costa Rica, and El Salvador.

Mourning Geckos have a tan-colored body with a brown strip running between their nose and ears and dark spots on their back. While most of the other geckos are nocturnal in nature, these are metaturnal and can be active at any random time of the day or night.

Moreover, they also possess the ability to tone the shade of their body color up or down, a trait that they use to blend in with their background.

The most striking feature about the Mourning Geckos is Parthenogenesis. In simpler words, it means that the females are not dependent on their male counterparts for reproduction and can produce eggs independently. But this doesn’t mean that their species only has females; there are males, but they are largely outnumbered and often sterile.

More commonly known as the “Madagascar Giant Day Gecko” due to their nativity to the tropical forests of Madagascar, the Giant Day Geckos are a species of day geckos belonging to the large genus of “Phelsuma”. Their genus name is taken after Murk van Phelsum, a Dutch physician.

Just as their name suggests, the Giant Day Geckos have an unusually large body by the standards of the geckos. Their body is usually colored in a bright green, with an egg-like yellow underside. Some individuals also have a bluish-green body, but it is very rare.

Between their eyes to their nostril extends a dark red stripe, with similar-colored markings scattered on their back. Some individuals have dots, while others have bars. The body of the juveniles is marked more heavily with red. But the marks begin to fade as they grow up.

The adult Giant Day Geckos possesses a large sack on their neck in which calcium is stored. The body color of these geckos changes when they are distressed; it turns into dark green, with the red markings turning bright orange. At times, it is observed that they feed on their younger ones. 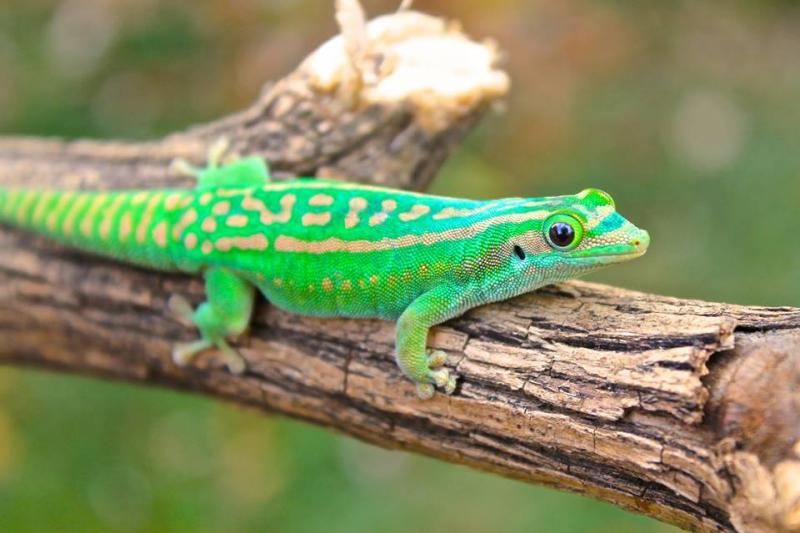 The Orange-spotted Day Geckos are a species of arboreal geckos that are endemic to Mauritius. They are an introduced species in Hawaii. These geckos are different from the other arboreal geckos because of their diurnal nature, which is rare among geckos.

Both sexes of the Orange-spotted Day Geckos are roughly about the same size, except the males’ snout-vent length is slightly larger than their female counterparts. Another difference between them is the occasional bluish tail of the males, which is never found in the females.

They have a primarily dark green body with a faint bluish spot located on their neck. From between their eyes originate three red lines that run vertically towards their back. While the two outer lines are uniform, the one in the center forms a loop near their neck and reduces into a dotted line afterward, extending to the end of their tail. Unlike their parents, the juveniles have a greyish-green body with white spots scattered all over it.

Orange-spotted Day Geckos are known to inhabit old large-leafed trees. And due to the mass deforestation of these trees, the population of these geckos is heavily declining, on the verge of extinction. 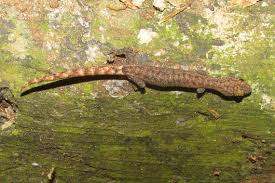 Found in Asia and the islands in the Pacific and Indian Oceans, the Indo-Pacific Tree Geckos are a gecko species that are also known by the names of “Common Dwarf Gecko” and “Indo-Pacific Slender Gecko”.

Although they have originated in Southeast Asia, now they can be found in almost all parts of the world, living preferably in warmer regions with a tropical or a subtropical climate.

There are many similarities between the Mourning Geckos and the Indo-Pacific Tree Geckos. Just like the former, these geckos are also capable of parthenogenesis, i.e., the females can reproduce independently of their male counterparts. As such, the female Indo-Pacific Tree Geckos have an exponentially larger population than the males. Moreover, they can also shift the tone of their body color in accordance with their surroundings.

The major difference between them is that Indo-Pacific Tree Geckos are slightly smaller in size than the Mourning Geckos, which makes them the smallest gecko species in Hawaii. Also, the color of their tail is always one shade lighter than the rest of their body. Moreover, these geckos are voiceless, a characteristic that is rarely seen among the geckos. 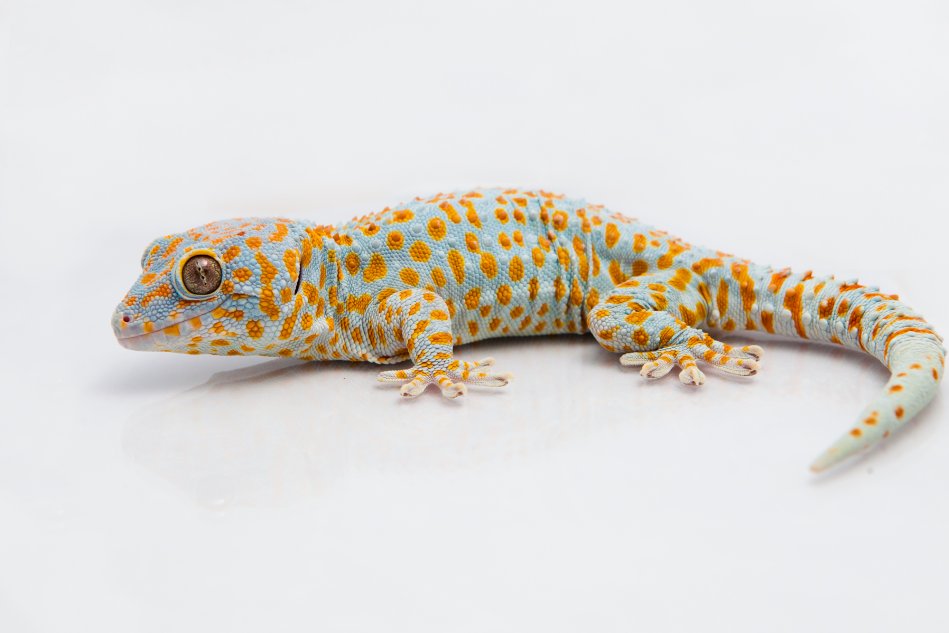 Endemic to Asia and some of the islands in the Pacific Ocean, the Tokay Geckos are a species of arboreal geckos belonging to the genus of true geckos. They are the largest gecko species you can find in Hawaii, and the second-largest in the world, second only to the New Caledonian Giant Gecko (Rhacodactylus leachianus).

The adult Tokay Geckos display sexual dimorphism, with the males being both larger and brighter than their female counterparts. Although their body is almost cylindrical in shape, it is somewhat flattened on the top.

They usually have a grey body speckled with red dots, but can change their color to blend in. Their head is rather large, with a muscular jaw, vertical pupils, and a robust built. They are also skilled climbers. The male Tokay Geckos produce a distinct mating call, often described as “token”, therefore, lending them their name.

Tokay Geckos are territorial and short-tempered, making them the most aggressive gecko species in Hawaii. These are not the kind that would hesitate to bite you, which is why it would be wise to maintain a safe distance from them.

Although they are very popular as an exotic pet, their biting nature makes them a rather unsuitable pet, especially for those who have never had reptiles as pets. 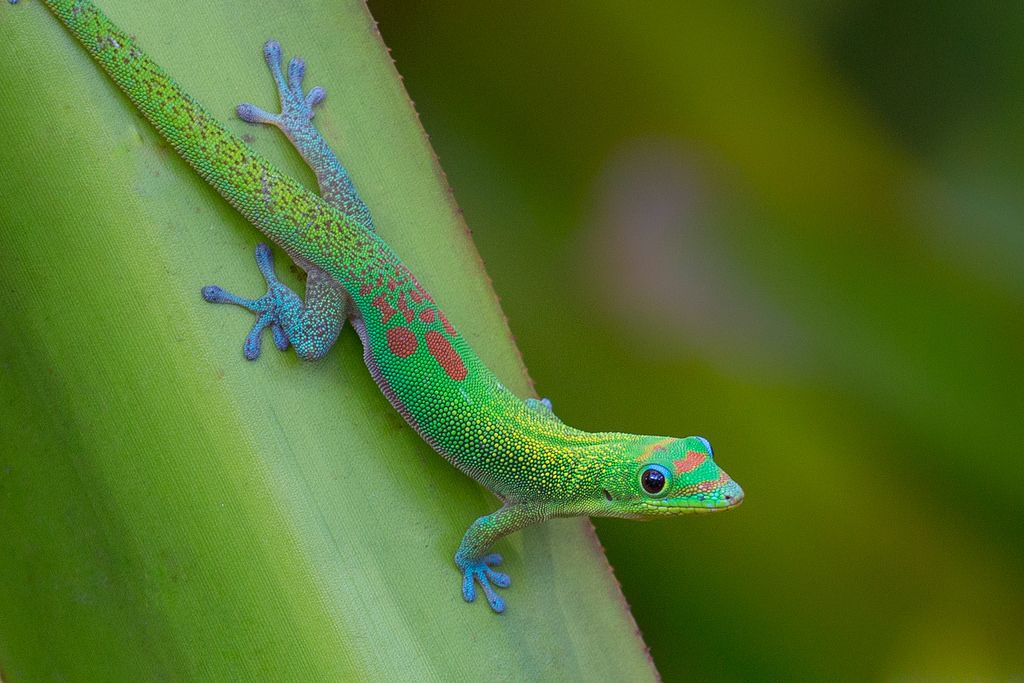 Popular as the mascot of the Government Employees Insurance Company (GEICO), the Gold Dust Day Geckos are a species of day geckos that are endemic to northern Madagascar and the Comoros island.

In Hawaii and other islands in the Pacific Ocean, these geckos are an introduced species. They preferably inhabit semi-arid forests and are most often found on the banana trees due to their right amount of moisture.

Gold Dust Day Geckos are among the smaller members of the day gecko family. They have a bright green or yellowish-green body, with some rare bluish specimens. Their body is also dotted with red markings on their neck and back, a trait typical of the day geckos.

Towards the lower end of their body, they possess three tapering red bars, leading to a rather flattened tail. Their undersides are off-white, with rust-colored bars on their snout and their eye’s upper skin being blue.

The temperament of the male Gold Dust Day Geckos is rather violent; they are aggressive and territorial and are quick to wound even the females that come too close in their private space. They easily pick a fight, which is why keeping them as pets is more complicated than the other geckos. 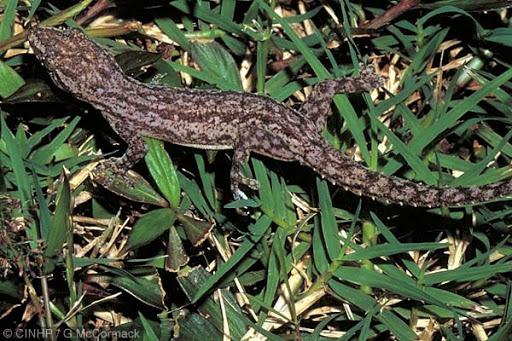 Like the Mourning and the Indo-Pacific Tree Geckos, the Fox Geckos are another species of parthenogenetic geckos found in Hawaii. They are known by several different names, such as “Assam Greyish Brown Gecko”, “Indo-Pacific Gecko”, and “Garnot’s House Gecko” in honor of Prosper Garnot, the French naturalist.

These geckos have brownish-grey upperparts combined with whitish underparts. They have smooth skin all over their body except for their tail, covered with spiny scales on its lateral edges. On their back are brownish and whitish spots scattered. These markings acquire a translucent shade in darker areas. They are diurnal and hunt for insects and small invertebrates at night.

By now you might think you know everything about Geckos, but the following facts will blow your minds:

As we’ve mentioned before, the Geckos are popular as exotic pets in different parts of the world. Although these little reptiles are relatively easy to care for than the others and need little company or interaction to thrive, there are some things you must know about them before you get one for yourself:

Being the miniature versions of the lizards, the geckos might seem indistinguishable from them at first glance. However, the more you learn about these little reptiles, the easier it will be to recognize them.

All nine species of geckos that inhabit Hawaii have a unique and easily distinguishable body. Therefore, it is highly unlikely for you to get confused between them.

Some of them can change color, while others are can’t; some are parthenogenetic, while others have no voice. If you can just pick up a single unique trait about each one of them, you’ll never face difficulty in identifying them.