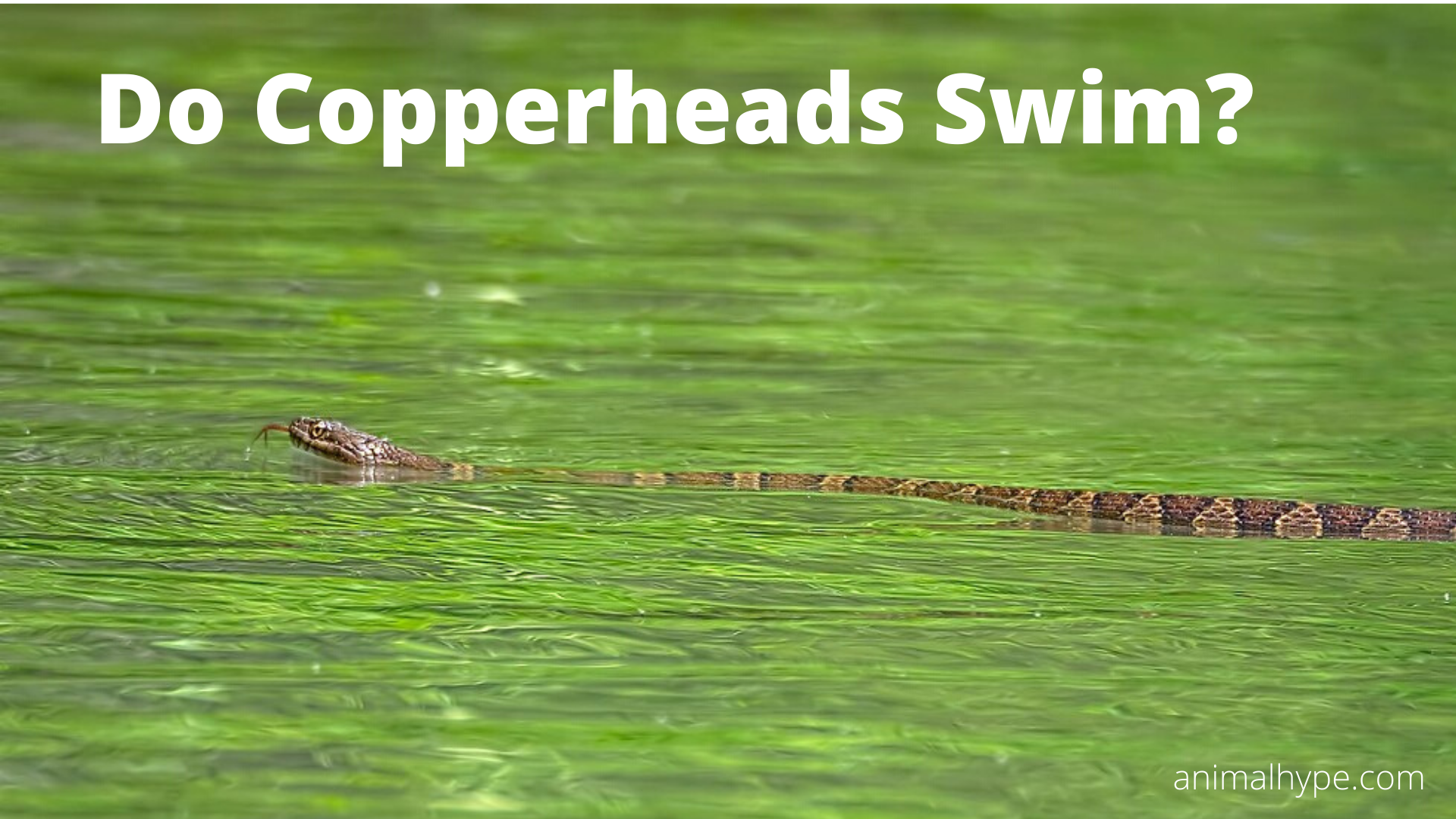 First thing first, all snakes can swim comfortably in the water. But then why are certain snakes labeled as water snakes while some are not?

Well, those snakes that are labeled as water snakes are commonly found to live near water bodies. Apart from this, water snakes do have the edge over the other snakes when it comes to swimming, which is their anatomy!

If you closely observe a water snake, you can see that they have more flattened sides than the others owing to which they swim more efficiently.

Now let us focus our attention on the copper head snakes. Are copperheads water snakes? Do copperheads swim?

So, do copperheads swim? Yes, copperheads are capable of swimming in water. Though these venomous snakes are not exactly water snakes, they are commonly found to inhabit regions close to water bodies. Apart from this, they are also found to go for a casual swim, which is a common trait seen among non-water snakes!

In this article, we will have an in-depth discussion on the copper snakes, their ability to swim, and many other interesting facts about them.

As said in the previous section, water snakes can be easily identified by their round head, a longer, slenderer body, and a less distinctive neck.

Most importantly, water snakes have more flattened sides when compared to copperhead snakes, and it makes the former excellent swimmers too. If you closely observe a copperhead, you can see that they lack all the distinct features of a water snake.

Copperhead snakes have more in common to water moccasins in appearance and behavior. Water moccasins, as their name suggests, spend most of their time in riverbeds and other water bodies because they prefer a wet environment than a dry one.

But unlike a water snake, they do venture out from the waterbody often.

Unlike a water snake, copperheads have blocky, heavy heads, and thick stocky bodies. Apart from that, they are venomous too.

Due to these reasons, even though a copperhead can spend time in the water, they are not considered to be water snakes. 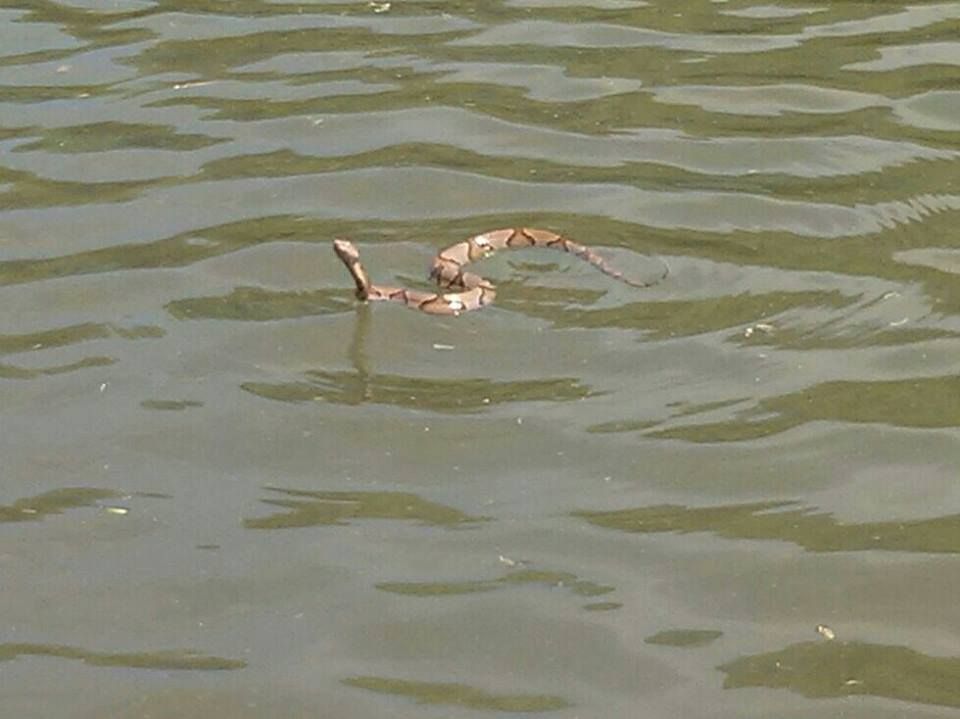 Yes, copperheads do swim underwater, but not always. Before we discuss more on a copperhead swimming underwater, it is important that you understand how snakes meet their oxygen demand underwater.

No species of snakes, including the sea snakes, cannot breathe underwater because snakes are land animals, and being a reptile, their breathing is pulmonary. Then how do the sea snakes survive underwater for a longer duration?

The answer lies in the evolutionary adaptation the sea snakes possess. These aquatic sea snakes have very long lungs compared to their cousins in the land. Their lungs are so long that they extend through almost the entire body length. Owing to which they have an increased lung capacity.

Apart from this, when the sea snakes dive, they have the capability to reduce their metabolic rate to reduce their body’s oxygen demand. Because of these evolutionary advantages, sea snakes can survive underwater for almost 5 hours. Beyond which, they will have to come to the surface to breathe.

Unlike their aquatic cousins, the land snakes do not have the advantage of having a long lung. But some of these land snakes can control their metabolic rate, which in turn helps them in reducing the oxygen demand.

Owing to which land snakes can swim underwater for around 30 minutes after which they must resurface to breathe.

But most land snakes, including the copper heads, do not swim underwater frequently, though they can.

To sum up, a copperhead snake can swim underwater, if they need to! But like any other land snake, they commonly swim, keeping their head above water.

Can a copperhead snake bite you in the water?

But most aquatic snakes and the land snakes that go for a casual swim tend to stay away from humans while in water. These snakes will only attack you only if they feel to be threatened or intimidated.

But how can snakes open their mouth underwater?

All snakes are adapted to open their mouth, bite, and even swallow while they are underwater. If they weren’t, how do you think the aquatic snakes survived?

The trick lies in the small opening at the top end of a snake’s trachea. This opening is called glottis, and it remains closed until the snake decides to breathe in or out.

Well, not just the glottis, sea snakes are also found to have a valve-like nostril that can open and close voluntarily. So basically, when a snake is underwater, its nostrils and entrance to the trachea are closed.

If copperheads are land snakes, why are they sometimes found in water?

As said earlier, copperheads have a lot in common with water moccasins in appearance and behavior. Due to this, some copperheads are found to often spend time in riverbeds or near other water bodies.

But unlike a water snake, they do not spend a lot of time in the water. In general, copperheads are found to live in woodland areas, round rocks, or near streams and ponds because of the availability of plenty of food sources.

Snakes, in general, spend more time in the water when it is time for their molt. This behavior can be observed mainly in snakes that are in captivity.

Copperhead snakes belong to the family of pit vipers, but their venom isn’t as deadly as the other members of the pit viper family.

Copperhead snakes are known to be extremely shy yet are responsible for more venomous snakebites than any other snakes in the United States. This is not because they are widespread in the US.

As said, the venom of a copperhead snake is not toxic enough to cause a serious threat to human life. Their venom is identified to be hemolytic, which means that it attacks the red blood cells surrounding the bite area.

This, in turn, causes localized rupture of the red blood cells causing temporary tissue damage. But yeah, its venom can be fatal to aged people, kids, and people with immune deficiency.

How can you tell a copperhead from a water snake?

It is very common to see most people getting confused between a copperhead and a water snake. Though copperheads aren’t as venomous to land a life-threatening bite, it can be quite painful.

In fact, the majority of the reported cases of a copperhead bite are because people misidentified a copperhead to be a water snake!

The easiest way to properly identify a snake is to look at its markings. A copperhead snake has dark-colored cross bands that resemble the shape of an hour-glass. Whereas, the water snake has a bulb-shaped pattern that is wider at the center.

Another striking yet easily identifiable difference between the two snakes lies in the shape of their heads. The copperhead snakes similar to the other venomous snakes have a pointed and broader head, whereas the non-venomous water snakes a slender head, which is almost of the same size as its body.

It is always better to stick to identifying a snake from its pattern because it is the easiest yet effective method!
All these being said, if you spot any snake, the best thing to do is walk away.

And if you find a snake in an area that can be a potential threat to you or your family, it is best to seek professional help. It takes a professional to identify a snake properly.