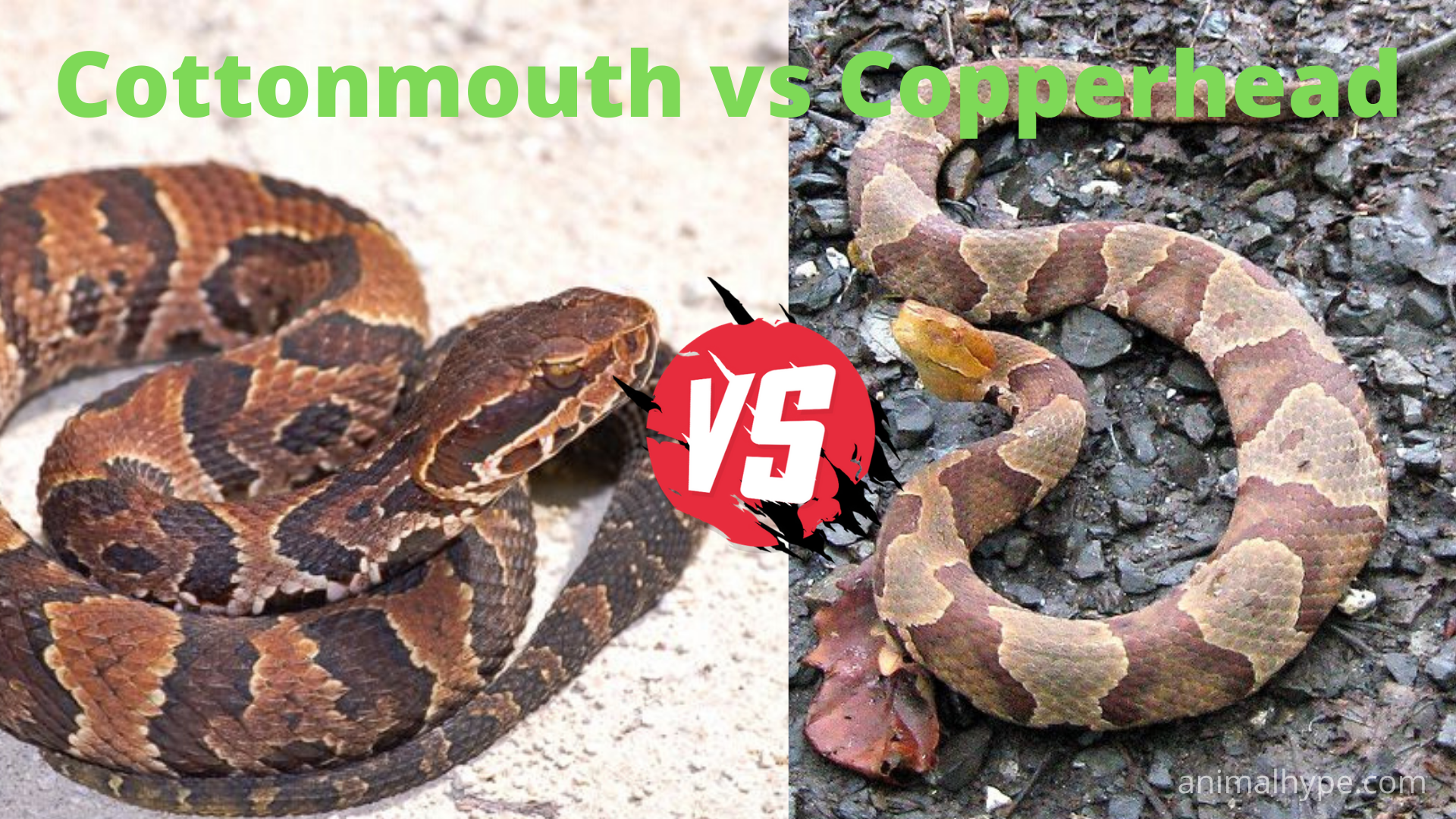 Snakes are legless, carnivorous reptiles with an elongated body that crawl their way in nature. They belong to the Reptiles suborder of Serpentes. There are around 2,900 species of snake located almost all over the world.
Cottonmouth and Copperhead are two snakes who account for venomous snakebites.

People often get confused between both of these snakes and as a result cannot precisely identify the snake species. In this article, we’ll show the differences between cottonmouth and copperhead snake so that it’s easy for you to identify next time you spot one of them.

So, what is the difference between a cottonmouth snake and a copperhead snake? A Cottonmouth has a triangular head, a thick body, and its venom is dangerous. They mostly live in water, i.e., they are semiaquatic. They attack when they’re vulnerable. A Copperhead has a copper-red head. Rocky, wooden areas, mountains, etc. are their places to live. They do not live in water. Their venom is mild but causes a lot of pain. Copperheads bite under threat.

Misidentification of the two

Cottonmouth and Copperhead snakes, even though they have dangerous venoms, the most potent venom is that of Cottonmouth. Copperhead and younger cottonmouths are brown, so a younger Cottonmouth is assumed for a Copperhead.

Assumption of a Cottonmouth, Radiated Rat snakes, Sharp-nosed pit vipers for a Copperhead happens, because of the copper-red head that they have. However, the Copperheads in North America are different from other Copperheads, a non-scientific name given to those outside the region of North America.

Cottonmouths are 3 to 48 inches long when they gain maturity. The male Cottonmouths are more extended than females. The color ranges from brown, black to having yellow bodies with darker crossbands, with a darker color in older ones. A dark band on their face across the eyes is prominent.

Copperheads are about 24 to 36 inches in length. They are thick-bodied and have copper color heads and red bodies with light brown crossbands.

Female Copperheads are more extended than males. Younger Copperheads have greyish bodies. They have a pinkish mouth. Copperheads do not have a dark band on their faces.

Cottonmouth snakes live in the South-eastern United States of Southern Virginia to Florida and Eastern Texas. Another name for them is Water Moccasins, as they swim in marshes, drains, swamps, and the corners of small water bodies, like ponds, lakes, and streams.

They are semi-aquatic reptiles, i.e., they live in both water and land. On land, they live in fields near water. They indulge in sunning themselves while they’re on branches or trees or stones near a water body.

Copperheads live in Southern New England to West Texas and Northern Mexico. Copperheads are not water snakes, like that of Cottonmouths, and they are fond of ecotones. An ecotone is an area where two biological communities meet.

They like rocky wooden regions, mountains, canyons, and other natural environments. At times, they live in wood, sawdust piles, and junkyards in old construction areas in Suburban areas. Like how the Cottonmouth seeks shelter in water, they seek refuge under surfaces like boards, logs, large flat rocks.

Copperheads have a more extensive range than the Cottonmouths, i.e., they have five sub-species. Northern, North-western, Southern, broad-banded, and Osage Copperheads are those species. They extend from Northern Florida to New England.

Cottonmouths are aggressive, but it is a rare case where they bite humans. While a lot of venomous snakes flee from threats, this snake stands their ground and doesn’t escape.

When Cottonmouths feel danger around them, they coil their bodies and open their mouth wide, exposing the white color of the mouth inside.

The white color is visible quite clearly in those Cottonmouths whose body color is black or dark brown. This defense mechanism acts as a warning to potential predators.

Copperheads flee their area when they sense a threat and do not bite humans and, in fact, avoids them in its entirety. They are not as aggressive as Cottonmouths. However, they often freeze when exposed to a threat, and instead of slithering away like other snakes, they do not move.

Humans, however, maybe bit by Copperheads during this time when they unknowingly stamp on the frozen Copperhead. They only strike at humans when they touch them.

They camouflage when they freeze, hence when they lie on dead leaves or red clay, it is impossible to notice the presence of a snake. This species vibrates its tail 40 times per second that’s faster than almost all non-rattlesnake species.

The difference in their diet

Cottonmouths are not picky eaters. Fish, amphibians, birds, rodents and other snakes are their food. They use their venom to kill their prey. They feed on the flesh of even dead animals without hesitating. They are cannibalistic. The skins are shed in according to how much they eat, several times a year.

Adult copperheads eat mice, small birds, small snakes, lizards, and amphibians. Younger Copperheads feed on insects, and they use their yellow-topped tail to lure and attract prey. It is “Caudal Luring.”

Cottonmouths use two hunting methods, traditional and lie-in wait method. A conventional way of hunting is where the Cottonmouths look at the prey and chase it to catch hold of it.

The lie-in-wait process is when the snake hides in a place and waits for the victim to come close to it, so it can leap on it and bite it.

Baby Cottonmouths wiggle their tails to lure frogs into believing that they’re worms. The bite of a Cottonmouth is deadly, and they eat their prey first and release it after the venom is inside the victim. In case the animal wanders off after venom is released, the Cottonmouths track the smell and hunt it after it dies.

A copperhead gets its prey by the sit and wait, ambush method. At times, they also use their heat-sensing pits to find prey. When they attack larger prey, they bite the prey and release it.

The venom is then traced to the animal’s last location after it has died. In the case of smaller prey, the copperheads hold the victim in its mouth until it dies.

They swallow the food wholly since they have flexible hinged jaws that allow them to consume a meal quickly. An average adult copperhead feeds on 10-12 meals per year, and that depends exclusively on the size of the meals.

Venom and its toxicity

Cottonmouths possess deadly venom, where it destroys the red blood cells in an organism and causes swelling and deaths of cells and living tissue near the site of the bite. The victim dies shortly after the bite because of the hemotoxic properties that the venom holds.

The venom is more toxic than Copperheads, but its toxic properties are way less when compared to that of rattlesnakes and other vipers.

Copperheads have bitten a lot of humans in the US. However, their venom is not potent. Copperheads also have hemotoxic venom, where the bite results in temporary tissue damage around the area of the bite.

The bite is painful but is rarely fatal to humans. When touched, they produce a musk that smells like cucumbers, but it is not harmful.

Cottonmouths breed in Spring and Autumn. It is Ovoviviparous, i.e., the eggs remain within the mothers’ body until they hatch, and they develop within the female’s body itself.

Around ten baby cottonmouths are born at once, after three months of the gestation period. The young one’s length is 9 inches. These babies receive little maternal care. They also use “Caudal Luring” as a way to attract prey.

As and when the babies mature, the tail color fades, and so does “Caudal Luring.” They have a life expectancy of about twenty-four years.

Copperheads’ mating season starts from Feb to May or from August to Oct. Males engage in a ritual where they fight for the female Copperhead to mate. The snakes who lose do not challenge again, and a female also gets a chance to fight prospective partners.

She mostly rejects the male who backed down from a fight with her. They are also Ovoviviparous. After mating, the female gives birth to two to eighteen babies. After mating in the fall, the female tends to store the sperm for months, until hibernation.

Babies are Eight to ten inches long, and they show different hunting patterns than adults. They indulge in “Caudal luring,” too. They have a life expectancy of about Eighteen years in captivity and fourteen years in the wild.

To conclude, the following are simple differences between the two.

475 Cute and Funny Names for Your Pet Snake

Difference between Cottonmouth and Water Snake