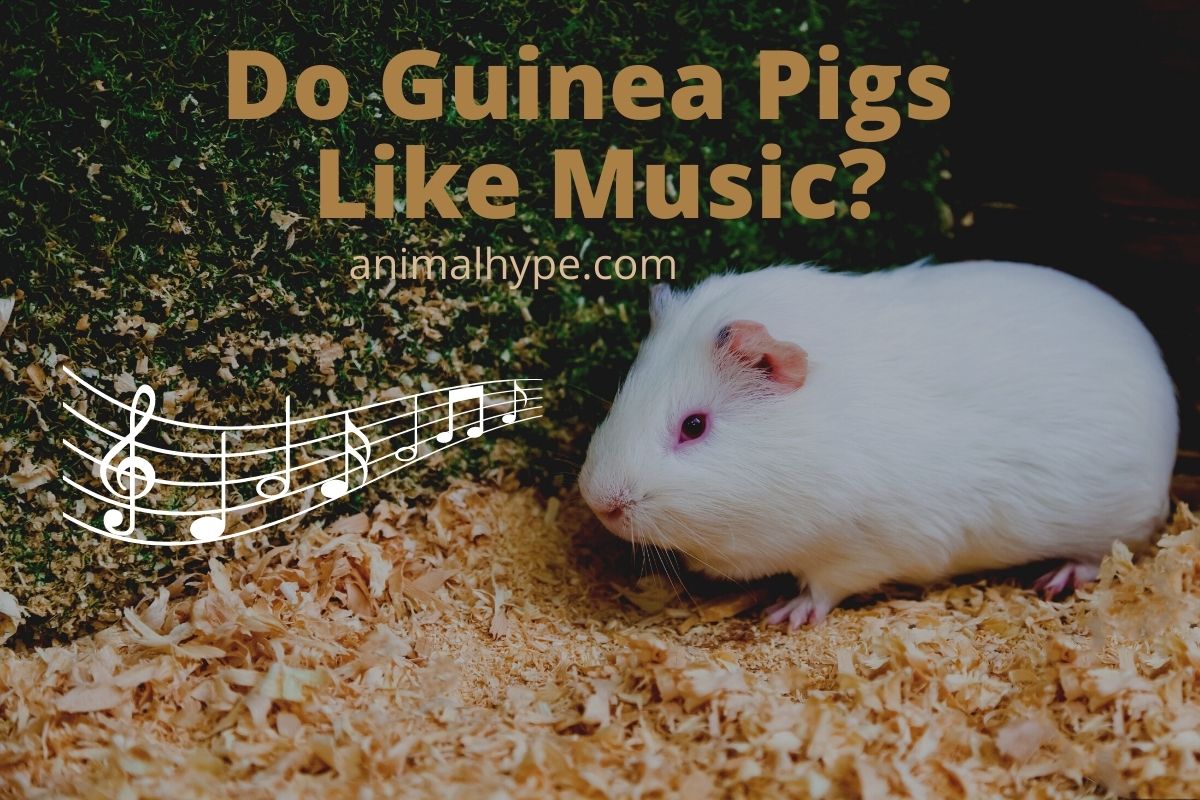 Guinea pigs are wonderful pets. They are fun, entertaining, and easy to play with, and because of the same, they make amazing pets. With house owners listening to music, it is uncommon to wonder if Guinea pigs enjoy music and if they do, is there a preference? This is the reason why a lot of pet owners have questions, especially if they are huge music lovers.

Now, the question is, do guinea pigs like music? Yes, guinea pigs have been found to like music. While there might not be much evidence about which genre soothes their mind and which one creates chaos, they are receptive to sound.

No matter how absurd this question might sound, it is always good for pet owners to know, so they could be more mindful in front of their pets to prevent them from stressing themselves out, which could seriously affect them.

Guinea pigs are more sensitive to sound than humans.

Till now, there aren’t any pieces of evidence to prove that Guinea pigs like a certain genre of music, but there are ways to tell if they like the song or if it is stressing them out.

Some owners have reported that Guinea pigs enjoy listening to Lady Gaga and the Beatles.

There are owners, according to who their pets react positively to soothing, calm, low changes in frequency music. Behavioral changes are the best way to understand what one’s Guinea pig is feeling.

Here are some behavioral patterns that can help one to understand if their Guinea pig enjoys music.

Guinea pigs are funny creatures. They barely close their eyes even when they sleep. They are extremely alert and in fear of being hunted or put in dangerous situations, keep their eyes wide open. But when put in situations they are comfortable in, or when enjoying it, they tend to close their eyes.

Just like humans, every behavior is a different sign when it comes to Guinea pigs too. Learning to interpret them is the best way to keep one’s pet pig happy.

Guinea pigs are active animals. Popcorning is nothing but their dance move of happiness where they run and make these quick, little jumps.

Calm music is believed to make Guinea pigs feel content and comfortable. Even though popcorning is done out of joy, sometimes it could be because of fear.

It is always better to study their behavior properly before assuming it. Most owners have reported that their pets do enjoy soft music and that it calms them down.

They have a strong sense of sound, and this is the reason why loud music is not a good option for them. When Guinea pigs run faster or are overly active than their normal, it could be out of fear.

Guinea pigs enjoy eating. A good appetite while the music is being played, is a good sign that they like music. Being active, energetic, and eating well are some of the signs that Guinea pigs prefer the genre of music one’s playing.

Being the right amount of active

Guinea pigs are extremely playful and, for the same, giving them hurdles, and toys act as a positive stimulation.

If they are made to listen to calm, peaceful music that they enjoy, they are going to stay energetic and playful like their normal self. But this is necessary to be closely monitored as well.

What Kind Of Music Do Guinea Pigs Enjoy?

There is no such proven genre that Guinea pigs enjoy. Just like humans, they have their own preferences, and some might not even like music. However, it is believed that soft and calm music can make them relaxed and happy. This can include soothing violin tracks or any other tracks with low-level volume.

There are several tracks on YouTube for Guinea pigs that can make them feel relaxed. It is always good to start slow, give them some time, and observe before making a decision.

Start at the lowest volume and play music with fewer frequency changes as they are extremely sensitive to frequencies and can listen to sounds that humans can’t.

No matter how social and playful one’s Guinea pigs are, loud music such as rock can easily scare them out.

It is probably not advisable to buy Guinea pigs if the one is a constant listener of the same or if one lives around an environment that is often loud.

As Guinea pigs are extremely sensitive to sound, any loud music can distress them and create trauma. It is always better not to play loud rock music or make loud banging noises when one has them as pets as that can affect their daily life.

Exposure to loud noises can frighten them. Guinea pigs have always been prey animals, and this sensitivity to noise helps them to stay alert of any predatory animals in the wild. Also, there are studies that show that loud music can damage their inner ears.

This can cause the release of free radicals following acoustic trauma. They also might not enjoy the sound of alarm clocks, horns, slamming doors, and dogs barking.

How Do Guinea Pigs React To Loud Music?

One common behavior of a scared or feared pet includes being overly active and running frantically. They also make many high pitched, purring noises. They sometimes chatter their teeth. Every Guinea pig is different.

No matter how calm the music might be, some might not like it. It is always advisable to monitor their behavior for any kind of stress or discomfort. Letting out a shriek and chattering noises are some signs that one’s pet is extremely stressed out, and it is important to calm them down.

How to calm a stressed-out pet Guinea pig?

Guinea pigs are easily stressed out because of fear due to loud noises such as loud music, etc. Snugging them close to one’s chest slowly can reduce stress. Providing them a friendlier environment where they can hide, such as cut-out cardboard with hay on it, can make them feel calm.

Adding white noises and soothing music can sometimes help to calm them down. Not all Guinea pigs like to be snugged, and some might feel afraid. Giving them the space to feel comfortable, and taking things slowly can help in this situation. If nothing works, taking them to a vet could be the final resort.

Experimenting with music can help one stick to their pet’s favorite genre. Their Guinea pigs purring or closing their eyes are some signs that they like the music. If they seem stressed out, it is advisable to change it. One can find playlists of soothing, calm music that their pet Guinea pig might like on YouTube, Spotify, etc.

Do Guinea pigs like rock and other loud music?

How can one know what is loud for their Guinea pig?

Playing sudden, slightly loud music will definitely scare them out. It is always good to start from the lowest volume and increase it if they show a positive response is the best way to find it out. Unlike humans, they have a more prominent hearing and can hear a frequency range between 54-50,000 Hz.

No matter how much they like music, it is always good to keep them away from loud music because of their sensitive ears, which are evolved to be a defense mechanism to protect them in the wild.

It is always good to get them introduced to music by keeping it on the lowest volume and slightly increase it until they show behaviors that make them seem happy.

Finally, Do Guinea pigs like music? If the music is calm, giving it a shot is the best way to find out, but there are many pet owners that believe that their Guinea pigs like a certain genre.