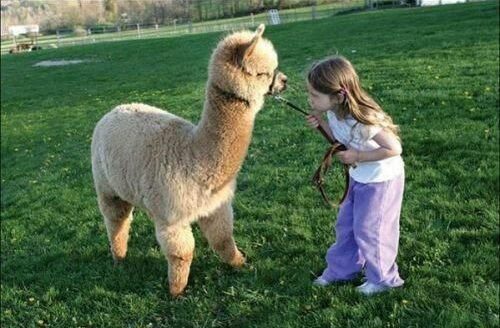 Alpacas are irresistibly cute, and it is of no wonder why most pet owners would want to have one in their backyard. With beautiful eyes and velvety snout, alpacas are indeed adorable animals. Apart from being adorable and cute, alpacas are friendly animals if handled properly.

This is why the number of domesticated alpacas has rapidly increased over the years. It has become quite common among people who have a spacious backyard to domesticate alpacas and treating them like the other common pets. But do alpacas make good pets? Or are most people deceived by their cuteness and bringing them home?

Though alpacas aren’t anything like your common pets, they do make very good pets if they are treated well. Alpacas are livestock animals, which means the handling they receive as youngsters determine how good of a pet they make when they become an adult. Alpacas are curious animals, unlike the common pets you see and are very protective of themselves. If you can earn their trust, the response you receive from them can be gratifying.

In short, whether they make good pets or not entirely depends on how well you treat them. In this article, we have answered the commonly asked questions regarding domesticating an Alpaca and the things you should know before domesticating one.

As said earlier, alpacas aren’t like the common pets you know of. They are livestock’s, and hence their natural instructs differ greatly from that of the other pets.

This means that unlike common pets like dogs and cats who loves to have your attention, an Alpaca may not always love it. Whether alpacas love to be petted or not depends on the relationship they had with humans in their childhood.

Unlike dogs who simply trust every human they see, it takes time to earn an alpaca’s trust. It would take regular visits to the yard where your alpaca lives and spending some time with them.

Alpacas are curious animals, which means that they would naturally be interested to know who you are and to know whether you are a threat or not.

Apart from being curious animals, alpacas are intelligent too. This makes it easier to earn their trust and make them understand your intentions. Once the alpaca realizes that you are not a threat to them, their response can be rewarding. The moment alpacas decide that it likes you, they would come running towards you every time you go near them.

An interesting thing to note down about alpacas is that when it comes to petting, they behave like cats. Once you earn their trust, they can be more receptive than you can imagine.

Most alpacas would come to you asking for a gentle stroke or a hug. Alpacas tend to be more receptive to kids than adults.

Are alpacas easy to care for?

Contrary to what most people would say, alpacas are animals that are easy to care for. It is easier to take care of an alpaca than a god when it comes to the attention that is needed.

Alpacas being livestock, only needs a basic shelter to keep them away from the heat and foul weather.

Yeah, the shelter has to be a little big than what you would need for a canine owing to their size, but that’s pretty much all they need.

Similarly, when it comes to vaccination, alpacas only need a certain type of vaccinations and very few anti-parasitic medicines. Also, you would have to shear their fleece every year before summer to keep them cool.

Probably the difficult thing to do would be cutting their toenails whenever it is needed. It is interesting to note that unlike the other pets, alpacas do not have hooves.

Instead they have two toes with a soft pad on the bottom toe and a hardened nail on the top toe. It is this hardened toenail that you have to cut as and when needed to make sure that they have a proper foot alignment and they remain comfortable.

As said in the earlier sections, alpacas are livestock animals who are protective of themselves, which means that they won’t let you cut their toenails easily in the beginning. Eventually, when you earn their trust, it will become easier for you.

Do alpacas get along with dogs?

If you didn’t know, alpacas are animals that live in herds in their natural habitat. It makes them civil animals who can easily get along with other alpacas in the herd and the other animals in the herd.

Owing to these reasons, alpacas can easily get along with other pet animals such as dogs and cats or even other livestock such as cows, goats and sheep.

Alpacas are not solitary animals, and they always prefer having a company. If you have a pet dog, your alpaca will happily get along with them.

Yeah, alpacas are capable of spitting, and whether they spit on you or not entirely depends on how well you treat them if you didn’t know, an alpaca spit when they want to show dominance or when they feel that they are being threatened.

So whether you get spat upon or not entirely depends on how well you treat them. In most cases, a domesticated Alpaca spits when they are annoyed, and they spit as a last resort.

Before they spit, they will give you clear indications to stay away from them, and it can also be understood from the way they pull their ears backward.

An alpacas spit isn’t anything you can imagine of rather, and it can be the slimmest and stinky substance you might have ever seen in your life.

The spit of an alpaca is not just the saliva from their mouth, depending on how irritated or threatened they are, they can pull out the rancid food materials and digestive juices from the remote corners of their stomach and spit on you.

What makes it even worst is that alpacas absorb nutrition from the food they eat by breaking them by fermenting them. Basically, if you treat them bad or give them a chance to feel dominated, brace yourselves to be showered upon by their spit.

No, Alpaca spit is not dangerous or poisonous. It is just that it’s going to be way more stinky than what you can possibly imagine. But don’t worry, an Alpaca won’t spit on you without any provocation or giving you any warnings.

As said in the previous section, they only spit when they feel threatened or are annoyed. Depending upon how irritated they are, they can spit anything from a spray of saliva mixed with the food they are eating to the most disgusting rancid green fluid from one of the three compartments of their stomach.

The best way to avoid getting spat is to treat them well and making them clearly understand that you are the boss. In most cases, it has been found that an alpaca, which has been mingling with humans since it was a baby is less likely to spit on humans than the one which is not.

Can you ride on an Alpaca?

No, you cannot ride an Alpaca. On average, an alpaca weighs just only about 150lbs. The maximum weight they can carry is 1/3rd of their body weight, and that’s about 50lbs.

Alpacas, in general, are bred for their fleece, but in some cases, they are trained to carry small luggage such as water bottles or snacks during trekking expeditions.

What to feed a pet alpaca?

Not just alpacas, the best way to go about feeding any pet animal is to feed them what they would eat in their natural habitat. Alpacas mostly eat grass or hay, and in general, an alpaca should be fed 1.5% of its body weight daily in grass or hay.

If you are planning to get an Alpaca, it is advised to get one that is at least six months old because, until that age, they cannot eat anything other than their mother’s milk.

Though it might seem perfectly okay to feed milk from a cow or got to baby alpacas, you cannot because of the high fat and sugar content in them. You can feed an alpaca that’s at least 6 months old grass, hay, food pellets, vegetables and fruits (As supplements once in a while), and so on.

As always, the best way to determine what to feed and what not to feed your alpaca is to contact your vet!

To sum up, alpacas can be a good pet if you are willing to treat them with care and respect. But you also need to understand the fact that though alpacas can be good pets, you can’t expect them to be like a dog or cat.

If you have enough space in your backyard and enough patience to earn their trust, you can go ahead with bringing an alpaca home! Also, don’t forget to check out cute and funny pet alpaca names for naming your pet alpaca.