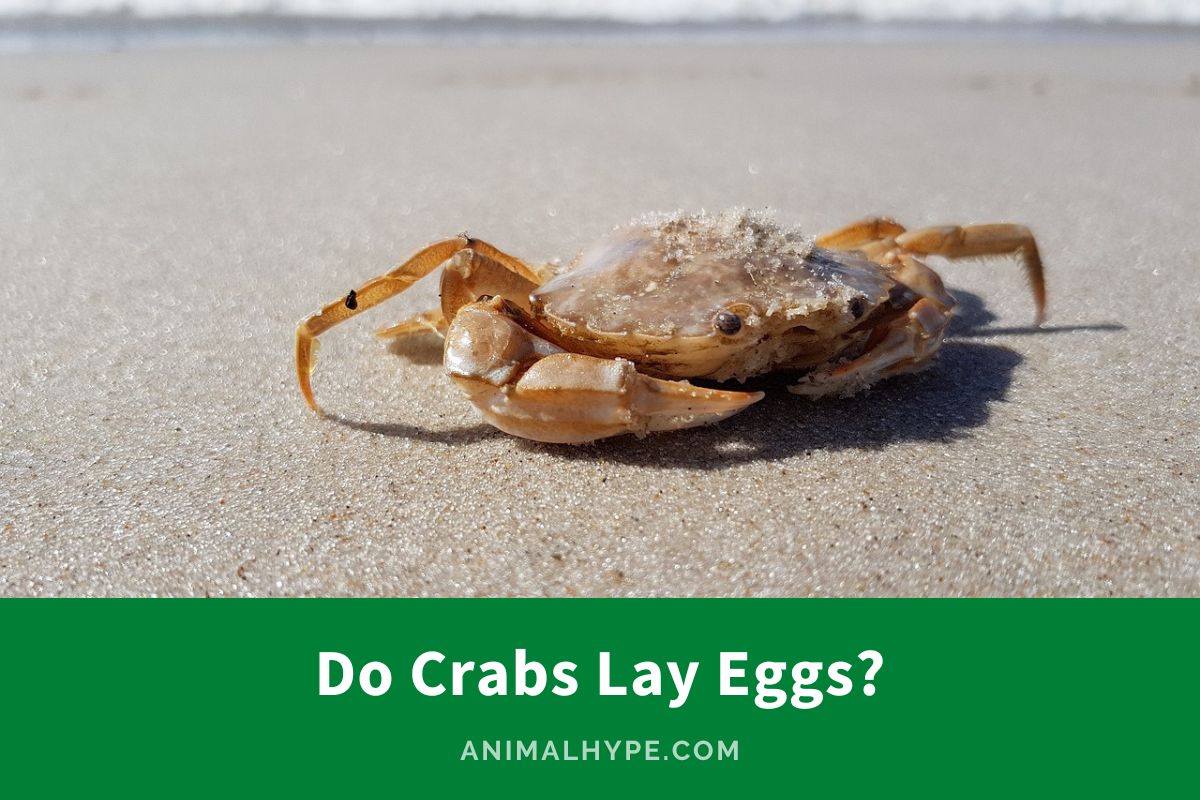 Crabs are semi-aquatic animals that are mainly found in oceans. They also live in terrestrial conditions and freshwater sources. Naturally, you might wonder how crabs reproduce. Read this article till the end to find out whether crabs lay eggs or not and reproduction behavior in crabs.

So, do crabs lay eggs? Yes, crabs lay eggs to produce offsprings. Egg count varies with specie to specie and ranges from 50,000 to 10 million in a single session. A female blue crab lays around 8 million eggs in a single mating session. The female crabs usually store the eggs on their bodies and release them as they hatch.

Crabs are found mostly in water, but several species live off the land. They are crustaceans or semi-aquatic animals and have external skeletons. Further, we’ll discuss reproduction in crabs in detail.

How do crabs reproduce?

Female crabs save the sperm for an extended period before utilizing them to fertilize the eggs. Once fertilization takes place, the eggs are released to the abdomen of the females. This is situated under their tail flap and is kept safe by a sticky material.

Here, the eggs are protected during the embryo development phase. Females carrying eggs are known as berries since they look like round berries.

After completing the development, the female crabs release newly hatched larvae into the water. Here they become a part of the plankton. They also consider the tide when releasing larvae. The larvae are called zoea and can move along the prevailing current.

Due to a spine, they have natural protection from large predators. Most larvae have to forage for food, but some species have sufficient yolk from the eggs that they can survive the larval stage using food from it.

How do female crabs care for the eggs?

The female crabs save the fertilized eggs inside large spongy mass lying in the middle of their body and abdominal flap. The eggs sit close to the pleopods which refer to the small legs of the crabs. These make it appear like a berry.

To maintain the health of the eggs, the female crabs wave water above the eggs continually with the help of their pleopods.

Once the eggs hatch, the zoea larvae are born. These are released into the oceans like plankton. While the young crab grows, it passes through a series of molts. These are stages of larval growth in which they transform in function and form. The process is called metamorphosis.

How many eggs do crabs lay?

Red crabs lay a maximum of 100,000 eggs. Meanwhile, a female blue crab can lay a maximum of 8 million eggs in a single mating season. Note that only one egg is likely to live from each brood. Horseshoe crabs may lay up to 88,000 eggs in one season of egg-laying.

What are the egg-laying behaviors of freshwater crabs?

The developing stages of freshwater crabs are typical of crabs. They hatch as young crabs and undergo larval stages while they are still inside the egg. The broods may contain only a few hundreds of eggs. Note that this number is as large as thousands for marine crab species. The eggs are larger, with 1mm in diameter.

Their survival in freshwater habitats means that crabs had to change their water balance. They have several adaptations for this. For instance, freshwater crabs reabsorb salt content from their urine. They also have other adaptations to deal with the loss of water.

Apart from their gills, they have pseudo lungs within the gill chamber which lets them breathe the air outside. These evolutionary features help freshwater crabs to survive in terrestrial situations. However, they still need to go into the water from time to time to eliminate ammonia through excretion.

What happens to the crab eggs as they hatch?

After fertilization, the crab eggs are stored below the wide tail of their mothers. Every egg is attached to the tail of the female crab through a fine stem.

These are protected from predators and damage. Every egg had a reserve of yolk that feeds the young crab through their developing phases. This lasts for one to two months of incubation.

Baby crabs are called zoea. The zoea larvae hatch out of their eggs and get carried far from their mothers. The zoea is transparent and has jointed limbs as well as a crusted external skin. They have segmented tails useful for swimming. They also have spikes on the upper part of their bodies that protect them.

What are the egg-laying behaviors of red crabs?

Red crabs are species found on Christmas Island of Australia. The central plateau of this island is covered in rain forests. Note that the island sees a tropical climate and receives a rainy season as well as a dry season.

Over 120 million red crabs reside in the rain forest on Christmas Island. These crabs live in dirt burrows alone, or inside long rock crevices. They remain in shadows of these locations for a major part of the year. During October or

November, as the wet season begins, crabs start migrating towards the beaches. This is also the time when lunar cycles and tides shift.

Once the crabs have mated, they begin the second phase of migration prior to their eggs hatching. In this stage, the females brood the eggs in coastal burrows in rock or inside dirt for 12 or 13 days. Every female can lay a maximum of 100,000 eggs and they keep the eggs within their abdominal sacs.

Once the waning moon arrives, the females move into the sea. In an action that resembles a dance, the red crabs release the eggs at the edge of the water.

How do horseshoe crabs lay eggs?

Horseshoe crabs reach the beaches in the early summer and late spring to lay eggs. Along the Atlantic coast, the highest rate of spawning happens in Delaware Bay. Here, crabs arrive in thousands to the beaches in May and June.

Sandy beaches offer protection from wave impacts. Besides, the mixture of pebble and sand is ideal for incubation of eggs for horseshoe crabs.

Crabs come to the spawning beaches at the time of new moons and full moons and the corresponding high tides. At this time, water reaches the highest levels on the beach. As the female is set to lay eggs, she climbs to the highest water level and has a male clinging on to her.

The male holds on to the female shell using a pair of modified claws. The female almost drags him while spawning. Besides the attached male, other males may try to fertilize her eggs by placing their bodies around and on the spawning pair in the middle of the egg-laying process.

One female might get five or males trying to mate during one egg-laying session. While spawning, females partially bury themselves inside the sand as they lay a group of 4,000 small green eggs.

In a single evening of laying eggs, a female may lay many such clusters of eggs. By spawning for many nights, they may lay 100,000 eggs or more.

What happens once the eggs of horseshoe crabs hatch?

The eggs of horseshoe crabs hatch from 2 to 4 weeks of time. The larvae come out of the sandy beaches and get into the water once the high tide comes, almost a month afterward. The newborn larvae resemble smaller versions of adult horseshoe crabs, but lack tails.

Once hatched, the young horseshoe crabs live their initial years in tidal flats. Later, they move away from the beaches as they grow older.

Do other species feed on crab eggs?

One can find the biggest population of horseshoe crabs in Delaware Bay. As the spawning season starts, several thousands of eggs come out to the open beach due to the waves as well as the mating crabs’ digging.

If these eggs get exposed, they could dry up easily and prevent hatching. However, they are still important for the ecosystem. They become a primary source of food for migratory shorebirds traveling from South America to the Arctic through the Atlantic Flyway.

Horseshoe crab eggs are a good source of food for these birds. Many other migratory birds from various species also visit the Bay during the second half of May to feed on these eggs.

It is a spectacular sight to observe these hungry birds arriving. Every bird almost doubles their weight in under 2 weeks for such is the number of eggs they eat. Later, they take off for the Arctic.

What are the egg-laying behaviors in Blue crabs?

Female blue crabs are capable of mating only during one period of their lives. This is during the days after they reach maturity through molting.

This means the male blue crabs have only a short window to mate with the females that could fertilize millions of eggs produced across the 1 to 2 years that follow.

As spring approaches, the crabs get closer to the ocean carrying billions of eggs. Every female blue crab lays 750,000 to 3 million eggs from the latter part of April, but only one out of every brood has the possibility to survive.

Female blue crabs keep a maximum of 2 million eggs inside their foamy enclosure known as the sponge.