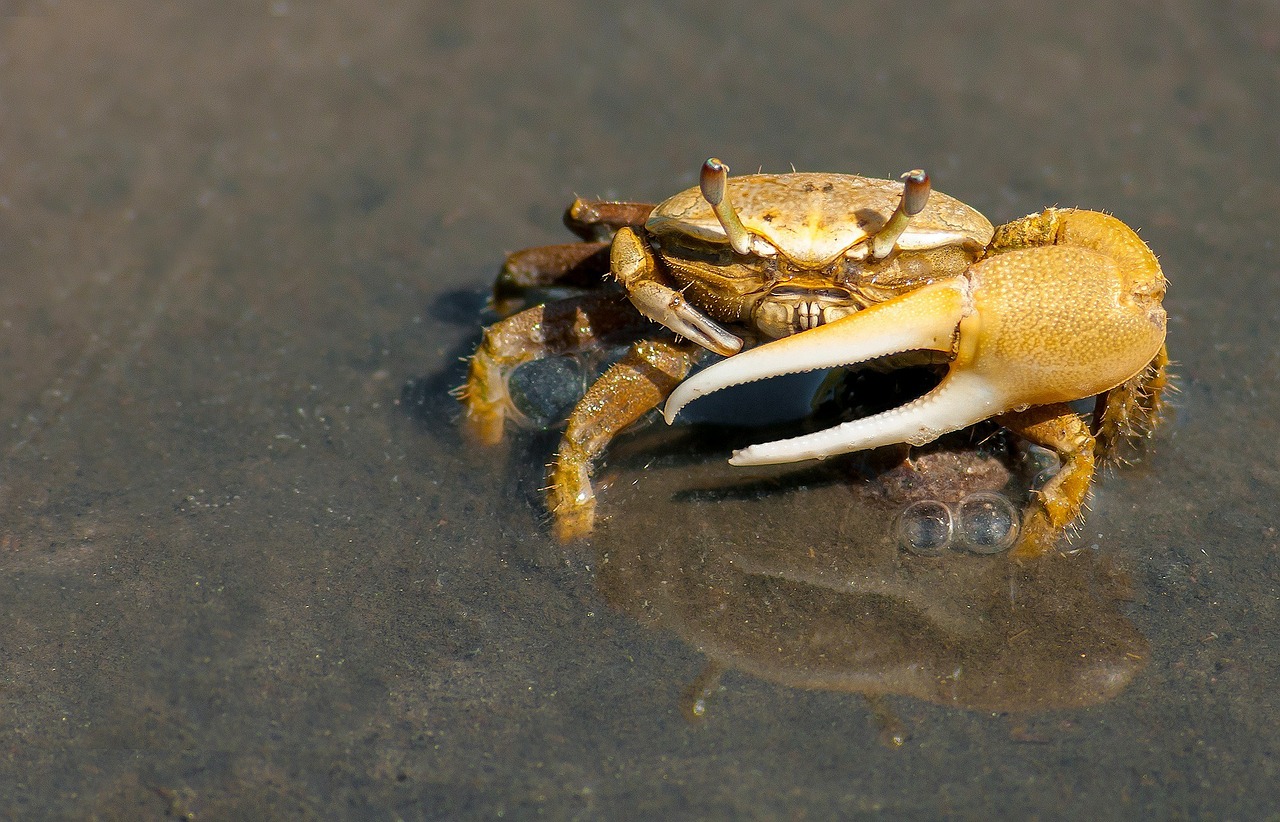 Crabs are animals found in both land and water and have multiple pairs of legs. Besides, they are found in abundance in oceans. Hence, you might be curious whether these animals can swim or not. Don’t worry we have answered this question in this article.

So, do crabs swim? Although crabs live in water, not all crabs can swim. Crabs are amphibious animals and can move through the water. Only a few crab species have the ability to swim. The majority of them move through the ocean floor by walking or running. Certain species like blue crab found in the Atlantic coast display swimming. They use their improved rear legs to swim as they are shaped like paddles.

What enables Some crabs to swim?

Crabs have ten leg pairs. In this, the foremost ones are claws. Crabs of the family Portunidae have specially adapted back legs known as swimmerets. Swimming crabs like flying crab have flattened back legs perfect for swimming.

The paddle-shaped legs revolve at a rate of 20 to 40 per minute which helps crabs move ahead while swimming.

Certain crabs can walk to their sides only. Meanwhile, the common spider crabs of the British waters are among the type that walks backward or forward. Similarly, stone crabs can also run or walk through the bottom of the ocean.

Why do crabs swim?

Scientists say that swimming helps crabs to spread to close-by areas. Besides, it helps them get past hurdles which they cannot climb. Swimming also helps them to flee from predators or move away from regions with low oxygen content.

Which family of crabs are known as swimming crabs?

Portunids are called the swimming crabs. They have modified pair of legs at the rear. These are flat and shaped like paddles appendages. They are known as swimmerets as they let crabs swim. These animals usually swim to their sides, but are also capable of swimming forward and backward occasionally.

Besides, they have streamlined bodies ideal for quick swimming. They have a carapace or the hard outer covering which is flat and broader than usual. The largest gap is between their 2 lateral spines.

They possess large pincers having spines. This helps them to catch prey while moving fast. Even though they can swim, they spend a large amount of time on the floor of the sea. They stay between rocks, seagrass, floating objects, and reefs.

They are opportunistic when it comes to feeding as they eat whatever is available to them. This covers living organisms and decaying matter. The crabs found in common cuisine belong to this family.

Do crabs swim upside down?

A species of crabs called the horseshoe crabs are found to swim upside down. To be precise, they swim at an angle of almost 30 degrees with the bottom. This is not usually spotted though. There is a reason why they swim upside down as it benefits them in multiple ways.

In horseshoe crabs that swim, the swimming behavior is believed to be inherited. They learn this when they are an embryo lying upside down inside their transparent egg.

Researchers have observed that developed embryos perform somersaults within the eggs using their book gills and both legs to create sufficient movement. Recently born larvae can also be found swimming to the surface.

In what ways do swimming help horseshoe crabs?

Besides, swimming may help them avoid cannibalism. These crabs are known to display such behavior under captivity.

In smaller horseshoe crabs which are more buoyant, swimming is an alternative way of turning inside water with the help of telson. Sometimes, these animals move to the bottom of the water to regain upright posture.

When horseshoe crabs grow in size, they tend to swim lesser. For this reason, they are rarely spotted on the surface.

Are blue crabs capable of swimming?

Blue crabs are a crab species that come under the family of Portunidae. These crabs are capable of swimming. Their scientific name is Callinectes sapidus which means a beautiful swimmer. The blue crab is called a decapod which refers to their ten appendages.

Out of these, 4 pairs have segmented legs and the final pair has paddle-like legs that allow them to swim. This distinguishes them from other crab species as they can swim more freely.

These legs, also called paddle fins are very flexible. They can be revolved in a sculling motion so that the crab can propel itself in water. They may reach speeds of 1 meter per second.

Blue crabs are found in saltwater and freshwater regions. However, their most common habitat is brackish waters, which is a blend of freshwater and saltwater.

Are blue crabs capable of staying out of water for long?

Blue crabs breathe with the help of gills. They can even survive when outside water for a maximum of 24 hours if they can maintain moisture near their gills. Hence, they usually move to dark, shady, moist, and cool locations to keep their gills moist and to stay out of predators’ reach.

Further, crabs have articulating plates specially formed surrounding their gills. They use these plates to keep their gills safe and moist.

Most of the crabs spotted near the debris line created by a high tide are swimming crabs. Some people call them blue crabs, but this is a misunderstanding.

All swimming crabs come under the family ‘Portunidae’. They have adaptations of modified legs which are similar to paddles to help them swim. Most of them also possess diamond-like bodies with big claws.

What are the survival adaptations of swimming crabs?

Swimming crabs have such ability that they can survive outside water for a long stretch such as 24 hours. They accomplish this with the help of their special gills.

If they keep their gills moist, they can absorb oxygen from the atmosphere to water in their gills. Then they move oxygen into their capillaries.

This happens through osmosis, in which, the particles move across a permeable membrane to achieve equilibrium on both sides of it. Once oxygen enters capillary blood vessels, it can transport oxygen throughout its body.

However, they need to keep their gills moist for this process to take place successfully. Crabs have specialized anatomical features to bring down the evaporation rates from their gills.

They use movable plates beside the gills to prevent the escape of moisture and help it from drying completely. Besides, they can save water in their blood, special pockets in their bodies, and bladder.

What are the growth features of swimming crabs?

Swimming crabs show quick growth. This makes them a prominent benthic predator. They are very opportunistic and may hunt live creatures if they cannot find dead animals to feed on.

During the growth of the swimming crabs, they renew their exoskeleton from time to time. They re-calcify their body’s exterior to make new shells. They are called soft shell crab because of this stage. During this, their body is mostly unprotected and soft, right after molting takes place.

Note that swimming crabs are a part of many popular cuisines worldwide.

Why do swimming crabs wash up on beaches?

Swimming crabs are found washed up in beaches very often. There are several reasons behind this. Scientists believe that this is caused by the rotting of animal carcasses in the water.

When this happens, the red tide house bacteria use up most of the oxygen available and generates anoxic conditions in the water. Due to this shortage of oxygen in water, crabs come and get the required oxygen on land. However, this sometimes leads to drying and eventual death.

There are also times when crabs are found lifeless on the beach, even in the absence of high tide. This is due to the cold temperatures of the water. Controlling temperatures of body or thermoregulation is a difficult task for invertebrates. When in cold waters, they become lazy and get washed to the beaches.

Crabs have behavioral adaptations that support their extended journeys from water to land and back. When on land, they stay in damp, cool, and dark places to reduce evaporation of water from gills. This also helps them to hide from possible predators.

Do crabs swim in their larval stage?

As the crab babies complete the development stage, the mother releases the recently hatched larvae into the ocean.

They become a part of the planktons here. Note that they are released in the time of tides. They do not swim but move with the water currents. Since they have spines, they stay protected from large animals.

Crabs are species found in oceans, freshwater sources, and on land. They have the ability to move through the water and some species can properly swim.