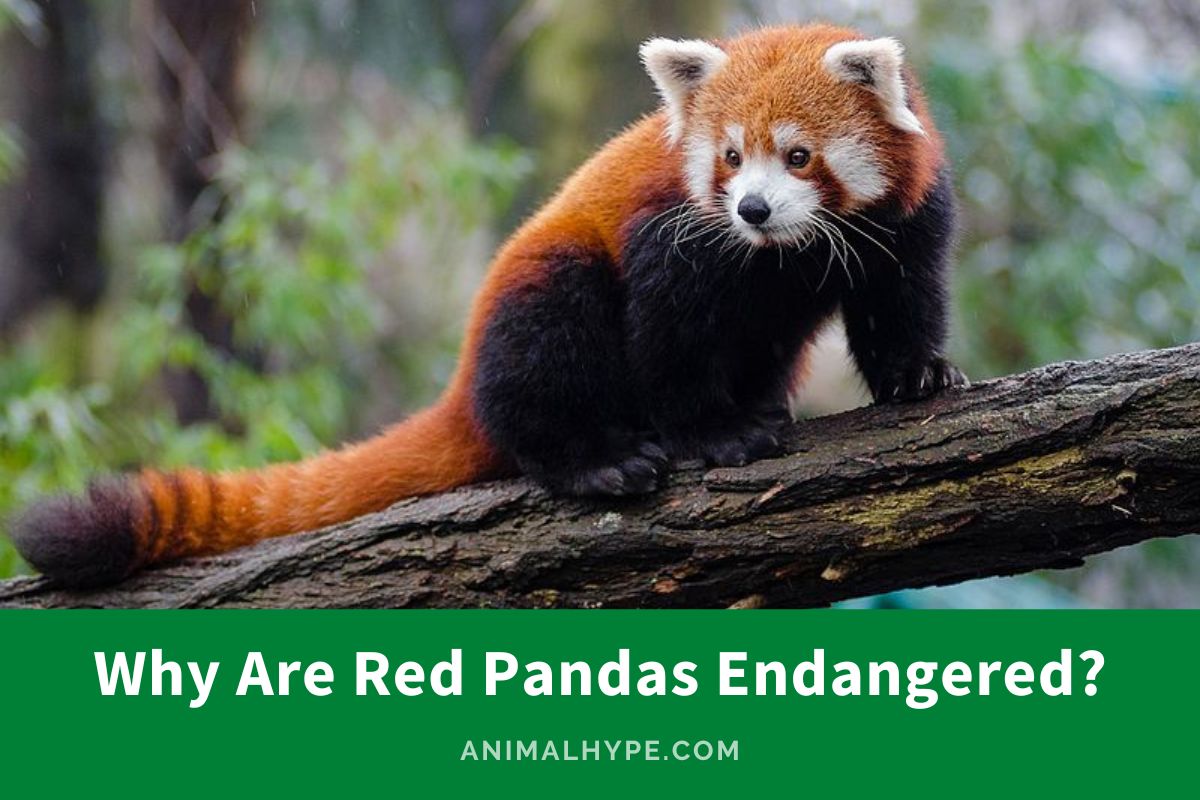 I tried to write an amazing intro to this article but I just can’t stop looking at these little Red Pandas filled with an insane level of cuteness. Red Pandas are simply cute little fluffy mammals that remain a mystery to a lot of people but unfortunately, they are on the edge of getting extinct.

But why are red pandas endangered? Primary reasons for red pandas being endangered are hunting and poaching, food competition with domestic livestock, habitat loss due to deforestation, and low reproduction rate. The current population of red pandas is anywhere between 9,500 to 10,000.

The population of the red pandas has seen a decline of 50% since 2001. Red pandas are actually very solitary animals that spend most of their lives in forests of the Himalayas in Nepal, South-Western China, and North-Eastern India. Therefore, it is very difficult to accurately calculate their numbers.

At one point on time, red pandas use to roam around vast regions of the earth but at once, their population has seen a major downfall for a long time. The answer to finding out why these animals are on the brink of extinction is very necessary as it can save these animals before they become completely extinct.

Poaching of red pandas at a large scale

One of the major contributors to the large scale decline of the red panda population is poaching. Red panda tails are highly expensive which is used to make hats that are considered as good luck charm for a wedding in some parts of China.

Even 200 years back, royal families in Britain were fond of these adorable creatures. In this Victorian era, Red pandas were one of the most famous pets to keep which resulted in the taking away of thousands of red pandas away from their natural habitat.

Hunting of a large number of red pandas takes place in China, therefore, in a few of Chinese provinces like Guizhou, Gansu red pandas have already become extinct. This has caused a discontinuous spread of this species over the southern part of China.

China alone has reported a 40% decrease in the red pandas’ population and at present, the population is very discontinuously spread.

It brings a lot of other changes in the behavior of these animals including mating rituals. A small group of red pandas surrounded by other animals can even lead to the risk of interbreeding.

In China, red pandas are mainly hunted for their fur and their bushy tails. Good luck charm hats are made from the tail and are wore during the wedding ceremony.

Due to the increasing population of local villages, domestic livestock animals are also increasing which are creating huge competition for food for red pandas. Even though the livestock is not a big direct competition to red pandas, but due to trampling, bamboo growth is declining in the local regions.

In the Himalayas, red pandas face so much threat due to their shrinking habitat. Due to growing local people villages clearing forests these animals in search of food are forced to migrate toward the areas where they can be killed by the predators.

Generally, red pandas tend to live in the forests where they can hide from their predators but due to sudden migration, they end up getting killed by predators such as snow leopards and birds of prey.

Deforestation is the major threat to the red pandas’ population as the northeastern belt of India remains under the region where widespread deforestation is taking place by locals.

Red pandas are quite amazing climbers and depend majorly on trees for food. These generally feed on bamboos whereas birds, flowers, acorns, and berries comprise a small quantity of their food.  Red pandas have to eat bamboos in large quantities regularly as their bodies can’t digest cellulose.

Bamboos are cut in large quantities by locals for their domestic use which has resulted in red pandas to migrate to other areas. It has led to red pandas population fragmentation which later results in local extinction of these animals.

Also, people are clearing forests for agriculture, cutting trees for firewood which are the obvious reasons for habitat loss for red pandas.

Red pandas have a low reproduction rate with breeding once in every 1 to 1.5 years. After a gestation period of around 140 days, female red pandas give birth to 1 to 4 young ones. They also have a low infant mortality rate which means only one or two baby red pandas survive to be adults.

These factors determine why the red pandas’ population is constantly declining.

Despite red pandas being listed as a vulnerable mammal in (IUCN) International Union for Conservation of Nature list of threatened species, the Indian government wasn’t taking it seriously. But recently the government has taken necessary steps to conserve the red pandas by halting the Arunachal Pradesh large hydropower plant project.

Tawang and West Kameng are two districts in Arunachal Pradesh that have the largest number of red pandas in the whole state. WWF India spread awareness that followed initiatives by the villagers against deforestation, poaching which is a second major factor in India after habitat destruction.

A group of villages in Arunachal Pradesh has signed up for spreading awareness among local people and over the years put “NO KILLING” boards throughout the forests. With time more and more villages are coming forward in order to spread save red panda campaigns.

Certain strict laws have been implemented by Chinese, Indian as well as the Nepal government to stop hunting of red pandas.

According to WWF India, there is a fine of 1000$ and jail up to 10 years if found guilty killing, buying, or selling a red panda. China and Nepal have also passed various laws to stop trading or killing of red pandas.