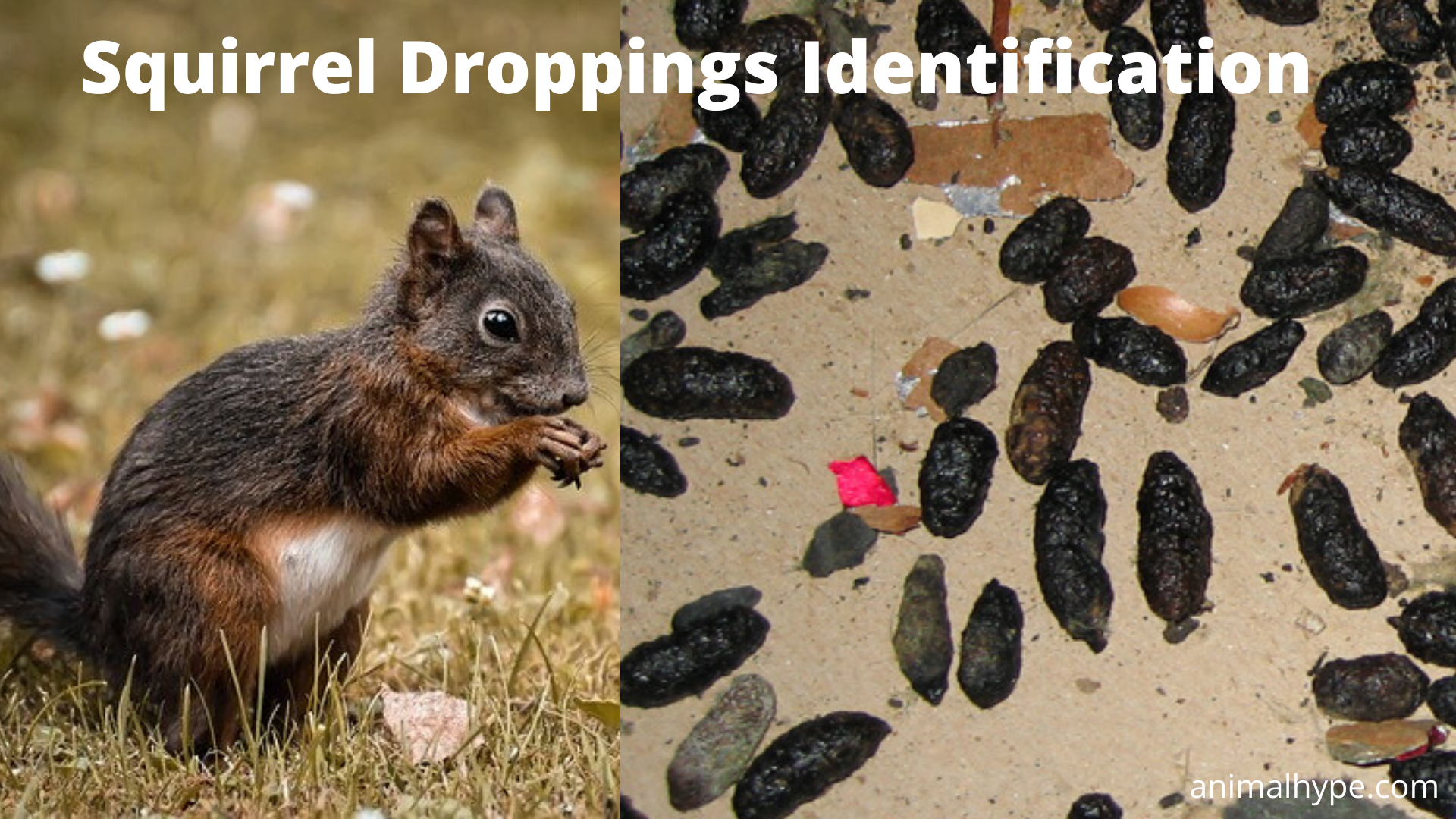 With their twitchy nose, bushy tail and furry body squirrels are irresistibly cute and cuddly. Most of us would love to get our hands on one, right? Well, what harm can these cute little furballs potentially cause?

However, don’t be deceived by their cute looks; squirrels can become an invasive pest and cause serious trouble for you.

Squirrels are fun to be around and to watch only when they are on trees in your yard or when they come to you for a quick snack. But that is pretty much everything; the moment they invade your attic, you will have sleepless nights and a stinky attic.

Similar to all other invasive species, squirrels don’t come to build their nest in your attic one fine day. Rather they would make quite a few visit your attic to make sure that it can be a good nesting ground. During these visits, you would hear rattling sounds and small thumps, which eventually turns out to be a persistent headache.

It is always better to prevent squirrels from making a nesting ground in the first place than clearing them off once they have settled down. The best way to do this is to identify the presence of squirrels at the early stages, and this can be done quickly by identifying their poop.

So, what does squirrel poop look like? A squirrel’s poop is dark brown, smooth and looks similar to that of a rat’s poop. The difference between the two lies in their size and shape. Squirrels are found to leave behind droppings that resemble large barrel-shaped pellets. If you look closer, you can also see that a squirrel’s feces is paler than that of a rat’s because of the differences in their diet.

In this article, we will have an in-depth look at the best ways to identify a squirrel’s poop, the effective ways to keep squirrels at bay, the safest way to clean their poops, and many more. 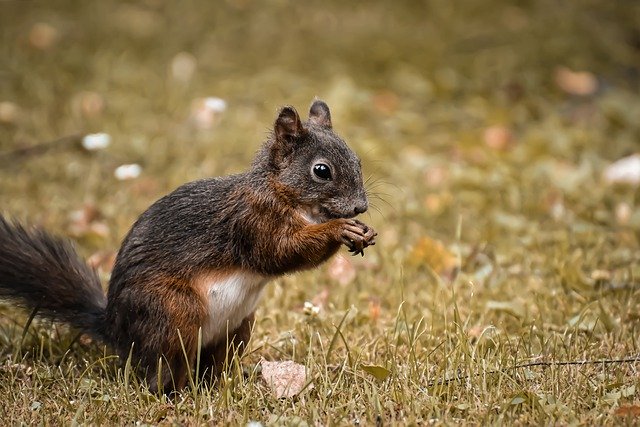 It is not easy being a squirrel. Being small animals with virtually no defense against the larger predators, squirrels prefer staying away from danger without taking any chances.

These tiny arboreal animals do not leave any scent track that may lead the predators to them. Squirrels that live in trees or outdoors normally pick a latrine site that’s nowhere near to where they live and poop only in that location.

These squirrels are so good at hiding their poop that it gave birth to a myth that squirrels don’t poop. Another factor that strengthened this myth is that squirrels poop only during the night when most of the predators are asleep. 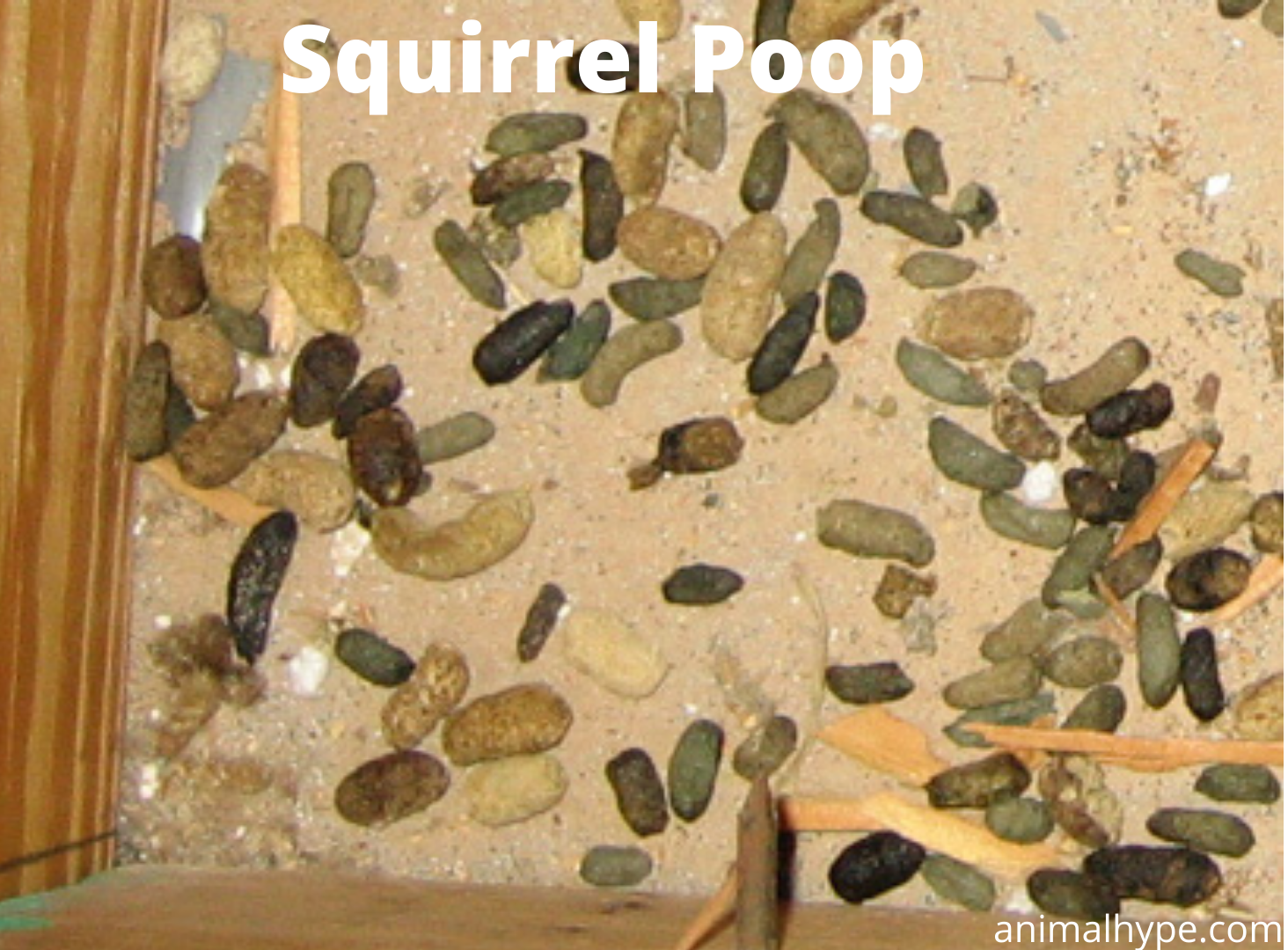 As said earlier, a squirrel’s poop looks similar to that of a rat’s poop in shape and color.

A squirrel’s poop has a pale brownish color owing to its herbivorous nature. Their droppings are generally larger than that of rats and are barrel-shaped. Due to this, a squirrel’s dropping may appear to be evenly spread on the ground.

The effective way to properly identify a squirrels dropping is to analyze its distribution. As said in the earlier section, squirrels are very discreet when it comes to pooping.

They don’t just poop wherever they are. Rather they choose a latrine site for pooping, unlike rats.

How to identify a squirrel’s dropping from a rat’s droppings? 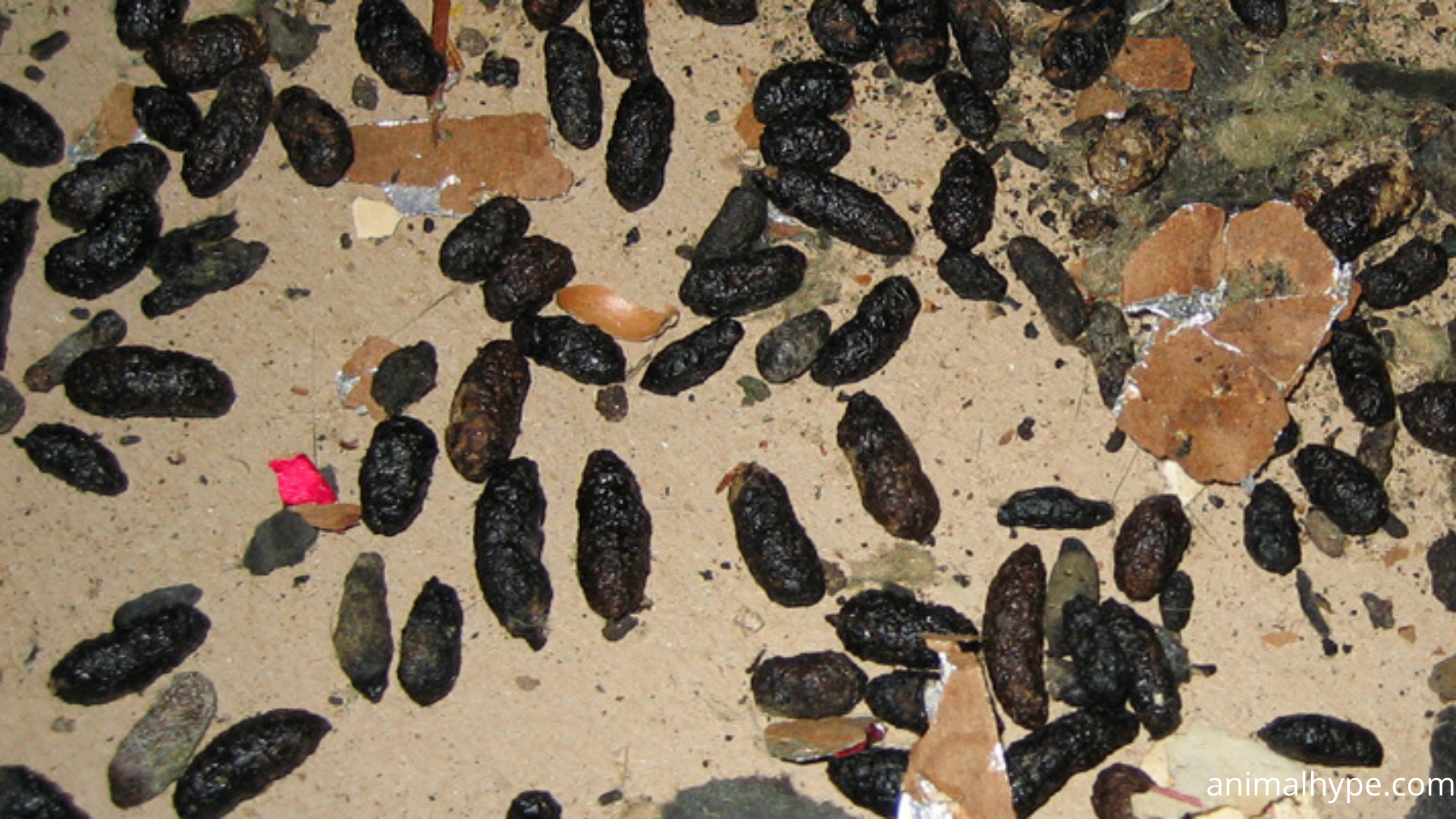 It takes a closer look to properly identify them because they are both invasive pests. It is important that we properly identify whether it is a squirrel or a rat to take appropriate measures to keep them at bay.

In this section, we will look at how to properly identify a squirrel’s poop from that of a rat based on shape, color, and distribution.

The droppings of both rats and squirrels resemble the shape of resins, but on a closer look, there are some striking differences between them. The droppings of a squirrel are larger than that of rats, and its droppings are barrel-shaped, unlike the oblong-shaped rat poop.

If you have a closer look at the rat poop, you can see that it is almost rectangular in shape and lacks sharp edges. Though both the rat’s and squirrel’s droppings are smooth, the former is not found to have an even surface as that of the latter.

The color of the poop of any animal mainly depends on the food that it has consumed. Rat’s being omnivorous, scavengers and opportunistic hunters have a diverse diet.

They are found to consume everything from small insects, roots of plants, vegetables to garbage. Therefore, their poop has a dark color. A rat’s poop is so dark that it appears to be black.

This isn’t the case with squirrels who are herbivorous animals and mostly feed on nuts, berries, and fruits. Due to this, the squirrel’s dropping is paler compared to that of a rat’s dark dropping.

Rats are not as discrete as squirrels when it comes to pooping. Instead, they are found to relieve themselves wherever they are and even while moving around.

This means that a rat’s droppings can be found lying scattered and, in some cases, spread out along their walkway courses.

This isn’t the case with squirrels who pick a latrine site and poop only there. As said earlier, squirrels are so discrete in pooping that their droppings can hardly be spotted outdoors.

How do I know the extent of squirrel infestation based on their poop? 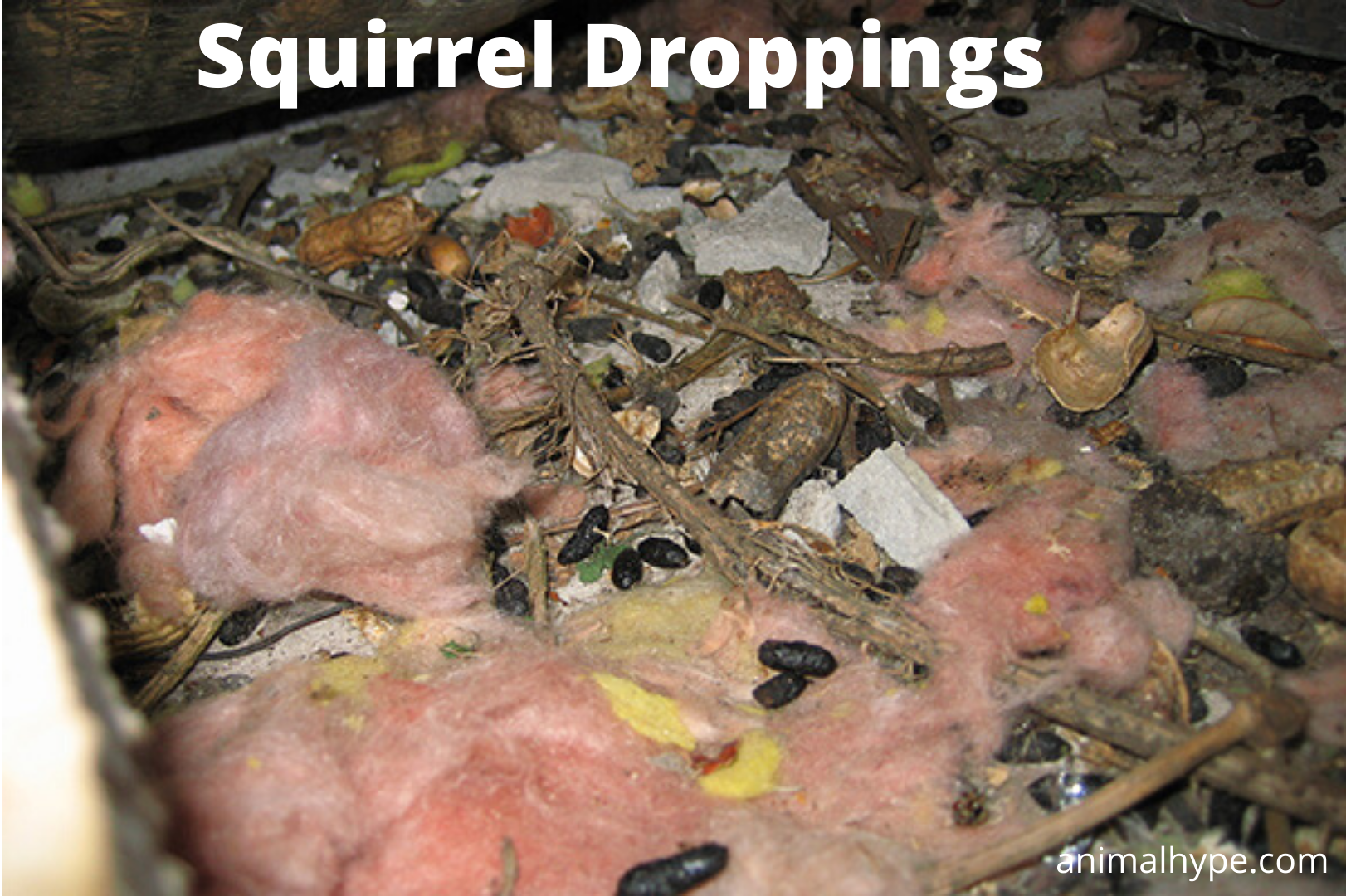 There are two things that can be understood from a squirrel’s poop. 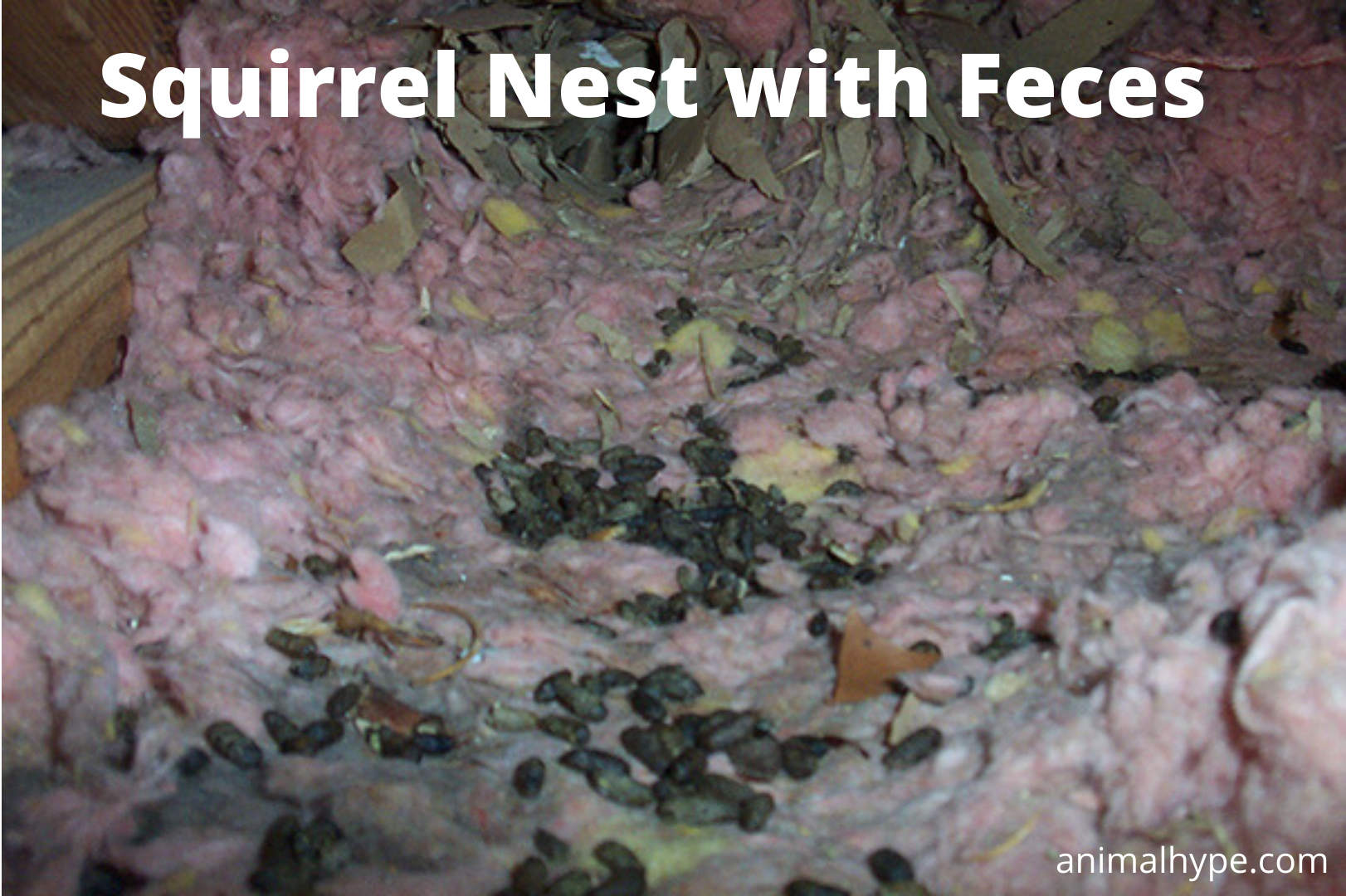 Similar to the waste of any other organism, the squirrel’s feces is dangerous to human beings because of the presence of many diseases causing microbes and pathogens.

That being said, the chances of humans coming in direct contact with a squirrel poop is bleak. But if it were ever to happen, it can have a serious impact on the health of children and old ones.

Among the many diseases that can possibly be transmitted to humans from squirrel feces, the prominent ones are:

Salmonella is transmitted when humans come in direct contact with the accumulated droppings or urine of squirrels. The symptoms of this infection can range from nausea, fever, abdominal cramps, and diarrhea.

It is important to note that there are chances of contracting salmonellosis by inhaling airborne dust of crumbled squirrel poop.

Leptospirosis infection mainly affects the respiratory system in humans. In most cases, the infection is found to be mild, and the patient recovers within a few days. But that being said, there is also a risk of serious infections. In some cases, it can also prove to be fatal.

The other health hazards from squirrel poop are:

Another essential thing to keep in mind is the airborne transmission from the squirrel dropping. When squirrels infest your attic, the chances are that there will be a heap of dried up droppings there.

These dried up droppings easily crumble, and the dust becomes airborne. When inhaled, it can cause severe respiratory illness and be fatal to asthmatic patients. It is, for this reason, one needs to be extremely careful while cleaning squirrel poop. 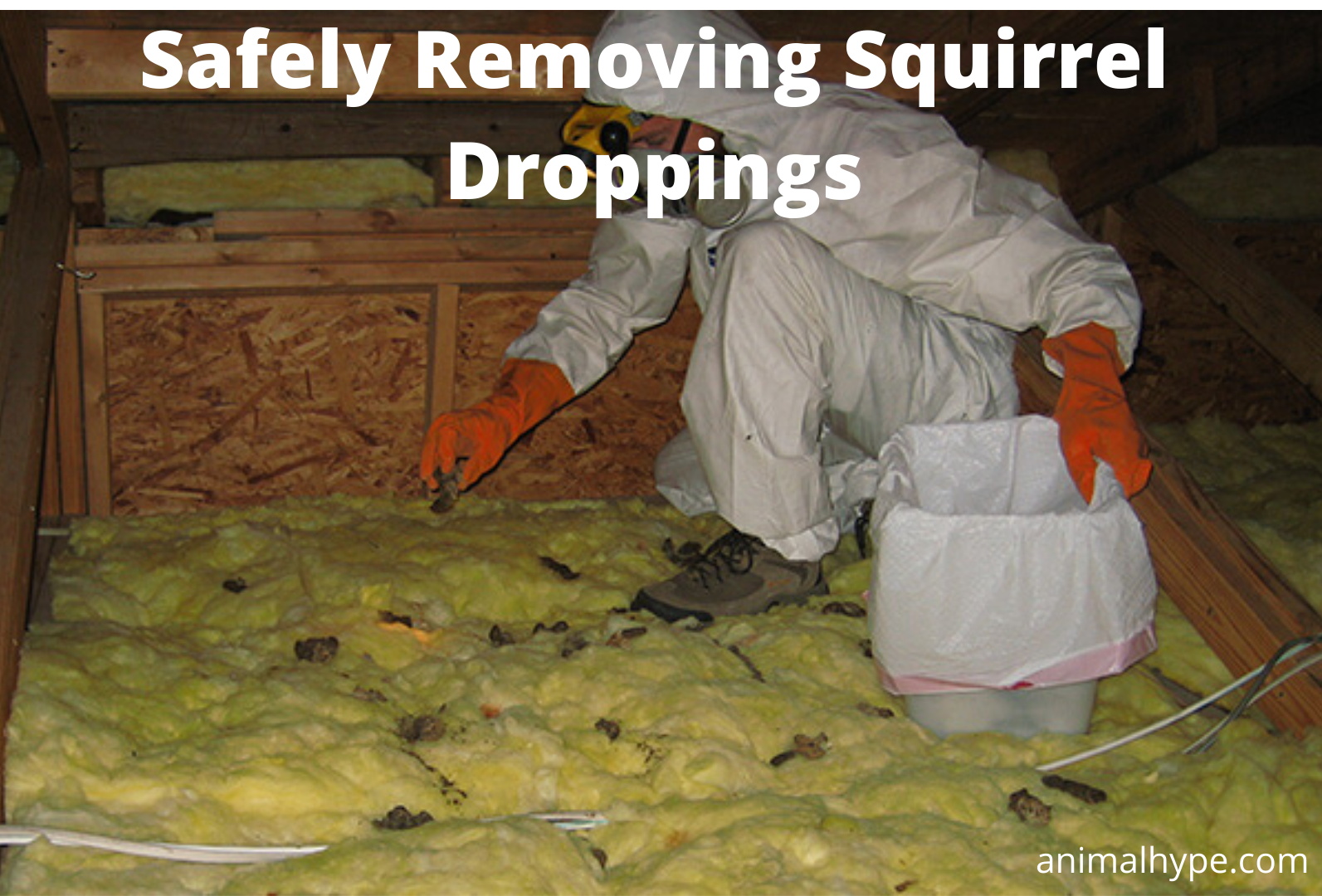 1. Wear a mask, rubber glove, and rubber boots before entering the attic or wherever the droppings are.

2. Inspect the poop, and if it has dried up, sprinkle some water over it to prevent it from getting airborne.

3. Use a shovel to clear the poop. If you find any eggs or larvae in the poop, it is advised to torch the poop because some larvae and eggs are resistant to disinfectants.

4. Disinfect the floor using bleach or any other cleaning agents. Look for any possible openings to the attic the squirrel may be using and seal them off properly.

5. Remove the mask and dispose of it safely. Also, clean the gloves and boot and keep it in sunlight for 3 to 4 hours.

6. Clean your hands with soap and disinfectants.

Make sure that you also disinfect and wash your cloth properly. Let it dry in sunlight for 3 to 4 hours. 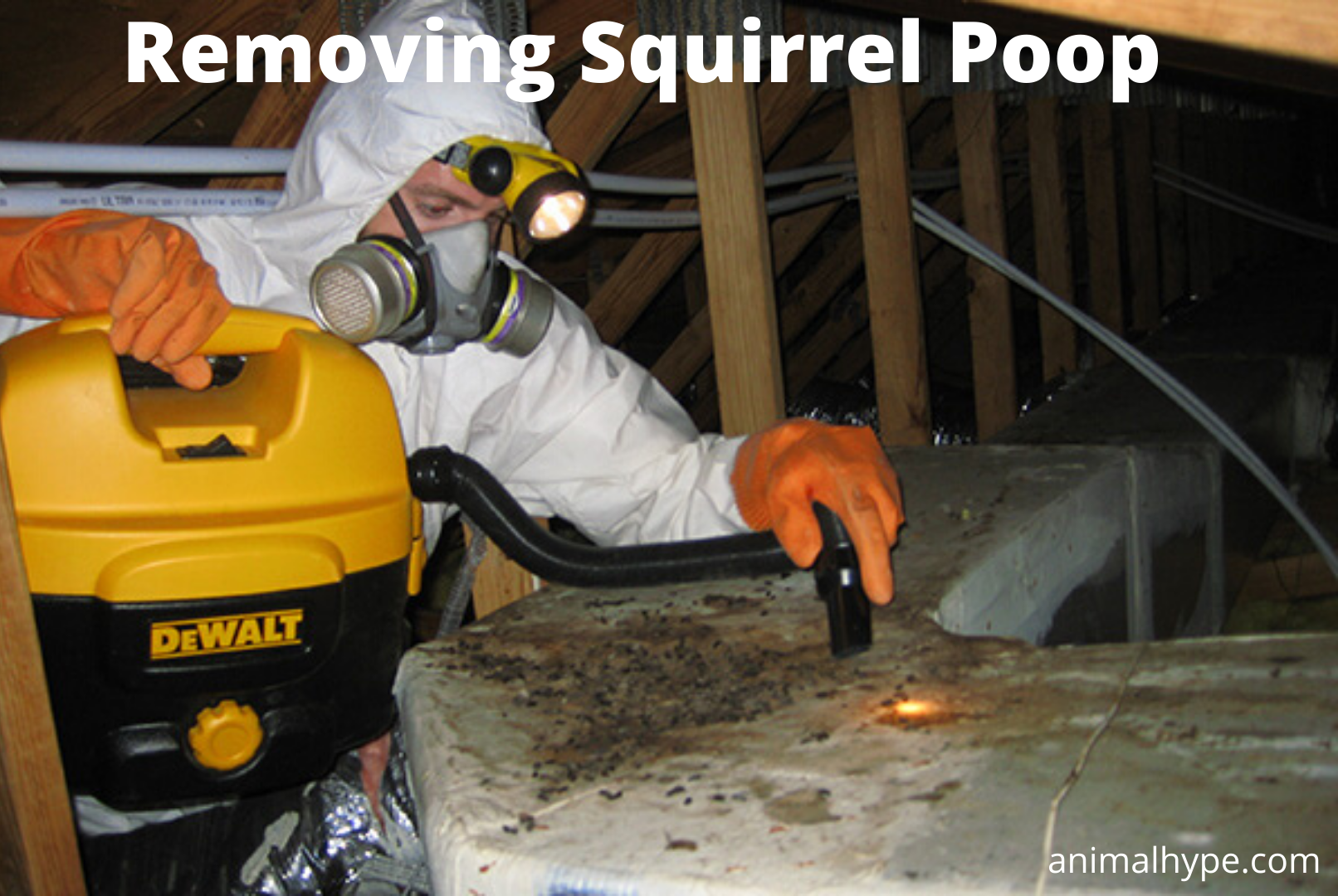 You can also remove smaller feces with the help of a vacuum.

How to humanely remove squirrels from your attics?

Always keep in mind that every organism on this planet has their right to live. You need to be extremely careful not to harm the squirrel while removing them from your property. Here are some ways to get the job done without causing harm to them.

These traps are available in the market for very low costs. Get a couple of these traps and place them in the squirrel infested areas of your house.

While keeping these traps, make sure that you keep them in places where the squirrel walks frequently—for instance, near walls or possible entry or exit points.

Use walnuts, bread crumbs, apple slices, or cheese to bait the squirrel and be patient. Once the squirrel has been trapped, take it away from your neighborhood and let it out. Make sure that you don’t handle the trap without wearing a work glove for safety.

Before you trap them and take them away, make sure that you know the regulations regarding catching and releasing squirrels. You don’t want to risk breaking any laws!

Use a squirrel repellent

Squirrels have an aversion towards strong scents. The most effective repellent against squirrels is ammonia. Spray ammonia in your attic.

The pungent smell of ammonia will keep squirrels at bay. If you aren’t comfortable using ammonia, you can also use any strong home cleaning liquids.

Also, if you have cats or dogs at home, drop their hairs in and around your attic. The presence of the scent of a possible predator will keep the squirrels away.

Another effective way to keep the squirrels away is to illuminate your attic. Squirrels have a natural aversion towards bright lights, and it can be an effective deterrent against them.

What if there are baby squirrels in the attic?

If there are baby squirrels in the attic, you shouldn’t cause them any trouble. Make sure that you give them enough time for the offspring to mature. It usually takes about 9 to 10 weeks for a baby squirrel to live on its own.

Once they are old enough, you can use the same no-kill trap to trap them and release them into the wild. Remember that the baby squirrels have a better chance of survival only when they are with their mother.