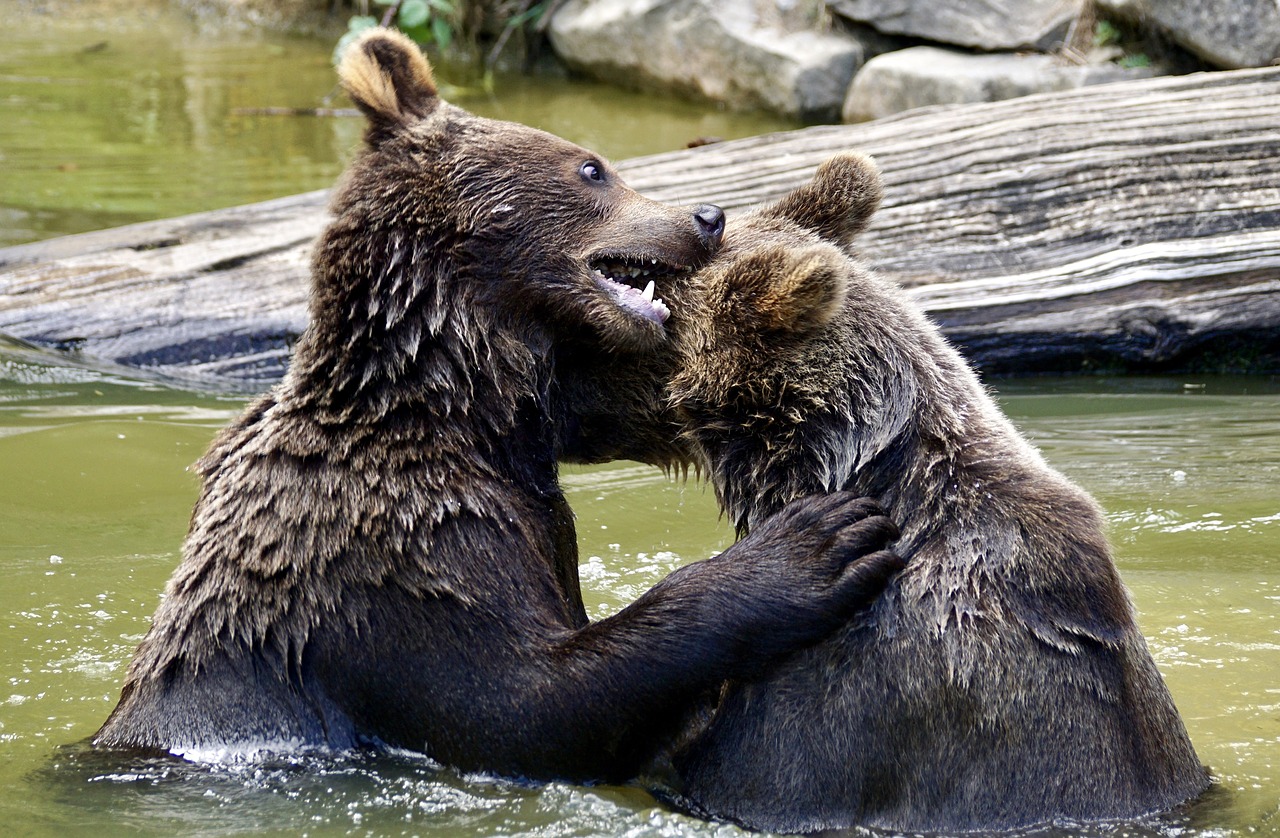 It is interesting for persons with sporting blood to speculate on which would win if some of the larger mammals of different species were matched in the arena. One engagement would not be conclusive, particularly if animals that had been in captivity for some time were used. Animals are at ‘their best in the wild state and, of two contestants, the one that had suffered most in captivity would be at a decided disadvantage.

Fortunately, from the standpoint of this discussion, a number of fights between different species of animals have been observed, either in a sports arena or in nature. But unfortunately, the details of such encounters are hard to find. 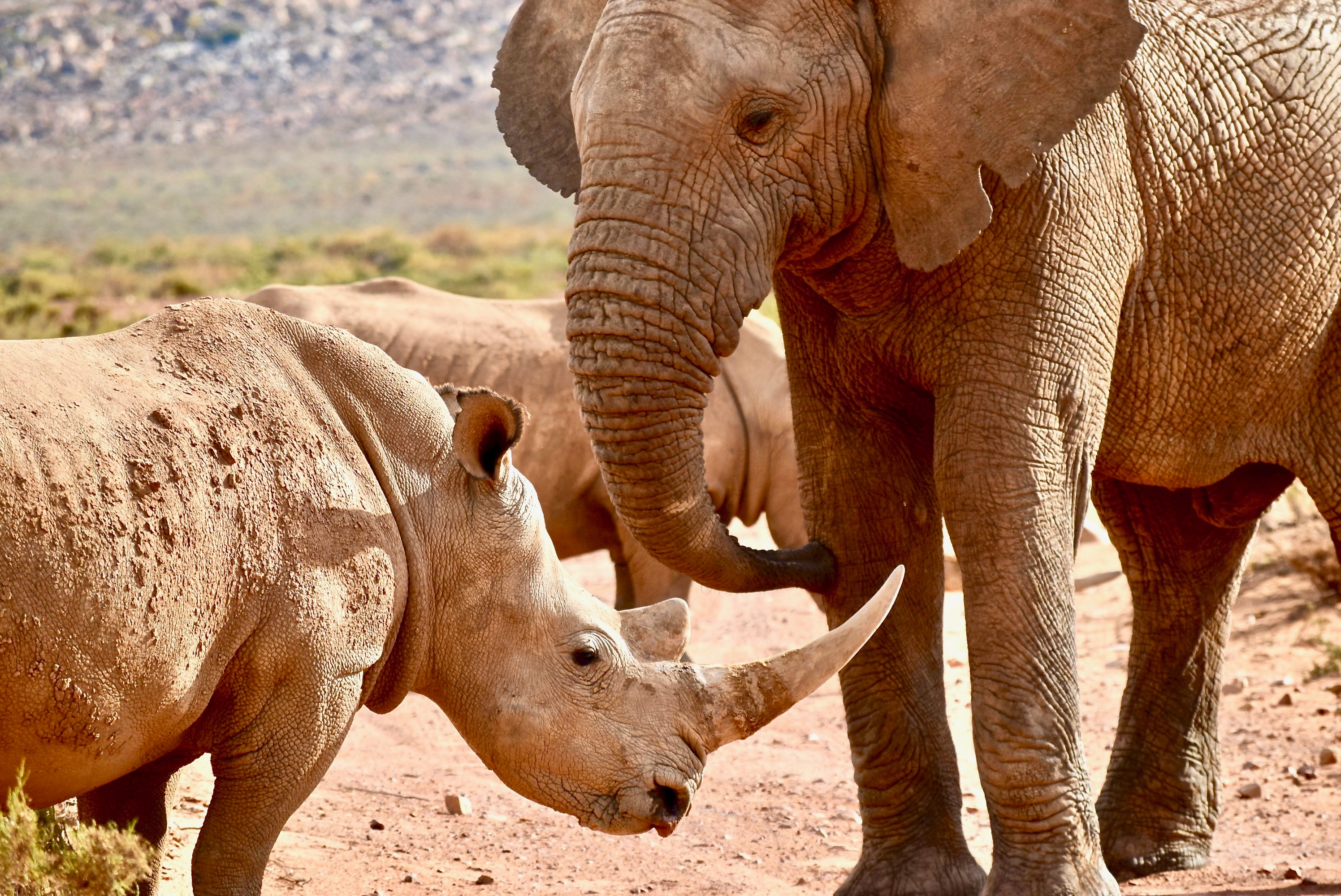 Apparently, a fight between these two animals was staged, or at least an attempt to stage one was made around 1500 by King Manuel of Portugal. I have found two entirely different versions of what was probably the same combat, although it is possible that two different fights were involved.

According to one writer, no fight developed. The two animals were brought in cages into a barricaded street, one at each end.  The rhinoceros showed great impatience, apparently, to be released so it could rush over and trounce the impertinent elephant, whereas the elephant was quite calm. When the rhinoceros was released, it lowered its head and advanced toward the waiting elephant. Doubtless, the spectators were watching these movements with bated breaths. Suddenly the rhinoceros must have decided that discretion was better than valor because it turned tail and ran, bumping into the barricade in an attempt to escape. The elephant, thereupon, turned majestically and went back into its cage.

Another version simply states that the rhino won, but no details were given and I have not confirmed this outcome from other sources.

One writer describes a fight in nature between these two animals in which the rhinoceros came off a decidedly second best. The rhinoceros started the fracas by charging the elephant. The elephant calmly seized the rhinoceros around the neck with its trunk, threw it to the ground and spit it with the tusks. The narrator did not actually see the fight, but a native who claimed to have witnessed it related the story and said that he had helped eat the carcass of the defeated rhinoceros. 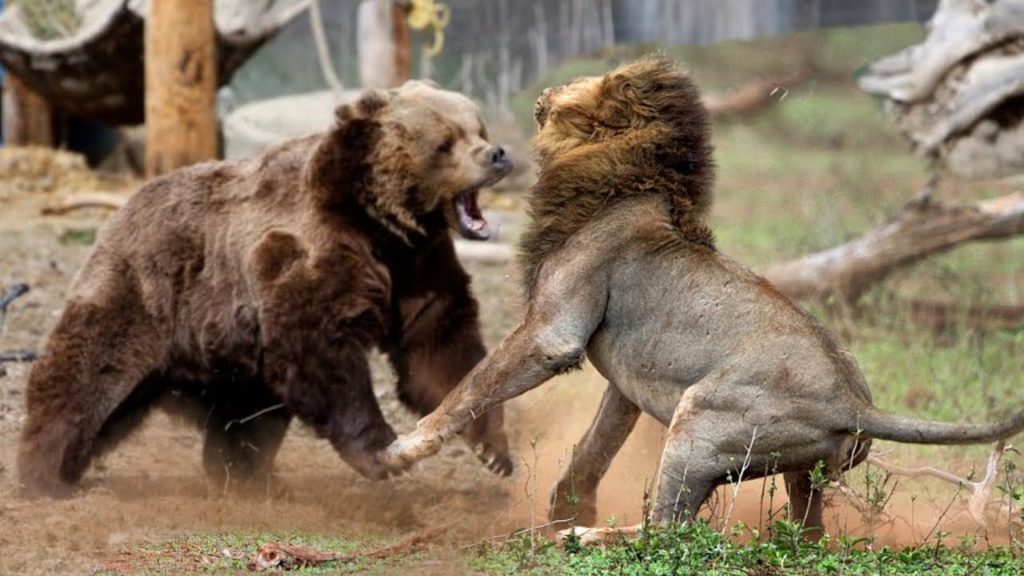 Two good specimens in prime condition would make an interesting match for spectators who were not squeamish. Some people believe that the grizzly would be the winner without much trouble, but I do not believe that the bear would be bored with the contest.

It is said that a fight between these two animals was staged in California many years ago and that the bear won, but no details of the bout could be found.

The bear, as I have pointed out elsewhere in this website, is famous for the terrific blows it can deliver with its front paws, and the chances are that if the bear could land a good solid punch the fight would end then and there. A large grizzly outweighs a lion by a good bit, but the lion’s superior agility would compensate to some extent for the difference in weight.

Grizzly Bears Versus Bulls and Bison 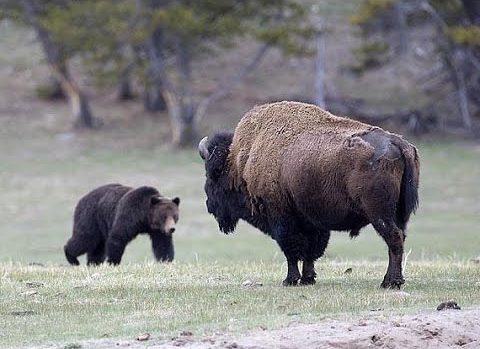 According to reports, it was the fashion to stage bear and bullfights in California before that state was admitted to the Union, and apparently, the bear was usually the victor. As the bull charged, the bear would flick out its paw, frequently breaking the bull’s neck at the first stroke, thereby with a single blow ending the fight then and there-no doubt to the disgust of the audience.

Even the great bull bison in the heyday of its existence was not safe from attack by grizzly bears. A grizzly was once seen to attack and kill four bison bulls one after the other. The first three were speedily dispatched with a single stroke for each, but the fourth was made of sterner stuff.

There was a flurry of paws and horns and, although the bison was eventually killed, the bear itself was severely wounded in the encounter.

But the grizzly bear did not always emerge the victor in an encounter with a bull. J. Frank Dobie in his well-known book, The Longhorns, tells of an instance in which a large grizzly was gored to death by an enraged longhorn. The bull was considerably the worse for wear, but he eventually recovered.

No one saw the actual fight, but a short time afterward the lacerated longhorn was discovered close to the dead grizzly, which had obviously been killed by the bloody horns of the bull. 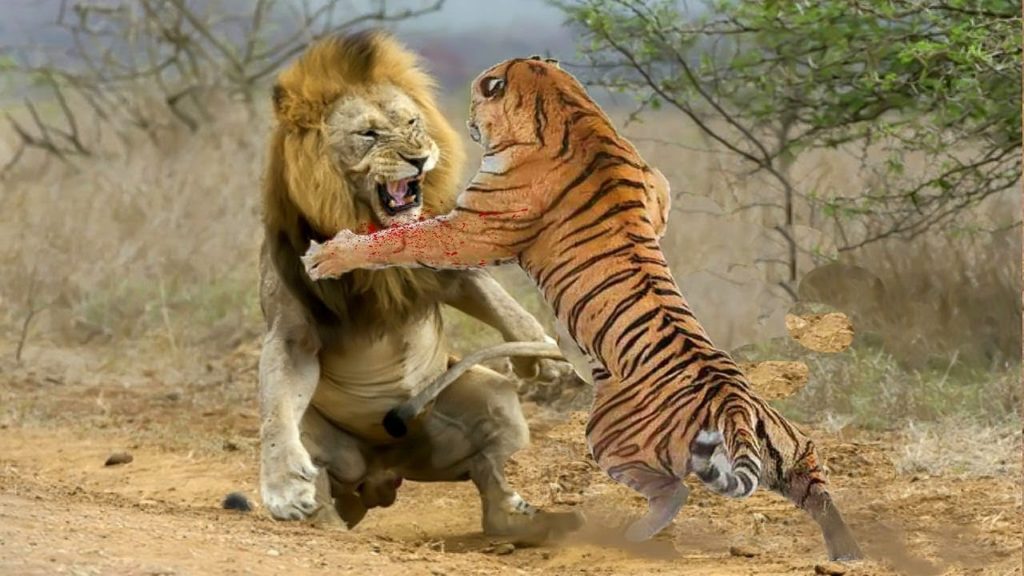 Because of the ballyhoo attached to the noble title “king of the beasts,” many people are of the opinion that the lion is capable of overcoming any animal in the world. Certainly, the “king” should be able to rule all members of the cat family.

If we are to believe the records of the old Roman arena, however, this is not the case.

During those lusty days, a lion and a tiger were frequently matched for the edification of the people of the Roman Empire, and in such a combat the tiger usually won. Most biologists who have dared to express their opinions on the subject also consider the tiger a better fighter than the lion.

There is, however, one instance on record where a circus lion killed a tiger in an adjoining cage after the two animals had broken the partition to settle their differences, but there is no record of their relative condition at the time. As I have previously indicated, all animals suffer considerably during confinement, and the one least affected would certainly have an advantage in a fight.

It is commonly believed that lions are larger than tigers, and a heavily maned lion does appear larger than a tiger of similar size. But actually, the maximum known lengths and weights of tigers are greater than those of lions.

The longest field measurement I have noted for a lion is ten feet eleven inches (including tail), whereas several tigers have been killed which were longer than this, the longest being eleven feet five and one-half inches. A weight of 500 pounds has been listed for a lion, but there is one of 700, one of 570 and another of 525 for tigers. The largest tiger skin known measures 13 feet 6 inches (certainly stretched) as opposed to eleven feet seven inches for the lion skin.

In all fairness to the dethroned king of beasts, it should be mentioned that there are more varieties of tigers than lions, and there is a considerable difference in size among the groups. It is quite possible that some lions might average larger than some varieties of tigers.

Buffaloes Versus Lions and Tigers 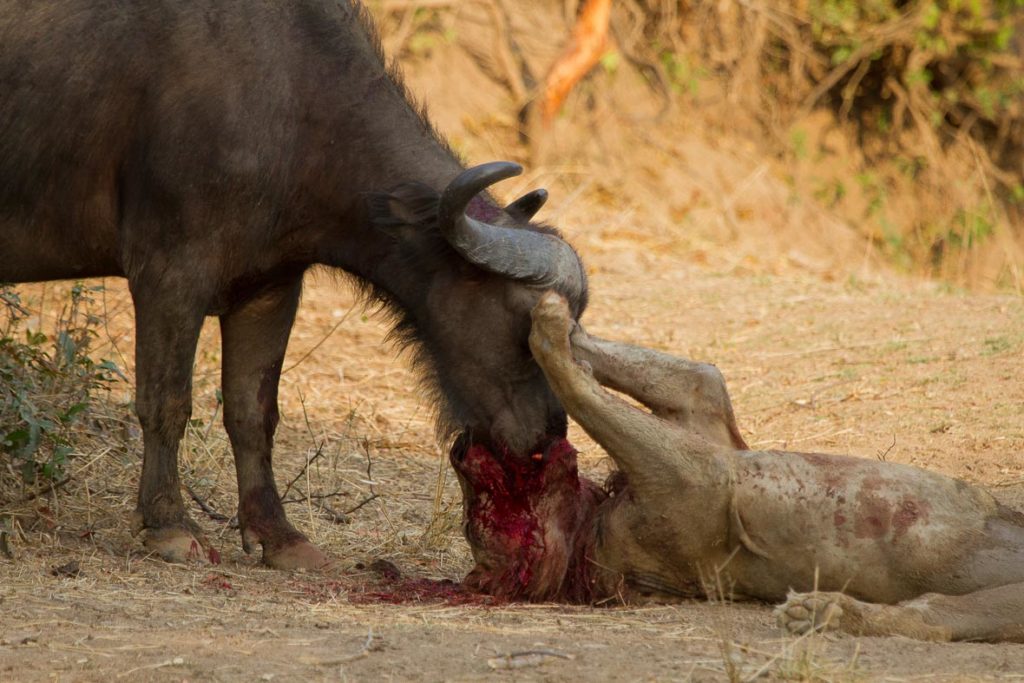 The African and Indian buffaloes are well known for the tenacity with which they hold on to life, and for their ferocity once they are aroused. Either animal would be a formidable antagonist for practically any animal in existence.

According to reports, fights between an Indian buffalo and a tiger have been staged in India, in which the buffalo usually won by impaling the tiger with its horns. But the tiger would also get in a few choice scratches and bites of its own so that the victor frequently had to be killed to relieve its suffering.

So far as has been determined, no one has ever seen a struggle to the death between a single lion and an African bull buffalo, but skeletons of the two animals have been found in a position that would indicate that such combats occasionally do occur, with death as a reward for both contestants.

One author states that an adult bull buffalo was known to object so strenuously to serving as a meal for three lions that it successfully beat off its attackers. I have seen this or a similar instance also related in several old publications dealing with animals, and, while there is no question in my mind about the objections raised by the buffalo there is a definite question about the final outcome.

It seems probable that all these stories were based upon an experience a Major Vardon and some companions had while they were hunting in Africa many years ago. The outcome of the fight was quite different.

In this particular case, one of the hunters had just wounded a bull buffalo, which was In retreat when it was attacked by three lions simultaneously. There were considerable bellowing and roaring, and paws and horns flew thick and fast but the buffalo collapsed shortly although whether from the bullet wound or from injuries inflicted by the lions is not known.

It is possible that an unwounded animal could have given a much better account of itself and the stories in which a buffalo did successfully beat off three lions may be true. But more evidence for such an occurrence must be presented before it can be accepted unquestioningly. 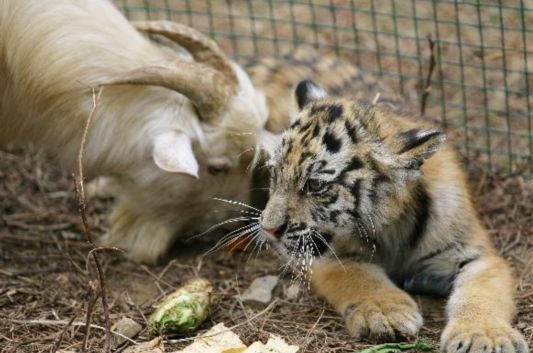 Sheep are usually thought of as docile and somewhat timid animals, but anyone who has had the misfortune to attract the attention of an ill-tempered ram knows that the male sheep can be a formidable antagonist. A solid butt from an angry ram has been known to discourage animals several times its size.

In parts of India, rams are bred for their fighting ability and are frequently matched for sport. One biologist tells of a man who had a fighting ram that was especially irascible; so, thinking to rid himself of the troublesome beast, he put it in a tiger’s den.

According to the story, the ram immediately gave the tiger a resounding butt, which apparently so stunned the cat that the ram was able to kill it.

This instance is related to illustrate how the animal fight may sometimes have an unexpected end and to emphasize the fact that a single match between different species does not allow one to form positive conclusions about their respective abilities.