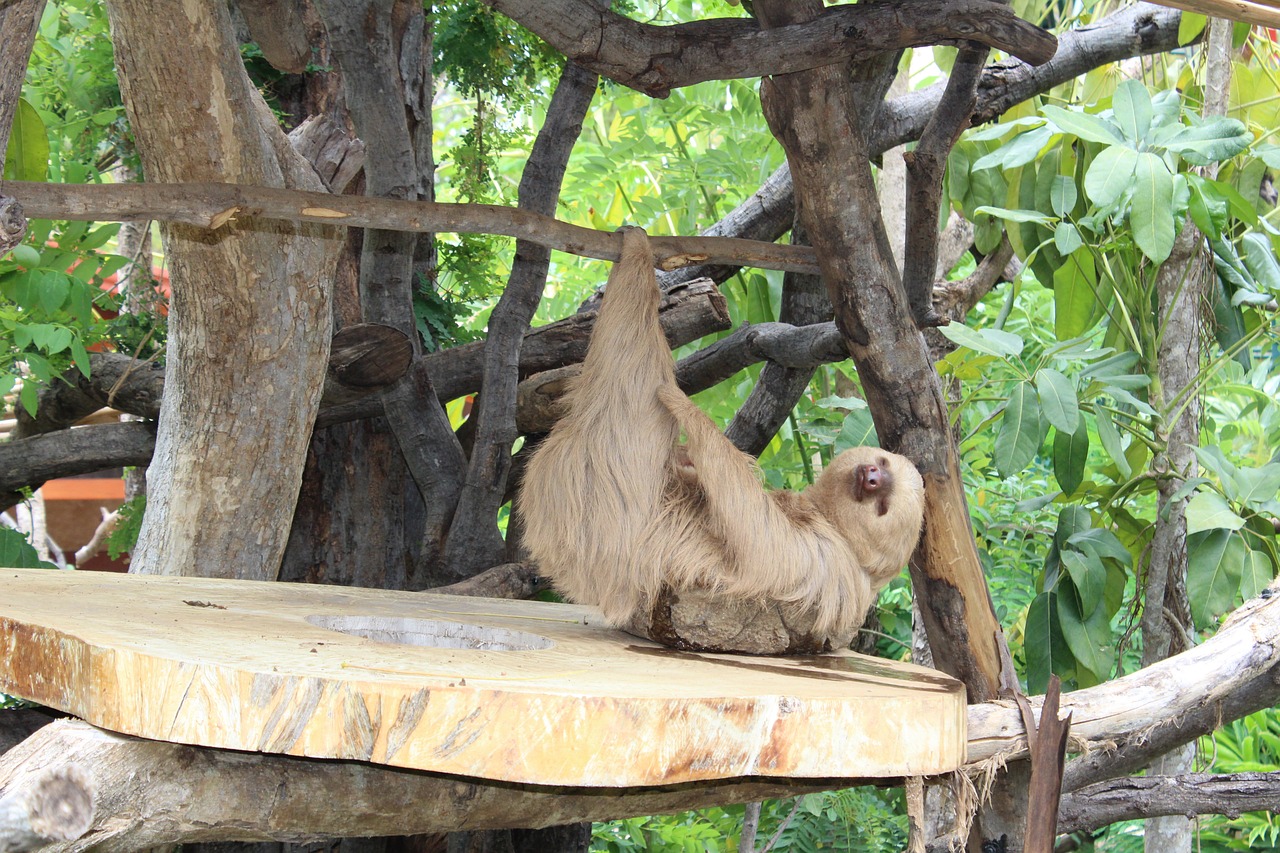 You might have all seen a sloth or at least a picture of one hanging lazily on a tree branch munching on the leaves and barks. Sloths are the slowest among the mammals on this planet and are known for their laziness.

When you think of a sloth, the peculiar characteristics that conjure up in your head might be their sharp claws, fur, black nose & extremely slow movement. But where is the tail? Ever wondered whether sloths have a tail or not? Scratching your head huh? Don’t worry in this article we will have a look into sloths and find out whether sloths have tails or not.

So, do sloths have tails? Yes, sloths do have tails but don’t be mistaken, they aren’t anything like what you imagine. When we say a tail, don’t think of it as a long coiled one or the wagging tail of a dog. The tail of a sloth is so tiny that it resembles a snout. It is so small that most of the people who do not know much about sloths miss the tiny tail hiding in all that fur if at all they see one.

That being said, the size of the tail differs between the different species of sloths. For instance, the three-toed sloths have a longer tail than the two-toed one. By longer tail we mean 2 to 3cm more!

In order to have a clear understanding, we’ll have a sneak peek into the evolution of sloths, the uses of their tail, and many other facts about them. Let us get going!

Do all sloths have tails?

Yeah, all sloths have a tail but they are not easy to spot. The tail of a sloth is more like a snout. For instance, the three-toed sloth (the one with the longest tail) has a tail that is only 3 to 5cm long. Though it does not look anything like a tail, technically it is!

Now you might be wondering what purpose do these tiny tails serve, right? In the coming sections, we will find answers to this question. But before we proceed further, let us first have a sneak peek into the basics!

Why do animals need a tail?

Before we begin discussing the tail of sloths, it is important that you have a basic idea of why do animals need a tail. For the sake of simplicity, let us keep our discussion confined to animals that live on trees (arboreal animals).

For those animals that live in the trees, the tails are prehensile. This means these tails have been evolved over the years and has become capable of grasping or holding objects. If you have seen a monkey leaping from branches to branches, you might have noticed how they use their tail for a better grip. Apart from being of help in climbing, these prehensile tails also help the arboreal creatures in foraging for fruits.

Now that we have a basic idea on the uses of a tail, let’s see how a sloth uses its tail.

Why do sloths need tails?

Sloths are arboreal animals that climb down hardly once a week and they spend 90% of their lifetime on trees. From whatever we have discussed it might be quite evident that the tail of sloth isn’t prehensile. Apart from this, their tails are hardly 5cm long and cannot help them in any way while climbing or foraging. Then what do they use it for?

These three-toed sloths use their stubby tail to dig a shallow hole near the tree they live in, to poop! Yeah, quite bizarre huh? Even more bizarre is the fact that these sloths poop only once in a week! Being the slowest and laziest mammal on earth, sloths have an extremely slow digestive system and it takes them a long time to digest the food they eat.

Apart from being the slowest it also has an inefficient digestive system. Which means that they need to eat a lot to meet their energy requirements. It is interesting to note that almost 1/3rd of the bodyweight of a sloth is its poop in its belly. That’s quite a lot of poop right?

Sloths are virtually defenseless against attack from the predators which is why they spend an entire life camouflaged on trees. And the last thing they want is, the smell of their poop signaling the predators.

They use their stubby tail to dig a shallow hole to poop and cover this hole with leaves and sand!

Did the ancestors of sloths have a tail? 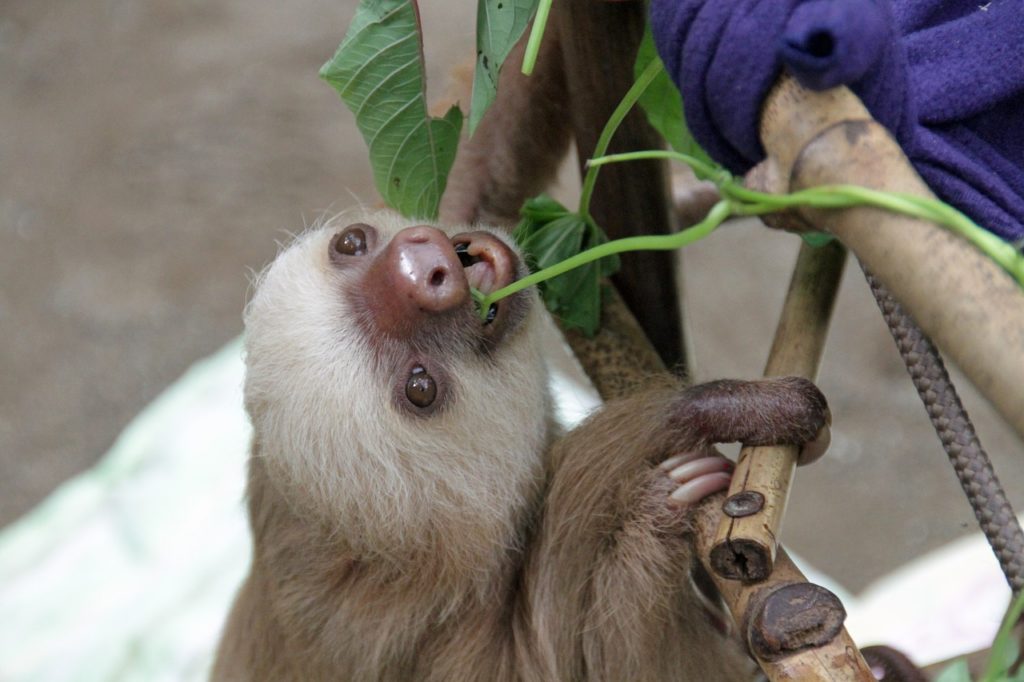 Sloths have been a matter of fascination for the biologists and they have learned a great deal about them from the fossils of their ancestors. These paleontologists found out that the ancestors of the present-day sloths were very different from the ones we see today. It is important to note that most of these ancestors where ground sloths and not tree sloths.

The fossils obtained & the mummified remains of sloths obtained from Chile & Argentina suggest that these ancestors had a strong pelvic bone, stronger hind limbs & vertebrae. These characteristics point out to the fact that at least some of the early sloths could walk bipedally. Most of these sloths had hand & claws that look suitable to manipulate foliage which strongly supports the argument that the early sloths were bipedal.

An important thing to note here is that it appears from many of the fossils that sloths had a robust tail. It is interesting to note that this robust tail was much longer than the tail of the present-day tree sloths and it touched the ground. This suggests that they may have used this tail to sit in a tripodal posture by balancing its body weight on its tail and then stand on its feet to reach out to trees with their hands.

There is another group of researchers who claims that the ground sloths were good swimmers like the tree sloths and their long tail helped them in swimming.

The evolution of ground sloths – From having a long tail to tree sloths with a small tail!

As mentioned earlier, ground sloths which were the early ancestors of the present-day tree sloths lived in the ground and had a robust tail, strong hind limbs. The fossils of the ground sloths also indicate that most of these animals were plantigrade (animals that place the entire foot surface on the ground). Over the years they evolved from being plantigrade animals to animals having pedolateral foot.

Gradually when these ground sloths evolved to being tree sloths, they had sharp claws to help them seamlessly climb a tree. And the tail became virtually of no use and at it is believed that at some point in time they evolved to having small tails as we see today.