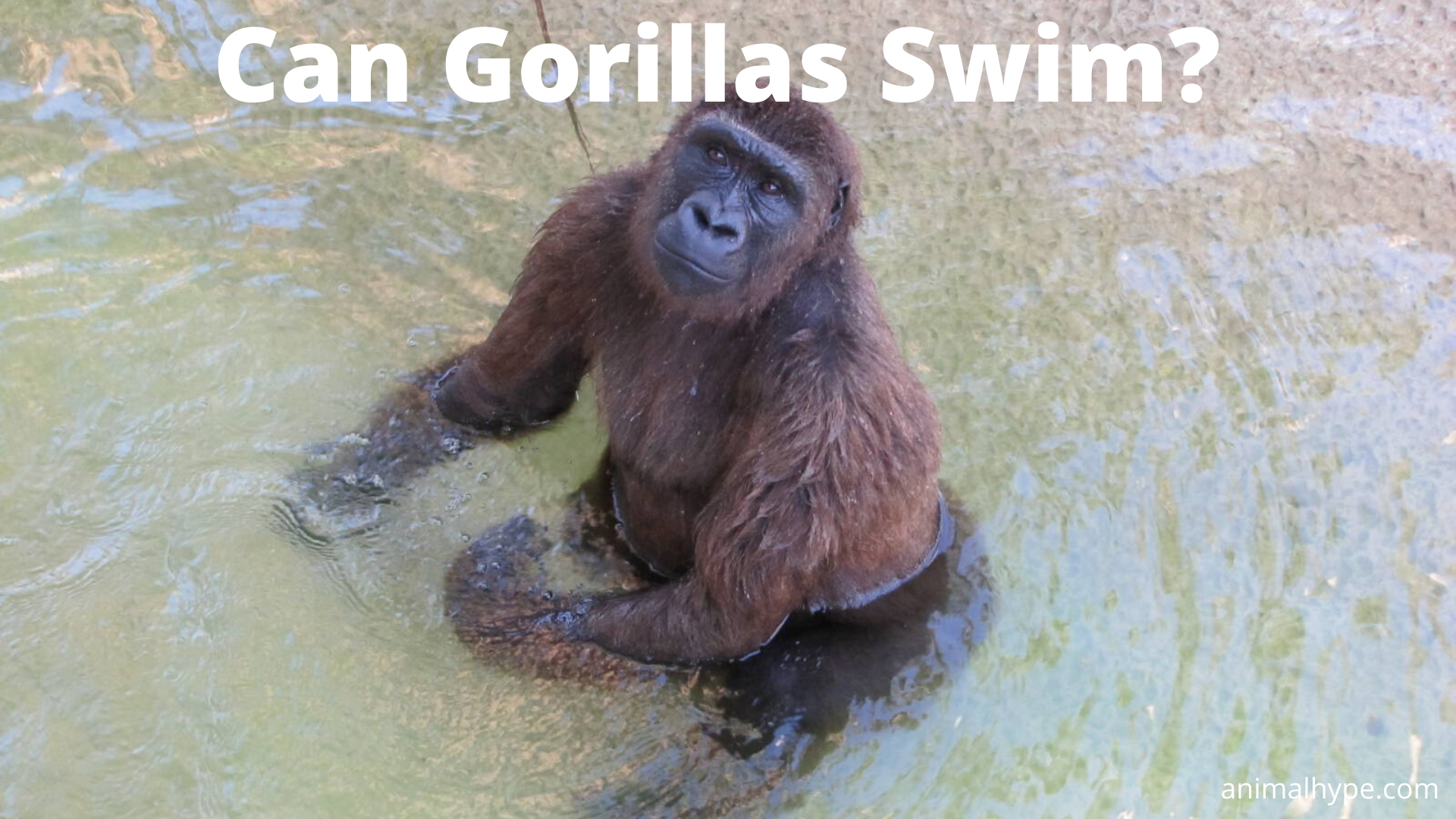 Gorillas are gentle yet intelligent giants that are mainly found in Arica. It is indeed interesting to note that Gorillas have a lot in common with human beings than any other animal. If you look gorillas from a genetic point of view, you can see that a gorilla’s DNA is almost 98% similar to that of humans.

Apart from which Gorillas have many inhibitions, fear, and interests that are similar to that of human beings.

For instance, similar to most humans who hate being caught in the rain, a gorilla doesn’t like it either. Unlike the other wild animals, gorillas have a natural aversion to water.

When caught in surprise by rain, gorillas will look for a nearby shelter or cave to get away from the rain. Well, that’s not it, gorillas are extremely cautious about water bodies similar to a human who doesn’t know how to swim.

There have been reported incidents where a captive gorilla was found to use a stick to measure the depth of a pool in its enclosure before getting in.

So, can gorillas swim? The natural aversion to water points out to the fact that gorillas are not natural swimmers. But there have been recent studies that claim that gorillas in captivity could be taught to swim.

In this article, we will have an in-depth look at gorillas, their aversion to water, and many more interesting facts about them.

Do gorillas swim in water?

No, gorillas do not swim in the water. Gorillas, similar to chimps, apes, and humans are not natural swimmers. It is for this reason why most of the zoos have a deep pool of water surrounding the enclosure of gorillas or other apes. Gorillas are highly intelligent animals, and they won’t step into any deep water body.

In fact, in their natural habitat, a gorilla seldom has to encounter water. They are herbivorous animals, which means that they don’t have to get into the water for food.

Well, not just food, unlike other animals in the wild, gorillas rarely have to go near water bodies to drink water. A gorilla can absorb enough water from its food and the morning dew that they seldom drink water.

In short, a gorilla doesn’t need to encounter a river or any water body for that case when it comes to survival. And naturally, they are not adapted to swimming.

They are both herbivorous animals and do not have to swim for survival. Yet the former can swim while the latter can’t.

When it comes to a cow, they are naturally buoyant in water because of their large lungs and lengthy gas-filled intestine.

Cows have enough buoyancy to keep their nostrils just out of water. Well, this buoyancy can also be attributed to their fat ratio. If you have seen a cow swimming, you might have noticed that the way they paddle with their limbs are similar to how they walk on land. In short, there is nothing different a cow has to do to swim.

This isn’t the case with a gorilla. A gorilla’s lung isn’t as large as a cow; neither are their intestines long enough to generate enough buoyancy. Apart from this, a gorilla is a muscular mammal, which means that they have lesser fat in their body.

Low-fat content clubbed with smaller lungs and intestines means that a gorilla can’t easily float in water. Even if they were to float, they can’t keep their head out of water.

Another important reason why a gorilla can’t swim is because of the way they walk. Unlike a cow who is a four-legged mammal, a gorilla doesn’t walk on all four legs like a cow. Owing to which a gorilla can’t use the same motor movement as they use on land when in water.

Can a gorilla be taught to swim?

For many years, biologists believed that gorillas and other apes were afraid of water and hence wouldn’t step into the water.

But they were proven wrong when a captive chimpanzee in Missouri jumped into the pool and swam effortlessly.

This chimp was brought up in captivity and has learned to swim from humans. It was quite surprising to biologists, who believed that these animals were afraid of water.

Let’s go back in time to the point where the ancestors of gorillas and other apes were arboreal animals. It is important to note that these animals rarely set foot on the ground and had devised ways to cross rivers through treetops. This gradually led to aversion towards the water.

But from the way the captive chimp was enjoying diving into the pool and swimming has puzzled the biologists. If a chimp could learn swimming, a gorilla too can. But it is a question of how to teach them and whether they want to learn swimming or not.

Though gorillas have a natural aversion towards the water, the baby gorillas in captivity are found to enjoy playing in the water while the elders closely watch them.

The two main reasons why gorillas aren’t instinctive swimmers are because they are not naturally buoyant, and their natural motor movement cannot keep them afloat to help them move in the water!

A baby gorilla or an adult will drown minutes within entering the water, and it seems that the gorillas are aware of it too. It was once observed that a female adult gorilla used a stick to gauge the depth of the swamp it was going to cross to ensure safety!

We can’t be certain about whether they hate rain or not. But yeah, these gentle giants don’t like getting themselves drenched in rain. The gorillas in captivity are found to seek shelter in enclosures when there is a heavy downpour.

Not just the gorillas, apes, in general, are found to have an aversion towards getting drenched in rain much like humans. If at all they get drenched, they are found to dry themselves up.

Well, this isn’t quite the case in their natural habitat. When caught in the rain unexpectedly if there aren’t any shelters nearby, the gorillas would stand still until the rain subdues.

It is interesting to note that among the apes, orangutans have come with an excellent adaptation to deal with the rain. The orangutans that live in rainforests are found to make protective hats or canopies using leaves from trees to keep themselves dry.

Are gorillas afraid of water?

Well, just because a gorilla has an aversion towards water doesn’t mean that it is afraid of water. It is similar to a human who doesn’t know swimming being cautions while getting into the water.

It is just that gorillas don’t prefer getting into the water. There have been many cases where the gorillas have been spotted walking through swamps with water level up to their chest.

Similarly, the gorillas that are born in captivity or zoo are found to enjoy playing in the water.

Where do gorillas drink water from?

This is one of the common questions we encounter when we say that a gorilla doesn’t prefer being near water in their natural habitat. It is pretty obvious to have doubts too!

The answer to these questions lies in the fact that gorillas seldom drink water. In their natural habitat, the diet of a gorilla mainly consists of 86% of shoot, stems and leaves, 2% fruits, 3% flowers, 2% flowers, and 7% roots.

It is from the food that they eat they absorb the required amount of water. Apart from this, they also get adequate moisture from the morning dew. Yeah, gorillas are early birds!

It is rather interesting to note that the biologists believed that gorillas never drink water in the wild until recently when they spotted a gorilla drinking water from a stream. It isn’t clear as to why they show this behavior.