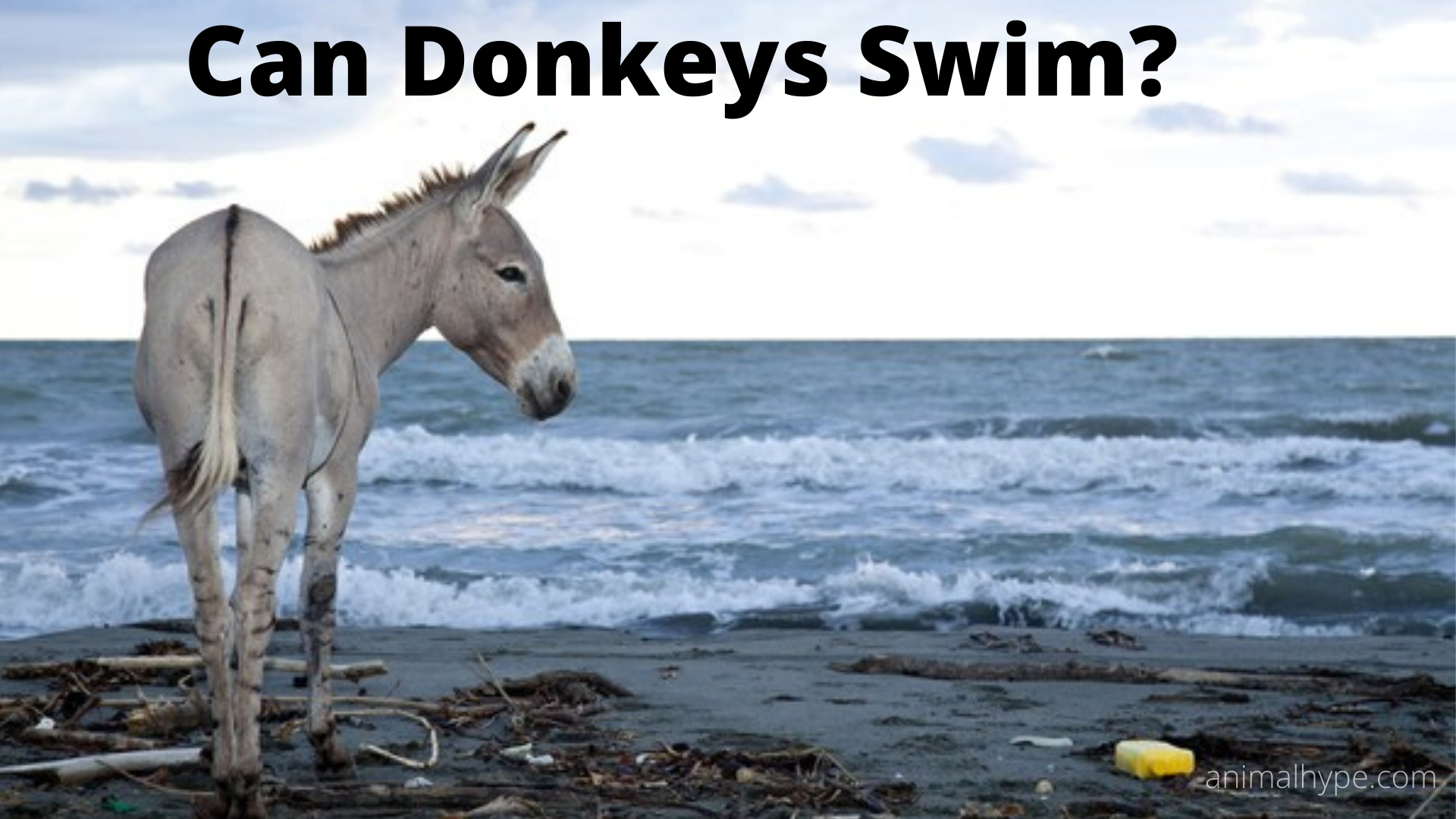 The close relationship between humans and donkeys dates back to almost 5000 years. Widely known to be the ‘beasts of burden’, donkeys have played a big role in shaping and expansion of human societies. Being a stoical creature, they can carry a great amount of luggage and traverse across varying terrain.

Donkeys still remain a lifeline to many communities in the world that live in remote locations. For them, donkeys play a crucial role in their economy and social life as they rely on donkeys to carry construction material, farming products, supplies, and many more.

Even today, in some parts of Africa, Donkey carts are used as a primary mode of transport and ambulances in case of medical emergencies.

Donkeys are capable of traversing through various terrains and can carry a good amount of luggage too. Owing to this, donkeys have always been a great companion to nomadic humans.

What makes donkeys an ideal companion to the nomads is because of their ability to keep a steady pace. But can donkey’s swim? If they can, how long can they swim?

Yes, donkeys are excellent swimmers and can swim effortlessly. But that doesn’t mean that they love swimming. Donkeys, in general, are found to stay away from water, and they won’t get into the water easily.

In this article, we’ll have an in-depth look into how a donkey swims, the reason why donkeys are scared of water, and many other interesting facts about them.

How do donkeys swim?

Donkeys do not need to be taught how to swim. Being natural swimmers, they will swim the moment they are in deep water. In fact, it is important to note that because of their large air-filled lungs and loops of gas-filled intestine, donkeys are naturally buoyant.

All that they need to do is to use their limbs to paddle across the water. Though donkeys are naturally buoyant, it is important to note that they are just buoyant enough to keep their nostrils out of water. They balance themselves by moving their legs like how they would when they trot.

As long as a donkey is loaded with a weight that it can manage, it can effortlessly cross any stream or river. For a donkey to continue swimming, they must be able to keep their heads above the water level.

The moment water enters their nostrils or ears, they will start panicking and most probably lose balance and drown.

Though donkeys are good swimmers, they are very hesitant when it comes to getting into the water. If you own a donkey and want it to get into the water, you must first train it to overcome their fear of water.

Why are Donkeys hesitant to get into the water?

Though donkeys are good swimmers, they are at risk when they are in the water. As said in the previous section, they are buoyant enough just to keep their head above the water.

One slip is all that they need to drown, which is why you need to train your donkey to overcome their fear of water. Donkeys are known for their stubbornness no matter how much you force them; they are not going to step into the water until they are comfortable.

One of the many reasons why donkeys are not comfortable swimming is because they can’t afford to get water into their ears. A donkey’s ear doesn’t have a drain to remove the water that gets in. Their ear canals open to the sack-like caverns on the side of their face.

These caverns do not have an opening. This means that in case water enters their ears, it will get into their caverns and cause severe infection. Caverns have immense anatomical importance as it houses important nerves, and it has to be protected.

Another reason why donkeys are hesitant towards swimming is that unlike horses, their hairs are not covered in the waterproof grease. And donkeys don’t prefer getting drenched, which is why you don’t see your donkey stepping out of their shelter when it’s raining.

How to make your donkey swim? 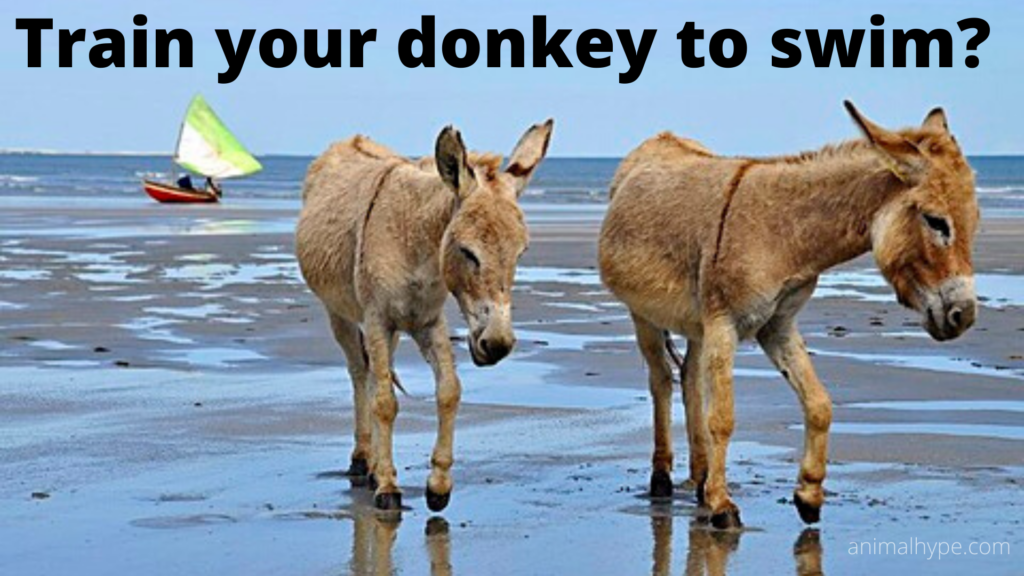 Now that you know how hesitant donkeys can be towards getting into the water, the question lies in how do you make them swim? If there is one thing about donkeys that you ought to know, it is that they are very stubborn.

Though donkeys are found to be stoical, they have a great sense of self-preservation. It means that they won’t do anything that can be dangerous or possibly cause harm to them. For most donkeys, water is a threat and they are not going to get into the water easily.

You cannot force the donkey to step into the water because they won’t do anything until they are certain about their safety.

The first and foremost step when it comes to taming a donkey is to earn its trust. This is something that cannot happen in a few days. You would need to slowly earn its trust and persuade them that you would never cause them harm. Once you have the donkey’s trust, you will notice that they are quick learners.

You don’t have to teach your donkey to swim. All that you need to do is make them feel comfortable to get into the water. You can do this by taking the donkey to the edge of a river or any water body for that case.

Use the halter to bring them close to the water and give them time to feel comfortable. Once they are comfortable, they will follow you into the water.

Can donkeys swim while carrying luggage?

Yes, donkeys can swim while carrying luggage. But the question lies in whether you want to take that risk or not? As said earlier, donkeys are just buoyant enough to keep their heads out of water.

This is with dead weight, as in when the donkey isn’t carrying anything. That being said, a donkey can swim while carrying some luggage.

How much weight a donkey can carry while swimming entirely depends on the height and weight of a donkey. A good rule of thumb while loading a donkey to cross a river is to load them with less than 20% of its body weight.

Before you choose to make your donkey swim with luggage, it is important that you clearly understand the risk involved in it. A donkey can naturally keep its head just above the water level, and rest everything is managed by their legs. In case the luggage is heavy for the horse, it cannot keep its head above water.

The moment this happens, the donkey will start panicking and, in the worst case, drown with the luggage. And you don’t want that to happen, do you?

Can I ride on a donkey while crossing a river?

Well, that entirely depends on how much do you weigh. Donkeys aren’t strong enough to carry humans like a horse. Technically a donkey can only carry 20% of its body weight that’s about 20kgs.

Anything more than that can injure the donkey. It is not safe to ride a donkey while crossing a river because if the donkey’s head gets below the water level, they will panic.

The scared donkey will try to push you down and stand on top of you and out of the water, which is why it is advised not to ride a donkey while crossing a river.

How long can a donkey swim?

How long a donkey can swim depends on their energy and power. You need to keep in mind that donkeys are not meant for swimming; rather, they are land animals.

It is only because of their large lung and a looped intestine they remain buoyant. But they cannot remain buoyant in the water without paddling with their legs.

This is where energy and power come to play. For instance, if you have walked your donkey for 15-20 km with luggage on them, you can’t expect them to swim right after the walk. Similar to humans, they need to rest before they can keep moving.

Another decisive factor is how the luggage (If you have loaded them) is. You can’t expect your donkey to carry heavy loads and cross a river. Ideally, a healthy donkey can swim for 4 to 6 minutes in water.