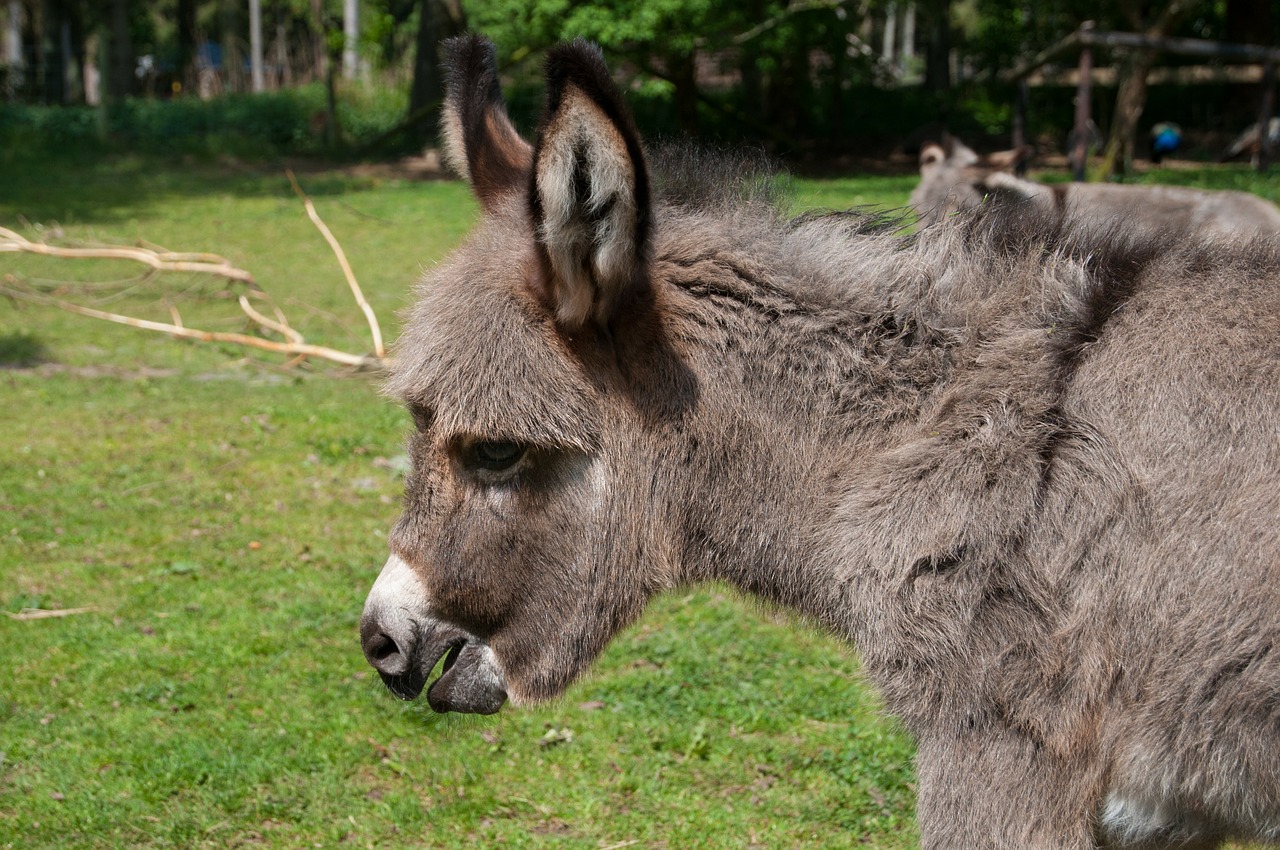 A baby donkey cannot get enough of cuddling

Baby donkey having a good time in a hammock

Donkeys figure out a way to escape

Miniature donkeys and their cute lifestyle

Cute baby donkey loves to play with a pillow

Baby donkey running around and enjoying her freedom

A baby donkey has leg supported in casts

What is a baby donkey called? 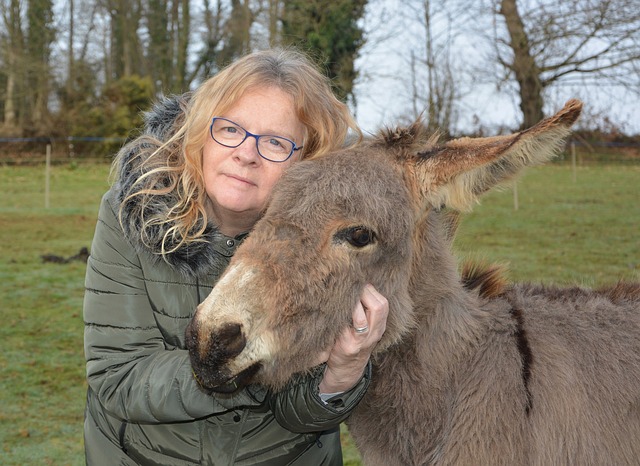 Note that jack donkeys are mated to female horses to give mules. When a jenny is mated with a male horse or a stallion, the offspring is known as a hinny.

How many offspring does a donkey usually have?

The female donkey, also known as mare or jenny usually gives birth to one baby after a pregnancy of one year.

Foals weigh 19 to 30 lbs during their birth. They are capable of standing on their own feet 30 minutes after taking birth. Females usually give birth to one foal every year.

There is a considerable amount of time involved in the rebreeding of a jenny. Besides, the gestation period is also lengthy up to around a year, while this can also reach a maximum of 14 months on some occasions.

Hence, it is mostly impossible for a jenny to have one foal every year. Therefore, donkey breeders expect less than one foal per year. They usually plan for three foals for four years.

What do baby donkeys eat?

A baby donkey drinks its mother’s milk until it is 6 months old. Besides, it starts to taste its mother’s food after 2 to 4 weeks of age.

What is the lifespan of donkeys?

Donkeys live up to 25 to 30 years when in the wild. Their average lifespan is 33 years.

With appropriate care and protection, donkeys can live long into their 30s. Note that in the poorest nations, donkeys have an average life span between 12 and 15 years. Meanwhile, in well-off nations, they may live to between 30 and 50 years of age.

For how long does a baby donkey remain with its mother? 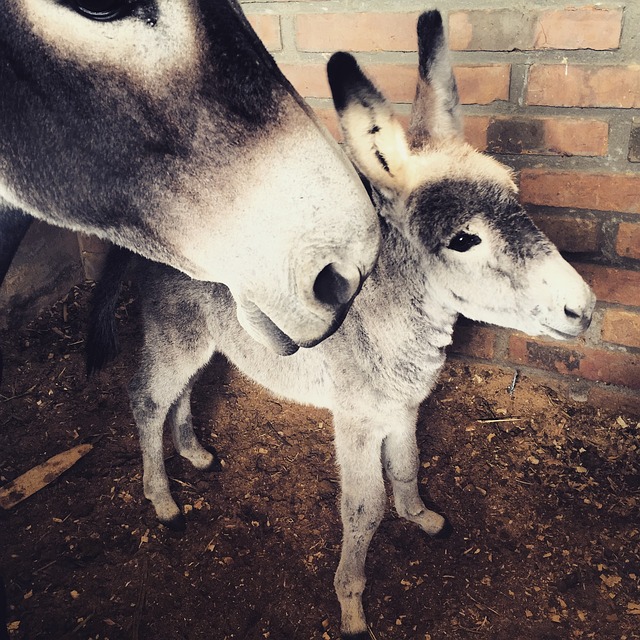 A baby donkey or foal stays for about 4-6 months in the protection of its mother.

When are baby donkeys weaned?

Weaning is the process of becoming familiar with food other than the milk of a baby’s mother. Baby donkeys wean when they are 5 to 6 months old.

When do baby donkeys learn to nurse?

Baby donkeys stand up on their feet as early as 30 minutes after their birth and start nursing.

How long do donkeys carry their babies?

A jenny stays pregnant for an average period of 12 months. However, the gestation period lies between 11 and 14 months, finally giving birth to one foal.

Cases of twin births are rare, and the probability is lower than in horses. Only close to 1.7 % of pregnancies in donkeys lead to twins. Out of these, both foals survive only in 14% of these occasions. 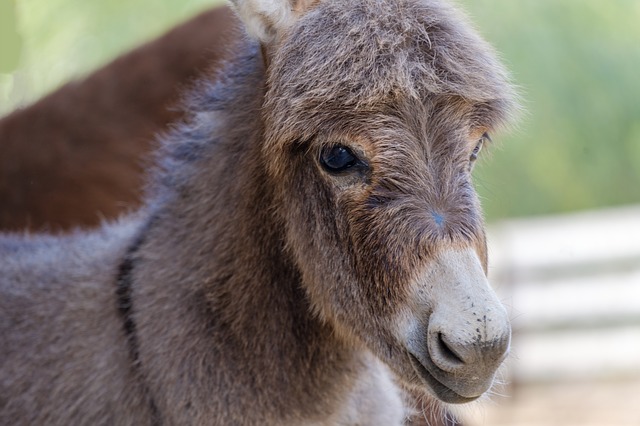 Baby donkeys are friendly in nature. Adult donkeys have an infamous reputation when it comes to being stubborn. This is said to be caused by a sense of self-protective nature.

Apparently, they have an instinctive fear of predators apart from a poor relationship with humans. Hence, it is difficult to make a donkey do things that it considers dangerous. However, after earning their trust and companionship, one can easily work with them.

Donkeys are generally intelligent, playful, and cautious animals who like to learn.

How good is the memory of a donkey?

Donkeys are known for their excellent memory power. Research by the Donkey Sanctuary in 2013 showed that they have similar problem-solving speed as dogs and dolphins. All these suggest that they remember their experiences, good or bad, for a long period.

Negativity and uncomfortable situations impact their behavior. Hence, it is important to handle them with great care. 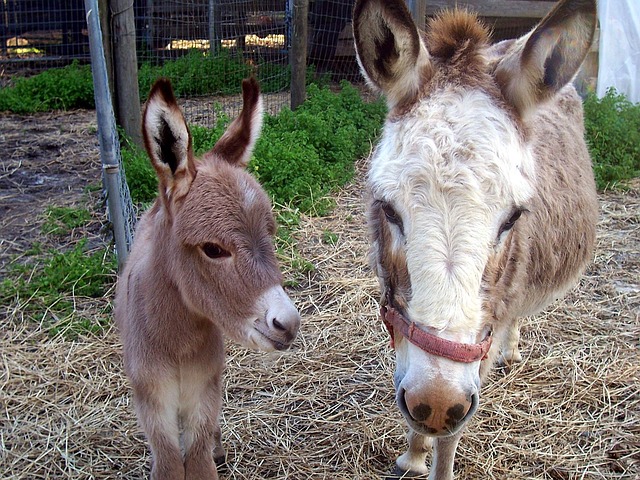 Donkeys are known to have excellent smelling capacity. In fact, they have a better ability compared to human beings although lesser than that of dogs.

They use this ability in their daily lives. For instance, they avoid unclean water smartly. They also keep away from poisonous plants. They display the ‘Flehmen response’.

It is a habit in which they curl their upper lip exposing their front teeth upon smelling something new. They do this to transfer the new smell to the Jacobson’s organ situated at the top of the mouth that detects the smells.

Baby donkeys are born with eyes to the side of their head similar to many ‘non-predator’ animals. This is to help them see behind them and detect predators easily.

Donkeys have horizontally placed oval pupils like several hooved animals. These pupils help them get visibility of 320 degrees, although it lets them view with one eye at a time. They can see for a large distance behind them.

Donkeys can view objects directly in front of them with both eyes (binocular vision). They usually look at their threats using their binocular vision by moving their heads around.

Besides, they have a clear idea about different colors. Due to the presence of more rods in their eyes, they have much better night vision ability than human beings.

Where do donkeys belong?

Donkeys have their evolutionary roots in Africa. Hence, they are also built with adaptations to cope with the harsh climates of the continent.

Are there any specialties to the digestive system of the baby donkeys? 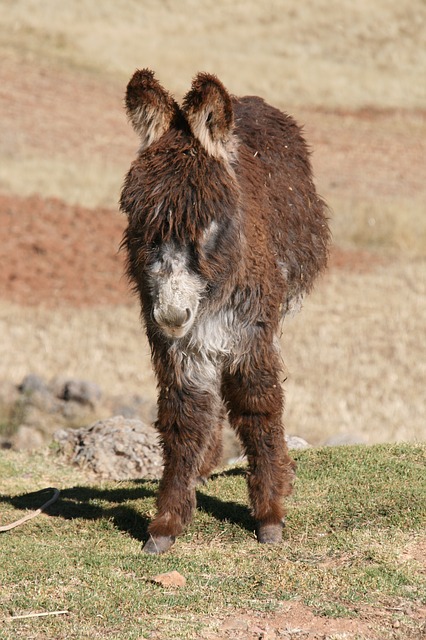 Baby donkeys are born with a specially designed digestive system. As they grow older, it allows them to consume coarse vegetation that the majority of the animals would not eat.

How do they cope with varying climates?

Donkeys, due to their origin in Africa, have developed features that help them navigate and survive in diverse climates.

Donkeys are capable of staying without drinking water for long periods. Further, they have the ability to lose 30% of their body mass through water and still face no serious consequences. Note that they can recover all the lost water by drinking for 5 minutes.

Donkeys evolved from regions with food scarcity. They usually had to spread out to large distances to find food although they stayed close to each other. Hence, they developed sharp ears that could detect faint noise from large distances. They communicate through loud braying that lasts for almost 20 seconds. They can pick these sounds from as far as 3 kilometers.

Can baby Donkeys tread in all terrains? 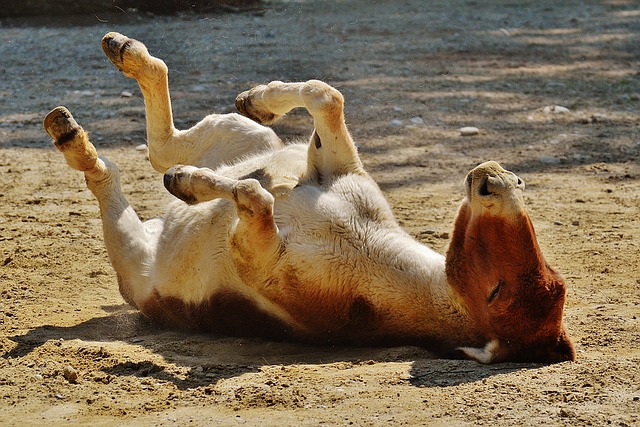 Baby donkeys are born with small cup-shaped hooves that allow more agility. It enables them to climb over steep slopes and move through rocky surfaces with ease.

What happens if donkeys sense something wrong?

Donkeys have a reputation of being stubborn if they sense something wrong. They usually stop their activity if they find something uneasy.

In case they attack, they do so by biting or attacking with front hooves or striking with the hind hooves.

Why do donkeys have large ears?

Donkeys developed large ears in order to pick up sounds from long distances as they spread out in search of food. Besides, larger ears help them cool down their bodies faster. These adaptations developed as it survived in harsh conditions.

What about the sense of taste among baby donkeys?

Baby donkeys start tasting their mother’s food once they are 2 to 4 weeks of age. As they grow up their taste sense develops excellently.

Donkeys’ tasting sense is linked to their smelling ability in that they are well developed. They have taste buds that help them differentiate tastes. They can detect sweet, sour, bitter and salty foods out of which they prefer sweet and salty items.

Further, they refuse to eat musty food and keep away from unclean containers.

They have close to 25,000 taste buds like other herbivores. These help them sense edible plants as well as the non-edible ones.

What are some of the common baby donkey gestures?

Baby donkeys inherit many traits from their parents. Donkeys are known to express their feelings through gestures.

Common gestures like stamping over the hooves and scraping on it show their frustration or unhappiness about something. This is commonly observed when they have had enough of what is happening around them or when they are being forced to do something.

If they place their ears flat along their neck, it shows their unhappiness towards other donkeys. This is observed commonly in donkey herds if they dislike what other donkeys do. Examples include getting too close, pushing away each other to grab food, or trying to interact. Donkeys understand the message of flat ears.

The swishing of the tail is another signal of annoyance.

What is the special feature of the teeth of baby donkeys? 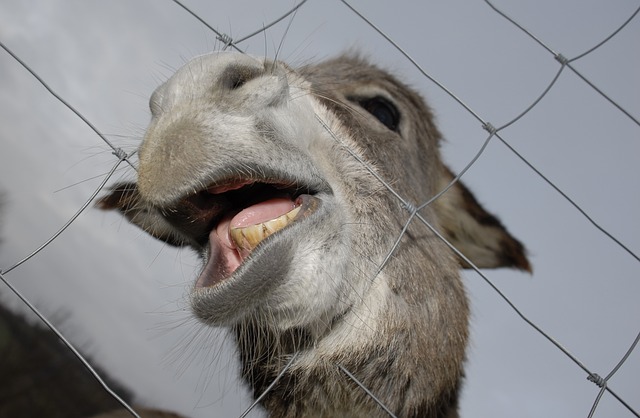 Baby donkeys are born with growing teeth that help them survive even in harsh conditions.

Donkeys had to navigate arid terrains in the past and they have features that help them do so such as growing teeth. They had to walk close to 15 km every day in arid situations.

They came across coarse and sparse grasses along with fibrous plants. These food items had an abrasive nature which meant their teeth wore away fast. Hence, they developed growing teeth to counter this.

Their teeth grow constantly as they also wear away at the same time.

How big are the baby donkeys at birth and how much do they grow later?

An average baby donkey has a birth mass of close to 25 kilograms. They are usually 60 centimeters in height as they are born. As they grow up, they may weigh up to 100 to 150 kilograms.

An average donkey usually reaches a shoulder height of 101.6 cm. Meanwhile, breeds like Sicilian donkey may grow up till 61 centimeters in height. The large ass from Majorca reaches 157.5 cm and the American ass breed may reach as high as 167.6 cm.

What are the color patterns of baby donkeys? 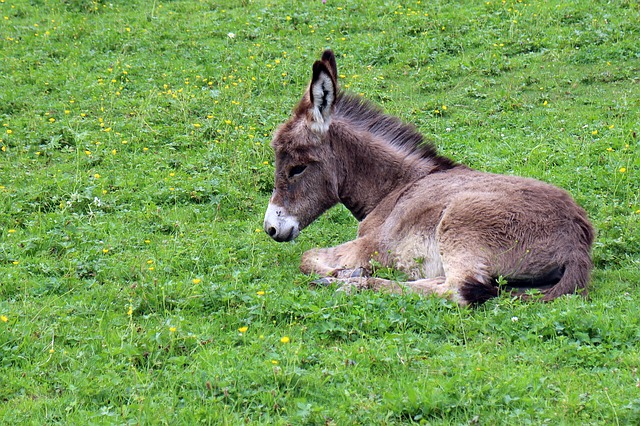 Baby donkeys are born with colors like, white, gray, or black. They also have a dark stripe stretching from mane to the tail along with a cross stripe at the shoulder. They have a short mane. Besides, their tails grow hair only towards the end, similar to cows.

What are the grazing patterns of donkeys?

Baby donkeys start eating food other than mother’s milk once they are 4-6 months old. Donkeys get most of their energy through structural carbohydrates. They need to be fed barley straw along with hay during winter and usual grazing in summer. This provides them all the necessary supplements.

In case they are working donkeys, they need grain too. They usually cover their nutritional requirement by grazing 6 to 7 hours every day. Note that this applies when the land is dryland pasture unaffected by drought.

In case donkeys have long hours of work and cannot receive pasture supplies they need hay or other dried forage in the ratio of 1:4 of legume to grasses. They also need access to fresh clean water along with salt and mineral supplements.