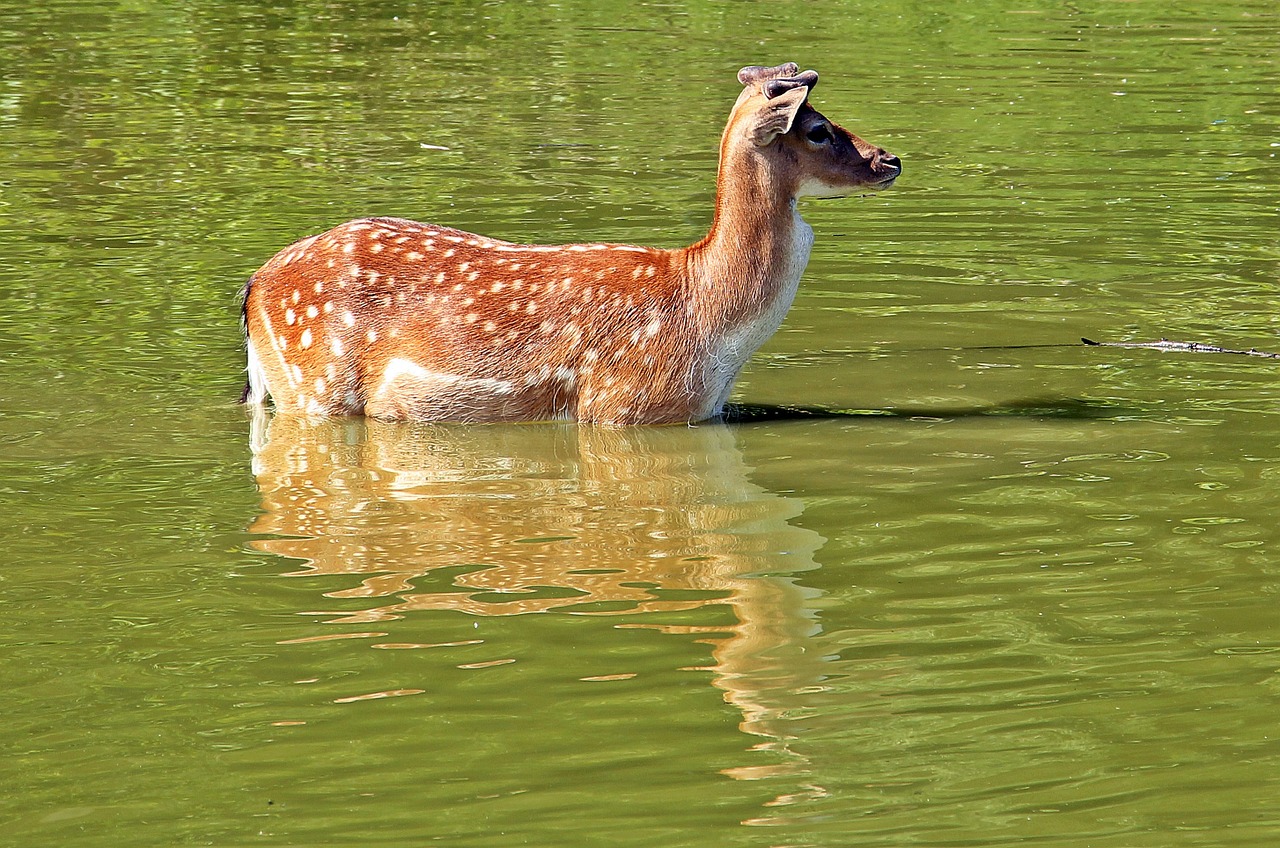 We all know that Deer is an agile animal. It can run quickly and be out of sight in seconds. Do you think deer are as good in the water as they are on land? Just like me are you curious to know if deer swim? Read on then and discover some shocking facts about deer.

Deer are very fast on land. They are equally fast in water too. Yes, Deer are exceptional swimmers. Their swimming speed is about 15mph. They are occasionally seen crossing rivers and lakes in search of food or to seek safety. Deer can even swim long distances, such as in the ocean if need be.

Deer have very strong leg muscles, toes, and hooves that assist them to be such accomplished swimmers. Without powerful leg muscles, deer wouldn’t have been such good swimmers.

Deer can swim for long distances, and this is possible only because:-

The main reason why deer can swim for long hours and distances is their coat. Without their coat, they wouldn’t have been able to swim as they can now. Deer have two coats, one is the undercoat and the other is the topcoat. The undercoat is very dense and woolly.

It provides great insulation from the heat draining effects when deer spend a long time inside the water. The topcoat, however, is hollow, long and sir-filled hairs.

As mentioned in the earlier pointer, the coat on the deer body is designed to help them float. Along with that, the hind legs of deer are immensely powerful. With that stamina and power, deer can swim up to a distance of 10 miles allowing them to cross huge lakes and rivers. They use these hind legs as an advantage to swim.

Why do Deer get inside the water and cross wide water bodies?

Deer have an extraordinary hearing power and the muscles in their ears allow independent movement according to the motion of their head. Deer have a heightened sense of smell that alerts them of the predators lurking in their vicinity. Wildlife experts and various biologists have noted that deer take to water mostly when frightened.

When frightened, they just keep on swimming in the direction they initially took. They also take to the water in search of food and shelter, which wouldn’t be accessible to its predators that can’t swim.

Many times, pregnant female deer are seen swimming to small islands to look for a place that would be safe to deliver her fawns. Deer can swim for miles without tiring out and without the fear of drowning.

Deer are always concerned about their safety and swaps to give them that safety. The swamps are the best place for deer as it allows them to bed in the thick dense growth. When a predator or a hunter approaches the swamp ground, they can be heard because of the sound that the dense marsh growth makes.

On hearing the hunters/predators, it becomes easy for the deer to run in any direction. Deer prefer swamps because here they can outdistance the intruders very swiftly in muddy cover with their bounding ability and very long legs.

Deer mainly walk on the firm ground but for normal travel routes, it uses the swamp. They very well know that they can outsmart their predators only in the muddy terrain. Deer don’t swim unless it is very necessary. They volunteer to swim to an island to escape an anticipated hunting pressure or for feed.

The water deer are deer that are small in size but in appearance are very much like musk deer. Water deer has two subspecies that are natives of Korea and China. These are:-

Korean Water Deer are found everywhere in Korea, this is because the natural predators (Korean leopards and Korean Tigers) of the water deer in that area are becoming extinct but the Chinese Water Deer is extinct in the western and the southern parts of China. In China, Water Deer are found in Anhui, Hubei, Shanghai, Fujian, and some more places.

Chinese Water Deer have now moved to the United Kingdom, the United States, and France. The Water Deer can be found alongside rivers in areas where they will remain out of sight, well protected by tall rushes and reeds.

Some of them can also be found on mountains, grasslands, swamps and even in open cultivated fields. Water Deer as the name defines well are friendly with water and are gifted swimmers.

Water Deer, just like other Deer run with jumps that are like a rabbit. Their tail is almost invisible, not more than 5 to 10 cm long. The ears are rounded at the edges and not too long. None of the sexes of Water Deer have antlers.

During winters, the summer coat is replaced by a coarse-haired, thicker coat that might be in greyish brown color or light brown. The young Water Deer are born with a dark brown coat that has white stripes and spots all along their upper torso.

Teeth are a peculiar feature in the Water Deer. They have protruding long canine teeth. These long canines are developed in the upper jaw. These teeth of the Water Deer are not present from birth. They erupt usually when the young deer is about 6 to 7 months old.

When the young Water Deer is about 2 years old, this is when these canines grow out fully. The long canines of these deer are loosely held in the gum socket and the Deer can control it with its facial muscles.

The canines are drawn backward when eating, and during encounters that are aggressive, the Water Deer displays his weapon by drawing his lower lip backward and pulling the teeth closer together. Water Deer has another name because of these canines, that name is ‘Vampire Deer’.

The behavior of Water Deer

When they see the danger, each member of the group disperses and goes their way. Female Water Deer are very aggressive immediately before and after giving birth to their young ones. It cases away females if they come anywhere close to their birth territory.

On average, a female Water Deer produces about two to three young ones. In some cases, it could even be even seven young ones. The doe gives birth to her young ones in the open but soon after their birth, they are taken to an area that has vegetation to cover them so that they are not visible to the predators.

How do Water Deer Communicate?

To communicate, Water Deer take out a variety of sounds. The main sound or a call is called a bark. It barks when it sees danger or is trying to send a message across to other Water Deer.

Can Deer swim in the ocean? Yes, Deer can swim in oceans and deep water without drowning. This is possible because of the strong legs with which it can jump fences that are as tall as 9 feet, run at a speed of about 40 miles per hour and the two-layered coat on the deer’s body which has hollow hair that provides buoyancy.

Are baby Deer good swimmers too? Baby Deer can swim but because they are inexperienced and small, they tend to get exhausted really fast.

Do Deer like swimming? Deer don’t swim for fun or as a pleasure activity. They swim only when they are looking for food, shelter or are running away from their predators.