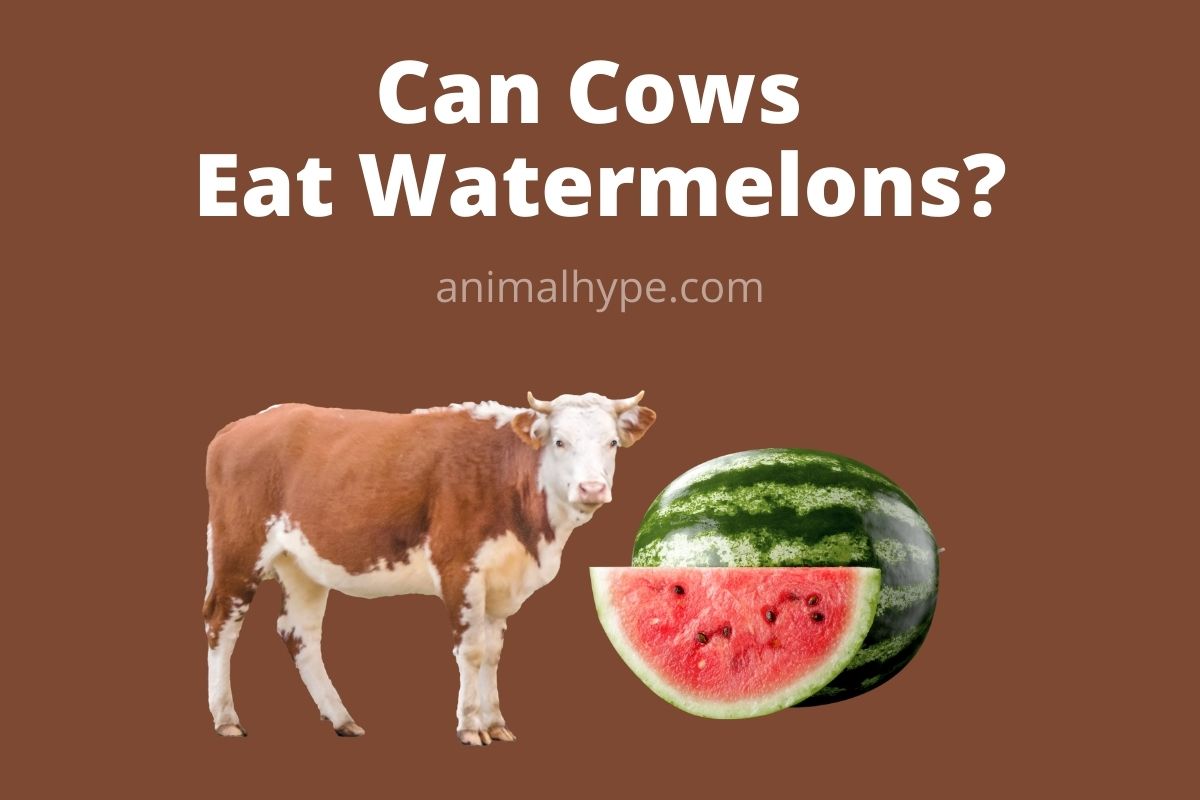 Watermelons are a delicious addition to any meal and an excellent way for families to get their daily servings of fruit. I’ve seen many people on the internet ask this question, and I wondered for a long time. I even asked my mother, and she didn’t know, so I decided to research it and find out if cows can eat watermelon.

Can cows eat watermelons? Yes, watermelons are juicy and refreshing treats for the cows that hold many nutritional benefits for them. Along with the flesh, cows can eat the rind and seeds of watermelons. However, due to their high sugar content, watermelons should only be fed to cows in moderation.

In this article, we will discuss everything you need to know about feeding watermelons to your cows. Keep reading if you want to learn more.

If you’re feeding something to your pet bovines for the first time, it is only natural to wonder whether or not will they like it. The same is true for watermelons. While your hesitation is understandable, you needn’t worry about them not liking watermelons.

If you didn’t know, all cattle, including cows, are a sucker for everything sweet. They’re fond of most fruits and will eat them gladly. This is why fruits are often used while training them.

Watermelons, being both sweet and juicy, are among their favorites. So, if your pet seems to be asking for more of these treats, don’t be surprised.

Are watermelons healthy for cows?

In the last section, we learned that cows are quite fond of watermelons, which is just one reason to feed them these fruits. But what about the impact of these fruits on their health?

As a concerned pet parent, you should try to feed your pet foods that are liked by them and healthy for them. Are watermelons one of these fruits? That’s what we are going to find out in this section.

Before we begin to talk about the health benefits of watermelons for the cows, wouldn’t you be interested in learning more about the nutritional composition of watermelons?

Well, take a look at the table given below, which contains all the information you’re looking for:

Following are the health benefits of watermelons for cows:

Watermelons contain Vitamin A in abundance

As the table indicates, watermelons are quite rich in Vitamin A, a vitamin that needs special attention for your cows. It fulfills the following functions in your cows:

The deficiency of Vitamin A can lead to night blindness in cows. Some of its early signs are dullness in their eyes, loss of appetite, and rougher hair coat.

Watermelons can provide energy to your cows.

Watermelons are rich in starch and sugar, both of which are the essence of your pet’s healthy development. Being the primary energy source for them, these nutrients promote healthy growth and productivity in your cows.

Watermelons are rich in crude protein.

You will notice that cows that eat watermelon will perform better than the ones that don’t. Lactating or pregnant cows need an even higher concentration of crude protein in their diet.

A deficiency of crude protein in your pets can lead to the following problems:

Crude Protein can also lead to a slight weight gain which shouldn’t be problematic for your pets (unless they are already overweight).

Watermelons can keep your cows hydrated.

If you go through the table carefully, you will notice that about 91% of watermelon is water. This is why these fruits are great for keeping your pets hydrated, particularly on hot, sunny days.

Is the rind of watermelon edible to cows?

While we enjoy eating watermelons, their tough rind is not edible to us, which is why we usually discard them and throw them away. But what if we told you that there’s a better way to use the rind?

If you have cows as pets, you’re in luck, for they can easily eat the watermelon rind. Unlike us, cows are ruminants with a strong digestive system capable of breaking down tough and fibrous foods like the rind of watermelons.

Moreover, watermelon rind is rich in fibers and other nutrients like Pyridoxine (Vitamin B6), Vitamin C, and Citrulline.

What about watermelon seeds? Can cows eat them?

Did you know that the main struggle of the pet owners while feeding fruits to their pets is their seeds? While some seeds contain chemicals that can harm their health, other seeds are more of a choking hazard for them.

But what about watermelon seeds? Can they pose any of these problems to your cows? No. Fortunately, the watermelon seeds contain nothing that could be toxic to your pet bovines and are far too small to present a choking threat to them. Therefore, while feeding watermelons to your pets, you needn’t remove their seeds.

What about frozen watermelon? Is it safe for cows?

But can our cows enjoy these treats as well? Yes, they can. But before you feed frozen watermelons to your pet bovines, leave them at room temperature for about 10-15 minutes.

Since we’ve already established that all parts of watermelon are safe for the consumption of your cows, preparing these fruits for them shouldn’t be difficult. However, to help you with the process, we’ve laid down some pointers that might be helpful to you:

Can watermelons be used to train cows?

If you’ve had a cow as a pet for long enough, you must have realized that these animals are highly trainable when provided with the right motivation. Because all sweet things are their biggest weakness, many cow owners use some other fruit to train them.

Can watermelons be used for this purpose as well? Yes, most certainly.

However, you must abstain from feeding them too many watermelons at once to get them acquainted with their taste. A sudden drastic change in their diet often leads to digestive and gastrointestinal problems. Introducing watermelons to them gradually would be easier for both you and your pets.

Can I feed potatoes to cows? Potatoes are rich in highly digestible starch, which makes them a healthy snack for your cows. However, you must gradually introduce potatoes to their diet to not cause any digestive problems. Also, whole potatoes can pose a choking threat to your pet bovines. Therefore, you must feed them only chopped or crushed potatoes.

Although watermelon is typically considered a tasty summer treat, many people don’t know that you can feed it to cows. Some folks claim that if given a choice, their cattle prefer it over other plants. So, there you have it. You’re all set on this topic now.

So, we’ve covered an extensive amount of information about whether or not can cows eat watermelon. Hopefully, by now, you know a lot more about this seemingly mundane topic.

Aaaaaah, that feels good! I’m sure it feels good reading too…but now we must part. I really appreciate you checking out this article in its entirety.