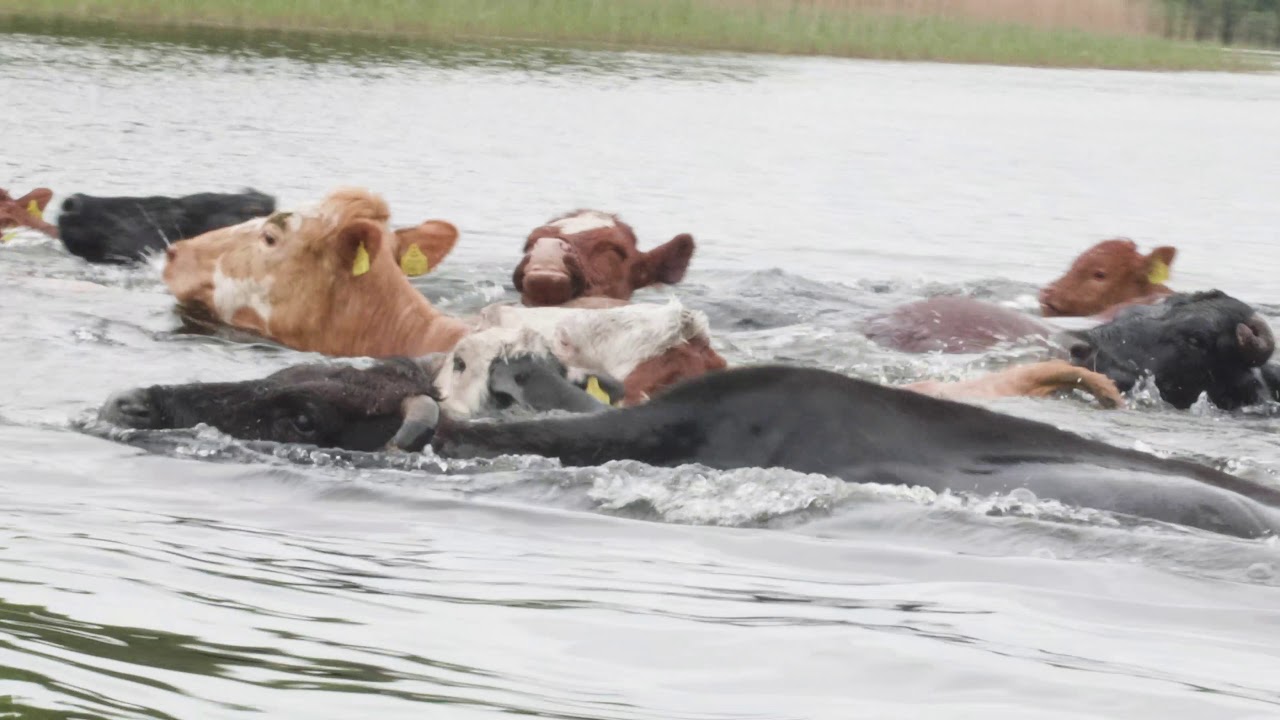 Yes, cows can swim. It’s believed that most mammals such as cows have evolved in environments including lakes and rivers. Apart from migration, swimming is also important for cows since they have to forage for pasture.

While some domesticated cattle varieties that are kept for dairy output or special muscular characteristics may not be conditioned for swimming, it’s believed that if they can comfortably walk then they can also swim.

How do Cows Swim?

Just like other mammals who are inclined to swim, cows are not only good swimmers but also untiring as well. Since cows move on their four legs, they are able to swim just in the same way. While their big bodies provide them with the floatation that they need, their big horns help to push their heads back so their mouths, nostrils and other parts of the head remains on top of the water.

Cows mostly swim with their heads above the water. According to experts, various cows normally cross lakes, streams, rivers and other water bodies every year in search of new grazing grounds.

It’s normally a huge surprise that these animals know how to swim. Besides, having enough buoyancy to stay on top of water cows will use their powerful legs to paddle. Even when they are crossing deep waters, they will ensure that their heads are kept above the ground.

Thanks to these skills, cows are known to travel long distances while swimming. Swimming not only comes naturally to them but is also a necessary skill that they need to cross the rivers and lakes.

Do Cows Love to Swim?

Although at first, the cows might have water phobia, after a while, they get used to the idea of being in water and swimming. They will fight the waves as they move about and even splash back into the water with a lot of ease. While they may get drawn when they are tired, they can swim for several miles without getting tired.

When watching the cows in water, you’ll always be relieved to see even calves with their heads above the water swimming very fast.

Since cows are good swimmers, it’s not uncommon to see them swimming in floodwaters, especially after a heavy downpour. While cows can swim for several miles if they get tired along the way they can drown. Nowadays most farmers tend to swim their cattle over lakes and rivers to search for better grazing lands.

There are even a particular species of cows that spend a lot of time in water hence has a set of bighorns that it uses to tip its head backward to prevent its nose from getting inside water.

While most people think that humans have the same survival tactics as animals, this is not true. When humans are still young, they are not even allowed to move near any water body. Since they are taught to avoid any water body, they tend to develop water phobia. This is further reinforced every time they tell themselves that they can’t swim.

This is contrary to the cows as swimming comes automatically to them. This is because they can comfortably use all their limbs to swim while maintaining a roughly upright position with their head naturally staying about water.

This posture allows them to keep on breathing by using special maneuvers. Since the way cows swim is a modified version of the way they run, it comes naturally. Unlike cows, humans are bipedal hence do not use their arms for locomotion. This means none of the swimming movements that they need to do has a land equivalent.

Although it’s possible for humans to swim with only their legs, this also requires a lot of practice and training for them to be perfect. This is because swimming with their legs is not their natural running motion.

Additionally, their swimming forms ensure that their bodies are parallel to the water surface so as to minimize any drag that might be there. The way the human head is connected to the body also makes sure the face is down in water; hence they must train on special maneuvers.

Further, as compared to cows, humans stay indoors. This is contrary to the cows that spend a lot of their time outdoors hence are familiar to the water bodies.

Although it used to be a common practice for farmers to swim their cows over the lakes and rivers in search of greener pastures, it’s not nearly as common as it used to be nowadays.

Water crossings can be one of the most deadly things. One, therefore, needs to learn how to swim the cows across the water body or river.

Here are some tips to help you swim your cows across water bodies safely:

Getting cows across the streams, rivers or lakes can be a pretty big job, especially if you do not know how to do it. Once the cows balk at crossing rivers, getting them into the water again can be difficult.

However, if the lead steer gets into the water, others will automatically follow. Generally, they will also go after a rider who goes ahead of them to lead them across.

In case they can’t follow the leader, you need to cut off a small herd and hold them together. Next, you need to charge the small herd into the water without giving them any time to turn back. As soon as they’ve started to cross, you should shove in another bunch so they can follow the ones that are already in the water.

The good thing is that in case they are thirsty and dry, getting them inside the water is very easy.

You also need to hold the leaders on the opposite side so you can use them as bait to attract the others. You may use this method to force the cattle across in small bunches.

Benefits That Cows May Enjoy from Swimming

Just like other mammals, swimming is perhaps one of the best forms of exercise for cows. It is good for the overall health of the cows by providing them with aerobic workouts that also tone their muscles.

Since swimming is a low impact form of exercise, it can be used as a therapy for cows that are recovering from an injury, are older, or have joint issues.

Here are five reasons why cows need to swim once in a while.

Just like humans, swimming is one of the best forms of exercise for your cows.

Did you know that a few minutes of swimming is equivalent to four minutes of jogging or running?

It provides them with several health benefits such as boosting their metabolism, decreasing inflammation, strengthening their heart and lungs and improving their blood circulation.

More so, moving their limbs against the resistance of waves helps strengthen a particular muscle group in the body. All these will add up to a healthy and strong cow that will move and feed for long with less injury.

Since swimming is non-concussive, low impact and non-weight bearing, it will ensure that your cow enjoys all the benefits without putting a lot of pressure on their tendons and joints.

When swimming in the water, the water takes up all the weight of the cow while supporting their bodies and relieving their skeletal system from any stress that they may be having.

Further, swimming gets the cows to move in a different direction than they would normally do while walking, thus boosting their range of motion. All these make swimming a good exercise for cows suffering from joint issues.

Swimming is not only great for a cow’s physical health but also improves their mental and emotional well being. Just like other animals, cows need mental stimulation in the form of fun and play to help them remain happy and stay sharp.

Swimming allows them to get out all their pent up energy without feeling any form of restraint. Swimming will, therefore, provide them with the kind of relaxation needed.

Swimming Can Help Them Relieve Pain

Swimming can also be an excellent therapeutic exercise for the cows. Not only is the water pain-relieving, but it also boosts their blood flow and reduces the risk of further injury that may occur to them.

Saltwater Swimming Can Provide Good Treatment for Their Skins

Swimming regularly in salty water can also help the cows retain their skin moisture and detoxify it so they can promote new cell growth to their skin. You’ll be surprised how smooth and healthy a cow’s skin is after swimming regularly for some time.

In a nutshell, it’s a true fact that cows not only swim but also love to swim.

Just like other mammals, cows are natural swimmers. Other than providing them with a chance to look for new pastures, swimming also improves their physical and mental well being as well.