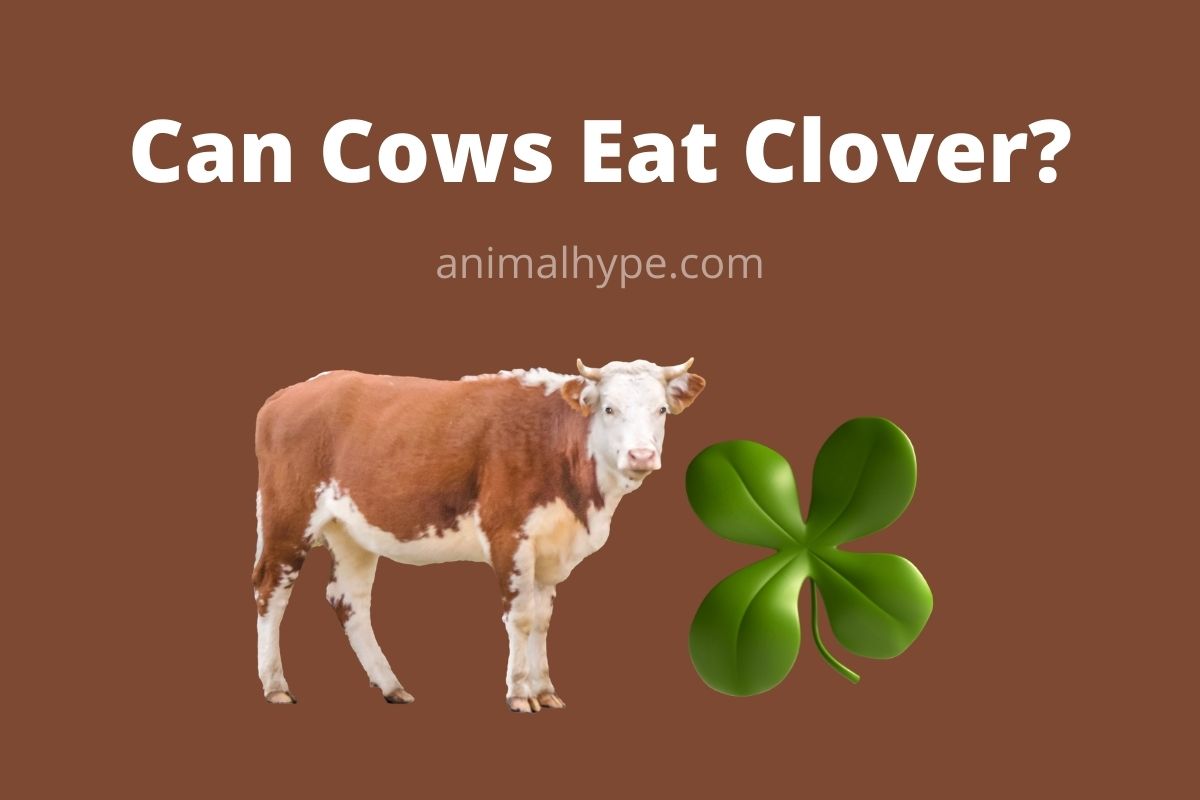 If you’re like me, you’re wondering if cows can eat clover. Maybe you have a friend that owns a farm who would like to know the answer. They might be seeking an alternative food source for their cows because they are currently using grass and want to find something different, or they might be thinking about switching from grass to clover as a food source.  Whatever the case may be, the following is going to help answer the question.

Can cows eat clover? Yes, clover is an excellent food for cows. Clover is a type of legume rich in protein and calcium, both beneficial for your cow’s health. Out of all the clover varieties fed to cows, the Berseem Clover is by far the most beneficial.

Clover not only tastes great but keeps your cows happy and healthy too! But never give moldy or damaged clover to cows as it can lead to several health problems like bloating, poisoning, and photosensitization.

Clover is a cool season, leguminous forage crop. It’s palatable, nutritious, and beneficial for cows. Clover benefits cow digestion and adds nutritional value to cow feed. Clover is a good supplemental feed to use for cattle and other livestock because it helps gain bigger meatier muscles and develop faster muscle growth. A healthy cow will produce higher quantities of tastier milk.

The family of clover plants is quite diverse, accommodating over 300 different flowering plants. These trifoliate plants are commonly used as a forage for many livestock animals such as swine, sheep, horses, and cattle. Another important purpose served by these plants is soil building. In this article, we will talk about feeding clover to cows.

Also referred to as “Ladino” or “Dutch clover,” the white clover (Trifolium repens) is among the most widely cultivated clover plants that are endemic to Central Asia and Europe.

Although this clover is one of the most important forage legumes, it is usually grown in a mixture of forage grasses (most often perennial ryegrass).

Do you wonder why that is? Because when consumed alone in abundance, white clover is likely to cause pasture bloat in the cattle, particularly cows.

For those of you who haven’t heard of the term before, pasture bloat is a common digestive disorder common among the cattle in which their rumen gets filled with gas.

Although gas production is a natural part of their digestive process, the cows usually release this gas by belching. The problem occurs when the passage used for gas release is obstructed.

There are two kinds of bloating in cows: frothy and gassy bloat. And the kind that usually occurs in cows when more than 50% of their diet consists of legumes is the frothy kind.

The high legume content in their diet leads to the formation of foam that ends up blocking their rumen, making the release of gas difficult for them. Some of the common symptoms of pasture bloating in cows are pain, discomfort, and a swollen left abdomen.

While bloating might not sound like a serious problem to many of you, pasture bloating in cows is a high-risk disease that should be attended to immediately. Otherwise, their distended rumen can put pressure on their diaphragm, ultimately killing them from shock or asphyxia.

If you have diagnosed pasture bloating in your cow, get the help of a veterinarian right away. Passing a stomach tube into their rumen might help in releasing gas from it. Alternatively, you can also give a small dosage of Polaxolene or Dimethicone to reduce the bloating.

Although grouse and other game birds mostly consume its seeds, sweet clover can also be used as livestock feed once cured properly. However, its bitter taste might not appeal to your cattle right away; they will need some getting used to when eating sweet clover.

Sweet clovers are harmless for your cows when fresh, but if they’re eating spoilt or damaged sweet clovers, there could be trouble.

The risk of Sweet Clover Poisoning

Sweet clover contains coumarin, a bitter-tasting chemical compound used as a defense mechanism to keep pests away from the plant. While coumarin itself is non-toxic for cows, when molds attack the plant, it transforms into dicoumarol, an anticoagulant drug known to deplete Vitamin K’s storage.

When cows feed on moldy sweet clover, dicoumarol enters their bodies and destroys the Vitamin K stored in their bodies. And since Vitamin K is vital in blood coagulation, its deficiency leads to hemorrhages in them, resulting in severe blood loss even from minor cuts. This condition is referred to as sweet clover poisoning.

The impact of sweet clover poisoning on your cows varies in accordance with their diet, health, and age. If your cow is eating moldy sweet clover in small amounts, it might take months for them to show any symptoms. However, if they’re consuming large amounts, the symptoms will be evident within 3-4 weeks.

Following are the common symptoms of this disease:

Young cows and calves are more vulnerable to sweet clover poisoning than mature ones. Therefore, if you have these little babies as pets, you will have to be extra careful about the sweet clover you’re feeding them.

Found in northwest Africa, Europe, and Western Asia, the red clover (Trifolium pratense) is a short-lived flowering plant that is widely grown both as a fodder crop and to increase soil fertility.

This clover is healthy for the cows and has a moderate possibility of causing bloating in them. However, there is another reason why you should not feed it to them.

The threat of Isoflavones

Red clover contains isoflavones, anti-oxidants that tend to bind with the estrogen receptors in the bodies of cows when they ingest it. This binding process leads to either weak or anti-estrogenic activity in them, affecting their breeding performance negatively.

Therefore, we recommend that you not feed too much of this clover to your pets if you want them to breed properly.

Also referred to as “Italian clover,” the crimson clover (Trifolium incarnatum) is a flowering plant of the legume family endemic to Europe. One of the most important uses of these plants is in agriculture, as a nitrogen-fixing cover crop.

It is also used as a forage crop for cattle and other livestock animals like horses. However, because the fibers of these plants are not as easily digestible as the other clover varieties, it might lead to bloating in your pets.

As livestock fodder, this clover plant has a shallow bloating risk and is safe for your healthy pet to eat. However, if your pet has any kind of liver disease, eating alsike clover can result in Photosensitization in them.

Some of the common photosensitization symptoms you should look out for in your pets are:

If you notice any of these symptoms in your pets, you must stop feeding them any kind of clover right away.

Also, avoid bringing them into direct sunlight and keep them in a cool, sheltered place instead. Apply a mild antiseptic solution to the areas where their skin has developed lesions.

How much milk can a cow give in a day? The cows can produce about 6-7 gallons of milk each day on average. They can be milked 2-3 times a day.

Apart from clover, which other legumes can be fed to the cows? Alfalfa, bird-foot trefoil, cicer milk-vetch, and sainfoin are all legumes that your cows can eat in addition to clovers.

What do calves eat? When the calves are born, they should be fed either colostrum or their mother’s milk within the first 24 hours to provide them with all the antibodies, nutrients, and minerals they need. After that, they feed on their mother for the next 2-3 months. Once they are 3 months old, they can be weaned off milk and eating hay and grains.

Everyone who has ever gardened knows those questions you ask yourself because you don’t really need to know the answer, but you’re curious anyway.

Its nutritional value makes it a valuable addition to a cow’s diet. You can buy clover specifically labeled for cows at the local agricultural supply store, or plant it yourself in your pastures.

We’ve come a long way, and from the end of our article, you should have more knowledge about the topic of cows eating clover. Your family will be impressed when you talk about this topic!

So share this article with them, let them know about what you learned, and discuss it at dinner tonight!