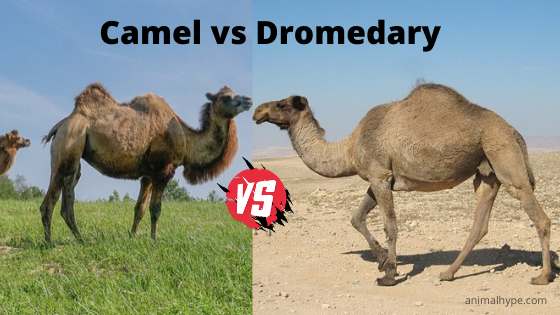 I bet most of you might have never heard of Dromedaries before. And then out of the blue, you hear that there are these camels knows as the dromedary camels. For most of us, the image that conjures up when we hear the word camels are the giant animals with a big lump walking through the vast desert.

So what are camels and dromedaries? Are they different from one another, or are they the same?

Camels are mammals with long legs, a slender snout, and a distinguishable hump on their back. There are two types of camels viz; The Dromedary camels and The Bactrian camels. It Is important to note that what we generally call as a camel is the Dromedary camel.

Apart from the differences in the number of humps, there are other notable differences too. For instance, the length and thickness of their fur differ. Though both the Bactrians and Dromedaries belong to the family of camels, the geographical regions they live in differs. Owing to which their adaptations differ.

In this article, we will have an in-depth look at the differences between a Bactrian camel and dromedary and also try to understand why these differences happened. 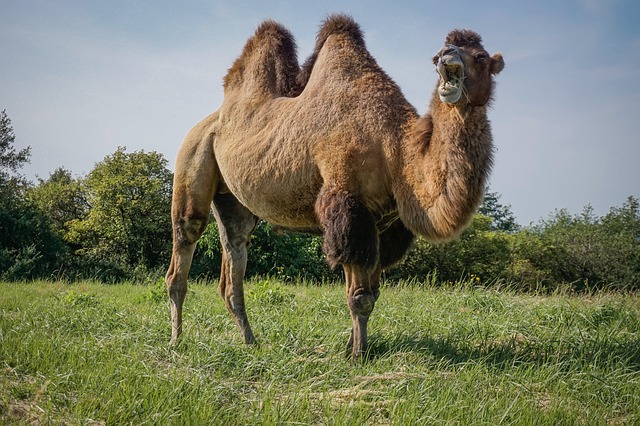 As said earlier, Bactrian camels are the species of camels known for their two large humps. These camels are the largest among the family of camels and can grow up to 8ft tall and 11ft long while weighing a staggering 2000 pounds.

Bactrian camels are endemic to the steppes of Central Asia, and they have had an essential role in the history of the region. There are pieces of evidence to prove that the Bactrian camels were domesticated and were commonly used as pack animals since ancient times.

Unlike the camels that you see in the Arabian deserts, Bactrian camels are very different from them.

The climate in the steppes of Central Asia can be quite unforgiving. During summer, the temperature can easily cross 100 °F, while during winter, it can drop down to -20 °F.

Due to this, Bactrian camels have some unique adaptations compared to the dromedary camels.

For instance, compared to the dromedary camels, the Bactrians have a long thick coat of fur that provides enough insulation during winters. It is interesting to note that the thick hair of the Bactrian camels falls easily during summer to cope with the extreme heat.

Similar to other camels, Bactrian camels store fat in their two humps. It is this stored fat they break down into water and energy during their long trips. It is the same adaptation that helps the Bactrian camels survive long icy winters without water.

Due to the adaptation mentioned above, Bactrian camels were primarily used as pack animals in ancient times. And these camels were also the primary goods carrier on the old silk road. 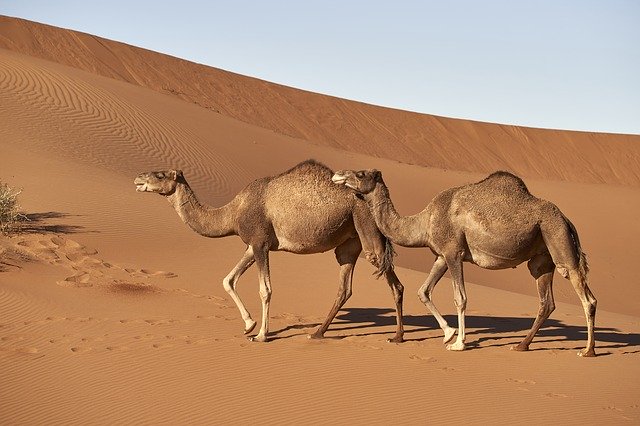 Dromedary or the legendary Arabian camels are the one-humped camels that are commonly found in Northern Africa and deserts of South West Asia.

These one-humped camels are indeed the lifeline of the hot, unforgiving deserts. The Dromedary camels can be almost 7ft tall and weigh more than 1600 pounds.

Clues are pointing out that the Dromedary camels were first domesticated around 3500 years back and has since remained a valuable pack animal.

It is rather interesting to note that the Dromedary camels were once considered to be an indication of how wealthy a person was. Many Arabian cultures judged a person’s wealth based on the number of camels he/she owned.

Owing to the unique geographical conditions the Dromedary camels live in, they have different features than Bactrian camels.

Unlike the Bactrian camels, the Dromedary camels don’t have to face extreme winters, and hence they don’t have thick and long fur. Instead, they have small and loosely packed fur. They also have large, tough lips that enable them to forage and eat from thorny landscapes.

Like the Bactrian camels, the Dromedary camels also have thick & long eyelids to protect their eyes during a sandstorm. They also have a special membrane to close their nostrils to keep the sand away.

The Dromedary camels also have thick and flat footpads that help them easily navigate through the desert sand and dunes.

A striking adaptation that is unique to the Dromedary camels is that their body can tolerate losing more than 30% of its total water content. It is this ability that helps them survive in the unforgiving landscapes. A thirsty Dromedary camel can drink almost 100L water in less than 10 minutes.

As said earlier, the Dromedary camels have only one hump, but that doesn’t make them any less efficient. Dromedary camels can store up to 80% of their body fat in their hump. It is this stored fat that fuels them on long journeys through the unforgiving deserts. This stored fat breaks down into energy and water to keep them running.

Dromedary camels are not considered to be wild animals anymore. It is estimated that there hasn’t been a significant population of Dromedary camels for the last 2000 years.

Differences Between a Dromedary and Bactrian Camel

The primary difference between a Dromedary and Bactrian camel lies in the number of humps. The former has one hump while that latter has two.

This difference in the number of humps doesn’t mean that one of them is efficient than the other. In fact, biologists are yet to identify the exact reason as to why the Bactrian camels have two humps while the Dromedary camels have only one.

It is important to note that both the camels are born without humps at the time of their birth. The hump that we see is, in fact, a storage facility for fat.

Another difference lies in the type and thickness of their fur. Owing to the harsh winters and extreme summers in the region where the Bactrian camels live in, they have thick and long furs to give them enough insulation.

These fur sheds away when nearing summer and small furs take its place. This isn’t the case with the Dromedary camels that are found only in hot deserts. The have thin fur.

How Long Can Camels Go Without Water?

Are There Any Wild Camels in the United States?