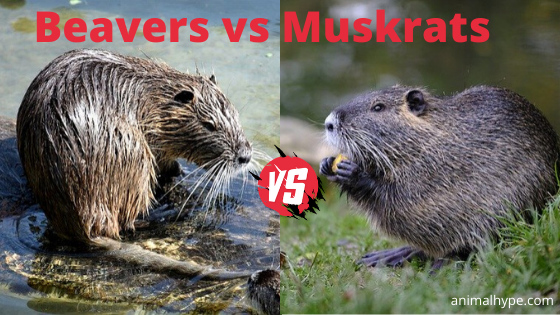 Beavers and muskrats are amphibious rodents that are commonly found in North America, Europe & Asia. Being rodents, they are closely related to rats, mice, and hamsters that we often see around us. Though beavers and muskrats look similar, they aren’t the same.

If you have ever seen a beaver or a muskrat, you might know that they look similar to their rodent relatives. It is also interesting to note that muskrats and baby beavers look so similar that most people can’t identify them accurately.  In this article, we’ll take a look at differences between Beavers and Muskrats.

So, what are the differences between beavers and muskrats? The two notable differences between beavers and muskrats lie in the shape of their tail and their size. Beavers have a short and flat tail that resembles a paddle whereas a muskrat has a long tail similar to that of rodents. Also, adult beavers are bigger than adult muskrats. An adult beaver can weigh about 27kg while an adult muskrat would weigh only 2kg at the most.

Differences between beavers and muskrats

Though beavers and muskrats are both amphibious rodents, they are not the same. Baby beavers indeed look similar to muskrats, but that is just the similarity in appearance. Here, we will look into the similarities and differences between a beaver and muskrat.

Beavers are considerably larger and heavier than the muskrats. There are two different families of beavers viz The American beaver and the Eurasian Beavers.

The former weighs around 27kg, and the latter weighs around 30kg when they are adults. Whereas, fully grown muskrats would weigh only 3kg and would have the same size as that of giant rats.

Incisors are the pair of a narrow-edged tooth at the front of the mouth. Beavers are animals that are known for their large and sharp incisors. The incisors can measure around 25cms in length. These incisors are so sharp and strong that they can cut down a large tree within an hour at the most.

Interestingly, their incisors have a high concentration of iron in them and, hence, has a dark orange color. Also, these teeth keep growing throughout their lifetime and sharpen on their own.

Unlike beavers, muskrats do not have such highly capable incisors that can cut down large trees or branches. But yeah, they do have teeth that help them while foraging.

It is important to note that both the beavers and muskrats have top and bottom incisors that overlap each other. Owing to this overlap, they can self-sharpen their incisors. They also have a fold of skin behind the incisors that helps them while foraging underwater.

The shape and structure of the tail differ significantly between a beaver and a muskrat. Beavers have a large and flat tail that is covered in scales.

They are excellent swimmers, and they use their tail as a rudder while they swim. They also use the tail as a prop while sitting or standing on land.

Apart from being of help in swimming, beavers use their tail to store fat in winter.

Unlike beavers, muskrats have an elongated tail similar to that of the common rodents that we see around us. The tail of a muskrat can be around 20 to 25cm long and is covered in scales.

Their tail is flattened vertically, and it helps them propel fast in the water. While on the land, the muskrats drag their tail around, making it easier to identify their track.

Beavers and muskrats are amphibious rodents and they need water for their survival. Due to which they are most commonly found to live in and around freshwater ponds, lakes, rivers, marshes, and swamps.

Both the beavers and muskrats tend to live in groups. Though they both live in the same conditions, the place where they stay differs.

Beavers stay in dome-shaped houses that are made out of woven sticks, grass, and plastered with mud. A beaver’s house is called a lodge and it is built inside dams that are built across waterbodies. Unlike beavers, muskrats live in burrows called lodges that are built near the water.

Both a beaver’s and muskrat’s lodges are well connected to their feeding grounds and outside land by tunnels. These lodges can be 8 feet wide and up to 3 feet high.

Do muskrats and beavers build dams?

Only beavers are capable of building dams, and muskrats are not. Among the two, beavers are the workaholics who spend most of the day building dams or repairing them. Beavers are always on the lookout for any leaks in the dam. If they find any, they will seal the leak at the earliest.

The most prominent reason as to why muskrats aren’t capable of building dams is because they lack sharp incisors like beavers.

As said earlier, beavers have a high concentration of iron in their incisors, which gives them adequate strength to chop down trees and trunks to build dams. Whereas, the muskrats are not capable of doing this.

Can beavers and muskrats swim?

They both have flattened tails, which they use as rudders to change direction while swimming quickly. Apart from the flattened tails, they also have large webbed hind feet that make it easier for them to swim.

It can be said that beavers and muskrats do good in water than inland. Their adaptation to being in the water is not just limited to a flattened tail and webbed hind limbs.

Their eyes are equipped with a specialized membrane that gives adequate protection to their eyes while underwater, which helps them see clearly. They are also capable of closing their nostrils while swimming to keep the water out of their airway.

Among all these adaptions, the most interesting is the layer of tissue behind their incisors that let them open their mouth while underwater. It is because of this membrane; they are capable of using their incisors underwater without gulping water.

Did you know that sometimes muskrats stay in the beavers’ lodge?

If you didn’t know, muskrats are territorial rodents who mark their territories using the musk gland beneath their tail.

But in a recent video that was shot from inside a beavers’ lodge, it was found that some muskrats stay inside the beavers’ lodge.

This behavior can especially be seen during winter when food is scarce. Muskrats can be seen munching on the tree barks that were stored by the beavers for winter.

It was also observed that muskrats go out foraging in the winter and come back with fresh vegetation for the beavers too!

Quite magnificent, isn’t it?

Diet of beavers and muskrats

Beavers are herbivorous rodents who mainly feed on leaves, bark, twigs, roots, and aquatic plants. It is interesting to note that beavers don’t hibernate even during extreme winters.

They have an interesting adaptation to survive the harsh winters. Before the temperature starts plunging, beavers chop down trees and carry the branches to the dam they have built. They store these branches such that they don’t lose the freshness until summer.

Mating and reproduction in beavers and muskrats

Another difference between beavers and muskrats lies in their reproduction. Beavers mate once a year and produce only one litter. Whereas, muskrats produce up to four litters in a year.

Beavers live in groups made of mated pairs and their offspring. There can be as many 12 beavers in a single lodge. Beavers aren’t territorial and live peacefully with the others in the group and show no aggression towards the other beavers.

This isn’t the case with muskrats who live in groups made of mated pairs and their offspring. Muskrats are territorial and they can even get quite aggressive towards the other muskrats in the lodge.

Do Trees Cut by Beavers Always Fall Toward the Water?

How Does the Beaver Use Its Tail?