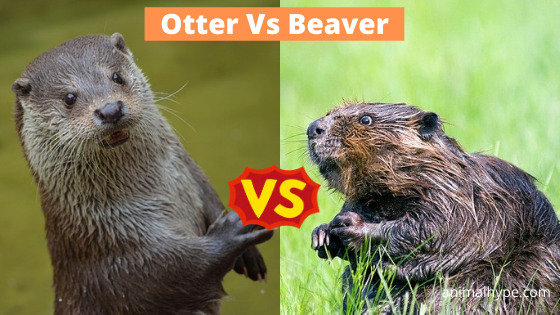 Have you ever been confused between an Otter and a Beaver before? Both Otters and Beavers share similar habitats and can often look similar at the first glance, which is why most people wrongly identify one for the other. However, in reality, Otters and Beavers are two very different animals belonging to different orders.

If you want to learn how to distinguish between an Otter and a Beaver, you’re at the right place. In this article, we will tell you about the differences between these two animals on grounds of their diet, appearance, reproductive cycle, and so on.

So, what are the differences between otters and beavers? Other than their similar habitats, Otters and Beavers have no similarities whatsoever. While Otters are large, carnivorous mammals, Beavers are semi-aquatic rodents who strictly follow a vegetarian lifestyle. Otters have a long, slim, and glossy body like that of seals, whereas Beavers have a rounded body like other rodents. Beavers weigh about twice as much as Otters, and live twice as long, too. The tails of these two animals are very different from each other. Otters have a long and pointed tail, while the tail of a Beaver is flat, broad, and oval-shaped.

Both Otters and Beavers have a specific mating season, but while Beavers are monogamous and reproduce with their partners, Otters look for a new partner every season. Otter’s offspring is called pup and is born without being fully-matured, while Kit, the Beaver’s younger one, is fully-matured when it is born.

Differences between Otter and Beaver

Otters are the carnivorous mammals that belong to the family of Mustelidae, a family in which animals like minks, wolverine, badgers, and weasels also reside. If you take a closer look at their family, you will find that all the different species of Otters are together grouped in the subfamily of Lutrinae.

There were far too many Otters in the past than those that have survived. Today, you can find about thirteen species of otters in the world, with the rest of their siblings extirpated.

Beavers are large, herbivorous rodents. Native to North America, they are the second-largest rodents in the world after the Capybara of South America. These rodents are popular worldwide for building dams, canals, and lodges.

Beavers belong to the genus of Castor, which consists of a total number of three species. While two of them are extant (North American and Eurasian beaver), the remaining one (Castor Californicus) has been extirpated.

It is true that both Otters and Beavers live in similar habitats. However, that’s where all the similarities between the two end. Take a look at the table given below to notice the differences between their lineage and other physical characteristics.

Now, let’s take a closer look at the differences between Otters and Beavers on various grounds.

How were Otters and Beavers named?

The name “otter” is derived from the Old English terms “otor” or “oter”. These terms find their root in the Proto-Indo-European language term “wodr”, a word that is also believed to have given birth to what we call “water” today.

Since all the living species of Otters are either semiaquatic or aquatic, the name seems fitting for them.
The name “beaver” can trace its root back to the Old English terms “befer” or “beofor”.

The Old English terms find their way back to the Proto-Indo-European language term “bhebhrus”, which means “brown” or “bright”. Since Beavers have brown skin, their names are quite justified.

If you look at Otters, you’re bound to find them extremely cute. At first glance, these mammals look somewhat similar to seals.

Their face is small, with black eyes set on the sides of it, with thin whiskers all over their face. Their ears are basically holes with little upper skin.

A beaver’s face, on the other hand, very much like the other rodents. They have small, black eyes, and the hair around their nose is lighter in shade than the rest of their body.

Their ears are more prominent than the Otters, round and black, placed at the side of their eyes.

The Otters have two sharp teeth protruding from their lower jaw with a considerable gap between them. In contrast with the Otter’s teeth, Beavers have two almost conjoined front teeth that in their upper jaw that are orangish in color.

Beavers use these teeth to cut through wood. To swim comfortably, Beavers have see-through eyelids and closed nostrils as well as ears.

Otters have a long, slim body with limbs that are quite short in comparison. Otters are covered from head to toe with a brown, glossy fur. All four feet of the Otter are webbed to help them swim.

The body of a Beaver is rounded like the other rodents and has a thick, brown fur all over it. When compared with a Beaver, an Otter looks almost hairless.

Only the hind limbs of a Beaver are webbed, while the forelimbs are shaped like claws. When on the ground, you will mostly find these rodents standing on their hand limbs.

In terms of body weight as well, Otters are much lighter than the Beavers. The average weight of a Beaver is about 22 kgs, while Otters usually weigh between 7-11 kgs.

The Sea Otters, which are the heaviest Otter species in the world, weigh somewhere around 20 kgs, which is the closest Otters have ever come to Beavers in weight.

A striking feature of their body is their long, pointed tail, which is about 30-50 cm long on average. All the Otter species, except the Sea Otter, have a tail that is long and muscular to help them in swimming. The tail of Beavers, on the other hand, is broad, flat, oval-shaped, and covered with black scales.

While Otters are carnivorous mammals, the Beavers are herbivores and follow a strictly vegetarian diet throughout their life.

Otters spend most of their lives in the water. Therefore, fish is their staple food. They also use crayfish, crabs, and frogs as a supplement in their diet.

Otters can also eat small mammals or birds if they are easily available in their surroundings. Some species of Otters can open shellfish and feed on them.

The Sea Otters are also known to hunt clams, sea urchins, abalones, mussels, and other shelled creatures such as snails. Since Otters are dependent on their prey for food, a depletion in the aquatic life is a serious threat to their survival.

Beavers, on the other hand, have access to an abundance of vegetation. They can eat the leaves, fruits, foliage, twigs, and even barks of trees and aquatic plants. These rodents enjoy eating the inner bark of trees in particular.

In the winter season, the barks of trees make up about half of their diets. However, in summers, when there is an abundance of plants to feed on, only 10% of their diet include barks. Beavers also like to chew on the soft cambium present beneath the tough upper layer of the bark.

In addition to barks, Beavers like to feed on the foliage of red maple, willow, and aspen trees. Other plants Beavers are fond of are pondweeds, rhizomes, water lilies, ferns, grass, leaves, bulrush, cattails, etc.

All the breeds of Otters in the world are aquatic, semi-aquatic, or marine. What do you think does it mean about their habitat? It means that water is the central habitat of all Otter species.

Out of the 13 extant Otter species that we can find today, 11 are freshwater otters, while the remaining 2 are saltwater otters. The freshwater or river otters are found in abundance throughout North and South America, Africa, Europe, and Asia.

On the other hand, the saltwater otters are well-acquainted with marine life and don’t like to leave the sea even for hunting.

One of these otters is the Sea Otter, which is found in the Pacific Coast of North America. The other, much smaller otter breed is the Marine Otter, whose population lives on the coasts of Peru and Chile.

Otters have a specific mating season, which varies by the species as well as the location of their habitat. Both the male and the female Otters mature sexually when they are about 2-3 years of age.

If the availability of food and shelter is adequate, they can mate more than once as well. The males and females usually live in different circles, but with the onset of the mating season, the former approach the latter. The female

Otters show their consent to mating by rolling around with the males. While the courting takes place on land, Otters return to the water to mate.

Once they have mated, the gestation period can last between 2-9 months, after which a pup is born. Female Otters can give birth to up to 6 pups at a time, but a single pup is most commonly born to them.

The Beavers, on the other hand, practice monogamy strictly. A Beaver doesn’t look for another partner until its partner is dead. Beavers reach sexual maturity at the age of three years.

Their breeding season commences in January and lasts until February. The gestation period extends up to 120 days, after which the female Beaves can give birth to 3-4 kits at a time.

An Otter pup is blind at the time of its birth and remains so for about a month. They are usually born on a kelp bed in the water or a den and stay there until they can see. In case the birth takes place on land, the mother Otter moves it into the den.

Once they are a month old, mother Otter takes them out to teach them how to swim. Mother Otters act as a dedicated caregiver for their offspring. While they can mate right after their young ones are born, they choose to wait a year to nurse them.

However, if the female’s pup dies, she looks to get pregnant again quickly to have another offspring. For the first 12 months, mother otters nurse its young ones. In some species, weaning takes only 8 months.

The younger Beavers are called kits. Unlike the Otter pups, the kits are born fully matured, with their eyes open and functioning, and their bodies are covered in thick fur.

It takes the kits a day to get used to water and learn swimming. In about 2 weeks, they are fully weaned. However, the kits still stay with their parents until they are 2 years old, after which they lead their independent lives.

If you look at Otters and Beavers closely, you will find that the two are indeed very different animals in every aspect. While Otters are mammals, Beavers belong to the family of rodents.

Otters are carnivorous, whereas Beavers strictly adhere to a vegetarian lifestyle. Otters are polygamous, while Beavers follow monogamy.

Both the male and female Otters part ways right after the mating season, whereas Beavers raise their kits together as a couple. All in all, the two have little similarities.