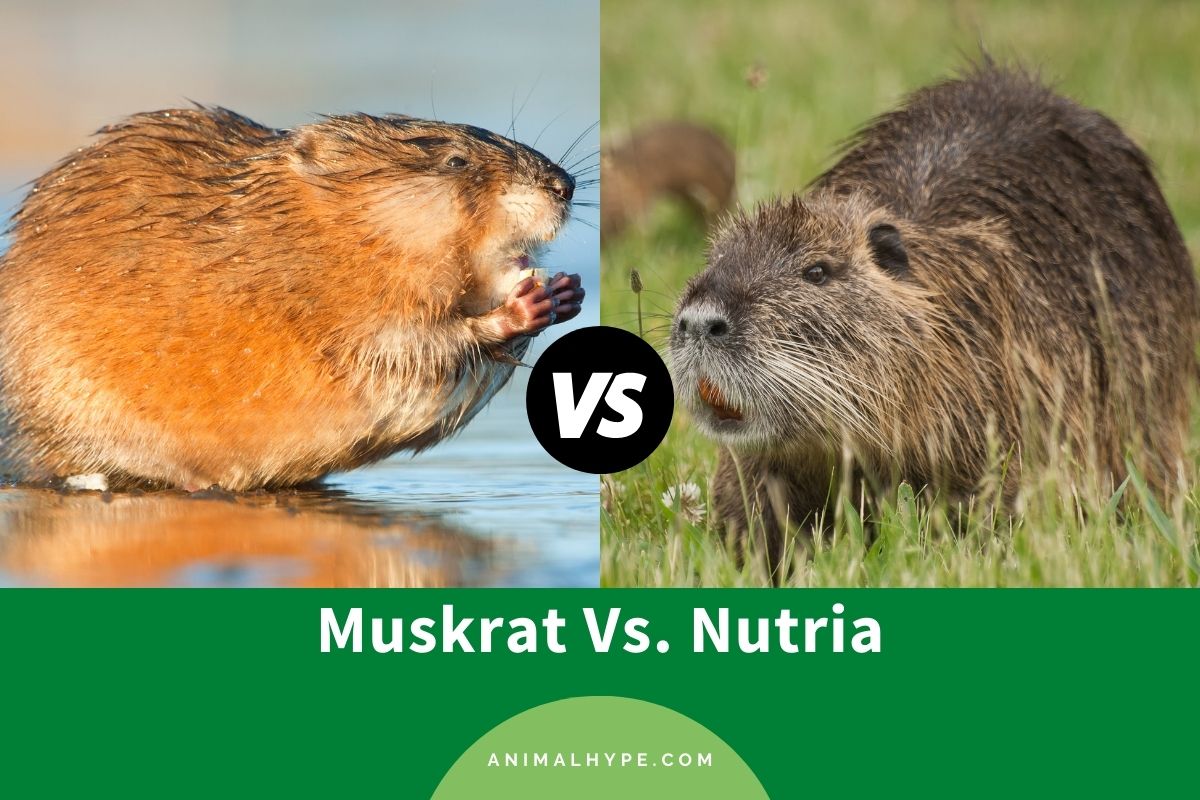 If you see a Muskrat or a Nutria somewhere around your house or in your neighborhood, you should be worried. Both Muskrat and Nutria are semi-aquatic rodents that pose a great threat to your property. But can you really distinguish between the two? Both of them look quite similar and can often be confused for the other.

If you ever come across one such animal, how would you identify if it is a Muskrat or a Nutria? Read on to find out everything you need to know in order to differentiate between Muskrat and Nutria.

So, what is the difference between muskrat and nutria? While both Muskrat and Nutria are both semi-aquatic rodents, there are many differences between the two. The weight of Muskrat is half as much as that of the Nutria. Muskrat’s fur is short, double-coated, and dense to help them survive in a colder climate. Whereas Nutria’s fur, though double-layered, are not designed to sustain harsh winter.

While Muskrats have a thin, scaled tail flattened on the sides, Nutria’s tail is thick, rounded, and covered with coarse hair. Muskrats mate according to their breeding season, but Nutrias are non-seasonal breeders.

The baby of Nutrias is born fully-matured, while baby Muskrats take six months to reach maturity. Muskrats choose their habitat according to the availability of freshwater, whereas for Nutrias, the abundance of vegetation is of utmost importance.

Differences between Muskrat and Nutria

Although Muskrats are native to North America, they have now been introduced in parts of Europe, South America, and Asia as well. Most people refer to Muskrats as “rats” because of the commonly visible similarities between the two. However, they are not the members of the genus “rattus’, but of “ondatra”.

Out of about 140 different rodent species of the Arvicolinae subfamily, including Lemmings and Voles, Muskrats are by far the largest rodents.

Also known as Coypu, Nutria are the members of the family “echimyidae”, which is the family of the spiny rats.

These rodents are native to the temperate and subtropical regions of South America. However, due to the fur trade, farmers and traders have expanded Nutria’s horizons to North America, Africa, Asia, and Europe. Humans consider Nutria to be an invasive species for their destructive lifestyle that is problematic for them.

Although Muskrat and Nutria might have a similar appearance, both of them are different from each other is most aspects. Given below is a table that points out the difference between their lineage and touches some of their physical features

Now, let us discuss the distinguishing factors between Muskrat and Nutria elaborately.

How were they named?

Did you know that Muskrats were originally called “musk-beavers”? Their name can be broken into two terms, “musk” and “beaver”. The “musk” in their name signifies the musky odor they use to mark their territory, while they were called “beaver” because of their flattened tail similar to beavers.

However, later, people found more similarities between them and rats than beavers, and hence they began to be called Muskrats.

The Spanish term “nutria” can be translated to “otter” in English. Nutrias have thus been named so due to their similarities with otters. However, in order to avoid confusion in countries where people speak Spanish, Nutrias have also been named Coypus.

The fur of Muskrats might be short, but it is dense. The color of their fur ranges from dark brown to black, while the inner side of their body is lighter in color. Another interesting thing about muskrat’s fur is that it is double-coated to protect them from cold water.

As a Muskrat grows older, its fur starts to grey partly. Nutrias also have a two-layered fur, with a coarse outer layer and a soft under-fur. While their outer fur is yellowish to reddish-brown, the under-fur in grey in color. However, Nutria’s fur is less adaptable to colder climates than Muskrats.

While Muskrats have semi-webbed hind feet, Nutria’s hind feet are fully webbed. Nutrias also have a white patch on their muzzle and incisors in a bright orangish color that Muskrats lack.

Like the whales, the bodies of Muskrats are also less sensitive to carbon dioxide build-up than the other mammals. This is why they can swim underwater for about 15 minutes before catching their breath. Muskrats can also close their ears off while swimming, while Nutrias can do no such thing.

The overall size of an average-sized Muskrat is about one foot, which is half of the Nutria. A Nutria’s body is roughly two feet long, with the tail taking up half of it. If you can place the two side-by-side, you will see that the muskrat only measures up to the Nutria’s tail.

As far as their weights are concerned, the Nutria weighs at least twice as much as an average-sized Muskrat. While Muskrats usually reach up to their weight of 5 pounds, a fully-grown Nutria can weigh as much as 10-15 pounds.

Muskrats have a thin tail that is flattened vertically on the sides. Instead of hair, their tail is covered with scales. The tail comes in handy when they swim; it moves in a rapid, serpentine motion, pushing them forward in the water.

When Muskrats walk on land, their tail drags behind them, leaving a trail that is unique and thus, easily recognizable. On the other hand, the Nutria’s tail is thick, rounded, and covered with coarse hair. It plays no role in swimming.

While both the male and the female muskrats are about the same size, in Nutrias, the males are always larger than the females.

Although Muskrats are not loners, they are highly territorial. They are usually arranged in a large family and live within a pre-decided, definitive territory.

If the Muskrats find their group getting over-crowded, the female Muskrats can even kick out their own offspring, who then look for or create another group. Even when Muskrats have cannibalistic tendencies, they do not part with their group.

While Nutrias are social rodents as well, the structure of their groups is different from that of Muskrats. While there can be any number of males and females in a Muskrat’s group, Nutria’s circle can only consist of a single male; the rest of the group members are all either females or their offspring.

While Muskrats are active throughout the day, Nutrias have nocturnal tendencies and are most active during the night. They spend their nights in swimming, grooming, and feeding.

While Nutrias are non-seasonal breeders, the Muskrats have a specific breeding season. Their breeding is generally between March and August. Muskrats mate while they are partially submerged in the water. The gestation period in Muskrats (about 28 days) is roughly four times shorter than that of Nutrias (between 120-140 days).

When baby Muskrats are born, they are completely hairless, blind, and are only about 20gms in weight. It takes these little rodents six months to mature.

If the climate is colder, the process of maturation can take up to a year. On the other hand, Nutrias give birth to babies who are precocial. They are furred and can open their eyes from the moment of their birth, and take only a couple of hours to start eating normal food as their parents.

A baby Nutria stays with its mother for about eight weeks at the most, after which it is fully mature and leaves the group on its own.

The eyesight of Nutrias is limited. While little is known about how they communicate with each other, it is believed that they probably used chemical, tactile, and auditory channels to get the job done.

On the other hand, the Muskrats use their musk dominantly for communication. The musk of Muskrats is an oily, liquid substance secreted from a gland near their anus that has a unique odor.

The musk is used as a chemical message by the Muskrats to find out the identity of a resident or the sexual condition of the muskrat who secreted it. However, it doesn’t mean that Muskrats aren’t tactile.

They are believed to engage in kissing and mutual grooming. Muskrats also tend to whine and occasionally chirp, which could be used as a means of communication as well. When in danger, Muskrats slap their tails on the ground in order to alert the others.

One of the significant differences between Muskrat and Nutria is the kind of food they eat. While the muskrat is an omnivorous rodent, Nutria is purely herbivorous.

Although Muskrats are not herbivorous, their feeding tendencies are primarily plant-based. As long as they can find plants like water lilies, ferns, cattails, pondweeds, etc., in their surroundings, they are quite content. However, if there is a shortage of plants in their locality, they can also feed on frogs, snail, shellfish, etc.

Nutrias are extensive eaters and consume about ¼th of their body weight on a daily basis. They have a typical tendency of eating both above-ground stems of a plant as well as digging through soil to eat their roots and rhizomes.

The area where they feed is known as “eat-outs”. These eat-outs disrupt the habitats of both animals and humans living in specific areas. Nutrias also occasionally feed on floating logs if they can find them. Rice and sugarcane plants are a favorite of Nutrias.

Both Muskrats and Nutria prefer freshwater to saltwater. However, their selection of homes is based on different factors. Muskrats like to live in an area where the water is in abundance (at least 4-6 inches), and its level stays constant.

While they can live in swamps, ponds, and lakes, their ideal location is marshes. They create burrows at the banks in which they live. These burrows are a mix of mud and plants and have an underground entrance.

Nutrias choose their habitat in accordance with the availability of vegetation on the banks. They are mostly found in lake edges, slow streams, and marshes. Nutrias prefer to dig their homes in ditches near river banks, which they cover by using foliage.

Both Muskrats, as well as Nutrias, are known to create serious troubles for humans. Both of these rodents are known to eat grains just before the harvesting season. This, however, is the least of the problems they cause. They have a tendency to create their homes near the dikes, which ultimately leads to the destroyed structure.

Nutrias pose another threat to the wetlands. They have a large diet and feed on the vegetation from both above and below. During winters, they become even more destructive due to the lack of vegetation above the ground. Wetlands are considered to be essential economic as well as ecological resources.

Therefore, people in different parts of the world are attempting to control the population of these rodents. In many states/countries, they are included in the category of pests.

It is easy to get confused between Muskrats and Nutrias at first glance: both these rodents can appear similar unless examined closely. However, if you want to find out how they are different from each other, it is best to look more closely and understand their feeding, nesting, and behavioral patterns.