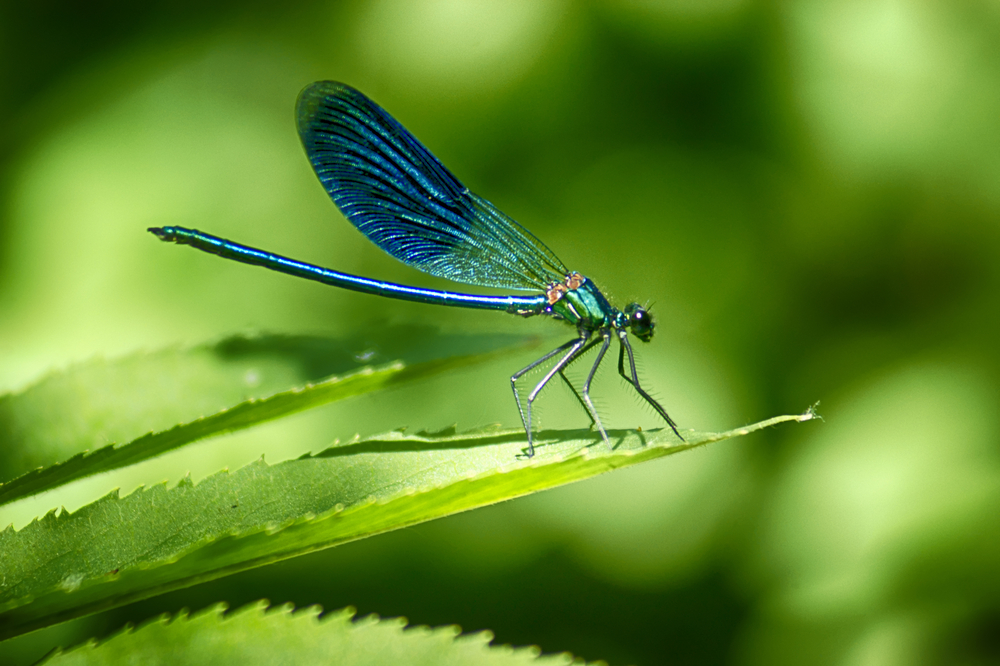 Adult dragonflies eat small flying insects such as mosquitoes, but in the early stages, they spend their time underwater eating any bugs that are smaller than them. Similar to raptors, dragonflies catch prey with their legs.

Dragonfly eating habits are interesting, and there is so much more to learn.

Adult dragonflies are really amazing in how they hunt their prey, and I am excited to tell you about them!

Have you ever seen a bird swoop down and catch a fish or a mouse with its legs? That is really similar to how dragonflies catch their food.

Dragonflies are one of the most intense predators out there and would be much more fearsome if they were larger. They are experts at tracking flying prey as well as catching up to them.

So what are they equipped to eat?

Have you ever been outside and seen a swarm of slow-flying insects? Bugs like that are the perfect prey for an adult dragonfly. A dragonfly will perch itself on a branch with a good view of an open space where such bugs might be found, and then it will use its thousands of lenses in its eyes to track its prey in the sky.

Adult dragonflies will eat a variety of prey, including but not limited to:

Dragonflies have a very specific set of equipment that helps them catch and eat their prey, and understanding their different assets will help you understand why they eat the things they do.

Dragonfly wings are really amazing, and they are perfect for being one of the best aerial predators on the planet.

Many people will laugh at me when I say that dragonflies are one of the best aerial predators, but even hawks and eagles are not equipped with 4 wings that can move independently of the other three. These wings are perfect for quickly reaching speeds of up to 30 miles per hour that is needed to catch up to speedy prey.

Birds of prey normally are going after small rodents, reptiles, and fish that mostly require speed and stealth. Dragonflies need even more advanced tricks to survive in their insect-sized world, hence the need for 4 wings instead of 2. Dragonflies rely on their ability to accelerate as well as maneuver in the air to catch their prey that has relatively unpredictable movement.

The four-wing set up really is the perfect vehicle for a predator that is this size, and it starts to make more sense that this insect is named after a mythical flying predator.

The eyes on a dragonfly are one of the most intense creations presented by mother nature. Many bugs have what are called “compound eyes” meaning they have many different angles by which they can scout the surrounding area for prey.

Dragonflies also have compound eyes, except they are eyes designed for a predator. Dragonfly eyes are much larger than most insect eyes and cover almost the entire head. These eyes leave just enough room for the mouth in the front as well as space in the back for quick neck muscles.

When a dragonfly hunts, it perches in its favorite hunting grounds and keeps its eyes peeled (pretty easy since they have no eyelids). If you sit and watch a dragonfly on its hunting perch, you will see it swing its head back and forth quickly. What it is doing is tracking its prey, and deciding if it is worth the trip. If the answer is yes, then the dragonfly will take off at lightning speed and swoop down and bring its prey to a swift end.

The final piece of the dragonfly arsenal are of course the legs.

If you look closely at a dragonfly, you will notice that its legs are not the simple bendable exoskeleton that other insects have. The legs of a dragonfly are equipped with small barbs designed for trapping prey.

These legs are using in aerial hunting as well as ground dives to grab prey and bring it closer to the mandibles to be consumed. Pretty cool huh?

Many people do not understand the life cycle of a dragonfly, and that is understandable. Dragonflies actually have a 3 stage life cycle, and it is really cool. They start as eggs and are normally laid in some form of water. These eggs then hatch into nymphs, which are very small at first, and eat just about anything that it can capture, including other nymphs.

These nymphs can be pretty ravenous, and if you are fascinated by this sort of thing check out this video:

What do dragonfly nymphs eat?

I know I said they will eat just about anything, but I think it is good to get some examples

These Nymphs may not have as much equipment as they do when they become mature adults, but they do have one special piece of equipment that is very unique:

Dragonfly nymphs don’t joke around. These feisty little bugs pack a punch with a device that is quite unique in the world of insects. They come equipped with an extendible jaw, almost like the chameleons extendable tongue, but more vicious.

Imagine being able to have your mouth extend out in front of you 3 feet to bite down on whatever you want. Pretty cool right?

Now imagine that same thing but instead of just extending, your jaw moves with the force of a strong punch. That is one nasty bite!

These little guys use this jaw structure to break apart the exoskeleton of any prey that may come around. They can cut through fleshy prey with easy, and breakthrough almost any armor.

Since dragonflies actually spend more than 10 times the amount of time as a nymph then as an adult dragonfly, it makes sense that their nymph stage would be even more aggressive and hardcore. These nymphs are the bullies of the freshwater ecosystem.

Some are aggressive hunters that roam the pond like they own the place. Some are patient ambush killers that lie in wait for prey. Some even hide in plain sight using camouflage so that the older members of their species cant find them and eat them for a snack.

Raising dragonflies is a little more complicated than just putting them in a tank and dropping food in.

If you plan on keeping a dragonfly as a pet, you have a few decisions to make:

1: Do I want a dragonfly nymph, adult, or both?

This is a really important question to ask.

If all you want is an adult dragonfly, then simply go catch one and put it in some kind of large mesh enclosure. Dragonflies are large, and most mesh enclosures will keep them inside just fine.

If you want a dragonfly nymph, things are going to get a little more complicated. Having a dragonfly nymph as a pet is about as complicated as owning a fish in terms of set up. You need to have a decent freshwater fish tank with living plants and algae in order to help the nymph survive. That being said, you can easily get a simple freshwater tank running using the same water, soil, and even plants from the very same pond that you got your nymph from.

In my opinion, the coolest part about dragonflies is the metamorphosis, and so naturally you are going to want to raise your nymph into a full-blown adult. This requires the perfect set up. You need a really nice freshwater habitat for your little friend to hunt in, as well as grow large enough to become its final adult form.

What you need is a 10-gallon glass fish tank, soil and water fresh from the pond you plan on getting your nymph, a simple fish tank filter and air pump, and some kind of UV light. All those things should help you get started in having the very best setup for a full dragonfly metamorphosis.

2: How am I going to capture/find food?

It can be really hard to find proper food for your nymph or adult dragonfly, but if you have the right tools it can be pretty easy.

Adult dragonflies are really easy to find food for. All you need is a large bug net and some time. The best thing to do is go outside when it starts to cool down and swing your bug net through one of those nasty swarms of bugs, and then twist the net. You should have at least a dozen bugs to throw in your dragonflies habitat. If your dragonfly is in a mesh cage like I suggest, then the easiest thing to do is put something in there that attracts flying insects that are small enough to fit through the mesh and then just leave the enclosure outside.

Dragonfly nymphs are not so easy. You need to find things that are smaller than your nymph that it can easily kill and eat. The best thing that I have found are small worms and larvae. You can get a simple composter going and have plenty of worms, or you can make your life really simple and just buy some mealworms at your local pet store.

Dragonflies are not too picky, and they should be able to eat just about anything that isn’t too tough.

3: How much money am I willing to spend?

Something I encounter with a lot of people is that they want to get into pet ownership on a really tight budget, and that is totally doable, but just be aware that you are really limited on choices when you try to go cheap.

If you don’t want to spend more than 40 dollars, then I really recommend just capturing an adult dragonfly and throwing some food in there every day. Although a simple enclosure isn’t going to be the best for it, at least you get to see how it hunts up close.

Really the best experience you can have is if you decide to spend 100 dollars on a really nice fish tank with a really fleshed out ecosystem of snails, plant life, and a healthy nitrogen cycle. Take that fish tank and get it ready for a nymph by adding a tiny bit of dry land where it can go to change into an adult. Feed the nymph all sorts of stuff, and watch it grow into a fierce predator. That experience can last years, and then set it free when you are done! Super fun and interesting

Do dragonflies bite? If handled improperly, dragonflies will try and bite anything they can. Most dragonflies cannot break the skin, but the largest of them will cause some discomfort.

How long do dragonflies live? Dragonflies complete life cycle can last 3 years, but only 1-2 months of that will be spent as an adult dragonfly with wings outside the water. Most dragonflies that you see are within weeks of dying.