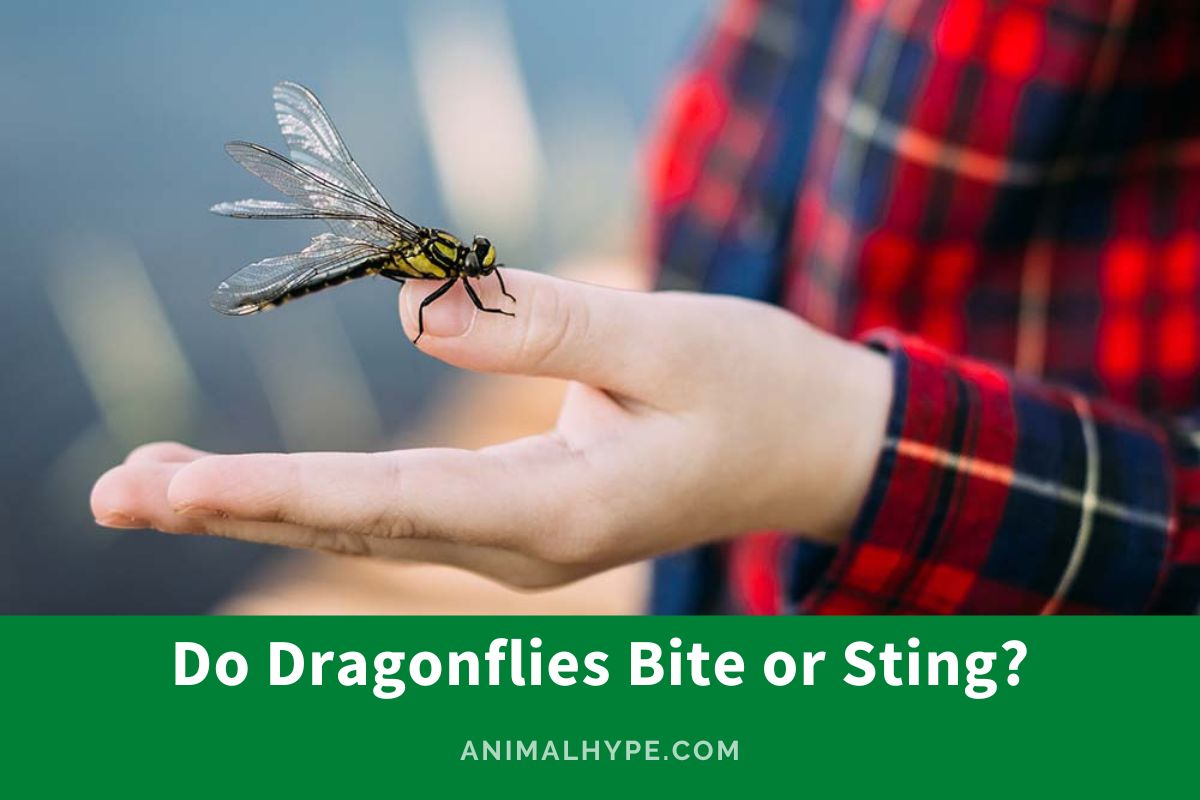 We have all seen them flying around our backyards during the spring and summertime.

Most of us have had them fly in and land on our fishing poles while out on the lake or fishing in a river and I’m sure that most of us have caught a few of them.

Is it just a peaceful harmless insect? Or will a dragonfly bite or sting you?

Do dragonflies bite or sting? Yes, a dragonfly can actually bite you however, a dragonfly is unable to sting. Generally, the dragonfly isn’t considered to be a mean and violent insect. Dragonfly tries to bite you if you hold it in your hand, but due to lack of sufficient force, it is unable to pierce human skin even with the help of two sharp mandibles.

How do dragonflies bite?

So with that being said, if you manage to catch a dragonfly, while it is in your hands, it is quite possible for its mandibles to reach down to your skin and it will, in fact, bite you. And it will bite you as hard as it can. But no need to worry, it is not that hard.

Most dragonflies produce a bite that isn’t even strong enough to break the skin on a human, but some of the larger ones can and will leave a nice little mark if it decides to actually bite you. But the dragonfly doesn’t just fly around, searching out humans to sink its mandibles into.

They are a pretty non-aggressive, peaceful insect. But it will bite you if it is caught and it feels like it is in danger.

Well, we all learned that a dragonfly can, in fact, bite you But what about a sting? Do dragonflies have stingers? The answer is a big NO. Dragonflies do not have stingers.

There are accounts though, of dragonflies stinging while in the process of laying their eggs. It is observed that if interrupted, they will continue the egg-laying process onto your clothing or if making contact, actually laying the eggs into the skin. That is where the old rumor came from dragonflies having stingers and stinging people.

So no need to worry about them having the same traits as a bee or a wasp. There are no stingers to worry about. But remember the dragonfly does have those sharp mandibles.

So overall there is no reason to duck and run for cover if one of them happens to fly around or land on you But a good thing to remember is that if you do catch one in your hands, and you accidentally get a little too rough for the dragonfly, there is a good chance it will get scared and feel threatened.

So it will try to bite you but its bite will hardly be noticed and won’t even break the skin or leave a mark, but the bigger ones may actually bite hard enough for you to feel it. But even the biggest dragonfly biting you, won’t even come close to comparing to a bee or a wasp sting.

Do dragonflies have teeth?

Dragonflies are classified into the Odonata insects category which basically means toothed one. Dragonflies were believed to have teeth but researchers have proved that it is just a myth.

Dragonflies actually do not have teeth but are known for its 2 sharp mandibles that they use to crush the small insects. They can catch mosquitoes and other small flying insects and crush and eat them using the sharp mandibles and jaws.

An average dragonfly can eat 50 to 100 mosquitoes per day. Therefore, dragonflies are known as human-friendly insects that eliminate many dangerous insects.

How aggressive are dragonflies?

Sometimes, people can observe dragonflies in a large group looking violent, but in reality, this is just a courtship behavior shown by male dragonflies trying to please females.

Even though these creatures are seen flying very near to people but dragonflies never hurt humans. They are very rarely seen trying to bite a human and when they do they can’t even break the skin.

They are very curious creatures and are found hovering around people but their intentions are never to hurt anyone. Due to this behavior, they are often considered a menace.

As I explained earlier, a dragonfly would never bite a human unless you hold it in your hand and make contact of your bare skin with its mandibles. Even then, most of the dragonfly species can’t even pierce the human skin. Only a few species which are large in size can pierce through the skin and that can make you feel a little pain.

Those bites are least dangerous and look like a small red dot, almost similar to other few bug bites. Although this is very rare, still if a dragonfly is able to bite you, it won’t cause any type of bleeding. It can, however, cause redness and a little burning sensation around the bite.

What Do Dragonflies Eat?