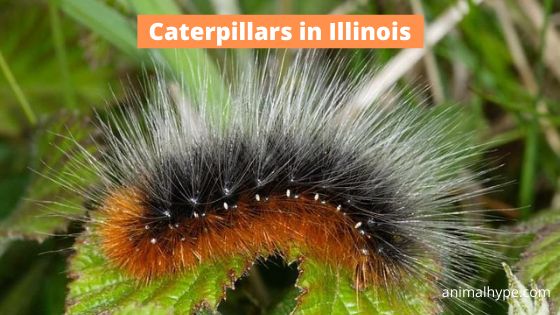 The body of the American Lady Caterpillars is tubular in shape with black and yellow bands around their body that are shaped like rings, the black bands thicker than the yellow ones.

Between two sets of yellow bands, you can spot several spots in white or reddish-brown. Wherever there are spots, there will be small bristle-like outgrowths.

These caterpillars feed on everlastings, marine algae such as cudweeds, and other Aster plants. 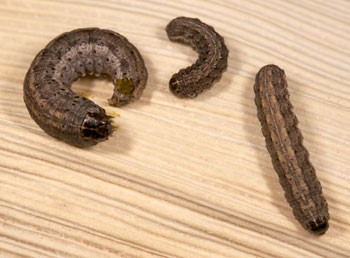 Endemic to North America, the Army Cutworms Caterpillars have a body that ranges from green to black in color. The upper side of their body is always darker in shade than the lower one. Their head is pure brown with several dark spots.

You will notice four vertically drawn lines on their body, two on each side, which seem to be bordering their dark dorsal region.

These caterpillars are nocturnal creatures who hide in the soil in the daylight and come out to feed when it is dark. However, you can spot them outside on a cloudy day. They feed on mustards and cheatgrass. They are also known for de-foliating the sagebrush and the four-wing saltbush.

The Fall Webworm Caterpillars have two variations; one of them is yellow in color with dark stripes and spots scattered all over them, while the second has a dull, bluish-black body that lacks any kind of spot or stripe. They have hair all over their body, with a head that is darker than the rest of the body.

The Eastern Tent Caterpillars have a black, tubular body with sparse hair growth. They have a distinct white stripe on their dorsal body that runs down the middle of their back. The rest of their body is covered with white and blue markings all over it.

These caterpillars have a peculiar habit of de-foliating their host trees thoroughly and then moving on to plants that are less preferable by them to feed on. They mainly feed on the foliage of hawthorn, plum, cherry, apple, and peach trees. Initially, the Io Moth Caterpillars have a reddish-orange body covered with spikes. However, when they at their prime, their body acquires a bright green color, with their spikes grown into thick, green spines that resemble the spikes on the Prickly Bear Cactus.

Along the length of their body runs a prominent red and white stripe. They can feed on trees such as elm, aspen, maple, willow, hickory, etc.

If you ever come across an Io Moth Caterpillar, beware of its spines for they contain small amounts of venom that they inject into anybody that comes in contact. It can cause pain and skin irritation. 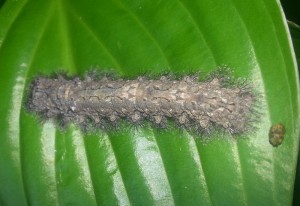 The Caterpillars of the Large Tolype Moths have a dull grey body with moderately-grown hair. They feed on soft foliage and leaves of a large number of trees and shrubs, such as plum, apricot, poplar, oak, almond, cherry, birch, citrus, apple, beech, etc. 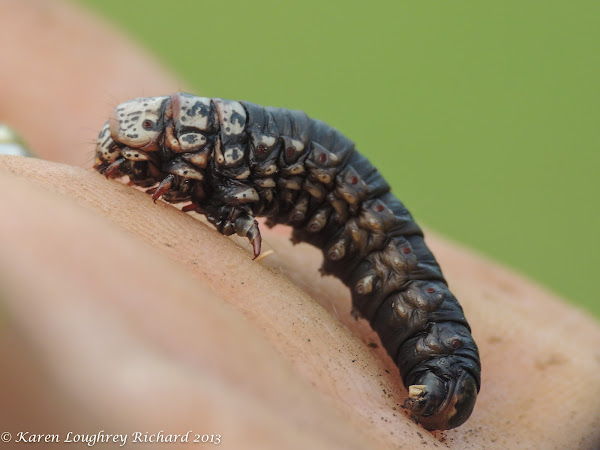 When you look at the Evergreen Bagworm Caterpillar at the first glance, it will appear like a moving pine cone to you.

This is because these caterpillars wrap themselves into a silky cocoon inside which dead plant matters are collected. They spend a large portion of their life hanging from a tree branch in their makeshift bag, camouflaging themselves. 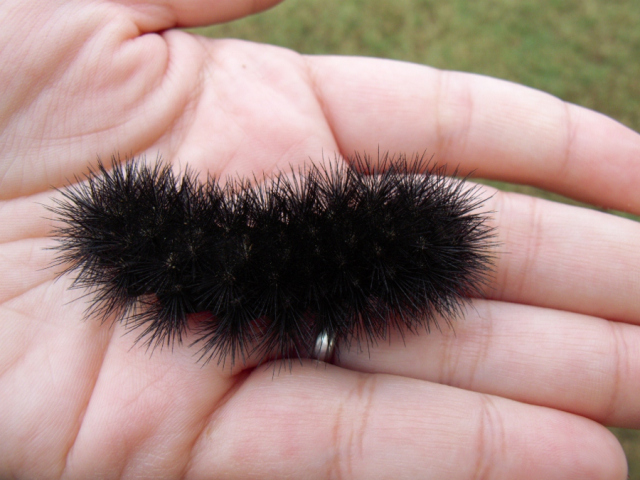 The Caterpillars of the Giant Leopard Moths have a long, fuzzy body that is overall black with several red rings on it.

Although these rings are not prominent, you can see them clearly when they move or roll up into a ball. These caterpillars have black spines all over their body except on the rings.

They prefer to feed on leafy plants such as magnolia, honeysuckle, violet, dandelion, lilac, broadleaf plantain, and citrus plants.

The Smeared Dagger Moth Caterpillars have a vibrant, tubular body covered in black, white, and yellow. While the dorsal side of their body has white and black stripes, the ventral part is yellow.

These caterpillars also have brick-red spine tufts growing out of their body at regular space intervals. If you come in contact with these tufts, you might suffer from itchy hives on the part of your skin that has been exposed to it. They can feed on all plant matters ranging from grass to trees.

They have a dull, brown body that is covered with darker spines. Since oak trees are the main diet of these caterpillars, you can always find them near one. The spines of the Buck Moth Caterpillars are highly venomous and cause a severe burning sensation in your skin. 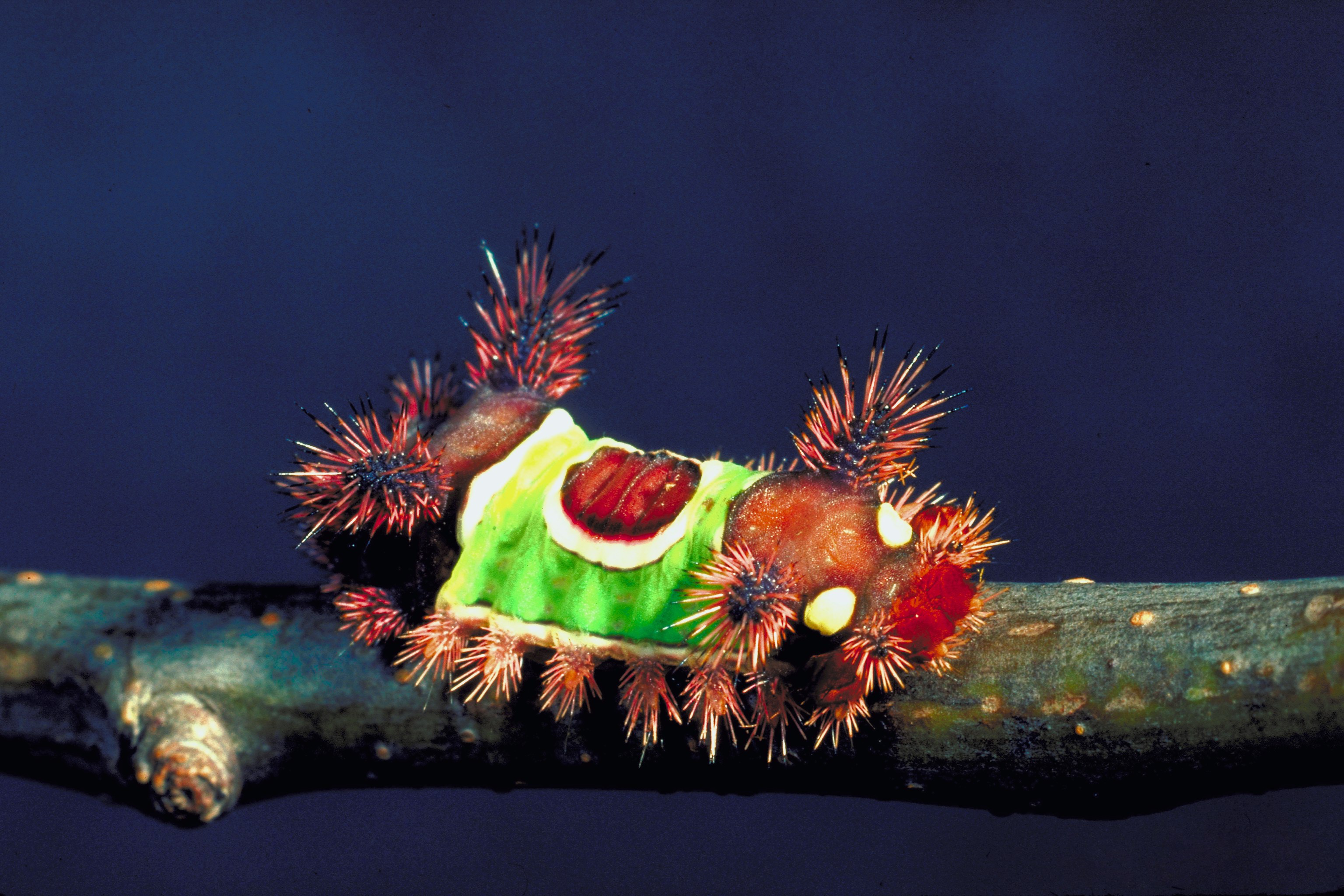 Although the Saddleback Caterpillars are not very large in size, they are so remarkably unique in appearance that if you ever come across one, you shall never forget how they look. They are called “saddleback” because of the bright green saddle-like pattern on their back with a small brown circle in the middle.

On either side of the saddle are four maroon spiky horns. The ventral side of their body is also covered with smaller and lighter spikes. On one end of their body are two white spots that appear like two menacing eyes.

These spots give them an angry look that keeps both humans as well as other animals away. The Saddleback Caterpillars feed on corn foliage, basswood, chestnut, pear, cherry, oak, plum, and other trees that blossom in the late summer. 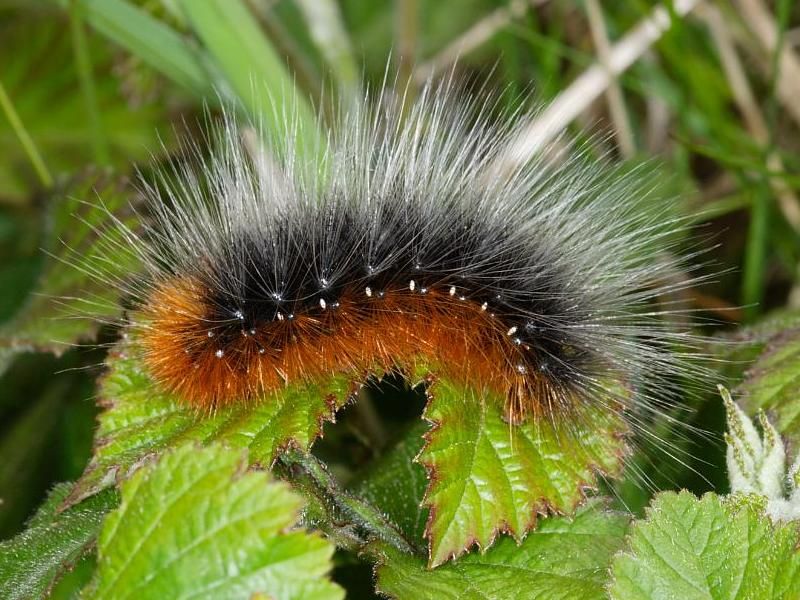 The Caterpillars of the Great Tiger Moths have a dull body in comparison to the mature adults. The upper side of their body appears greyish-black like charcoal, while their underbelly is a rich shade of chestnut. Their hairs on their dorsal parts are long and thin, while those on the ventral side are short and spiky.

These caterpillars are commonly found in the arboreal forests where they feed on plant leaves from a variety of weeds, shrubs, and trees. 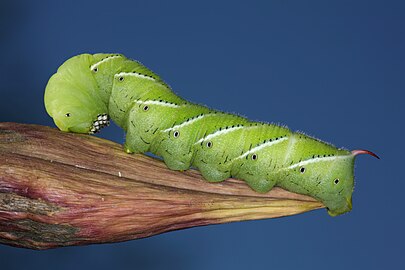 The Tobacco Hornworms are sphinx caterpillars that feed particularly on tomatoes. If you grow tomatoes in your garden, you should be on the lookout for these caterpillars. They have a light-green body that has seven diagonal white markings on it. They also have a dull-red horn on their head. 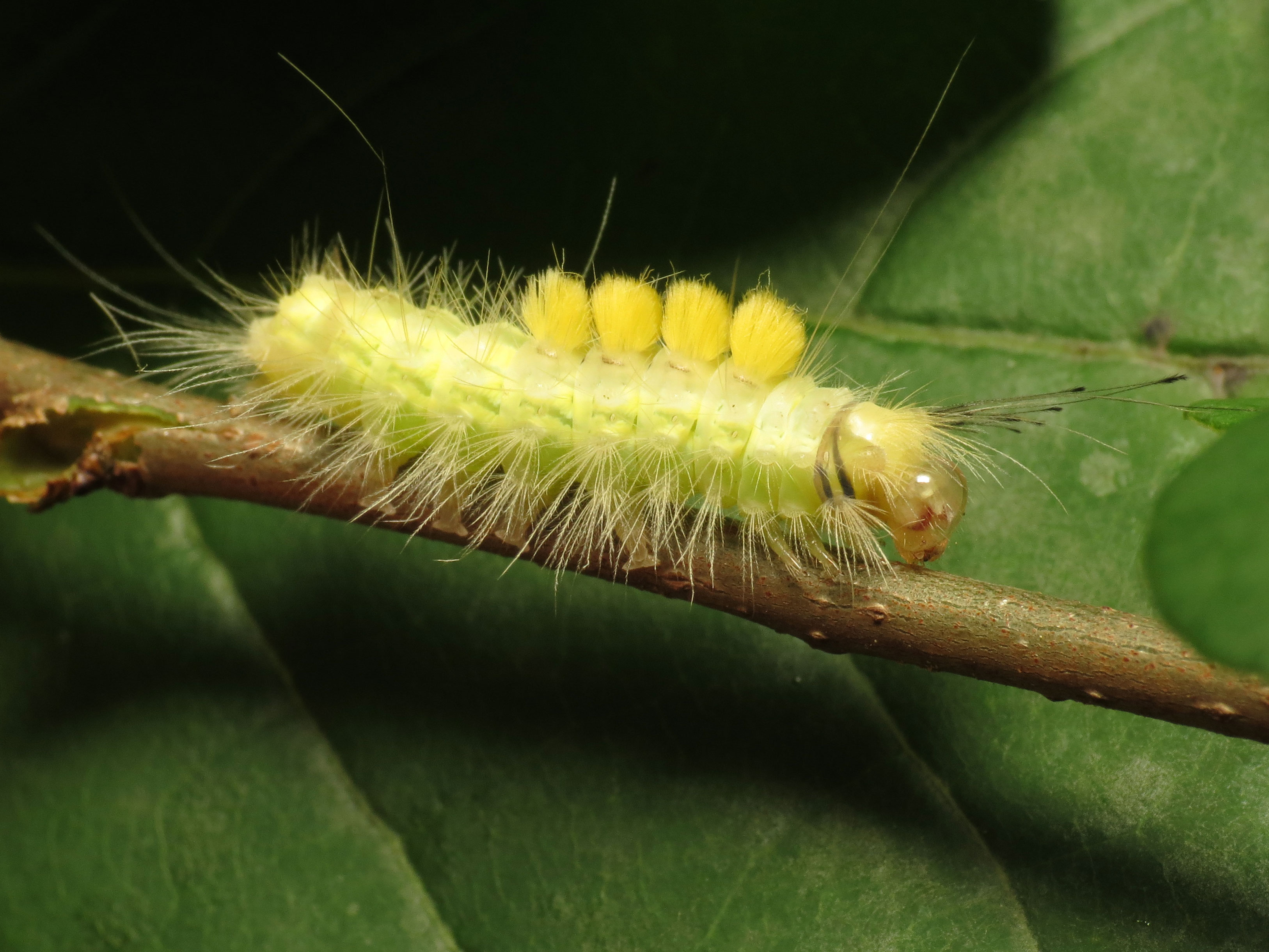 The Definite Tussock Moth Caterpillars have a pale green body with a yellow head as well as yellow hair-tufts that appear very much like the bristles of a toothbrush. They are also known as the “yellow-headed caterpillars” in many regions. These caterpillars feed on the trees of basswood, birch, oak, and maple. 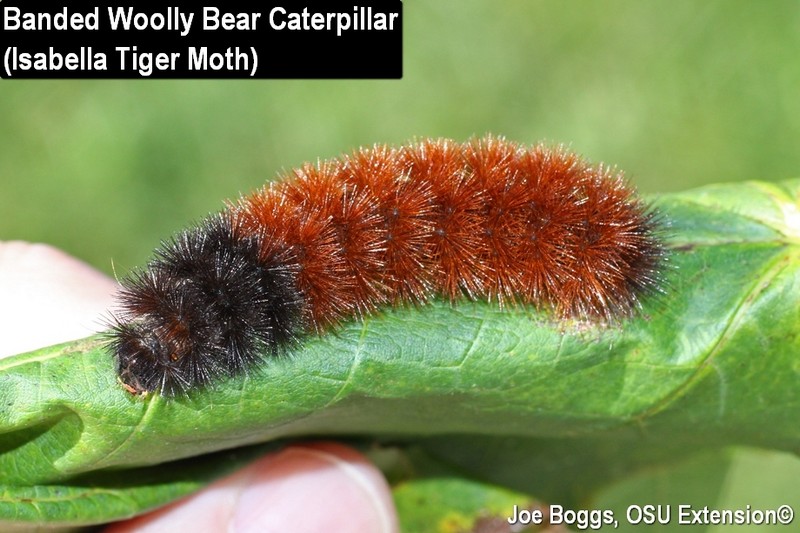 The Banded Woolly Bear Caterpillars have a small but fuzzy body and are completely harmless creatures. Although they might appear to have spikes all over them, these are in fact hairs that are so fragile that they will break off if they come into contact with anybody.

Their body is covered in three wide-color bands; while the first and the last is black, the one at the center is brick-red in color. These caterpillars eat sunflowers, birch and maple trees, weeds, nettles, dandelions, grass, herbs, aster leaves, etc.

The Forest Tent Caterpillars have a moderate-sized body that is dominantly covered with blue and black, with the exception of small, white, footprint-like markings that appear in a row on their back.

Although they have hair, most of them are thin and white and grow at the base of their body. These caterpillars are usually found in deciduous forests since they feed on the leaves of the deciduous trees. 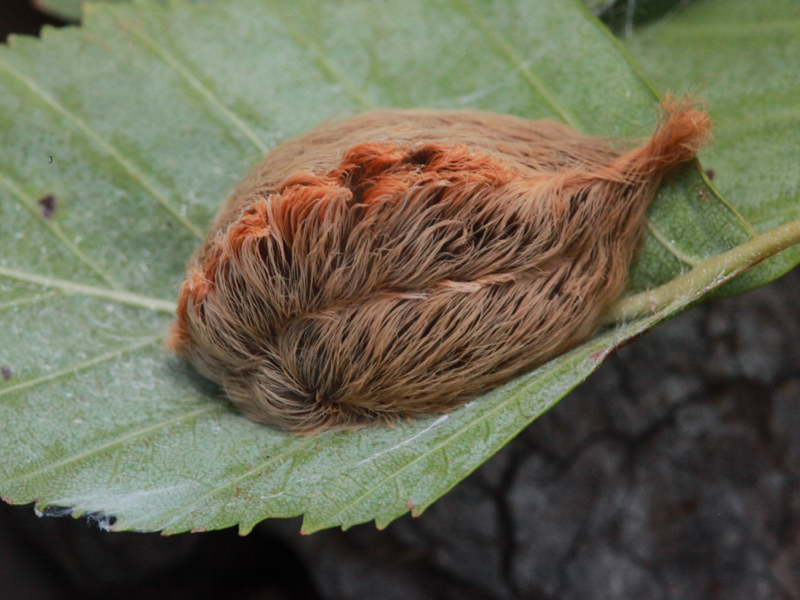 The body of the Puss Caterpillars is dull brown in color and is coated with thin and long luxuriant hair-like structures which makes them look like a small Persian Cat. It is the sole reason behind them being named “puss”.

Although their fur looks harmless, puss caterpillars are filled with venom that can cause humans severe pain if they touch it. The main diet of these caterpillars is the leaves of willow and poplar trees.

As far as caterpillars are concerned, the Luna Moth Caterpillars are among the larger caterpillar species found in Illinois. Their body is covered in a rich shade of lime green with sparse hairs. You can also spot several small magenta spots on their body.

Just below their spiracles runs a pale stripe that covers their entire body. Luna moth caterpillars feed on the foliage of a number of shrubs and trees, including sumac, walnut, persimmon, hickory, and sweetgum.

They also have black rings and white spots on their body. Since they are defenseless against predators, these creatures carefully look for a safe space to plant themselves until they pupate. They can eat the foliage of oak, sassafras, pine, box elder, maple, and sweetgum. 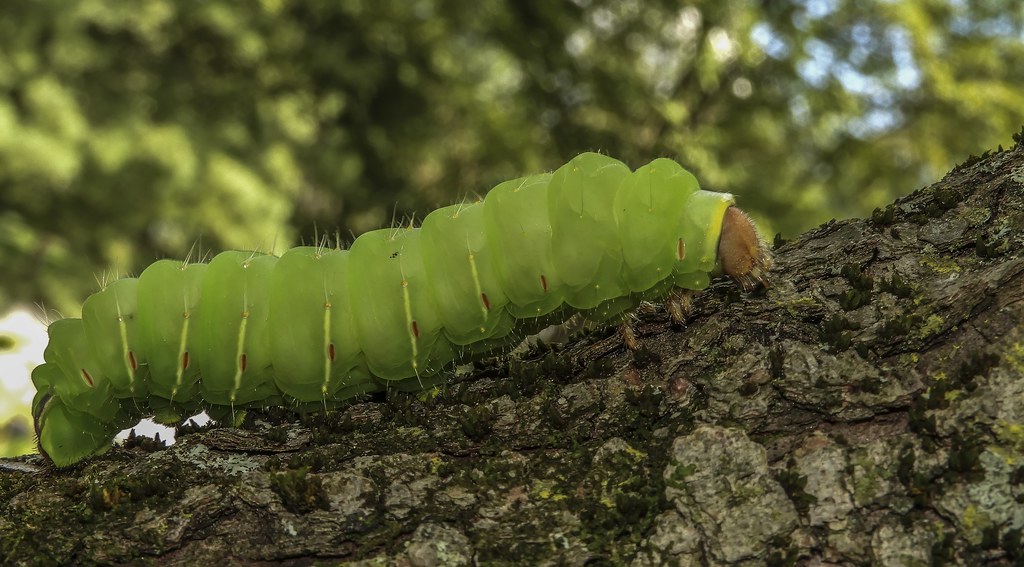 An interesting fact about the Polyphemus Moth Caterpillars is that they can eat food that is about 86,000 times their own weight in their first couple of months.

These caterpillars have a lime-green body that is more geometrical in shape instead of being simply rounded. They mostly food on deciduous trees and woodland shrubs like willow, cherry, walnut, oak, maple, elm, poplar, alder, tulip, sweetgum, hawthorn, etc.

Species of Caterpillars in Illinois (endnotes)

Caterpillars come in a variety of shapes and sizes, each one more colorful than the last. Some of them are hairy, while others have brightly-colored bodies. The number of legs different in them as well. The next time you spot a Caterpillar, an understanding of its appearance or behavior based on our article will help you recognize its species.

100 Species of Caterpillars in North Carolina