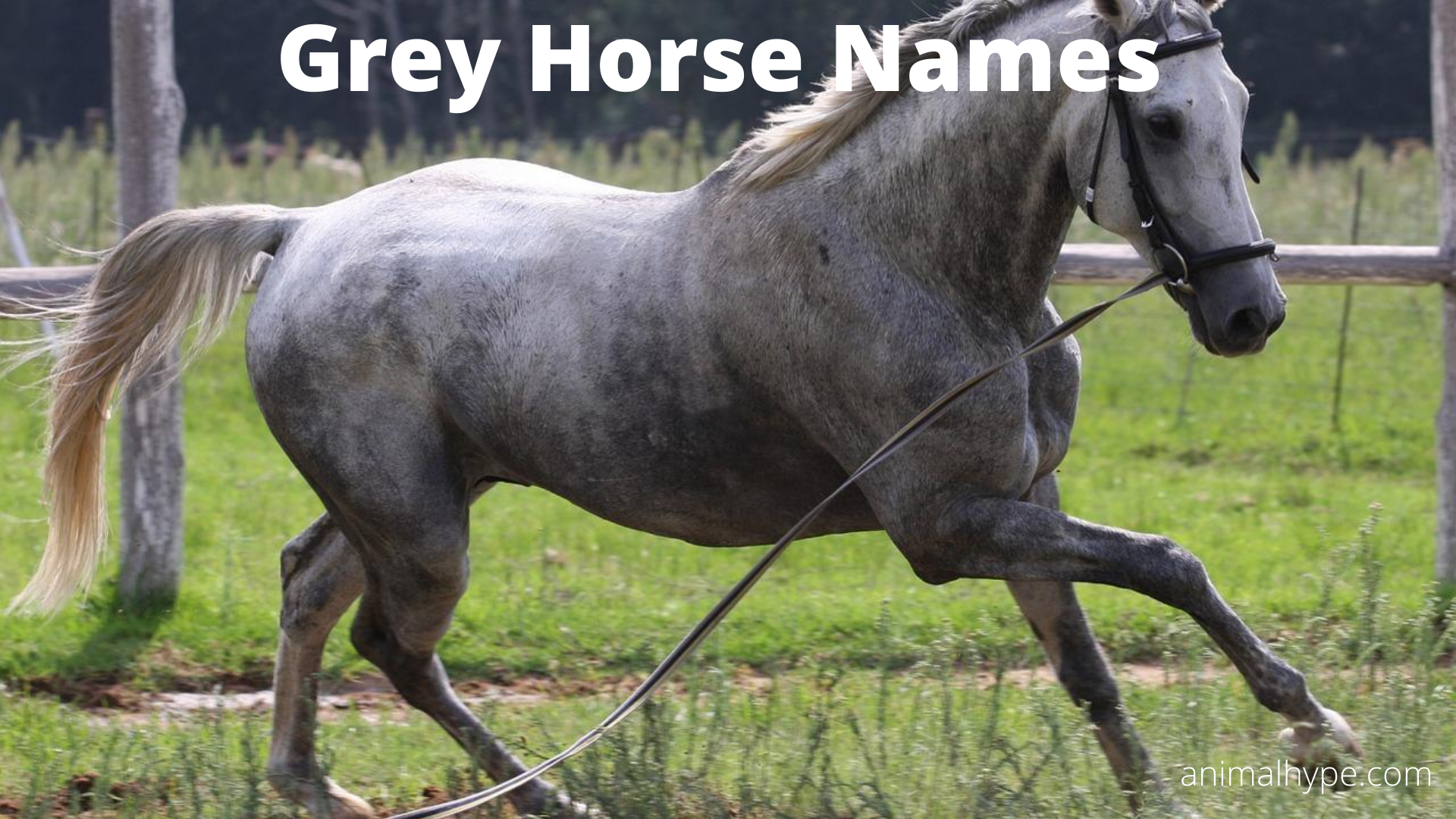 Grey horses are a unique variant of horses that can be present in all breeds, although it’s more common in breeds wIth Arabic ancestors like the Percheron. What makes grey horses unique Is the slIght metamorphosis they experience throughout their life. Most foals start with dark hair and few with white hairs.

Becoming lighter as they grow up until eventually, most grey horses become totally white except for their skin which is black.

Grey horse’s natural transformation creates unique patterns In their ever-changing coat which makes them look stunning. This, together wIth their ancestry makes grey horses one of the most desired color variants for horse enthusiasts.

If you’re one of the lucky ones that own a grey horse you might want to honor the magnificence of these horses by giving them a name that suits them perfectly. Here we’ve put together a list of the best names for grey horses. 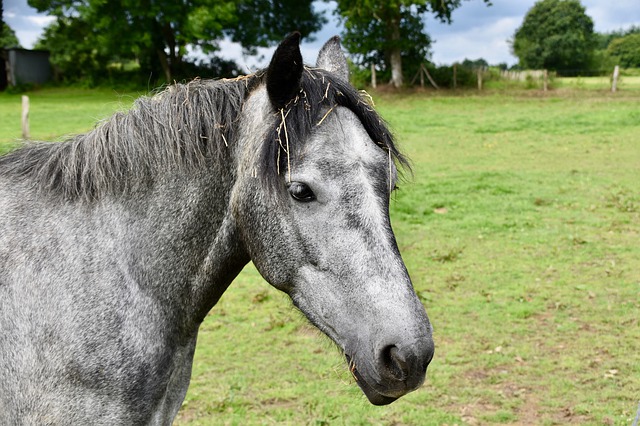 Along with dogs, horses have been, since ancient times, a very important companion for humanity. They have helped us with transportation, exploration, and war. Thanks to all their contributions, it’s not surprising that there have been many important horses named in our history, culture, and our art (like film or literature).

Here we’ve gathered some of the most Important horse names in pop culture, ideal for a grey horse.

Shadowfax – From the renown saga, The Lord of the Flogs written by J R R Tolkien Shadowfax was the lord of all horses. lt was said that he was capable of understanding human speech and run faster than the wind.

Sombragris – The Spanish translation for Shadowfax, it means grey shadow.

The Lamb – One of only three grey horses to ever won the Grand National.

Native Dancer – The third grey horse to win the Grand National. He was also voted as American Horse of the Year and was a runner-up in the Kentucky Derby.

Desert Orchid – Considered the most popular grey horse in the world, he won King George VI Chase four firms a record at the firm.

Greyhound – Considered the greatest trotting horse in the history of the sport. He was nicknamed “The Great Grey Ghost”

Babieca – The warhorse of the Cid Campeador, a hero of Spain and of ancient Christendom. Babieca was fierce and the Cid loved him so much that he asked to be buried together.

Palomo – The horse of Simon Bolivar, a Latin-American leader that led several countries of that region towards independence from Spain.

Traveler – The stage name for the official live animal mascot of the University of Southern California.

Rocinante – Although not clearly defined, most representations of Don Quixote’s horse show him as a grey horse.

Horses are among the fastest land animals In the world. Most of Its early evolution happened In the North American continent but they became extinct this continent 10,000 years ago.

The horse survived In Europe and Asia, where they are domesticated for about 6,000 years ago. Horses were reintroduced to North America in the XV century by Spanish conquistadors.

Since then the whole world has had an Intertwined relationship with horses. Where many cultures have developed around them. including the Mongols, led by Genghis Khan. The Mongols forged the biggest empire the world had ever known only surpassed by the British centuries later.

Several factors contributed to the Mongols success but undeniably the horse was one of their most powerful weapons of war. Here we’ve put together a list with names suitable for any horse be it stallion or mare.

Ramadi – It means grey In Arabic.

Cache – It means concealed or secret In French.

Faios – It means greyish in Greek.

Liath – It means grey In Irish.

Fleckig – It means spotty or patchy in German.

Derobe – It means concealed in French.

Shabh – It means phantom In Arabic.

Enastros – It means starry in Greek.

Ombre – It means shadow in French.

Manchas – It means spots In Spanish.

Ceo – It means fog In Irish.

Sternenklar – It means starlit In German.

Brouiller – It means blur or scramble in French.

Amanecer – It means dawn in Spanish.

Aistatar – It means occult or lurks In Arabic.

Realoir – It means starry In Irish.

Tache – It means spot, stain, or patch in French.

Mystikos – It means secret or mystical in Greek.

Fugaz – It means fleeting or transient in Spanish.

Grisonnant – It means greyish in French.

Mamu – It means hidden in Arabic.

Desvanecer – It means to vanish or to dissipate in Spanish.

Orage – It means a thunderstorm in French.

Intact male horses are known as stallions if they are used for breeding or just as horses if not. Geldings are usually bigger than stallions, and male horses, in general, are a bit bigger and heavier than female horses (mares).

Many stallions have been named throughout history including some of the most famous warhorses like Bucephalus, Babieca, or Marengo. It’s with this in mind that we’ve put together a list to honor these stallions’ powerful descendants.

Maidhm – It means mist or earthquake in Irish.

Huzn – It means melancholy in Arabic.

Viento – It means wind in Spanish.

Bunt – It means colorful, multicolored, or particolored in German.

Ushib – It means frosty in Arabic.

Ouragan – It means hurricane in French.

Achnos – It means vapor in Greek.

Humo – It means smoke or fume in Spanish.

Muthlaj – It means frosted or frozen in Arabic.

Grele – it means volley or spray in French.

Manchado – It means potted in Spanish.

Foumaro – It means smoke in Greek.

Shihab – It means meteor in Arabic.

Deatach – It means smoke in Irish.

Nublado – It means cloudy in Spanish.

Dabab – It means fog or vapor in Arabic.

Diluvio – It means deluge or downpour in Spanish.

Khafiin – It means cryptic or covert in Arabic.

Nebel – It means fog in German.

Mustatir – It means concealed in Arabic.

Tyfonas – It means typhoon in Greek.

Mukhtaf – It means hidden in Arabic.

Horses in general experience less external sexual dimorphism than humans, where males are just a bit bigger and heavier than females. Although due to testosterone, Stallions are known to be more aggressive than mares.

The easiest way to identify a mare from a horse is to check under her belly to find her udder.

Throughout history, there have been many great mares that have had great achievements. Many mares are champions around the racing tracks all over the world. Their foals are priced in the millions, and they themselves are reserved for only the most successful and prestigious stallions.

It’s with this in mind that we’ve put together a list of names that reflect the beauty. agility and skill of these magnificent creatures.

Zulma – It means murky in Arabic.

Lonru – It means shimmering in Irish.

Astre – It means luminary in French.

Himmel – It means sky in German.

Tormenta – It means storm in Spanish.

Alsama – It means the sky in Arabic.

Thyella – It means tempest in Greek.

Cometa – It means comet in Spanish.

Vrochi – It means rain in Greek.

Briller – It means glitter or sparkle in French.

Sahaba – It means cloud in Arabic.

Fumarola – It means fume or fumarole in Spanish.

Vourkono – It means cloud in Greek.

Ghashaa – It means trance in Arabic.

Rauch – It means fume in German.

Sneachta – It means snowfall in Irish.

Nube – It means cloud in Spanish.

Lampsi – It means shine in Greek.

Regen – It means rain in German.

Najima – It means star in Arabic.

Ventisca – It means blizzard in Spanish.

Wolke – It means cloud in German.

Najmay – It means starry in Arabic.

Cielo – It means the sky in Spanish.

Avgi – It means aurora or daylight in Greek.

Horses have been an extremely important companion for mankind. Without them, our progress to conquer the world would’ve been extremely slow.

Any person lucky enough to own one must understand the importance of those creatures. To reflect this fact, horses must receive proper care and love. While not the most important, choosing the perfect name for your horse is one of the first steps towards a long-life companionship between you and these wonderful creatures.