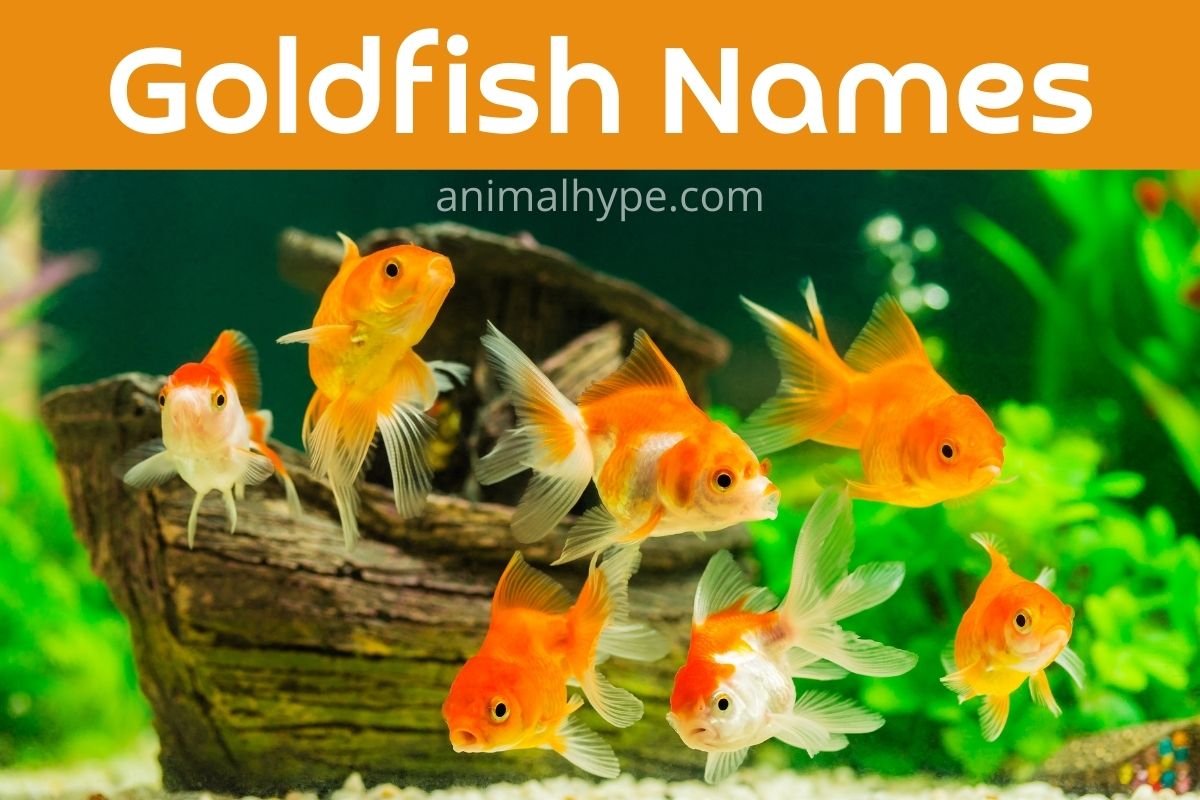 Goldfish are a relatively small fish from the carp family of fish. Their small size, the fact that they’re freshwater fish, and their ability to survive in captivity make them one of the most commonly kept aquarium fish.

Goldfish also don’t need a companion to survive, so pet owners who want just one fish are in luck. If, however, you want to add a goldfish or two to your aquarium full of other fish, goldfish will get along well. These fish are not aggressive, but it’s best to pair them with other fish that are about the same size.

Once you’ve decided on the basics, like how many goldfish you are keeping, you need to figure out what you will name them. This comprehensive guide on cool and funny names for goldfish should point you in the right direction.

Billie EiFish: If you listen to pop, electropop, or trap music, you must’ve heard some of Billie Eilish’s hits.

Billie Eilish became famous for her song Ocean Eyes, which she released when she was only 13.

So, if your goldfish is as cool as Billie (it is), you should go for the name Billie EiFish.

If you’d prefer to stay away from puns, then these female goldfish names might pique your interest.

Elvis Fishley: Following the trend of making a pun out of musicians’ names from the previous category, we now have Elvis Fishley. Elvis Fishley is, of course, the fish version of the King, i.e., the legendary rock and roll star (uhh, thank you very much!).

If you’re not much of a jokester, then take a look at these male goldfish names. Are you looking for a cool name for your pet goldfish? Well, look no further. 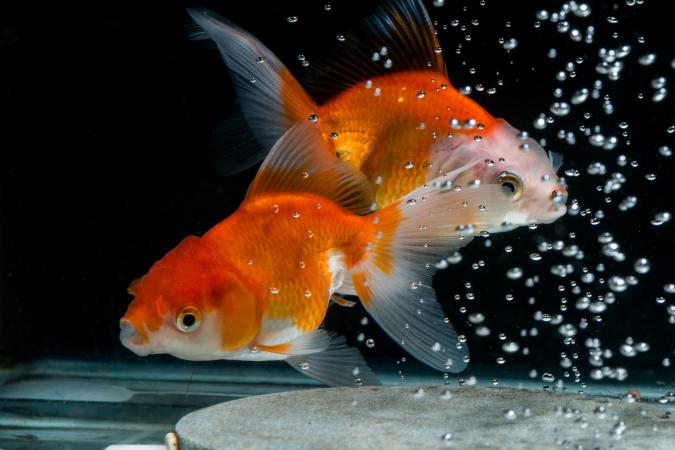 If you’ve included a pair of goldfish in your tank, you may want to know about these names that go well together.

Contrary to what you may have thought, goldfish are not always gold. While they are rare, there are some goldfish that contain the recessive gene that makes them an albino goldfish.

Albino goldfish are white but they are not the same as white goldfish. A white goldfish is the result of a lack of exposure to light.  These fish have pigment that reacts to light, and they lose their color over time because of that.

Whether you have an albino or white goldfish, these names may be suitable for your fish.

Goldie Hawn: If you want to name your pet fish after its aesthetics, you can’t go wrong with naming it after the glamorous 70s actress, dancer, and singer Goldie Hawn. 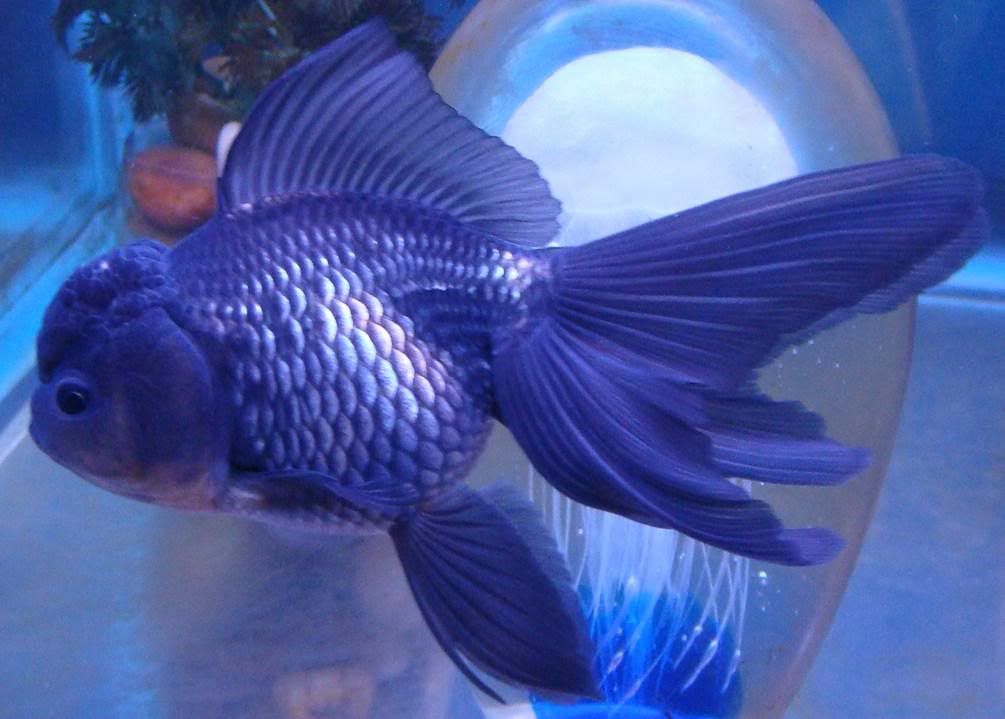 In some parts of China and Japan, you can find a type of goldfish called the Blue Oranda goldfish. That said, this beautiful fish can now be found in many parts of the world thanks to breeding programs.

The Blue Orandas have blue heads, tails and fins, and a silver body.

If you’re lucky enough to get such an amazing fish in your tank, you should give it a name to remember. Here are some blue goldfish names to help you out.

Dory: Dory is one of the main characters from the Pixar film Finding Nemo. While Dory may not be a goldfish, she is a blue fish that forgets things a lot.

Do you want to show off how clever and creative you are with your pet fish’s names? Well, here are some ideas for clever goldfish names.

Cleo: Cleo is a goldfish and a side character in the Disney animated film Pinocchio from the year 1940.

Cleo is the character Geppetto’s pet and is very affectionate toward him.  She also twirls and smiles at her pet owner to communicate with him.

If your goldfish looks happy when it sees you every day, then you’ve found the perfect name.

Harry Water: Harry Water is a silly name you could give to your pet goldfish.

As you must’ve guessed, it’s inspired by Harry Potter’s name (the boy wizard who defeated Voldemort in the Harry Potter film and novel series).

Harry Potter may not be dumb himself, but this name sure is—well, in a funny way.

Some of the best goldfish names are those that refer to their gorgeous golden and orange color.

Take a look at our favorites.

Lake Skywalker: Luke Skywalker is the protagonist of the original trilogy of the Star Wars films.

He was also the first Skywalker to be mentioned in the lore, the second, of course, being Anakin Skywalker, Luke’s father—but that was before we learned that Anakin is Darth Vader (spoiler alert).

Anyway, Lake Skywalker is a funny play on this character’s name that works for your freshwater pet fish.

If you don’t want to take the sci-fi route, check out these funny goldfish names instead. Some of them are also a play on celebrities’ and characters’ names.

There aren’t many famous goldfish in films, so this category contains names of many different types of fish from movies.

Goldfish Names That Start With G

If you plan on giving your goldfish a first and last name (with the last name being Goldfish), perhaps you should consider an alliteration. That is to say that its first name should also start with the letter G.

In our opinion, a good pet name is one that’s easy to say and hard to forget. So, here are some good goldfish names that’ll stick with you.

Many people are huge fans of Halloween. Many decorate their homes well before October 31st in anticipation of the spooky day. So, here’s a shoutout to all you Halloween nuts out there.

We’ve got a few Halloween goldfish names for you to pick for your pet during the season.

Small Fry: For those of you who are rather sarcastic and aren’t afraid of showing it, small fry is perfect for your huge goldfish.

Goldfish are generally small fish, growing to a maximum of about 6 inches in length when in captivity. However, they can grow up to 12 or 14 inches in the wild.

Moby Dick: Moby Dick was a sperm whale from the novel of the same name. This name is ironic because that whale was enormous, and your goldfish is a tiny swimmer.

There are a few popular goldfish in some Japanese Manga series. If you’re a fan of Japanese literature and TV, you may want to give this list of Japanese goldfish names a read.

There are a few varieties of long-bodied goldfish in the world. Some of these include the common goldfish, comet goldfish, and shubunkin (a goldfish with a calico pattern).

The Lion, the Witch, and the Goldfish: If you’ve got three pet goldfish, you’ve got this funny and cool trio of names. Just decide which name goes to which fish so that you don’t mix them up.

After going through this guide on cool and funny names for goldfish, you must have some semblance of what you should name your pet.

The best advice that we could give you is don’t overthink it. Just pick your favorite category and then go with a name that sounds the best to you, and that’s it.

How Big Do Goldfish Get?