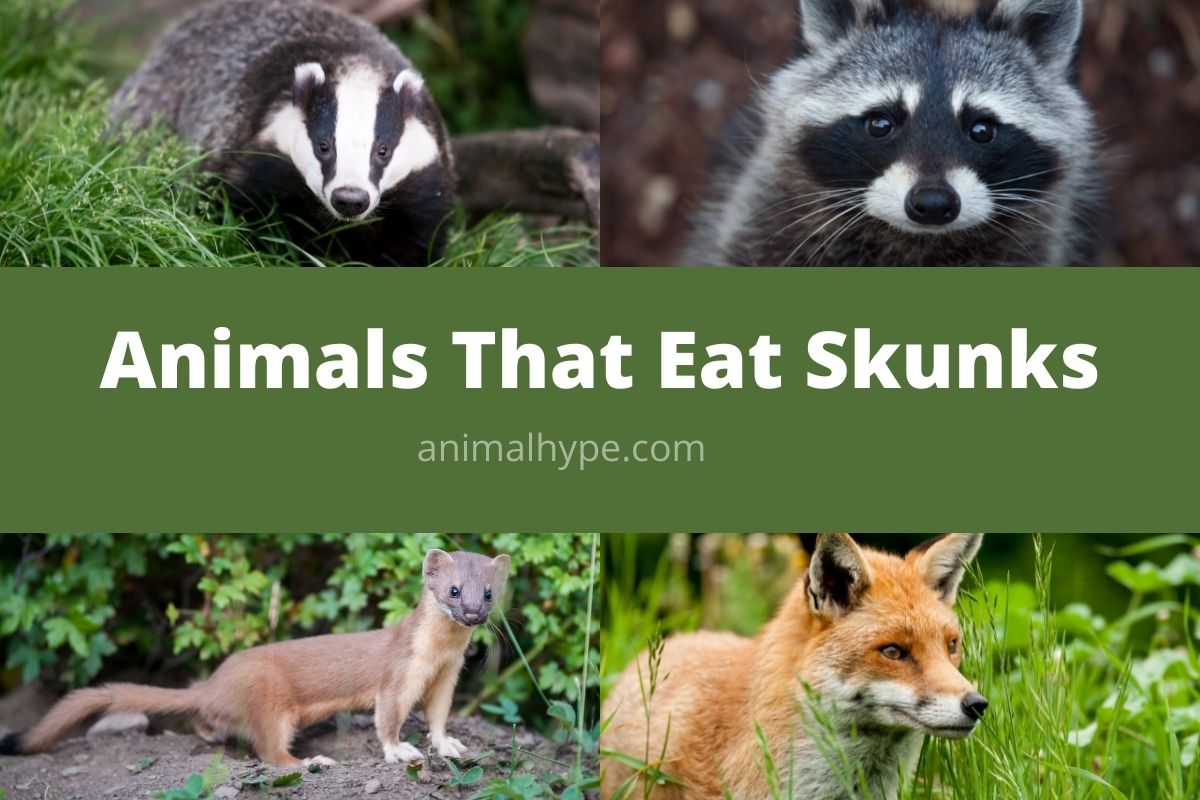 Since I was a kid, I wondered what could possibly eat a skunk. I know what you’re thinking — skunks don’t get eaten by anything they stink too bad! That may be the case, but that doesn’t mean they aren’t getting eaten by something…

What eats skunks? Great horned owls and red-tailed hawks are aerial predators of skunks. These birds will attack skunks from above. On the ground, skunks are preyed upon by mammals, particularly red foxes, civets, badgers, cougars, coyotes, bobcats, and domestic dogs.

Because skunks have a notorious tendency of using their foul-smelling spray to ward off their predators, there are not many predators in the animal kingdom that would hunt them actively. In fact, the research of Dr. Stanley Gehrt shows that 95% of skunk mortality is caused by factors other than predators.

Many mammals could be capable of eating skunks in a food scarcity but wouldn’t do so under ideal conditions. However, unfortunately for the skunks, their aerial predators are unaffected by their smell and would prey on them gladly.

Today, we will be listing down all the probable predators of skunks, both on land and in the sky.

Being the only extant member of the Puma genus, the Cougars are known by several names, such as “Panther,” “Catamount,” and “Mountain Lion.” These cats are the fourth-largest felids globally, after tigers, lions, and jaguars (second-largest in the New World).

With a skin color that ranges between tan and faded-brown, cougars have a slender body that is slightly less muscular than the jaguars.

They have a rounded head with erect ears and powerful neck and jaws. Their front feet are larger than the hind feet and have retractable claws to help them clutch their prey.

Among the sexes, the males are larger and heavier. Despite their substantial size, the cougars are not categorized under “big cats” due to their inability to roar.

Large mammals like deer are the ideal diet of the cougars. However, they will also prey on hares, beavers, raccoons, marmots, porcupines, mice, and livestock animals such as pigs, sheep, calves, and poultry.

The term “civet” describes several carnivorous mammal species found in Africa and Asia that belong to the Viverridae family. However, the main species this term is used for are the African Civets (Civettictis civetta), a large viverrid species endemic to the sub-Saharan regions of Africa.

The body of these civets is covered with coarse, wiry fur coats ranging from creamy yellow to reddish in color. Most of their upper body is covered with brownish-black spots, with similarly colored horizontal lines on their hind limbs and vertical ones on their forelimbs.

Their thick, bushy tail also has dark stripes running along its length. They have a small head with rounded ears and pointed muzzle. Their eyes are small, and across them stretches a black band, ending slightly above their nose.

The African Civets have a diverse diet which includes several rodents like the greater cane rats and Temminck’s mice, toads, herald snakes, common agamas, insects, and bird eggs. These civets are not beyond eating berries, seeds, and fruits either.

Found in the western, central, and eastern parts of the United States, the American Badgers are a North American badger species typically found in grasslands and prairie regions.

Although these badgers might seem similar in appearance to the European Badgers (Meles meles), the two are not closely related. There are 4 recognized subspecies of these badgers, out of which the Taxidea taxus taxus (found in the central United States and central Canada) are considered the nominated species.

The American Badgers have a conical head and bristled ears, with nictitating membranes in their eyes. They have a grizzled, coarse-haired fur coat on their body colored in brown, black, and white to provide them camouflage in their natural habitat.

Their body is stocky and low-slung, just like the other badger species, with powerful forelimbs and huge foreclaws, helping them in their fossorial activities.

Both sexes appear similar but are sexually dimorphic in their size, with the males being slightly larger than their female counterparts.

Named after their stubby, or bobbed, tail, the Bobcats are a North American feline species widely hunted for their fur and as a sport. These medium-sized cats belong to the Lynx genus, of which they’re the smallest members.

Bobcats have a small, rounded face wider due to the extended hair beneath their black-tipped and pointed ears. Their eyes are small and yellow, with black pupils and a pinkish-red nose. The color of their fur coat ranges between tan and greyish-brown, with dark streaks on the body and bars on their legs and tail.

Bobcats are great climbers, can swim when they have to, have a good sense of smell, sharp hearing, and vision; all these qualities make them excellent nocturnal hunters.

Not only are Red Foxes the largest members of the true fox genus (Vulpes), but they are also the most widespread fox species. These foxes can be found across North America, Asia, Europe, and parts of North Africa. Moreover, they are also included on the list of “World’s 100 worst invasive species”.

The red foxes have a short-limbed and elongated body with a remarkably long tail (about half as long as their entire body). It is their long, fluffy tail that is a major identifying feature of these foxes.

Just like the rest of their body, their head is long and narrow as well. The sexual dimorphism between these foxes is most prominent in the shape of their skulls; the females have a smaller skull but larger canines than their male counterparts.

Red foxes are omnivores, and their diverse diet is one of the main reasons behind their wide distribution. While their primary diet includes mostly rodents, porcupines, raccoons, skunks, reptiles, and insects are all part of their secondary diet.

Among plant materials, these foxes are quite fond of grapes, acorns, plums, apples, blueberries, and persimmons.

Also known by names like “Hoot Owl” and “Tiger Owl,” the Great Horned Owls are a large owl species endemic to the Americas. Due to their high adaptability, they are also the most widely distributed true owl species here.

The great horned owls have mottled brown upperparts and wings that bear complex markings, while their underparts are lighter in color with brown, horizontal barring. Their unique coloration is intended to provide them camouflage in the woods.

They also possess a white patch on their throat, the size of which can vary among their subspecies. Like several other owl species, great horned owls possess a facial disc, although its color might vary from grey to brown to reddish in different subspecies. Both their talons and bill are grey in color, with long feathers attached to their feet.

Among mammals, they prey on several species of opossums, shrews, armadillos, ferrets, minks, and bats. These owls have occasionally hunted foxes, raccoons, coyotes, and even bobcats.

Because these owls are immune to the foul-smelling spray of the skunks, they’re known to prey on all 6 species of skunks found in North America.

Also called “Red-tail” for short, the Red-tailed Hawks are a bird of prey species with a flexible habitat.

These hawks can be found in grasslands, deserts, agricultural fields, deciduous and coniferous forests, and urban areas. In the United States, they’re commonly referred to as “Chickenhawks.”

There are 14 subspecies of the red-tailed hawks, all of which have varying coloration and geographical ranges. However, the tail of most adult subspecies is brick-red in color, which lends them their name. They display sexual dimorphism in size, with the females weighing 25% heavier than their male counterparts.

Like the great horned owls, the red-tails hawks also have diverse diets ranging from birds and mammals to reptiles. The mammals commonly preyed upon by them are rodents like mice, voles, woodrats, gophers, squirrels and deer mice, rabbits and hares, shrews, foxes, skunks, raccoons, and foxes.

At this point, I have a sneaking suspicion that you’ve forgotten entirely what the original question is. That’s totally understandable.

There was a lot of information crammed into this article. Our little skunk friend got quite a workout between all the waddling, investigation, scent spraying, and running away.

We’ve eaten our way through this smelly subject, but don’t worry – we didn’t keep anything on – and we’re all still alive!

We hope you enjoyed everything in our comprehensive guide about skunk predators. Make sure to share it with your friends and family on social media!

Thanks again for reading! Until next time!

How Does a Skunk Spray?