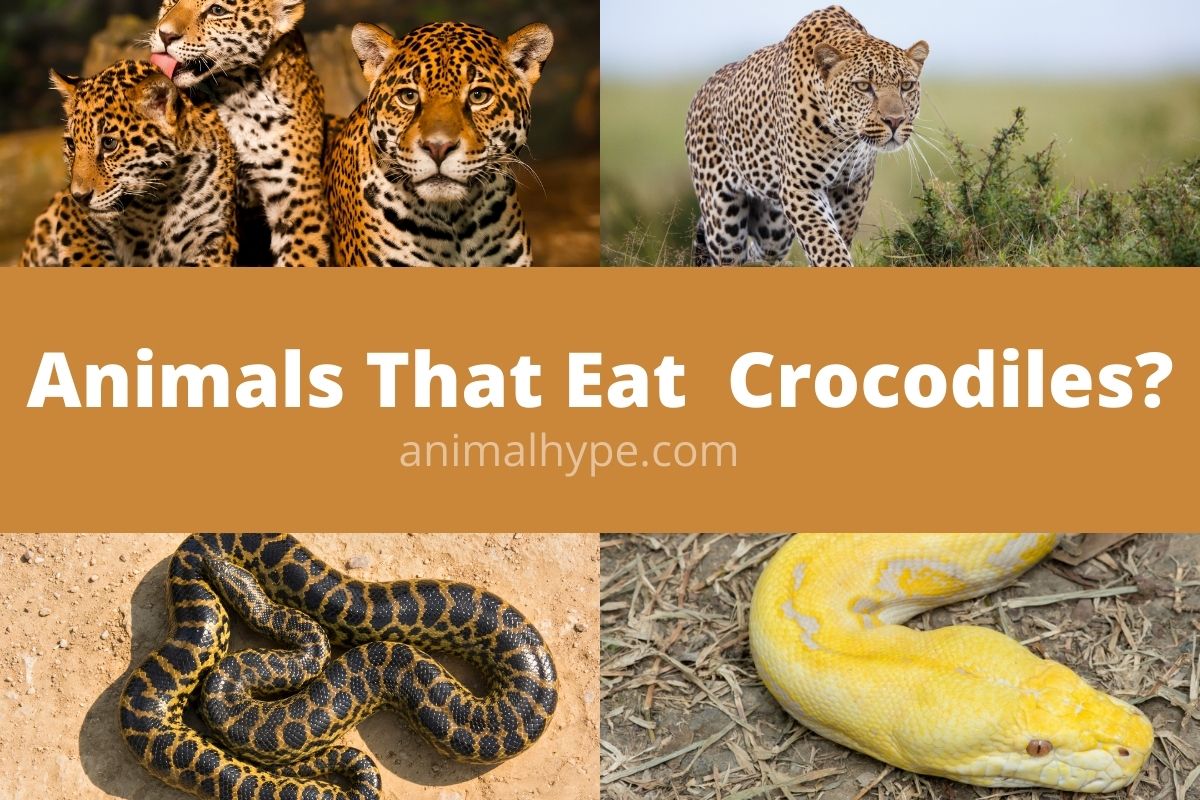 Have you ever wondered what eats crocodiles? It’s a crazy question. I don’t know if anyone has ever really cared about it, but it’s a conversation starter and always seems to trigger an interesting response from people. Maybe it’s because crocodiles are so big and scary looking or because people have seen Crocodile Dundee II too many times.

While crocodiles are not a part of any animal’s primary diet, some occasionally attack these reptiles. Several big cats, like leopards, jaguars, tigers, and lions, are known to prey on crocodiles on rare occasions. Even large reptilians such as anacondas and pythons have also been seen attacking them.

Although crocodiles are one of the world’s ancient and most lethal reptiles, with one species being apex predators (Saltwater Crocodiles), they’re not without enemies.

This article will list down all the animals that can attack the crocodiles and potentially kill them. Further, we’ll also learn about those that are a threat to the lives of their younger ones.

Mammals that Prey on Crocodiles

Due to the thick skin and well-armored bodies of the crocodiles, it is difficult to imagine how any mammal would have a chance of injuring them, much less actually killing them.

But we’re probably underestimating the strength and ferocity of the big felines.

Let’s take a look at all the big cats that have had violent encounters with these reptiles:

Being the only member of their genus endemic to the Americas, the Jaguars are the largest big cat species of the Americas (third largest in the world).

These muscular animals have a fur coat that ranges from pale-yellow to tan in color, with dark, rose-like markings (rosettes) scattered all over them. In contrast, the ventral parts of their body are unmarked and plain white in color.

The powerful bite of the jaguars makes them such formidable hunters; they usually bite directly on the skull of their prey to fatally damage their brain. Studies have shown that their bite force can even pierce the shells of turtles and tortoises.

Giant Anteaters, Capybaras, and Marsh Deer are some of their significant prey. In the floodplain habitats, jaguars are also known to attack Caimans and Turtles.

Although the events of jaguars attacking fully-grown crocodiles are sporadic, they can kill these reptiles. In fact, among all the felids, jaguars are their most lethal enemies. They use their sharp teeth and powerful bite force to puncture their body.

Although lions belong to the same genus as the jaguars, they’re larger than the latter. Lions have a short head, a deep-chested body, and a long tail with a hairy tuft at its end.

Being sexually dimorphic mammals, the males are larger than their female counterparts and possess a prominent mane around their head, which is absent in the latter.

Lions are generalist hypercarnivores and apex predators, which means that they have no natural predators in the wild.

While their diet may vary according to their geographical location and surroundings, animals like Giraffe, Blue Wildebeest, Gemsbok, Zebras, and African Buffaloes are their most preferred prey.

As far as crocodiles are concerned, lions would usually leave them alone to avoid going through the trouble of killing them and risk injury. However, a conflict over prey is what usually instigates a fight between the two.

If a crocodile and lion are engaged in the fight, it is difficult to say who would win; both predators are powerful and lethal, and either could win. There have been instances when lions have achieved victory over these reptiles.

Usually occurring in sub-Saharan Africa, some parts of European Russia, and Central and Western parts of Asia, the Leopards are another felid species belonging to the Panthera genus.

These wild cats have a longer body and shorter legs than the other members of their genus, with a big skull. Their tan fur is marked with rosette just like the Jaguars; however, the rosettes on their fur coat are comparatively smaller in size.

Being primarily nocturnal hunters, the leopards heavily depend on their sense of vision and hearing for hunting.

Although they mostly hunt on the ground, the Serengeti leopards have also been known to ambush their prey by jumping on them from the trees. Impalas, Bush Duikers, Chital Deer, and Cape Bushbucks are some of their primary prey.

Among the crocodilians, the Caimans are an easier and more common target of the Leopards than the crocodiles. However, if a leopard manages to grab ahold of the crocodile’s neck using its jaws, it might be successful in suffocating them to death.

Tigers are the largest members of both their genus and the feline family and can grow to the length of over 12 feet. These territorial felids have an orangish-brown fur with paler undersides, covered with dark, vertical stripes.

Being apex predators like the lions, these big cats commonly feed on Elks, Wild Boars, Sambar Deer, Indian Bison, and Swamp Deer. Other than these mammals, tigers are also known to prey on other significant predators (both for food and to eliminate the competition), such as leopards, bears, pythons, and crocodiles.

When attacking large prey like crocodiles, the tigers usually hold them down with their strong limbs while biting their throat. Tigers are far too powerful for the crocodiles and almost always win against them on land. However, sometimes, an injured crocodile might slip back into the water to save its life.

Reptiles that Prey on Crocodiles

While crocodiles are far too dangerous for the other crocodilians (Caimans, Gharials, and Alligators) to attempt to attack them, other reptiles are not afraid of them.

Let’s take a look at these formidable species:

The term “anaconda” describes a group of large water boas belonging to the Eunectes genus.

However here, we’re going to talk about the Common Anaconda, which is the longest in its genus and the heaviest extant snake species in the world. Like the other members of their genus, these snakes are non-venomous and use the method of constriction to kill their prey.

The Common Anacondas are sexually dimorphic, with the females being much longer in length than their male counterparts.

These snakes are primarily aquatic, but they have a diverse diet that consists of anything they can overpower. Some of their common victims are Caimans, Capybara, Tapis, Deer, and various fish and other reptiles.

Although the anaconda can eat a fully-grown crocodile, it would be a long and tiresome process for them. Because the crocodiles will certainly try their best to resist these snakes, it can even take up to 5 hours for the anacondas to completely swallow them.

Like the anacondas, the pythons are also a family of non-venomous snakes found in Asia, Australia, and Africa. 42 recognized species in the Pythonidae family are divided into 10 different genera.

While the pythons are not endemic to the United States, the Burmese Pythons (Python bivittatus) have been introduced and are considered invasive species.

The pythons possess 6 rows of sharp teeth in their jaws curved backward, which grab their prey. Once their prey is within their firm grasp, they constrict them and wrap themselves around their body in coils. During this process, their prey dies due to cardiac failure, after which they swallow them.

Most pythons are ambush predators commonly fed on Wallabies, Antelopes, Deer, Monkeys, and Pigs. Rodents, birds, and lizards are consumed by these snakes as well.

Although the pythons have been engaged in conflict with the crocodiles before, the chances of either winning are 50-50. Most species of pythons usually leave crocodiles alone for fear of injury.

While there are only a few animals that would dare to prey on the crocodiles, their younger ones are seen as food by many, including birds and mammals.

Below, we will discuss some animals that are the common predators of baby crocodiles.

Eagles are a family of large carnivore birds belonging to the family of the raptors, consisting of about 60 recognized species.

These birds are not really grouped based on their biological similarities but simply by the fact that they’re all large enough to be able to prey on a significantly large vertebrate.

Although the diet of these birds of prey differs with different species and their geographical locations, many large eagle species hunt baby crocodiles. The Golden Eagles (Aquila chrysaetos) are one such eagle species.

As the name suggests, Great Blue Herons are among the largest herons that commonly inhabit the wetlands and open water shores in the Americas. In North America, they’re the largest heron species.

Although the Great Blue Herons are known to feed on fish, ducklings, shrimps, and rodents primarily, there have been instances when they have swallowed baby crocodiles and alligators whole.

Also referred to as “Wild Swine,” the Wild Boars are a species of endemic boars to parts of North Africa and Eurasia.

These boars have a large head (taking up one-third of their entire body length) and a massively built body supported by relatively thin legs.

They’re omnivores with a flexible diet, including nuts, seeds, leaves, barks, insects, fish, rodents, snakes, lizards, and frogs. Although baby crocodiles are not a part of their diet, they have been known to kill and eat them on rare occasions.

Crocodiles are large reptiles that live in tropical or subtropical regions throughout the world. They are well adapted to their habitats, and they require much warmer temperatures in order to survive. The largest crocodile species can grow up to 20 feet long, but most reach a length of 6 -16 feet.

And here we are at the end of the article! I hope you found it useful. If you did, help spread the word by sharing it on Facebook and Twitter. We’d really appreciate it!

In the meantime, we recommend checking out some of our other articles! 🙂

Do Crocodiles Have Tongues?