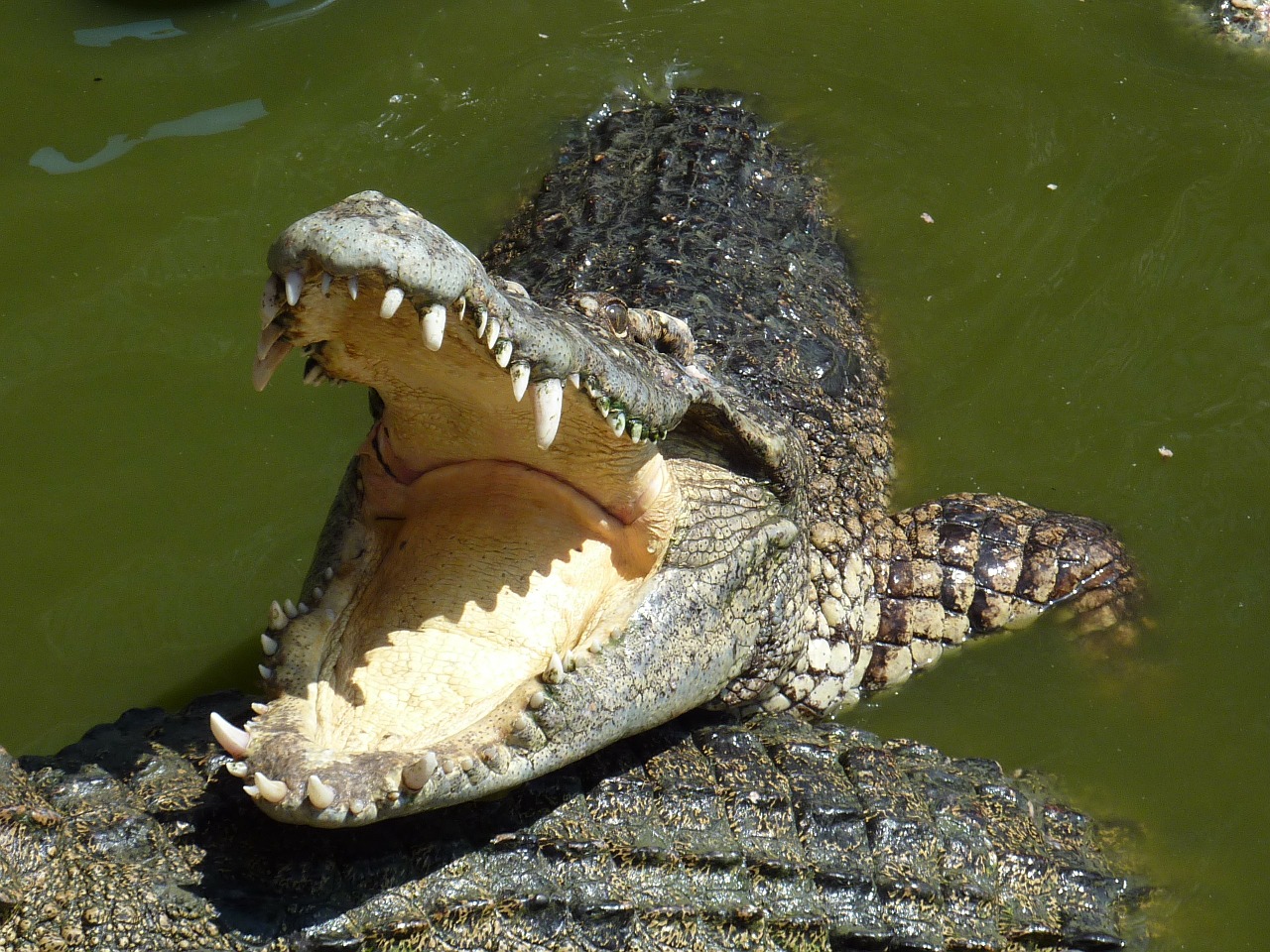 Crocodiles are reptiles that belong to the category of Apex predators that are placed on top of the food chain. They are ferocious creatures known for their powerful bite & slash, agility, and their rugged appearance. Among the many distinctive features of a crocodile, their powerful jaws draw in more attention and so does their big mouth.

The way these majestic creatures lay on the shores of water bodies with their mouth wide open is truly a sight to behold. The one thing that intrigues most people is whether crocodiles have a tongue or not.

So, do crocodiles have tongues? Crocodiles do have a tongue like other species but their tongue isn’t as free to move like them. In fact, it is the presence of this tongue and its functionalities that differentiates a crocodile from an alligator. Unlike alligators, crocodiles do not use their tongue to swallow food rather they use it for salt regulation and body heat regulation.

An important thing to be noted about the tongue of a crocodile is that its tongues don’t play a part in the feeding process. So what is the tongue used for? How do crocodiles eat without an immobile tongue?

In this article, we will have a sneak peek at the tongue of a crocodile, its functionalities
and find answers to these questions.

How do crocodiles swallow their food with an immobile tongue?

The crocodile’s tongue is attached to the bottom of its mouth by a membrane and the only way that a crocodile can move its tongue is by pushing it back and forth, to block its throat (airway).

Crocodiles have really powerful jaws and 24 razor-sharp teeth. A crocodile can supposedly generate 3,700 pounds per square inch or 16,460 Newton, of bite force. That’s about 3 to 4 times more force than what lions and tigers generate.

In the wild, crocodiles patiently wait hidden for their prey in the calm waters. When the unsuspected prey comes in the striking range crocodiles will clamp down on them with their massive jaws and land a deadly bite.

Croc’s after landing this deadly bite will land some more bites to crush its prey evenly and swallow it as a whole. They can’t chew or break off small pieces of food like other animals.

Be very clear that the croc’s do not chew its prey rather they crush its prey with their razor-sharp teeth and powerful jaws. Since they do not chew their food or mix them with saliva in their mouth they don’t need a tongue in the process of feeding.

If they don’t need their tongue to swallow food, then what do they use it for?

Crocodile’s mainly need their tongue for

Let’s have a look at these three functionalities of their tongue.

Keeping water out of the airway while underwater

Crocodiles need to come out of the water to breathe and which means they need to protect their lungs by blocking the airway to ensure that water does not get into the lungs or the airway while they are underwater.

It is for this reason their tongue is attached to the roof of the mouth by a membrane. The tongue helps keep the throat closed, preventing water from entering the animal’s airway or lungs while it is underwater.

How do they do it?

To make things clear let’s try an experiment. Open your mouth and try breathing through your nose. You will notice that in order to breathe through your nose your tongue automatically blocks your throat. Similarly, when crocs are underwater they push their tongue to their throats and protect their airway.

How long can crocodiles remain underwater?

If not active crocs can stay underwater for a staggering 2 hours and when active they can spend almost up to an hour underwater.

A tiny fragment of the animal’s hemoglobin is the reason for this unique ability. Crocs have a unique ability to use the bicarbonates that are formed as a byproduct of cells using oxygen and releasing carbon dioxide (metabolic process).

These special tiny fragments of the animal’s hemoglobin are capable of unloading oxygen only to cells that produce excess bicarbonates. This means only those cells that are active are supplied with more oxygen and not supplied to their entire body.

This is, in fact, the major difference between an alligator and a crocodile. Crocodiles have salt glands present in the posterior part of their tongue. Salt glands in crocs are actually salivary glands that are modified and functions as an exocrine gland secreting salt. It is for this reason crocodiles are found to survive in saltwater where alligators don’t.

How do they do it?

A deeper study of this matter is beyond the scope of this article and we shall have a broader look at this. Living in saltwater isn’t as easy as living in freshwater when considering maintaining the ionic concentration in their body fluids.

The salt glands present in the crocodile’s tongue is a modified salivary gland that has tubular lobes which secrete salts. These Lobes consist of a number of short, blind-ending secretory tubules which join together to form multiple interlobular ducts.

There are also numerous capillaries, arterioles, and venules running through the connective tissue between these lobular ducts. These arterioles, venules & capillaries are responsible to carry these salt from the salt glands to the cells of a croc’s body to maintain the ionic concentration for osmoregulation.

Unlike mammals and birds, crocodiles are cold-blooded species. This means they cannot maintain their required body temperature by physiological means rather they need to depend on behavioral body temperature regulation methods.

Crocs generally prefer maintaining their body temperature between 30 to 33 Degree Celsius. In order to maintain this body temperature, they move and forth between warm and cool parts of their immediate environment.

It for this reason crocodiles are often found floating in water or basking under the hot sun with their mouth wide open. When basking in the open, crocodiles are found to align their body in such a way that their body receives maximum heat from the sun while their head doesn’t uptake much heat.

When basking crocs also ensure that they allow their brain to cool by the method of evaporative cooling by sweating through their tongue. This is done simultaneously when the body rapidly gains heat.

This behavioral body temperature regulation mechanism is, in fact, the reason why crocodiles are not commonly seen in cold areas.

An interesting thing to be noted about crocodiles is that basking in the sun with mouth wide open is not always done to cool their brain. Rather crocs are commonly seen lying on land in the rain or at night with their mouth wide open.

This indicates that keeping their mouth open is actually its behavioral pattern too.

You might have heard of the phrase crocodile tears but did you know that they really do cry?
Yeah, crocodiles do shed tears when they are on dry land or while they eat prey. Of course, they aren’t lamenting for eating a poor animal.

Why do they shed tears then?

Before we proceed further you need to be clear of the fact that crocodiles do not cry, they only shed tears. There are 2 main reasons for crocodiles shedding tears

Reason 1 – To keep their eyes lubricated when on land: Crocodiles spend most of the time in the water which means their eyes are always lubricated.

When these crocs come out to the land to bask under the sun their eyes tend to get dry because of the air surrounding it. This triggers the tear glands in their eyes and crocs start shedding tears and keep their eyes lubricated at all times.

Reason 2 – To expel excess salt content in their body: As discussed in the earlier sections, it is very important for the crocs to maintain an optimum concentration of ions in their body fluids to avoid an imbalance in ionic concentration when compared to their outside environment.

Sometimes, when crocs eat or when the food they have eaten digests there tends to be an increase in the ionic concentration of their body fluids.

This triggers their tear glands and by shedding tears they regulate this surge in ionic concentration in their body fluids and maintains an isotonic environment.

Check out, our article on Cute and Funny Crocodile Names.