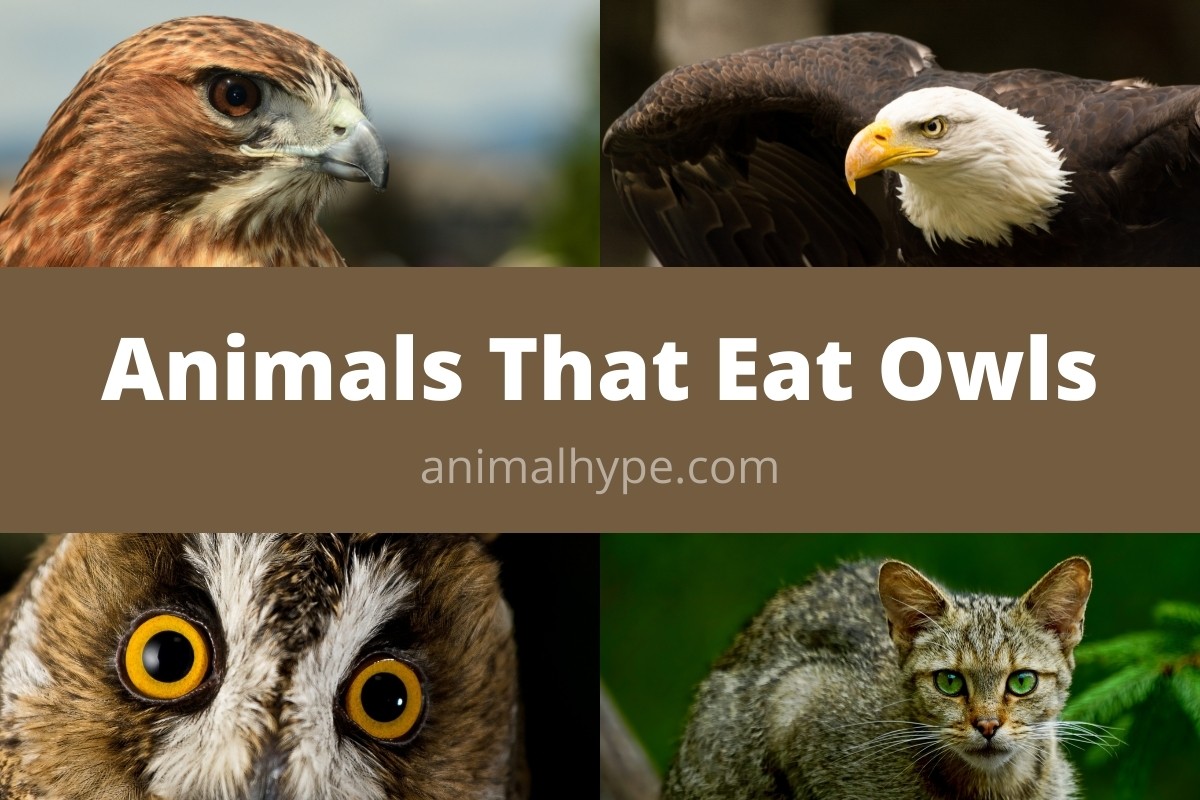 Whether you are curious about what kind of birds eat owls or what animals eat owls, we have answers you may find interesting. Most people believe that because they are nocturnal animals they do not have many natural predators. However, these amazing birds do have a few enemies in the wild. Take a look at these animals that eat owls; you will be surprised to see how many animals in the wild are a threat to owl life.

Since owls belong to the family of raptors, with some being apex predators, there are very few animal kingdom members that would risk preying on them. In the avian world, only the larger, and deadlier birds of prey, such as hawks and eagles, dare to prey on owls; not to forget some larger owl species that prey on other, smaller owls. When owls are young, or they’ve been injured, foraging predators would take them on.

In this article, we will talk about the birds that prey on owls, including the larger owl species that practice cannibalism. We’ll also explore the threats that a young or injured owl might face in the wild. Lastly, we’ll learn how humans are the biggest threat to the existence of these raptors.

Birds that prey on owls

Because the owls themselves are birds of prey, only the other birds of prey can harm them in any way; other bird species do not even come close and would end up becoming their food if they tried messing with them. But does that mean that all raptors can prey on owls and kill them? Not really.

Even within the family of raptors, owls are quite formidable; some raptors would simply avoid any kind of conflict with them, while others, being pure scavengers like the vultures, cannot eat owls when they’re alive. In the end, there are only two groups of raptors that can prey on owls:

Hawks belong to the family of Accipitridae, which also consists of other raptors like old world vultures, harriers, and kites. These medium-sized raptors can further be divided into 2 different groups: the Accipiter group and the Buteo groups.

The Accipitrine hawks have a long tail, mostly inhabit woodlands, and are known to attack their prey suddenly after keeping an eye on them for a long time. On the other hand, the Buteo hawks or “hawk-buzzards” have a shorter tail but broader wings; they’re also built more sturdily than the Accipitrine hawks.

There are over 200 hawk species in the world; some of the common hawk species you can find in North America are:

While hawks can easily prey on the smaller owl species such as the Saw-whet Owls (Aegolius acadicus), if they try to do so with other, larger owl species, they could end up being injured as well. However, hawks usually don’t view owls as a food source.

If a hawk and an owl are engaged in a conflict, it will most likely be over their hunting territories. And even then, the hawks often back off and look for a different territory in most cases. On the occasions that the two raptors fight, the fight might last until death, and if the owl loses, it ends up being food to the hawks. 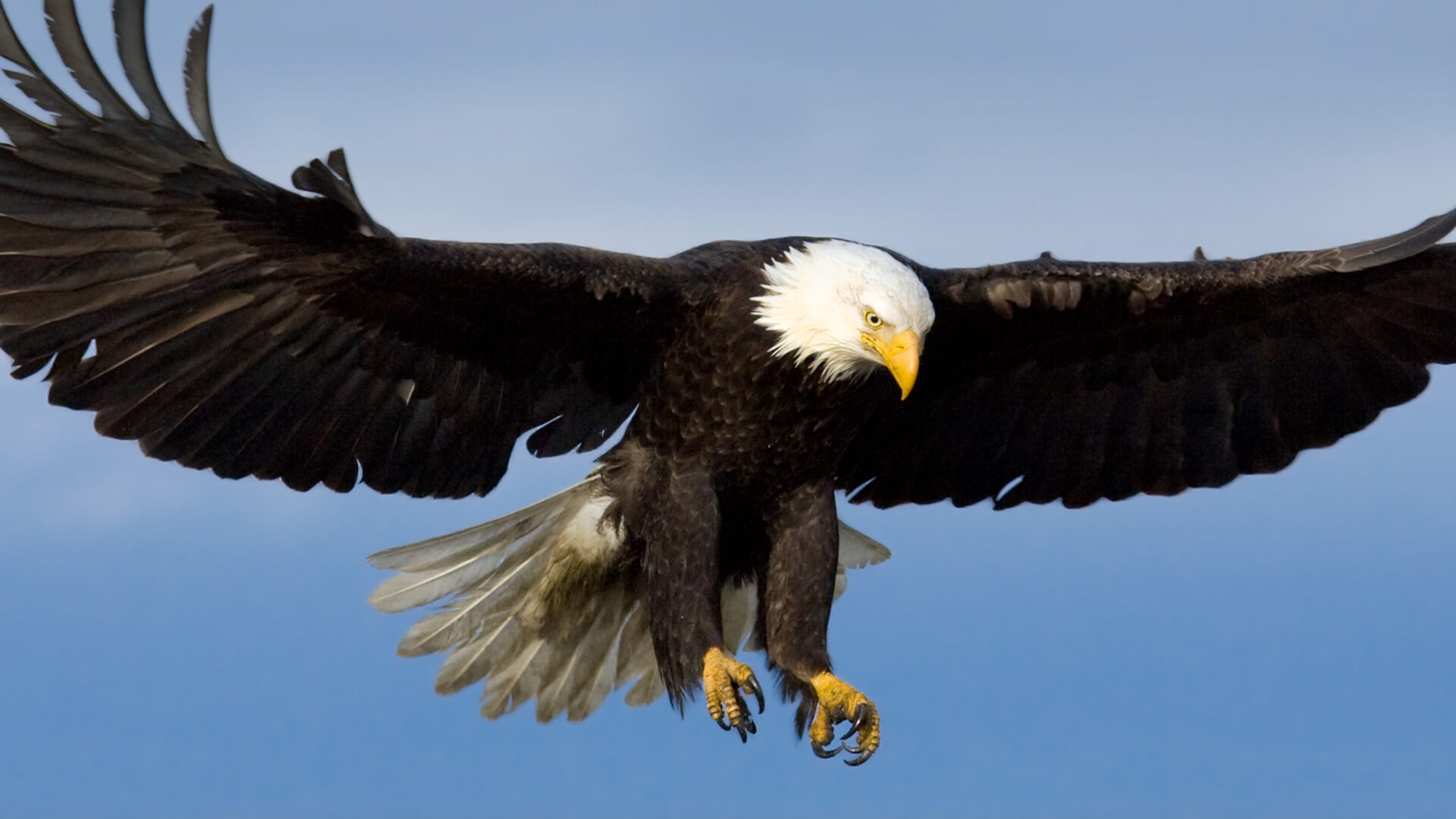 Eagles belong to the same family as the hawks and inhabit the same regions as them (forests, meadows, grasslands, sea coasts, deserts, suburban and urban areas). Both of these raptors are also diurnal, actively hunting during the day. But that’s where all their similarities end.

Unlike the large family of hawks, the eagles have only 60 recognized species in the world. Moreover, they’re larger, heavier, and stronger than the hawks because of their muscular built and well-developed hind talons that enable them to carry larger prey.

You can easily see the difference between their strength from their common prey; while eagles hunt on snakes, medium-sized mammals, and other birds, hawks’ diet mostly consists of rodents, rabbits, and large insects. Only two eagle species are found in North America:

When it comes to owls, you’d think that eagles, that are much larger than owls, would have no problem preying on them. However, eagles do not really consider owls to be their prey. It is the owls that have been seen attacking eagles occasionally.

Truth be told, owls do have an edge over the eagles. While they’re not as big, they’re well-protected because of their camouflage, and can fly much more silently than the eagles; these qualities make the owls practically undetectable to them until it is too late.

The main conflict between eagles and owls is over their nesting places. And while eagles can easily defeat the smaller owl species, the Great Horned Owls (Bubo Virginianus) could be considered a fair match against them. If they were to fight to the death, both birds would have more or less the same chances of winning or losing.

Owls that eat other owls

While the idea of cannibalism is terrifying among humans, in the owl community, it is a common affair. The Great Horned Owl (Bubo virginianus) and the Snowy Owls (Bubo scandiacus) are two of the largest North American owl species. And while the Snowy Owls prey only on the Short-eared Owls (Asio flammeus), the list of owls that fall prey to the Great Horned Owls is quite long. They are known to feed on the following owl species:

And these two are not the only cannibalistic owl species. The Saw-whet Owl (Aegolius acadicus), a moderate-sized owl species, has also been found to hunt and feed on several species of Pygmy Owls (Claucidium). Moreover, the Northern Hawk Owls (Surnia ulula) are also predators of the Tengmalm’s or Boreal Owls (Aegolius funereus).

The vulnerability of owl eggs, juvenile and injured owls in the wild

While the fully-grown adult owls are ferocious, can the same be said about their eggs and babies? Not really. Although the adult owls protect their younger ones and eggs fiercely, the owlets and the eggs are as defenseless as those of any other bird in their absence.

When the parent owls fly out to hunt, their younger ones are vulnerable to several foraging predators such as skunks, weasels, raccoons, prowling cats, opossums, foxes, and so on. And these mammals are not the only threat to the eggs of owls; there are many bird species out there that can feed on these eggs as well, the corvid family being an example of it.

Moreover, if an owl has been severely injured and faces difficulty in flying or defending itself, many animals would attack them, tear them apart, and feed on them.

Humans: the most lethal enemies of owls

I believe that I’m speaking for all of us here when I say that humans eating owls is highly unheard of. But if we are not eating owls, why are we being called the most lethal enemies of these raptors?

Although we don’t hunt the owls actively to feed on them or for any other reason, what we’re doing to their community is much worse than any of their predators and could even lead to their extinction in the long run.

We’re destroying their natural habitat; the large-scale expansion of the human population gives way to urbanization, which means more and more forests will be cleared, depriving the owls of their homes.

In addition to urbanization, there are other threats that owls face from us and our civilization. Some of you might not know this, but although owls have excellent vision, they’re incapable of seeing glass, which is why window collision is one of the leading causes of owl injury.

Moreover, if the owls are hunting near roadways, they can even get hit by automobiles. Some studies have also shown that the traffic noise interferes with the owls’ breeding patterns, reducing their breeding variations significantly.

If you enjoyed reading the blog post on animals that eat owls or would like to learn more about other animals, make sure you check out our website. We have hundreds of blog articles on owls, predators, and much more.