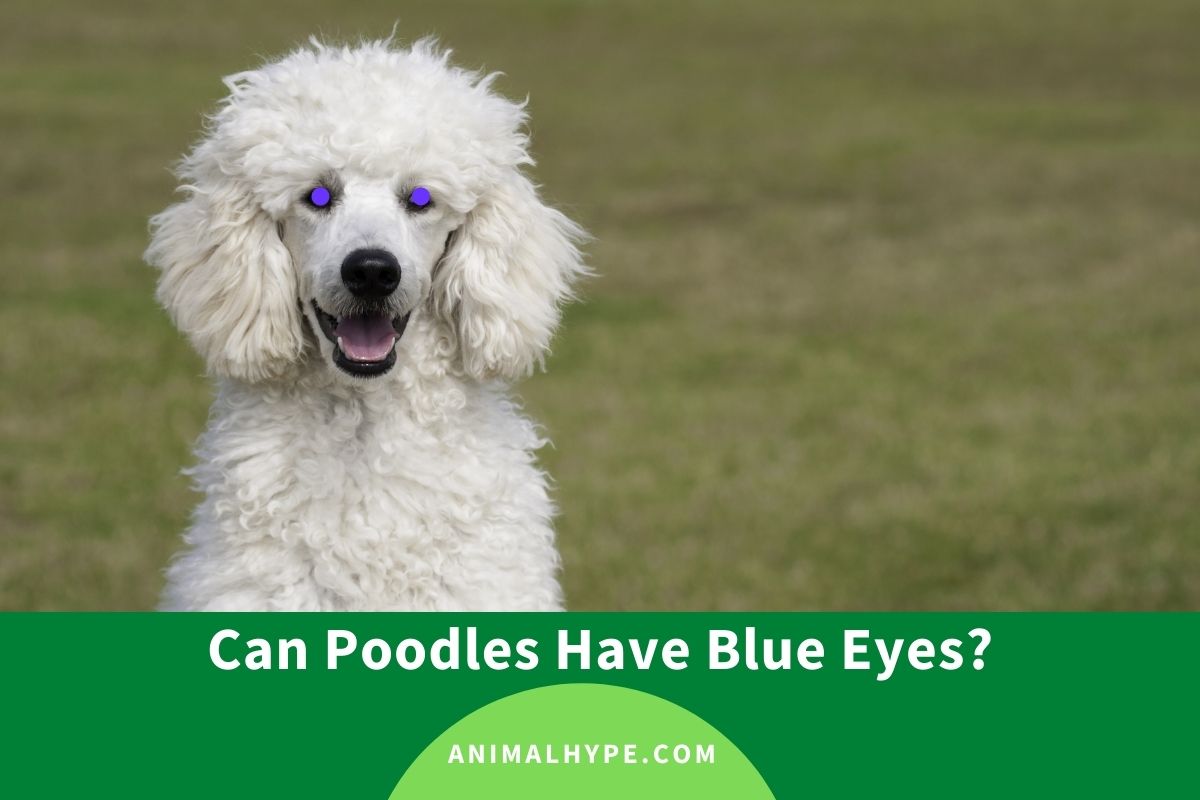 Poodles are little bundles of joy that we’re used to seeing zipping around our homes. Poodles are becoming exceedingly popular as a designer dog breed for households, and with good reason! The dogs are loyal, fun, and extremely cute! This is going to be a short post on the topic ‘Can poodles have blue eyes?’ to satisfy my own curiosity as well as other people who may wonder the same thing.

So, can Poodles have blue eyes? The simple answer is yes. Poodles can naturally have blue eyes, but this is not the standard for the breed. Blue eyes can often be a sign of something that is wrong with the dog in question rather than a fancy mutation. Especially when they’re older, Poodles’ eyes are likely to turn blue when they are very sick.

To fully understand when and why poodles have blue eyes, let’s take a look at a few need-to-know facts!

What do you need to know about Poodles with blue eyes?

Blue eyes are extremely pretty on a dog like a husky. They’re a sign of beauty and grace. Huskies with heterochromia are coveted! But that’s not the case with Poodles.

Here are a few things you need to know when faced with a blue-eyed Poodle.

Blue eyes are the clue to such kinds of breeding. A poodle with blue eyes probably has some issues, like eye disease, that is making their eyes that color. So, when picking up your puppy, take a look into its eyes!

The merle gene is responsible for our beautifully marked pets. For someone just looking for a family pet, the merle gene changing the fur pattern isn’t a deal-breaker. The problems associated with the gene, however, might just be.

The gene is commonly associated with deafness, blindness, and physical deformities. Especially those with a ‘double-merle’ gene have high rates of deafness and blindness!

Blue eyes and a pretty coat are the first indicators of such a gene. Looking into the bloodline is the best way to understand what kind of issues your pup might have!

If you’re looking for a Poodle to breed and show, then take a good look at its eyes before you get a pup. The industry standard for such breeds involves having dark eyes – black and dark brown are the norm. Blue-eyed poodles are a no-go from the beginning if you’re looking into entering the pup into competitions and such.

What does it mean if a Poodle has blue eyes?

So, what does it finally mean for a Poodle to have blue eyes? Well, this depends on their bloodline, breeder, and breeding circumstances. Here are three points you can definitively state when a Poodle has blue eyes.

It is not the norm

There is an industry-standard for any dog breed. Poodles, especially being designer breeds, are extremely regulated for competitions. There are rules about the coloring of the dog that needs to be adhered to before they can start competing. Blue eyes do not fit this norm.

Even if the dog is completely okay and the blue eyes and a family trait, chances are it will not be allowed to participate because of the deviation from the norm. The industry states that Poodles with blue eyes are uncommon and, therefore, not a part of the competition.

Eye color can be affected by the color of the coat

Most importantly, blue eyes can be a sign of health issues in Poodles. This is especially true if the eyes of the dog turn blue when they are older! It can be a sign of eye disease or something equally as bad that shows the pup needs medical attention.

Blue-eyed pups can be those with a merle gene and still require medical attention. They have higher chances of being born deaf, blind, or with deformities. It all depends on the breeder and breeding situation!

What are the risks involved with Poodles with Blue Eyes?

At several points in this article, we’ve mentioned that eye diseases can be recognized easily because of blue eyes. This can be because of the merle gene causing blindness in the pup. While it is a possibility, it isn’t a given.

If your industry-standard dog with dark eyes suddenly develops heterochromia, it is definitely a sign of a deeper issue. Be on the lookout for cataracts or glaucoma, both of which are quite common and lead to worse!

Breeding becomes a big issue for pups with blue eyes. The eyes are a possible sign of merle genetics, which we’ve talked about earlier in this article. Merle genetics cause the pretty patterns we love so much in our pups.

Merle genetics need to be introduced into the breed from an outside source. They often produce gorgeous puppies but come with the risk of deafness and blindness. This is especially true of a ‘double-merle’ litter.

If you have a merle Poodle, you can’t let it mate with another merle pup. These double-merle litters have extremely high instances of deafness, blindness, and physical deformities. If you’re at all humane, you’re not going to allow such a litter to be born or even created.

What does Heterochromia in Poodles indicate?

We all love a dog with some rare features, and heterochromia is one of them. While we’re on the topic of poodles with blue eyes, it is only fair to talk about heterochromia as well. Although it is rare, there is always a chance it could occur.

Before we get into the details of heterochromia, it is important to know what the condition is. You’ve probably seen it in humans, but more often in cats and dogs. The condition makes it so that the two eyes are differently colored. The most well-known example is the huskies.

But, it isn’t as simple as it seems. Heterochromia isn’t always a harmless mutation; often, it can be a sign of something worse, just like blue eyes! There are several different reasons a Poodle can have or develop heterochromia, including inflammation, medication, and brain tumors.

When is Heterochromia dangerous?

Heterochromia isn’t always a pretty sight. The best way to tell when heterochromia is dangerous is when it develops later on, especially in older dogs.

If the heterochromia isn’t genetic, then it is definitely dangerous. Some of the most common problems that come with a change in eye color include:

How do you care for a Poodle with Heterochromia?

Whether it is blue eyes or just one blue eye, eyecare is a necessary precaution for poodles. In general, taking care of your pet’s eyes is a good habit. It prevents premature diseases and allows you to catch any issues faster. If your pet has hurt their eyes, causing heterochromia or blue eyes to develop, then these are some steps you can take!

If you find that your precious Poodle has an injury that needs to be protected, then doggie goggles are the way to go! They prevent any additional injuries, dust, and foreign objects from entering the eyes. It also protects them from harsh sun rays! Not only will your Poodle look adorable, but they’ll be protected too!

You can purchase some medicinal or non-medicinal wet wipes to clean up the eye of any eye infections. Using a wipe instead of cloth helps contain the infection since the wipes are cleaner. It saves you from having to clean out any clothes!

If your Poodle is experiencing issues with their eye or eye injury, then you can ask your vet for an ointment to help them out. An ointment will help the eyes be fresher, and the infection or injury settle down faster.

If you find that your Poodle lacks nutrients and experiences trouble with their eyesight, you can provide them with supplements! Always make sure your vet approves of any such additions to your pups’ diet.

Can my Poodle breed? If your Poodle is a merle Poodle, you cannot allow it to breed with another merle Poodle. This is extremely irresponsible and produces litter with high chances of physical deformities. Otherwise, your pup is good to breed!

How do I determine whether my Poodle has the Merle gene? A poodle with unique markings in its fur or one that has been born with blue eyes is likely to have the merle gene. If you’re looking for an expert opinion, you can contact a veterinarian in your area.

To quickly answer the question once more, Poodles can have blue eyes. There are a number of reasons they could have blue eyes, ranging from family genetics to glaucomas.

Poodles with blue eyes are far and few; they’re stunning dogs that will love you unconditionally. While there are definitely some issues with Poodles having blue eyes, it shouldn’t be a complete deal-breaker that stops you from giving a deserving dog-loving home!