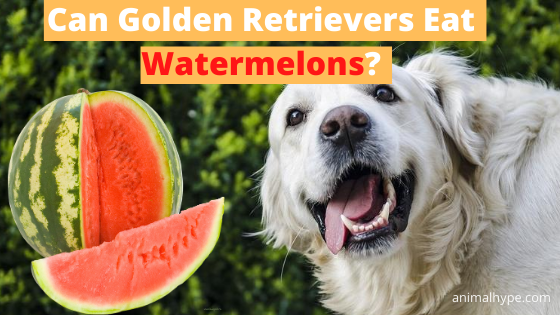 The golden retriever is one of the most popular choices among pet dog owners. It is an exceptionally well-behaved dog that can be trained very well. They are excellent domestic help. They are so adept at their job that they are used for various life-saving jobs. Search and rescue and bomb squads etc. For such a great breed of dogs, the golden retriever also deserves delectable treats from time to time. But owners often wonder whether or not golden retriever can eat watermelons. Are watermelons safe for them?

They love the taste of the watery fruits in the summer. A Watermelon has many great health benefits for the golden retriever. It is rich in vitamins and many nutrients.

However, too much of anything can be problematic. Even the watermelon can be harmful to the golden retriever if consumed too much. The rind and seeds can cause serious health hazards.

Let’s take a look at the pros and cons of feeding watermelon to the golden retriever. 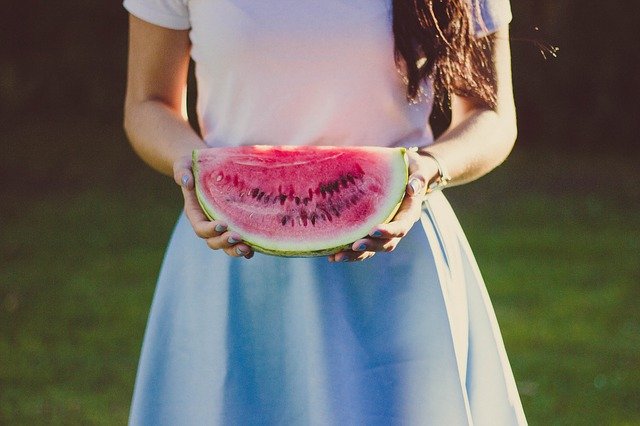 1. A Watermelon is full of essential vitamins and various nutrients. These include potassium, vitamin A, vitamin B6, and vitamin C. These are beneficial for golden retrievers and all dogs in general.

2. The watermelon is of high fiber content. That is good for the digestive system of a golden retriever.

3. The watermelon contains sugar, which could be problematic. But the fiber content in the watermelon insulates the sugar and slows its release into the stream of blood circulation of the golden retriever.

4. It has a low-calorie and low-sodium level.

5. It is fat and cholesterol-free.

6. These factors make it healthier than most of the store-bought dog treats.

7. The watermelon also contains Lycopene. It is an antioxidant that may be helpful in preventing cancer in the golden retriever.

8. Its composition is 92% water, it is an excellent source of hydration for golden retrievers, who are extremely busy dogs.

9. Lastly, it is a great treat on a hot summer day.

That being said, as mentioned earlier, even the best things can prove fatal if the consumption is too much. The watermelon is no exception to that. If consumed the wrong way or fed too much, it can prove disastrous. Let’s now look at the scenarios where watermelon is not good for Golden Retrievers. 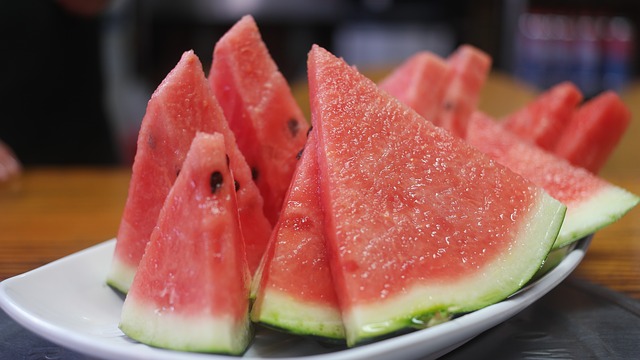 So, when is the watermelon not good for golden retrievers?

How to feed watermelon to Golden Retrievers

Consulting the veterinarian is the first step to decide the appropriate amount to be fed.

What parts of the watermelon are safe for golden retrievers?

This is one of the most important yet most ignored aspects of feeding our dogs. We must know everything about our dog’s feeding habits and activities before introducing anything new to them. Here are some pointers regarding what parts of watermelon are safe for golden retrievers and what parts aren’t.

The seeds – the seeds of watermelon can prove extremely difficult to digest. They can cause blockage of the digestive tract. If the Golden Retriever is of small stature, the intake of Watermelon seeds can be deadlier than if it is a fully grown adult. Young pups are at a greater risk of choking due to multiple seeds being ingested.

The Rind – the rind is also not suitable for eating. Golden Retrievers tend to nibble on the soft inside of the watermelon which is fine. But the rind is extremely difficult to digest and can cause intestinal blockage. Golden retrievers pups have yet more to lose here.

The Skin – The skin of the watermelon is also not safe to be eaten by golden retrievers. It can also lead to the same blockage problems. Pups are at more risk. Results of rind, seeds, and skin ingestion can be vomiting, intestinal pain, lethargy, and constipation.

A 24 hour watching period is advised if a golden retriever ingests the seeds, rind, or skin of a watermelon.

A veterinarian should immediately be contacted if the symptoms show. The safety of the dog should be a top priority for the owner.

Difference between watermelon and watermelon flavored products for golden retrievers

There are many such treats being advertised for Golden retrievers that promise the flavors of watermelons. This should be taken very seriously. These flavored products are heavily infused with sugar, artificial sweeteners, and chemicals that are not safe for Golden Retrievers. They can make the dogs sick.

Too much sugar is bad for anyone. It is especially deadly for Golden Retrievers as it leads to gastrointestinal problems in the present and severe forms of diabetes in the long term. The flavored products contain artificial sweeteners such as Xylitol which is toxic for dogs.

As a precaution, one should stick with natural watermelons that one has prepared for the dogs. That way we can be sure about the contents and as a result, of the safety of our Golden Retrievers.

Now, some questions that you may have

Should the seeds, rind, and skin be eaten by golden retrievers? No, those parts of the watermelon are not safe for the dog.

Are flavored products good substitutes for watermelons? No. They are unhealthy for golden retrievers and should be avoided.

Watermelons are a great treat for your dog. It is tasty, healthy, and easy to feed. There are bad effects associated with it too. However, exercise the necessary precautions and your Golden Retrievers will be very happy with their favorite treat.

Hope you got all the answers you were looking for. Please feel free to contact us regarding your queries.