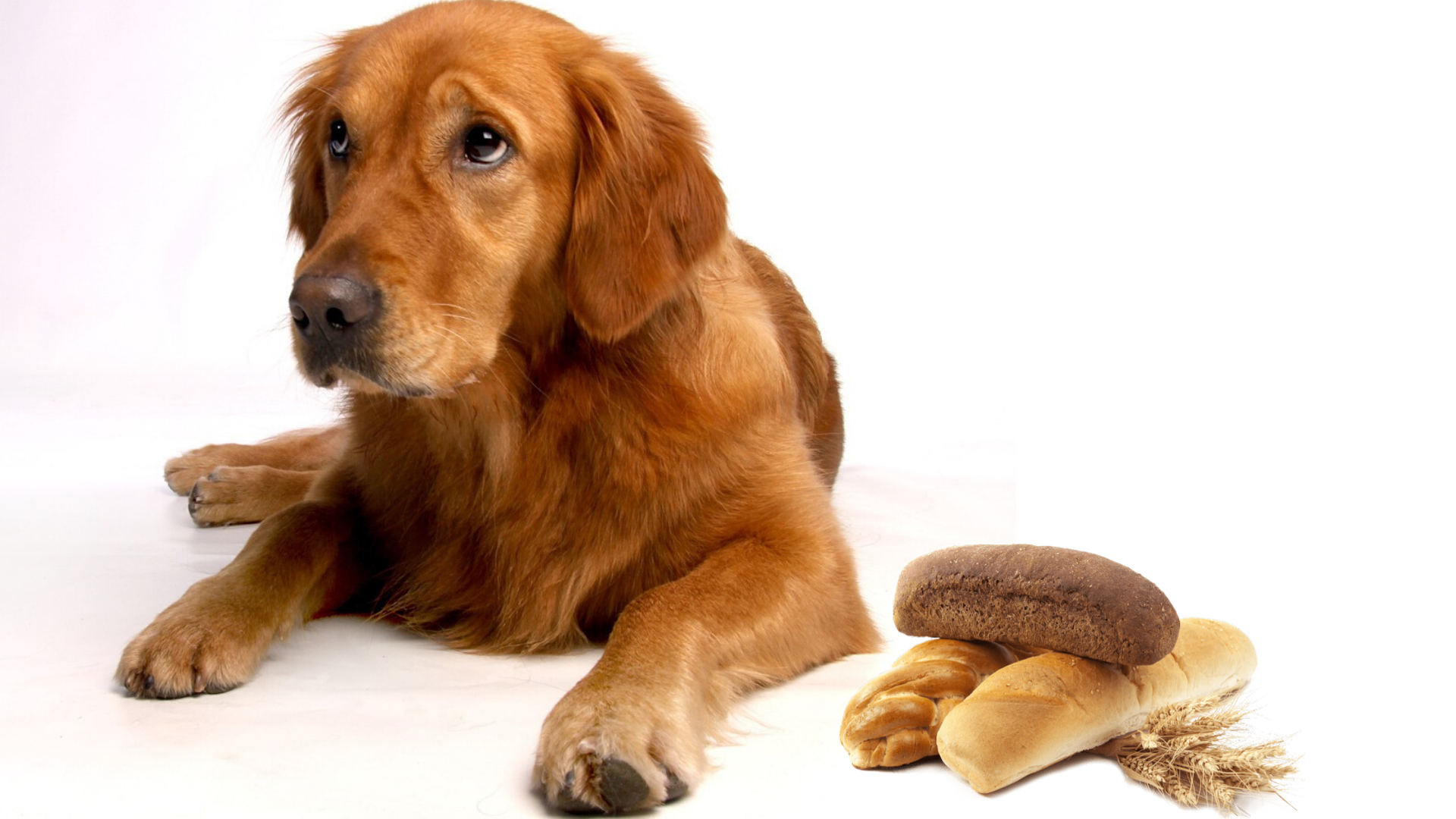 Being a pet parent isn’t a walk in the park especially if you have a golden retriever. The retriever I had at home would move mountains to get a piece of bread. It didn’t matter where he was, he would come running when he heard the word “Bread”.

So, can Golden Retrievers eat bread? Yes, golden retrievers can eat bread but in limited quantities. A single slice of normal bread will not cause any health issues to your golden retriever. But you need to keep in mind that this stomach filling food has high calories and low nutrient content in them.

This is why you should be aware of your retriever’s diet and make sure that you keep them on a balanced diet.

There are many things one needs to keep in mind before feeding bread to golden retrievers. Similar to bread is a staple food in our diet, it can also be adopted to your pet’s diet.

That being said, you also need to be aware that bread cannot supply the required vitamins and proteins to your pet. Owing to these reasons you would also have to supplement them with the needed nutrients to keep their diet balanced.

Is it safe for golden retrievers to eat bread?

When it comes to feeding bread as a staple diet to your canine friend you need to be aware of its nutritional value. Bread, in general, doesn’t have any nutritional value rather they only help fill the stomach.

As a pet parent, you must make sure that you supplement them with other important nutrients and give them adequate exercise too.

The golden retriever is an energetic sporting breed that needs a complete diet filled with vitamins and minerals. Bread, as a staple diet, cannot cater to a golden retriever’s energy requirement and it can often lead to the dog becoming lethargic & dull.

Can I feed my golden retrievers all flavors of bread?

Long gone are the days where flour, butter, egg & yeast were used in making a loaf of bread. These days’ news combinations are being experimented to enhance their flavors & pleasure of eating. But unlike our digestive system, a dog’s sensitive digestive system cannot always accept these new flavors.

This is why you need to think twice before feeding them these new flavors. In this section we will have a look at the different types of bread and whether they can be fed to your golden retrievers.

Nuts Bread– Macadamia nuts, in general, are dangerous to all dogs including golden retrievers. Though the other nuts aren’t as dangerous as macadamia, you shouldn’t feed them these as they can cause obesity owing to the high levels of carbohydrates. Only feed your golden retrievers nuts bread, if they aren’t obese and get adequate exercise regularly.

Onion and Garlic Bread – Unlike onion and garlic is beneficial for humans, it isn’t the case with dogs. Onion and garlic can damage the red blood cells of dogs which can cause anemia. You shouldn’t feed onion or garlic bread to dogs.

Raisins Bread– Toasted bread stuffed with raisins can make your breakfast rich. But make sure that your pet is not fed raisins bread at any time. Raisins can damage the retrievers’ kidney which can be life-threatening to them.

Chocolate Bread – Not just chocolate bread, chocolates, in general, should never be fed to dogs. Chocolate contains a chemical substance called methylxanthines that can cause vomiting, diarrhea, increased body temperature, and urination.

Xylitol Sweetened Bread –Xylitol is a common sugar substitute that is perfectly safe for humans. But when it comes to dogs, xylitol will be absorbed quickly into their bloodstream which stimulates insulin production from the pancreas causing low blood sugar. Medically this condition is called hypoglycemia, which can turn into a life-threatening decease to your pet. So be conscious about the desserts or bread that are sweetened with xylitol.

Which type of bread is better for a golden retriever?

Toasted wheat bread is generally recommended for golden retrievers. Wheat bread is considered to be healthier than white bread or French bread. So give preference to whole wheat bread or grain-based bread.

White bread does not have any nutritional content in them except for carbohydrates. When you bake bread for your retriever, avoid adding sugar, salt, and preservatives to it. Choose high-quality ingredients to make food for your retriever.

Similarly, when you buy bread for your retriever, select a brand with the least amount of sugar content and the one with no resins.

Along with bread, what other food can I feed my golden retriever?

Genetically retrievers are related to the family of wild wolves. Therefore, their diet has to be similar to that of wolves.

Hence their daily meal should contain a particular amount of meat. At the same time try to avoid food that contains a byproduct of meat like intestine and beak. Always make sure that the food you serve your golden retriever is hygienic.

Milk, boiled egg, boiled rice, biscuits, and even mashed potatoes can be fed along with bread.

How do I feed bread to my golden retriever?

The best way to feed bread to a golden retriever is to give them raw bread to eat. But that being said, you need to understand that bread cannot be given as a complete meal to golden retrievers owing to its low nutrient content.

You need to include other supplements in the golden retriever’s diet along with bread. For instance, you can give them bread soaked in milk or feed them some multi-grain biscuits along with the bread.

Is bread dough unhealthy for a retriever?

The uncooked bread dough is unhealthy for your retriever. The digestive system will not be able to function properly due to the presence of yeast which can cause serious bloating and non-stop vomiting.

When your dog ingests the raw dough, the yeast in the dough will ferment and multiply inside the dog’s stomach.

This will eventually lead to excessive bloating and the dog’s intestine will expand. When the stomach expands, it will press against the diaphragm causing difficulty in breathing. This can trigger severe stomach pain and decrease in the blood flow through the stomach wall causing damage to stomach wall cells.

Another problem is caused by the ethanol produced by yeast as a result of fermentation. When this ethanol is absorbed into the dog’s bloodstream, it will lead to alcohol intoxication.

The signs will appear within 2hours after your pet eat the dough. If you notice any change in your dog’s behavior after having the dough, consult a vet immediately.

Are there any health benefits for retrievers in eating bread?

Besides being a stomach-filling food, bread is rich in calories poor in the essential nutrient contents. There is no health benefit in consuming plain white bread. Whereas, whole wheat bread or multi-grain bread can provide some fiber to the retriever.

It is because of these reasons; pet owners are advised not to consider bread a staple diet to golden retrievers. If you plan on including bread as a staple diet, consult the vet to get an understanding of the supplements you need to give your retriever.

How much bread can be fed to a golden retriever at a time?

It all depends on how you have planned your retriever’s diet. If you have planned bread as a staple diet you can give them 3 or 4 slices of bread, soaked in milk. You can also add 1 or 2 eggs to this to keep the meal a balanced one.

That being said, it is advised not to include bread as a staple diet owing to the high carbohydrate content in them. Ideally speaking you can give them a slice of bread once in a while as a treat.