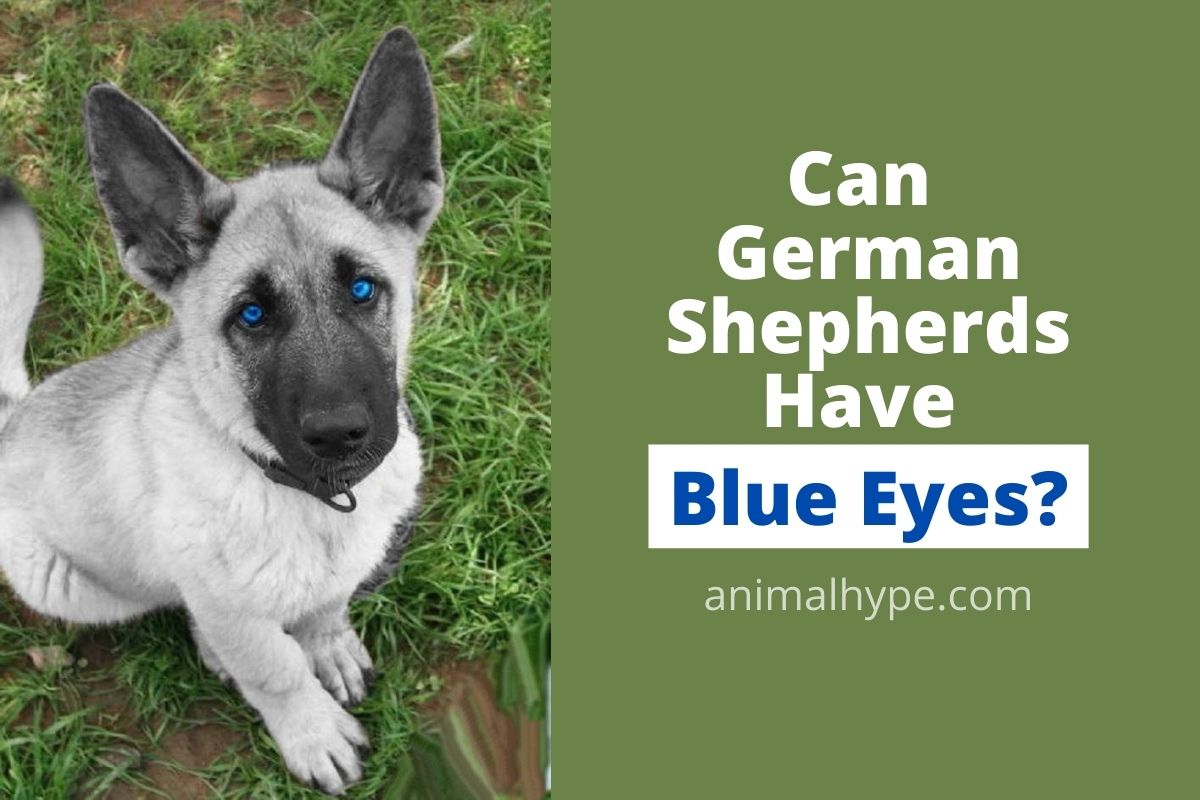 Our family’s German Shepherd was born with blue eyes and we’ve been debating for years if this is a common trait in the breed. While researching this topic, I discovered a great deal of anecdotal evidence that it’s possible for German Shepherds to have blue eyes.

German Shepherds are a popular breed, known for their high energy and loyal nature. They are constantly in play mode and have a desire to protect you like no other breed! With their traits of loyalty, confidence, and intelligence, it is really no wonder that people have this breed on a pedestal.

Continue reading to learn more about the specifics of a German Shepherd with blue eyes.

What do you need to know about a German Shepherd with blue eyes?

The vast majority of German Shepherds have brown eyes. That being said, this trait can have variations if the dog has inherited a case of rare genes.

Let’s dive into figuring out why your German Shepherd may develop enchanting blue eyes.

Melanin is responsible for the natural pigment of the skin and eyes of a dog. This melanin production does not begin until after weeks of being born. Even then, the puppy can take a few months to fully develop its permanent pigment.

So, your German Shepherd may show early signs of blue eyes if the melanin production has not started yet.

Once the melanin level increases as they grow, the blue eyes will disappear and give way to brown eyes.

If your German Shepherd is showing signs of permanent blue eyes, the chances are that they are carriers of the recessive gene.

Any color variation in the skin and eyes of a German Shepherd is caused by this recessive gene.

To have this gene, your doggo will have to have inherited it from both parents.

Dogs with the merle gene have color patches on their skin and often have blue eyes!

The colored patches and blue eyes are not necessarily a concern for pet owners. If anything, the gene will give your German Shepherd an attractive look to stand out!

What may be a cause for concern are the birth defects associated with the gene.

A genetic test of your dog can help you catch this gene early on. So, you can take the right measures to protect your blue-eyed Shepherd’s health before it gets worse.

What does it mean if a German Shepherd has blue eyes?

We now know why a German Shepherd may show permanent signs of color variation. There is still the mystery of what this trait means for the dog and you that requires solving.

Here is a list of conclusions that you can gather from having a blue-eyed German Shepherd.

It is highly unlikely that a pure-bred German Shepherd inherits the blue eye color gene.

Chances are your dog is a mix. One of your doggo’s parents may come from a breed that is known for having blue eyes.

An example of this is a mix of Siberian Huskies and German Shepherds, also known as Shepsky. This mixed breed has been becoming prominent in the dog community.

Siberian Huskies are known carriers of the merle gene and may pass it on to your German Shepherd mix.

It does not fit the dog show standard.

More often than not, the blue color is just a variation due to the genes. Yet, clubs like the American Kennel Club (AKC) and dog shows see the blue eyes as a fault.

So, dog shows that emphasize breeding standards do not accept German Shepherds with blue eyes.

Change in eye color is related to coat color.

Color variation can also happen with coat colors. German Shepherds with low pigmentation are seen to have beautiful white, grey, and blue coats!

White or albino German Shepherds have no natural pigment in their skin and eyes. As a result, these dogs have blue eyes since they do not have enough pigmentation for the color brown.

You may have also seen German Shepherds with blue-tinted furs. Geneticists call this coat color a “diluted” version of the black coat. It is believed to be a result of the dilution gene that the dog gets from both parents.

This dilution “dd” gene waters down the pigment of the skin. On occasion, the gene is dominant enough to also change the color of the nose and eyes.

Whether they have the merle gene or recessive gene, your blue-eyed German Shepherd will have more health vulnerabilities than a common one.

This recessive gene can result in skin conditions, and the merle gene puts the dog at high risk for birth defects!

As said before, the best way to get ahead of the situation is to find out about your dog’s genetic heritage.

What are the risks involved with German Shepherds with Blue Eyes?

Let’s take a look at what health risks are involved with owning a blue-eyed German Shepherd!

As a dog breed, German Shepherds are particularly prone to skin diseases and allergies. If you add to that recessive genes, their vulnerability will skyrocket!

Genetics are largely responsible for skin cell production. If they work like they are supposed to, they will regulate the creation of new skin cells as old ones die.

With recessive genes, things work a little differently. It increases their predisposition to skin diseases. This means a higher chance of your doggo developing a skin disease.

German Shepherds can experience birth defects if their genome includes the merle gene.

The presence of merle mutation has been linked to higher rates of auditory and ocular abnormalities, including deafness and blindness.

To rule out the possibility of any birth defects, conduct a hearing and vision test on your dog.

Blue eyes typically have low melanin. This does not sound concerning until you find out that melanin is what protects you from the UV rays!

That is why blue-eyed German Shepherds are often seen squinting or staying away from sunlight due to light sensitivity.

Too much sun exposure with no protective melanin can increase the risk of ocular diseases.

Can blue-eyed German Shepherds have heterochromia?

Dogs that are odd-eyed or have two different colored eyes have a rare iris condition called heterochromia. So to answer the question, “can blue-eyed German Shepherds have heterochromia” the answer is yes, they can!

So, a blue-eyed German Shepherd can either have two blue eyes or have one blue eye and one brown eye.

What are the risks involved with a German Shepherd with heterochromia?

Heterochromia can make a blue-eyed German Shepherd look hauntingly beautiful. They pose almost no danger to dogs. However, that is only the case when heterochromia is congenital and not acquired.

Acquired heterochromia occurs after something gets lodged in the eye, an injury, or worse, an infection. This can cause swelling of the eye or even bleeding!

If your doggo has suddenly developed heterochromia, time to take notice, and seek veterinary attention.

Some diseases that trigger the onset of heterochromia include:

How do you care for a blue-eyed German Shepherd?

Heterochromia or not, we have established that blue eyes call for extra protection. This way, you can keep the health vulnerabilities under control.

If you sense that your German Shepherd is hurting around the eyes, here are a few preventive steps you can take!

As already said, German Shepherds with blue eyes may experience light sensitivity. So, being out on bright days may cause discomfort to your dog.

You can invest in a pair of doggie shades or sunglasses. Their eyes will stay protected as they bask in the sun during dog walks.

In the case you are unable to prevent an eye infection or injury, call the vet immediately. You should also have an eye ointment handy, so you can take immediate action instead of waiting for the vet.

When something gets lodged in the eyes, dogs start rubbing and scratching their eyes.

A scratch to any vital part of their blue eyes will increase the chances of catching an infection.

So, they always use sanitary wet wipes to keep their eyes clean and hygienic.

Can my Blue-eyed German Shepherd breed?

Yes! Blue-eyed German Shepherds typically do not have any serious health risks associated with them. So, breeding should be no issue. You can be confident of this once you know the genetic heritage of your dog.

A blue-eyed German Shepherd with recessive genes can breed with any dog. However, if your dog is a special case with the merle gene, you may want to think carefully about breeding. Merle gene dogs may pass on their birth defects if they breed with another merle gene carrier.

What does it mean if my German Shepherd’s eyes turn blue?

Permanent blue eyes since birth and eyes changing their color to blue happen for two very different reasons. While permanent blue eyes are caused by genetics, eyes turning blue are a result of several eye conditions.

For instance, cataracts can turn the lens of the dog’s eye cloudy and hazy blue. Glaucoma can also make the eyes appear to be cloudy blue.

Both these conditions can severely affect the vision of your dog. So, if you notice your German Shepherd’s eye(s) suddenly turning blue, call the vet immediately.

I think we have sufficiently answered the question, “can German Shepherds have blue eyes?”. From genetic mutation to rare eye conditions, there are plenty of ways through which German Shepherds can get blue eyes.

The stunning blue eyes are a rare sight to see. Blue-eyed German Shepherds do have their issues, but nothing that will lessen the love that their owners have for them!