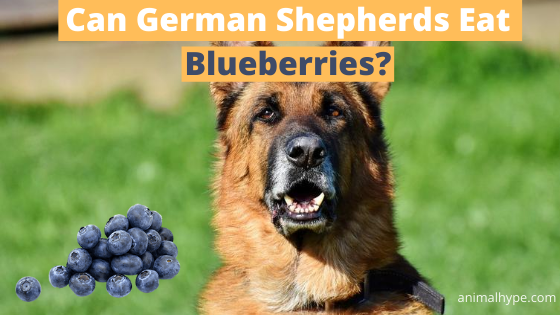 Contrary to what most people believe, dogs are not carnivores. Rather, they are omnivorous mammals and are capable of eating both plant-based and animal-based foods. For the healthy survival of a dog, it must be kept in a balanced diet. They must be fed both meat and plants in equal proportion.

Fruits are the best option to ensure that they have access to the vital nutrients. But the question lies in whether all fruits are safe for them? What about blueberries? Can German Shepherds eat blueberries? In this article, we will discuss the answers to these frequently asked questions and learn interesting facts about them.

In general, blueberries are an excellent supplement for dogs, especially to senior dogs who need a high amount of antioxidants in their diet. But as always, it is essential to keep in mind that blueberries should not be fed to German Shepherds on a regular basis.

There are many such interesting facts about blueberries, which we will discuss in the following sections.

The diet of a German Shepherd 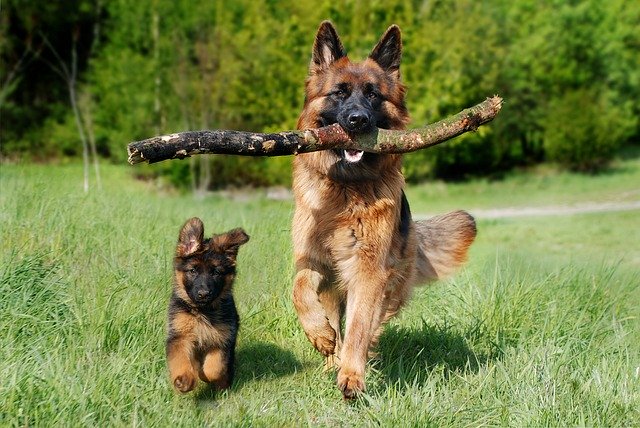 Before we discuss the benefits of feeding blueberries to German Shepherds, you must have a proper understanding of their dietary requirements.

Being bigger and heavier dogs, German Shepherds need a high protein and high-fat diet to cater to their energy requirement. If you own a German Shepherd, you will know that they are highly energetic dogs. This explains why they are commonly seen in the Dog Squads of law enforcing agencies.

German Shepherds need a high protein diet. Ideally, for a young German Shepherd, 24% of their diet should comprise food rich in proteins.

The best way to cater to their high protein requirement is to feed them meat. Blueberries and other fruits can be the best way to ensure that the German Shepherds have enough access to other vital vitamins and minerals.

Is it safe to feed blueberries to German Shepherds? 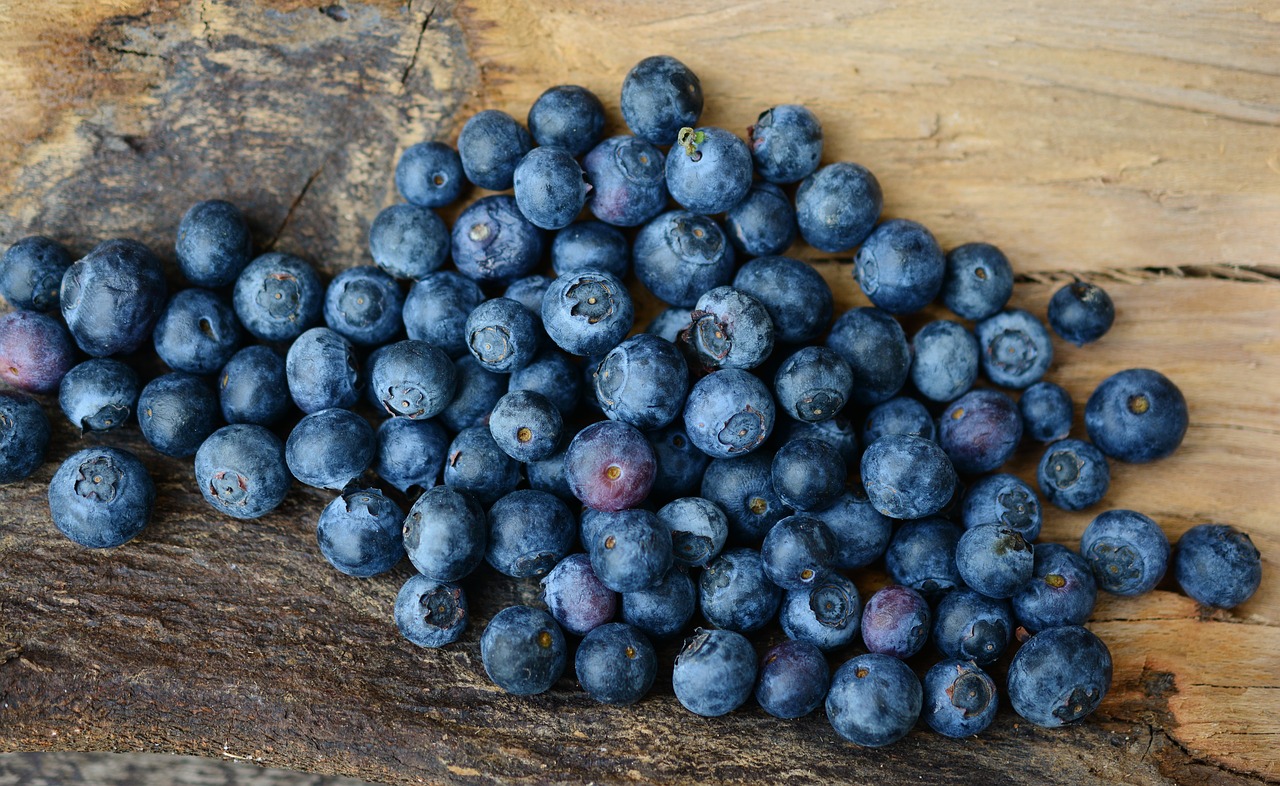 Yeah, German Shepherds can eat blueberries, and it is safe for them too. Blueberries are rich in Vitamin C, fibers, and other nutrients that are vital for the proper nutrition of your canine friend.

But as said in the earlier section, German Shepherds are dogs that need to be kept in a high protein diet.

Blueberries should only be fed in limited quantities and not as a staple diet. Ideally, you shouldn’t feed them more than a few blueberries in a week.

In general, dogs tend to have a sweet tooth, and they are going to love blueberries. But keep in mind that when fed in excess, blueberries can have detrimental effects on dogs.

For instance, being rich in natural fiber, blueberries can cause diarrhea or indigestion in German Shepherds. Also, the high amount of sugar in blueberries can lead to diabetes or obesity and can eventually lead to heart failure in dogs!

Always keep in mind that blueberries should only be fed to German Shepherds as a healthy snack and not in excess!

What are the benefits of feeding blueberries to German Shepherds?

For dogs’ blueberries are nothing more than a yummy treat, but in reality, it is more than that. There are many benefits to feeding blueberries to dogs.

In this section, we will have a look at the benefits of feeding blueberries to your German Shepard.

Blueberries are rich in antioxidants

With age, metabolic by-products start to accumulate in your dog, and it accelerates the age-related ailments in them. These by-products are called free radicals, and they are the leading cause of aging and degenerative diseases. The only way to keep oxidation at bay is by controlling the diet of your German Shepard.

Blueberries are rich in vital vitamins and minerals

Blueberries are not just rich in antioxidants; rather, they are also rich in vitamins A, C, E, and K, as well as other trace minerals. Vitamin C is needed for the proper functioning of the immune system, thereby protecting your canine friend from many diseases.

Vitamin A in blueberries is found to keep their skin soft, silky, and moisturized. This can help control skin infections & hair fall in German Shepherds.

Is it true that blueberries are good for the brain?

If you didn’t know, the brain consumes most oxygen than any other tissue in our body. The same is the case with dogs and other mammals for that case. Brain and the nervous system are more vulnerable to oxidative stress.

As said earlier, oxidative stress is detrimental, and eventually, it can lead to senility or other neural disorders in your dogs.

Oxidative stress is mainly caused by old age or accumulated toxins from the food that they eat. Controlling the diet and supplementing dogs with food rich in antioxidants is an effective deterrent against this oxidative stress.

A study on the antioxidant property of blueberries was conducted at Tufts University in Boston, and it was identified that blueberries contain an antioxidant named anthocyanin.

It was also found that anthocyanin could cross the blood-brain barrier and reduce the oxidative stress of the brain and nervous system.

So yeah, blueberries are a clinically proven dietary supplement and are good for the brain!

How do I feed my German Shepherd blueberries?

Two types of blueberries are available in the market. One is the wild blueberry, and the other is the cultivated one, and they are both safe for consumption. You need to ensure that you clean the blueberries thoroughly before feeding your dogs, especially if you are feeding them cultivated blueberries.

There are high chances that these fruits would have pesticides on them. In general, dogs cannot handle pesticides, and it can cause severe digestive disorders in them.

Blueberries should only be given to dogs as an occasional treat and not regularly for the high sugar content in them. Ideally, you can include blueberries as 5% of a fresh diet, and for older dogs, you can increase it to 10%.
Also, ensure that your German Shepherd is not allergic to blueberries!

Can I feed blueberries to German Shepherd pup?

Yes, you can feed blueberries to German Shepherd pups, if they are more than three months old. Clean the berries thoroughly to remove even the minute traces of pesticides on it.

Start by giving them one or two berries and look for any signs of allergic reactions. The common symptoms of food allergy include stomach upset, vomiting, itching, or loose stools.

If you are sure that they are not allergic to it, you can start giving them blueberries as an occasional treat. You can include blueberries as 5% of their fresh diet.

Note that feeding blueberries in excess can cause severe stomach upset and diarrhea in pups.

What are the other fruits that I can feed my German Shepherd?

Apart from blueberries, there are other fruits that you can give them as an occasional treat. In this section, we will have a look at those fruits!

Apricots – They are rich in Vitamin A & C, Potassium, and beta carotenes.

Banana – Rich in potassium and is good for heart and kidney.

Cranberries – Rich in vitamin C, fiber, and manganese and they also have anti-inflammatory properties.

Some of the other fruits that you can feed your German shepherds are coconut, cucumber, dates, and kiwi fruit.

Can German Shepherds Have Blue Eyes?