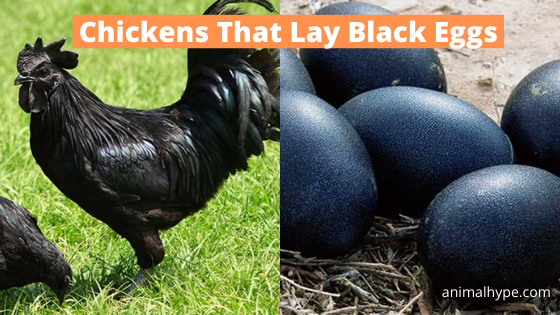 Whenever you hear the word “egg,” which color appears in front of your eyes? It is most likely white, isn’t it? If you’re the pet-owner of Marans, Australorps, or any other brown egg-laying chicken breed, you might imagine a brown egg in your head.

The pet parents of the Easter Eggers can see multi-colored eggs as well. But does a black egg appear in front of any of your eyes?

Yes, you read that right. We’re talking about black eggs laid by chickens.

Does any chicken breed lay black eggs? In this article, we intend to find out the answer to precisely this question. 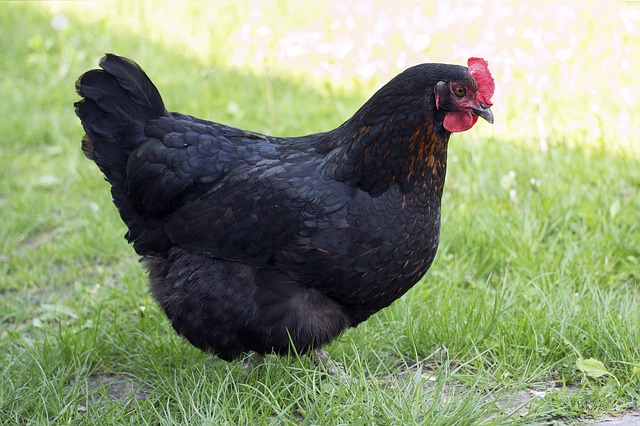 The existence of black chicken eggs is a highly controversial issue. Most of us have never actually seen a black egg laid by a chicken, but the word of the town is that some chicken breeds can lay black-colored eggs.

Let us, for a moment, suppose that there are chickens that can actually lay black eggs. If you were to guess which chicken breeds could lay black eggs, what would your first guess be?

Chicken breeds that are completely black themselves seem like the best place to start looking for black eggs, don’t they? Let us take a look at these chicken breeds first. 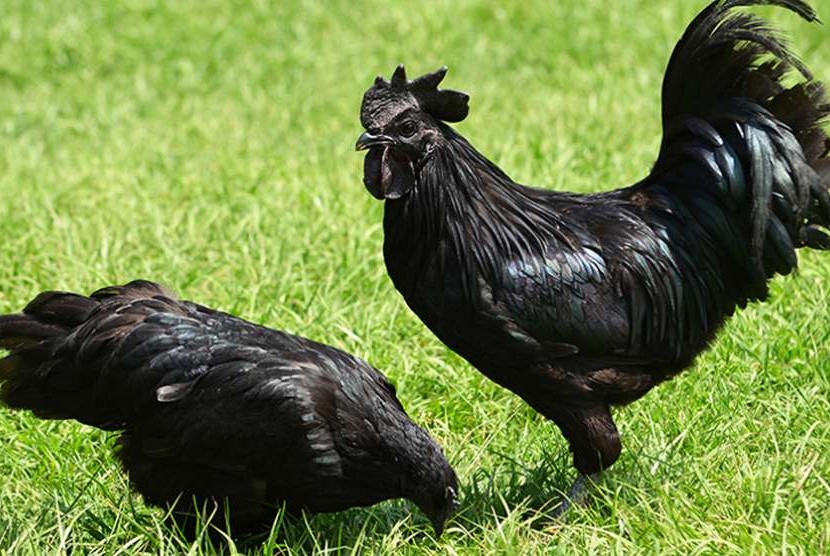 In the world of the poultry birds, the name of Ayam Cemani is quite popular due to its exotic black color. Sure, several chicken breeds appear black on the outside; many of them have black wings all over their bodies.

However, what sets the Ayam Cemanis apart from the other black chicken breeds is its blackness to the core. The Ayam Cemanis don’t just have a black body, but they also have black feathers, beaks, eyes, and claws.

If you skin an Ayam Cemani, you will find their meat, bones, and other internal organs to be black as well. That is how they have been named.

In Indonesian, “ayam” means a chicken, while “cemani” is a Javanese term that refers to someone or something that is thoroughly black in color. The Ayam Cemanis are native to Indonesia. The Indonesians claim that they have originated from Temanggung, a regency in the province of Central Java, Indonesia.

Do you wonder what makes the Ayam Cemanis so thoroughly black? The answer to your question is fibromelanosis. Fibromelanosis is a genetic mutation that causes hyperpigmentation in chickens, turning them black from inside out. However, not all their organs are truly black. For instance, take their blood or tongue. Their blood is a dark shade of red, while their tongue is grey.

Due to their unusual coloring, the Ayam Cemanis are considered to be sacred by the native people of Indonesia. In the Indonesian culture, it is said that these black chickens possess some sort of mystical powers and can bring great fortune to the family who owns them. Many people also love these chickens for their unique meat. The Ayam

Cemani is, thus, quite an expensive chicken breed, both in Indonesia as well as in the international markets.
As backyard pets, these chickens are remarkable as well. They are very healthy and muscular and make active and friendly pets. They can’t be intimidated easily and mix well with other chicken breeds. 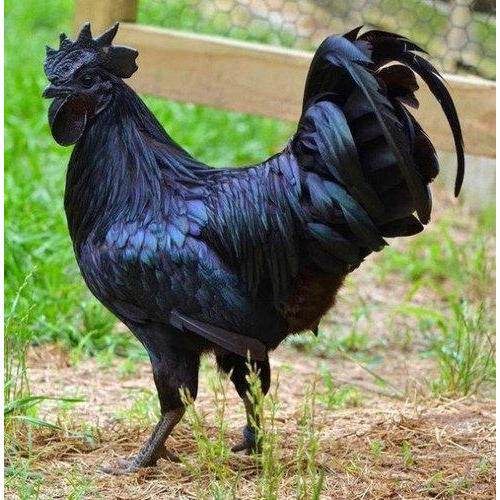 They are native to India and have originated from Dhar and Jhabua, Madhya Pradesh. You can also find these chickens in the districts of Chattisgarh, Rajasthan, and Gujarat.

The Kadaknath chickens are mostly bred by the tribals of these regions, who consider them to be sacred. Many of these people also perform a ritualistic sacrifice of these chickens to the Goddess Kali on the festival of Diwali.

Many believe Kadaknath chickens to be a sibling of the Ayam Cemanis. The two have quite a few similarities; both are black on the inside and outside. However, the Indians claim these chickens to be their own unique breed.

Although the Kadaknath chickens do not have the American Poultry Association’s formal recognition or the American Bantam Association (most probably because they are not found in the US), their meat has a Geographical Indication tag (GI tag) approved by the Government of India.

Due to the high demand for their meat, the population of Kadaknath chickens has declined terribly in recent years.

If this continues for even a couple of years more, their species could become extinct. However, to ensure that it does not happen, the Government of India has launched a Kadaknath Poultry Breeding Program in 500 rural families who are below the poverty line.

The eggs of the black chicken breeds: black or not?

If the last section, we talked about two chicken breeds who are truly black, both from the inside as well as outside. If any chicken breed can lay black eggs, it should be them. But do they? Let’s find out what their eggs look like.

The Ayam Cemanis are said to lay black eggs. This, however, is not true. The eggs of the Ayam Cemani hens are creamy-white in color, occasionally acquiring a sky-blue tint. Each egg weighs about 45 grams. The Ayam Cemani’s egg-production capability can be considered fairly poor since they can lay about 80 eggs in a year.

Just like the Ayam Cemanis, the Kadaknath chickens don’t lay black eggs either. Instead, the color of their eggs is light brown with a pinkish tint to it. These chickens are better than their supposed siblings as far as their egg-laying capacity is concerned. A Kadaknath hen can lay about 120-130 eggs in a year.

Thus, we have proved that the myth of black chicken eggs is just that: a myth. In reality, there are no chicken breeds that can naturally lay black eggs. If any of you have ever seen a black chicken egg, it has probably been spray-painted or dyed to look like that.

Now that we are sure that chickens cannot lay black eggs, are you interested in knowing about any other bird who can lay black eggs? If you are, check out the next section.

Emu: the only bird that lays black eggs 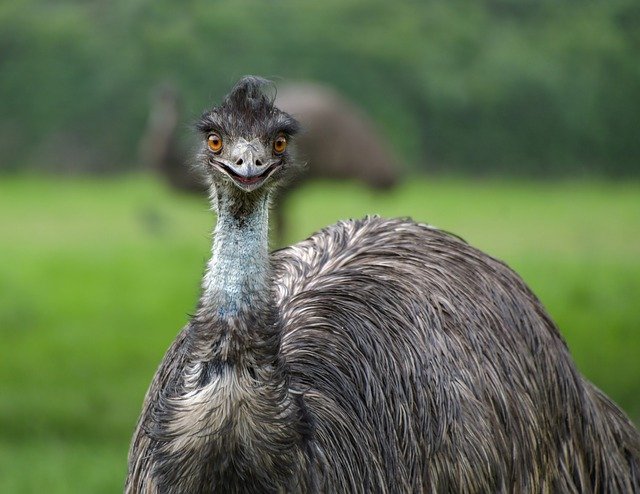 Emu is the second-largest bird living on the planet, after its flightless relative, Ostrich. Native to Australia, these birds have soft feathers that can’t help them in flying.

They have long neck and legs that make them a great runner. The male Emus are hot-headed and fight among themselves quite frequently. Unlike other animals and birds, young emus are raised by their fathers and not their mothers.

The eggs of Emu 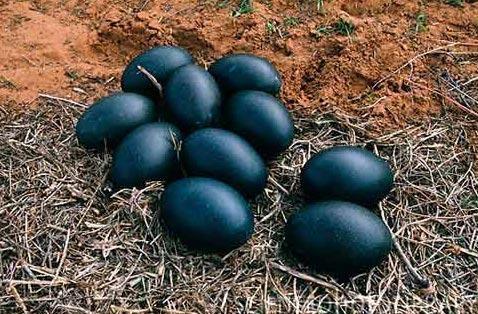 Have you ever seen an Emu’s egg? In comparison to any other bird’s egg, including chickens, Emu’s egg is huge. These eggs have a height of 5 inches and a width of 3 inches and can weigh about 9 kgs. A Single Emu egg is equivalent to about a dozen chicken eggs.

At first glance, Emu’s eggs appear to be black. However, they are not really black. If you take a closer look at them, you will realize that they have the darkest shade of green, which seems to be black from afar. Although Emu’s eggs are not black, they are as close to black as any bird’s egg can be.

Do the Silkies lay blue eggs? No, the eggs laid by the Silkies are cream in color. The myth of the Silkies laying blue eggs has originated from another belief that states that the color of the earlobe of a chicken determines its eggs’ color. This, however, is not true, as you can see in the case of the Silkies. Silkies have blue earlobes, while the eggs they lay are cream-colored.

To sum it up, there are no chicken breeds in the world that can black eggs as of now. However, thanks to genetic studies’ continuous development, we might encounter black egg-laying chickens in the near future.