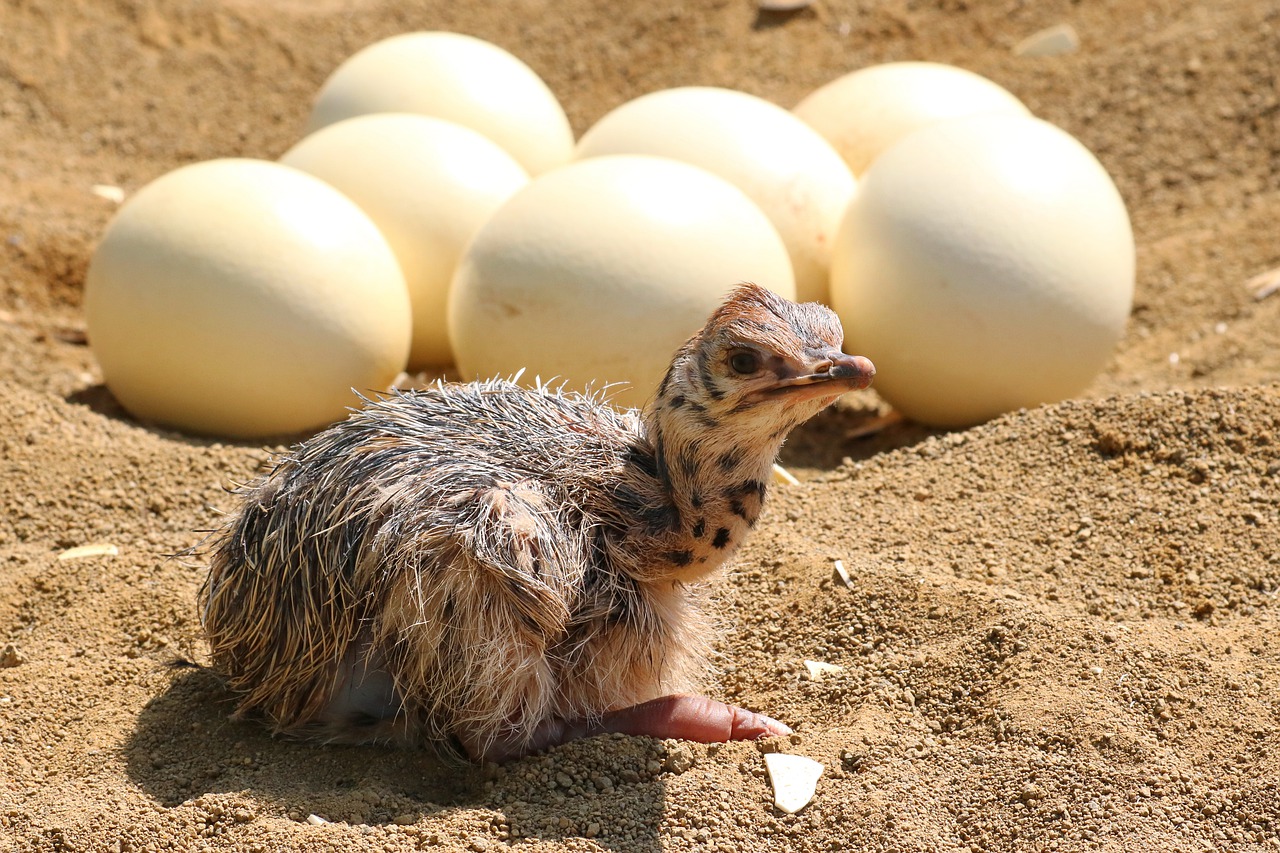 An ostrich egg would weigh around 1.3 Kg and a newborn ostrich baby will have a size of a chicken. Apart from being the largest among the offspring of birds, there are a lot of interesting facts about ostrich babies that most people don’t know.

In this article, we have compiled a list of interesting facts, cute photos, and videos of baby ostriches that you ought to see. We have also answered some of the frequently asked questions about baby ostriches.

Ostrich and its eggs 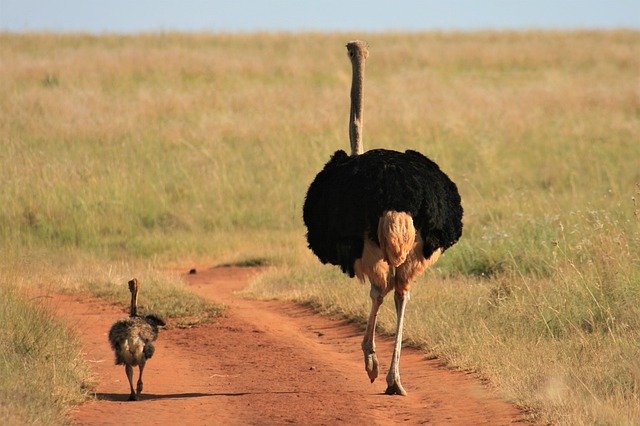 You all must have seen a bird’s egg at some point in time. They are all tiny and the hatchlings are also tiny that they can hardly be weighed.

Well, that’s not the case with an ostrich egg. An ostrich’s egg weighs a staggering 1.5 kilograms on an average and is 15cm long making it the largest egg in the world.

Apart from being the largest eggs, ostrich babies are also the largest among the babies in the bird kingdom. A newborn ostrich baby can be as big as a chicken.

For instance, if a predator attacks the newborn, the male will jump in and chase the predator away while the female takes cover with the chicks.

Baby ostriches are born together 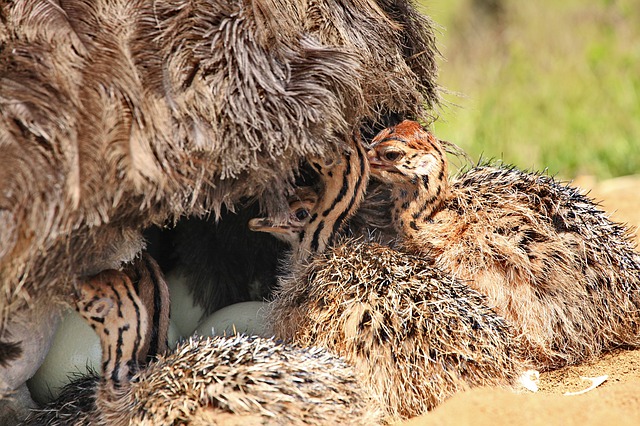 Ostriches are flightless birds that are known for the speeds at which they can run. So unlike the other birds, ostriches tend to live in groups that are called a herd.

Living in herds gives them better protection from the deadly predators as they work in a team. In general, a herd is comprised of around 10 to 14 ostriches and then there are larger herds that can almost have around 100 ostriches.

Similarly, there will also be a dominant female in the group who will mate only with the alpha. The alpha male in the group builds a nest in the ground and then attracts the females by making moves that look similar to dancing. This, in turn, means that mating happens almost at the same time so does the females lay eggs in the same period.

The dominant female in the group will lay up to 11 eggs while the other females in the group lay around 3 to 6 eggs.

Eggs laid by the dominant female is kept in the center and the other eggs are arranged around them. An important thing to be noted is that the alpha male and dominant female take turns to take care of the eggs and they brood them in shifts.

These eggs will hatch in around 40 to 46 days and there is going to be a group of chicks in the herd!

During the 40 to 45 days they spend inside the eggs, these babies are born with their bodies covered in feathers. This is quite different from the case of most birds that are born without feathers.

Not just, feathers, these newborn ostrich babies can walk within minutes after they are born.

This is considered to be an evolutionary advantage, they have accumulated over the years. Owing to their big size, flying is an energy-consuming process for them and a luxury they cannot afford.

This is why over the years they have evolved to be a huge bird that can only be preyed by very few. Their powerful legs, sharp claws and the ability to run at speeds of up to 70kmph are their only mode of defense.

Owing to these reasons even the newborn babies are born fully developed and can stand up within minutes after birth.

Though they are strong enough to walk, they can’t yet run as fast as the adults or use their legs to defend themselves. This is why the alpha male in the groups along with the other males protects the babies in the herd from predators.

Not just from predators, these babies need protection from the scorching heat and rain. So for the first few weeks, until the babies are strong enough, the adults keep them huddled under their stretched wings or body.

As said in the earlier sections, ostriches live in groups and these groups are either called a herd or a flock. 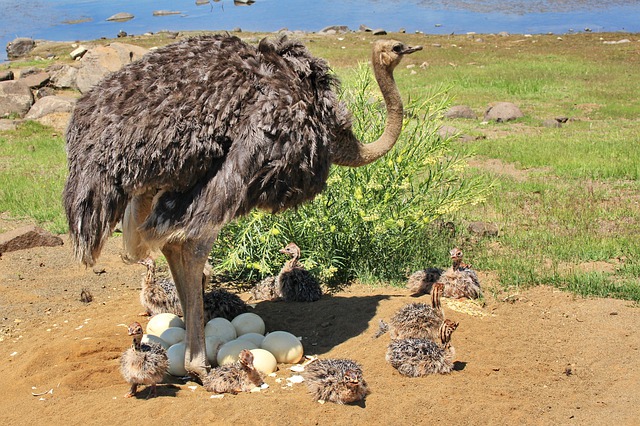 As said in the earlier sections, on ostrich baby is born fully developed and much better developed when compared to the other bird species.

These babies are capable of walking with their parents within minutes after they come breaking the shells. It is important to understand that, though these babies are strong enough to walk by themselves they cannot live on their own and needs help from their parents.

Unlike the other birds, the ostrich babies are not fed anything by the adults in the first 2 days after birth. These newborn babies will have a highly nutritious fluid in their tissues that has to absorbed by them. After this period, they are fed by the adults.

Ostriches are omnivorous birds and they generally eat roots, leaves, and seeds but they also consume insects, snakes, lizards, and rodents. The babies generally eat whatever the adult ostriches can eat.

The male ostriches are the mentors for the chicks. These babies after they are a few months old begin to venture out with the adults to learn life.

The adult males teach them how to hunt, how to avoid predators, and what to do in case of an attack.

In general, the babies stay with the adults for almost 18 months after which they venture out in search of a herd. Though 18 months might seem like a long period, it isn’t because an ostrich can live up to 70 years.

Now that we have discussed some important facts about baby ostriches, let’s have a look at some of the commonly asked questions about them. 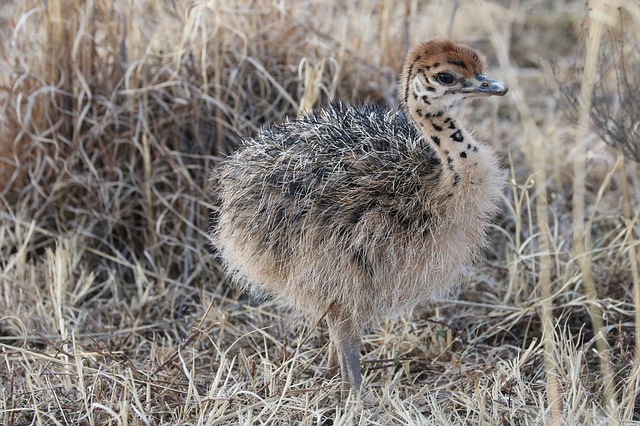 Baby ostriches do not resemble the adults in anything other than their sharp beaks. But as said in the previous sections, ostrich babies are born as big as the size of a chicken.

This is, in fact, an evolutionary adaptation they have gained over the years, having a light brown color helps the babies better camouflage themselves increasing their chance of survival. This comes in handy even in the case of adults too.

For instance, when the adults take shifts to brood the eggs the females that have light brown feathers take the morning shift because she can better camouflage during the day and the males with the black feathers take the night shift.

These babies, once they are a few months old, start shedding their feathers and start growing colors corresponding to their gender.

How many babies do ostriches have?

The mating process of ostriches is quite different from that of the other birds that we see around. Ostriches live in groups of 12 to 14 and this group of ostriches is called a herd or a flock.

In short, there will be around 25 eggs at a time during the mating season. But not all these eggs are equally taken care of neither all the 25 eggs hatch. The dominant female in the flock will discard the unhealthy eggs and brood only those eggs that she is certain about.

How big are baby ostriches?

Baby ostriches are the largest among the newborns in bird species. These newborns can weigh anywhere around 1Kg right after they hatch from the egg and within a few days, they will be the size of an adult chicken.

Though they are the largest newborn among the bird species, they are the smallest when compared to the size of the adults.

Even if they tried to fly, their puny wings cannot generate enough lift for flight. The bulkiness of their body is in fact, an evolutionary adaptation they acquired while they lost their ability to fly.

The babies being large gives them an advantage over most predators because when it comes to the animal kingdom size matters!

What do baby ostriches eat? 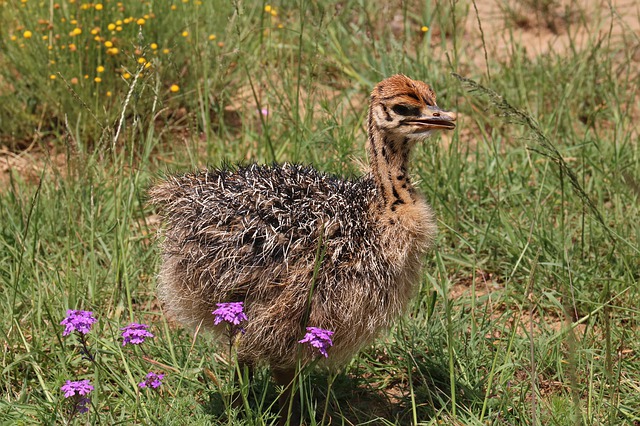 Baby ostriches’ can eat everything the adults can eat. Ostriches, in general, are omnivorous birds. They generally eat roots, leaves, and seeds but they also consume insects, snakes, lizards, and rodents.

The babies are not fed anything by the adults for the first 2 days after birth. Rather they are left as such to absorb the highly nutritious fluid in their tissues that is needed to boost their immune systems.

Two days after birth, the babies are fed whatever the adults eat. For the first 2 to 3 months after their birth, they are fully dependent on their parents for survival.

Once these chicks are old enough, the males in the herd will take them out foraging with them. That’s where these babies learn the basics of hunting.

Can I Keep a baby ostrich as a pet? 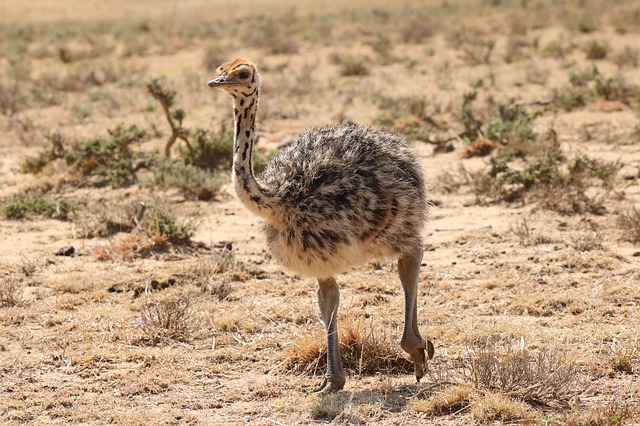 Yeah, you could get a baby ostrich as a pet if you need it. But we would never recommend keeping one as a pet. It is quite understandable as to why one would want to keep such an exotic bird as a pet but they aren’t anything like you can imagine.

Baby ostriches grow fast, they won’t take much longer to become 9ft tall and weighing a staggering 200kg. Ostriches aren’t friendly animals and are known for being aggressive.

They can run up to speeds of 70 mph (or 43.496 mph) so once they get aggressive you can’t escape from them easily. What makes them even dangerous is their powerful legs and claws, these giants can cause life-threatening injuries with ease.

If you still insist on getting one as a pet, make sure to get one that has just hatched from the egg. In the case of birds, they believe that the first living creature they see after hatching to be their mother. This is called imprinting, and this can help in making them behave friendly to you.

How much does a baby ostrich cost?

What Do Ostriches Eat?

Is It True That Ostriches Will Eat Anything?

Do Ostriches Stick Their Heads in the Sand?