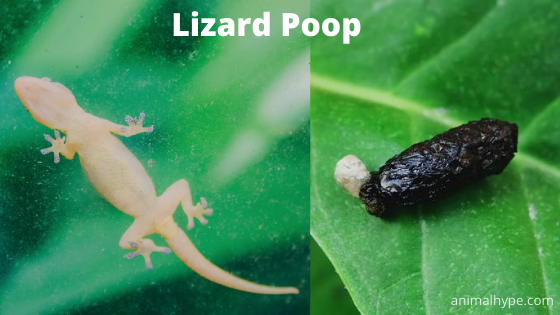 Lizards are a common household pest that can be found almost everywhere in the world. There are about 6,000 thousand identified species of lizards and they have all been a part of this planet for almost 220 million years. Though they are often labeled as a household pest by many, they are not as problematic as they are often portrayed to be.

Lizards always keep a safe distance from humans. It is just that most people tend to have a natural aversion to lizards. But it is important to note that having lizards in your house can be beneficial in many ways. Considering their diet, they can be an excellent natural insecticide and can keep insects at bay.

As said earlier, lizards are among the common household pests and they always keep a safe distance from humans. The best way to identify their presence is by identifying their poop.

So, what does lizard poop look like? Lizard droppings are black in color and have a unique white-colored tip on one end. In most cases, they tend to be dry except for the white tip. Lizards have a unique excretory system, and they relieve the fecal matter and urine through the same opening. The white coloration on the tip that you see is uric acid (nitrogenous waste) that is excreted.

Though lizards are not dangerous, their poop can cause serious trouble in case of direct contact. Like all reptiles, the poop of lizards contains salmonella, and direct contact with it can prove fatal.

In this article, we will look at the droppings of a lizard and discuss the effective ways to identify them correctly. We shall also discuss some of the frequently asked questions regarding their poop and how to get rid of lizard infestation. 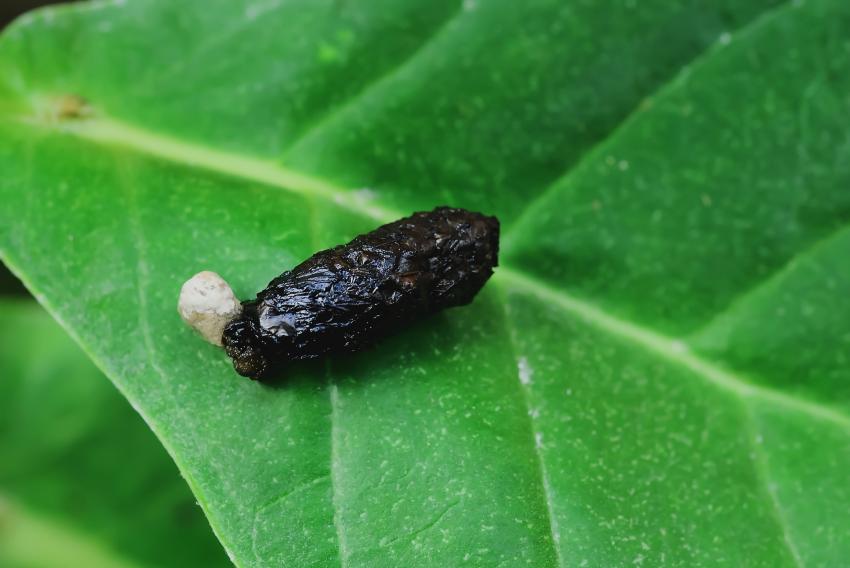 Lizard poop is black with white colored tips on one end. Therefore, it is relatively easy to identify their poop from that of other household pests. Identifying a lizard poop outdoors can be quite tricky because they have close resemblance with the poop of bats.

Contrary to the other household pests such as spiders, lizards do not choose a latrine site to relieve themselves.

One can spot lizard droppings almost anywhere in the house, for instance, on tables, couch, floor, wall, bathrooms, attics, or other places.

Regardless of where you find the poop, look at whether the poop is pellet shaped and look for the white-colored tip. If these two are there, you are looking right at a lizard’s poop.

How to properly identify a lizard’s dropping? 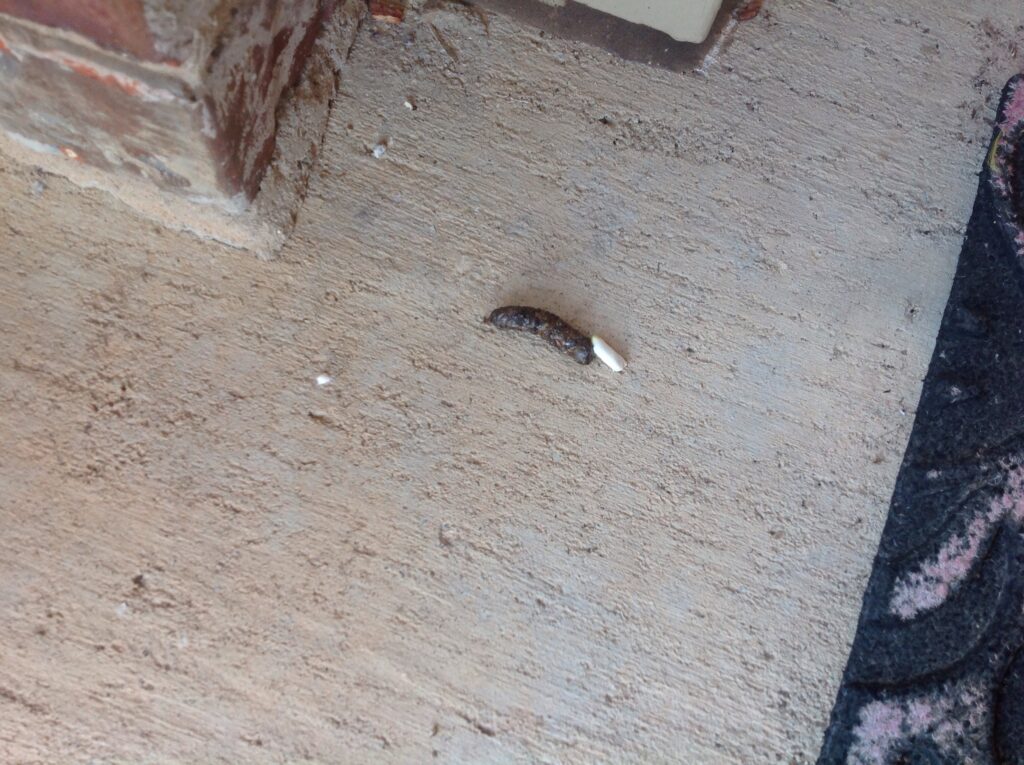 Identifying a lizard’s poop is easy when it is found indoors. But outside, it can be tricky! In this section, we will look at how you can properly identify the droppings of a lizard.

Droppings of household lizards irrespective of the species are dark and pellet-shaped. They can be around ¼ inch long and 1/8 inch wide.

As said earlier, the droppings of the lizards that are commonly seen in houses have tapered or rounded ends. Lizards have a unique ability to retain almost 95% of the moisture from the undigested food because of which their fecal matter is dry. But the white-colored tip can be squishy.

Due to their carnivorous diet, droppings of most lizards have a dark appearance. The common household lizards’ droppings are generally black and will have a white color at one of the ends. This white colored substance on the droppings is the nitrogenous waste excreted by the lizard.

Why do lizard’s droppings have white-colored tips? 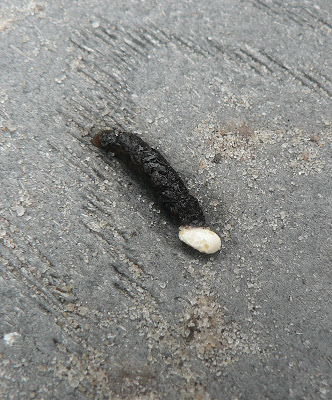 The white part in the lizard’s poop is the nitrogenous waste that is excreted along with the fecal matter. To better understand, we will have a look at the excretory system of a lizard and its functioning.

Contrary to other animals, lizards rarely have access to freshwater. Even if they had access, they could not drink water like other mammals because they lack larynx.

All they can do is dip their tongue in water and wait until enough water is absorbed, and this is something they can’t possibly afford to do because of threat from predators. Owing to these reasons, lizards have developed a unique adaptation to survive with a limited supply of water.

The uric acid is stored and excreted along with potassium salts, and they need hardly any water for this purpose. It is the uric acid that gives the lizard droppings its unique white coloration on one end. This has almost the same consistency as that of the feces and is excreted together.

Another way in which they conserve water is by converting the urea in the blood to uric acid. Uric acid isn’t soluble in water and is less toxic than blood urea and can easily be transported back to the bladder without water. Apart from these, lizards are capable of absorbing almost 95% of the water from their stool before excreting.

Are the droppings of house lizard dangerous?

The droppings of lizards contain the disease-causing salmonella bacteria in it. Coming into direct contact with the lizard poop increases the chances of contracting salmonellosis.

The common ways people come in direct contact with the lizard droppings are through open wounds or ingesting food that has been contaminated by lizard poop.

Though salmonellosis isn’t fatal, the symptoms associated with it can last almost a week. The common symptoms of salmonellosis are diarrhea, fever, abdominal cramps, and vomiting.

In most cases, the risk of contracting these zoonotic diseases from lizards can be reduced by maintaining good personal hygiene. Make sure that you clean the vegetables and fruits that are kept in the open before consuming them. Also, if you have a reptile as pets, make sure that you clean your hands with soap after you handle them.

It is important to note that kids and elderly people are vulnerable to contracting salmonellosis and other zoonotic diseases from lizard poop. It is why it is advised not to keep pet lizards if you have kids at home.

Other diseases that can be contracted from lizard poop include Leptospirosis and Botulism.

No, lizards do not pee. This is, in fact, an adaptation possessed by lizards owing to limited access to water. Lizards are reptiles that have restricted access to freshwater, and even if they have access, they cannot drink the water due to the absence of larynx. Therefore, lizards are capable of retaining maximum moisture from the food that they eat.

Unlike mammals, where their excretory system converts the nitrogenous wastes in the body to urea, lizards convert them into uric acid. Uric acid is not soluble in water, and they save a lot of water through this.

This uric acid is a paste-like substance and is secreted as microscopic crystals into the cloaca (passageway for feces, urine, and reproduction). It is then excreted along with the fecal matter as a watery suspension. It is important to note that lizards do not have a separate opening for excreting the uric acid.

How to safely remove lizard poop?

Cleaning the droppings of a lizard is easy and all that you would need is a damp cloth. But you need to be extremely careful if you find their droppings on kitchen utensils.

In that case, you should first clear their poop with water and wash the utensils using soap. In fact, it is better that you make it a habit to clean the kitchen utensils before you use them if there are lizards in the kitchen.

This isn’t the case if you have pet lizards at home. In that case, either you can choose to clean its cage daily or once a week. Either way, make sure that you wear gloves when you clean their cages. As said in the previous sections, the poop of lizard contains many disease-causing bacteria and you don’t want to risk coming in direct contact with them through the droppings.

Also note that, while cleaning the cage if you were to come across dried droppings, be extra cautious. You should sprinkle some water over it to prevent it from crumbling and becoming airborne. If you were to inhale these airborne particles it can trigger allergic reactions. Clean the cage using a damp cloth and disinfect it properly.

Are Lizards beneficial? Should they be considered invasive pests?

For most people, lizards are a matter of horror owing to which, they wouldn’t want to be anywhere near a lizard. But in reality, they aren’t as creepy as they look rather, they are beneficial to us. You shouldn’t be bothered if there are one or two lizards in your house.

If you didn’t know, common household lizards prey mainly on small insects such as mosquitos, and so on. They can be considered as an excellent natural insecticide. Lizards’ in general like to keep a safe distance from people so you won’t have to ever worry about confronting them either.

How to remove lizards from your room?

If you still want to get rid of lizards from your room, there are certain ways to humanely do it. Let us have a look at each one of them.

Lizard is cold-blooded animals and they need an external source of heat to survive. By lowering the temperature of your room to around 22 degrees Celsius, you can create an unfavorable environment for lizards.

Lizards love mosquitoes and it is the reason why we suggested that you let one or two lizards live in your house. Using mosquito repellents are found to be effective against mosquitoes and other small insects. So, by cutting off their food sources you can limit the extent of the infestation.

Use eggshells or garlic

Lizards dislike the smell that comes from eggs. So, the next time you have eggs, dry the shells (leave a small layer of tissue on the shell) and keep them in places where they are commonly seen. Note that dried eggshells are not a permanent solution.

Similarly, you can also use garlic as a natural repellent. Cut a clove of garlic and leave it in places where lizards are frequently seen. You can also put it near a small table fan, to blow it across the room. Just make sure that you cut the cloves enough to get the smell out!

30 Types Of Lizards In Florida