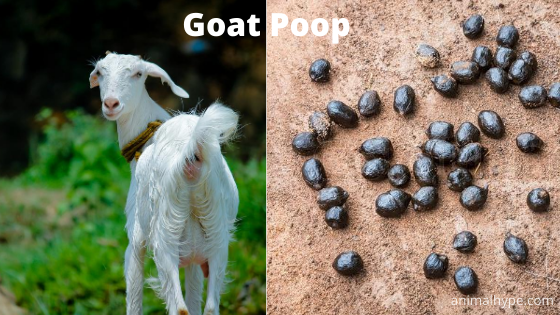 Poop is indeed a dirty matter to talk about, but it isn’t the case with everyone. When it comes to goat farmers, they should keep an eye out on the poop of the goats. For their shape, texture, and color talk a lot about the goat’s health.

Goats are ruminant animals, owing to which the chances of developing digestive disorders are high for them. Being ruminants, they have a highly sensitive digestive system that is affected by even the slightest infection or dietary imbalance.

In the end, it is all reflected in the animal’s poop. Which is why it is important for goat owners to keep an eye out on the goat’s poop.

So, what does a goat’s poop look like? The poop of a adult healthy goat is hard and oval-shaped pellets with a dark brown color. These pellets stay separated which is something that is unique to goats. You need to keep in mind that even the slightest change in the shape or color of the goat’s poop can be an indication of an underlying medical condition or a digestive disorder.

Keeping an eye out on the poop of goats can help you identify a problem before it becomes fatal. If you didn’t know, goats are prey animals and they can hide the symptoms of any diseases until it becomes serious. In some cases, it can even lead to the death of the goat.

In this article, we will have a look at the poop of a goat and some additional information on it. 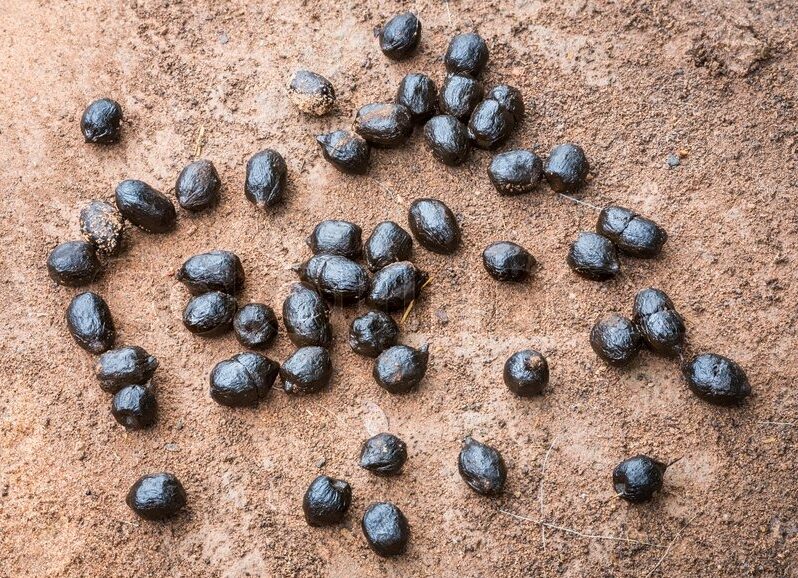 As said earlier, the droppings of healthy goats are hard and oval-shaped pellets that are evenly distributed. The droppings generally appear black or dark greenish, but on a closer look, you will see that it is, in fact, dark brown in color.

It is important to note that even the slightest variation in shape, distribution, and color of the poop can be an indication of an underlying medical condition that needs immediate medical attention. For instance, Grey, Green, or Dark Tarry Stools might be an indication of salmonella infection.

Similarly, when the pellet logs or clumps (which isn’t typical for a goat), it can be an indication that the goat is feeding too much or is having trouble adjusting to a new diet.

How do goats poop pellets?

Goats are ruminant animals, and they have a large rumen and reticulum in proportion to their body. It takes them almost 2 to 3 days before the food that they eat is completely digested.

The process of digestion starts with the goats regurgitating the cud. This properly chewed food is swallowed by the goat again, which then passes through the four different chambers of their stomach. It is inside these chambers where most of the nutrients and moisture are absorbed.

Once the digesta reaches the 4th chamber known as the abomasum, it is again digested into smaller particles and mixed with enzymatic secretions for absorbing the last bit of nutrients from it.

Goats have a very long intestine that can measure more than 25 meters in length. The digesta moves through this intestine very slowly owing to segmentation and peristalsis. It is interesting to note that the intestine segmentation virtually squeezes the last ounce of water and nutrient from the digesta. This eventually leads to the excreta being reduced to small pellets.

Apart from this, due to the maximum retention of moisture from the digesta, only small quantities of water are lost through the poop. This explains why the droppings of goats appear to be dry.

What do the various shapes of a goat’s poop indicate? 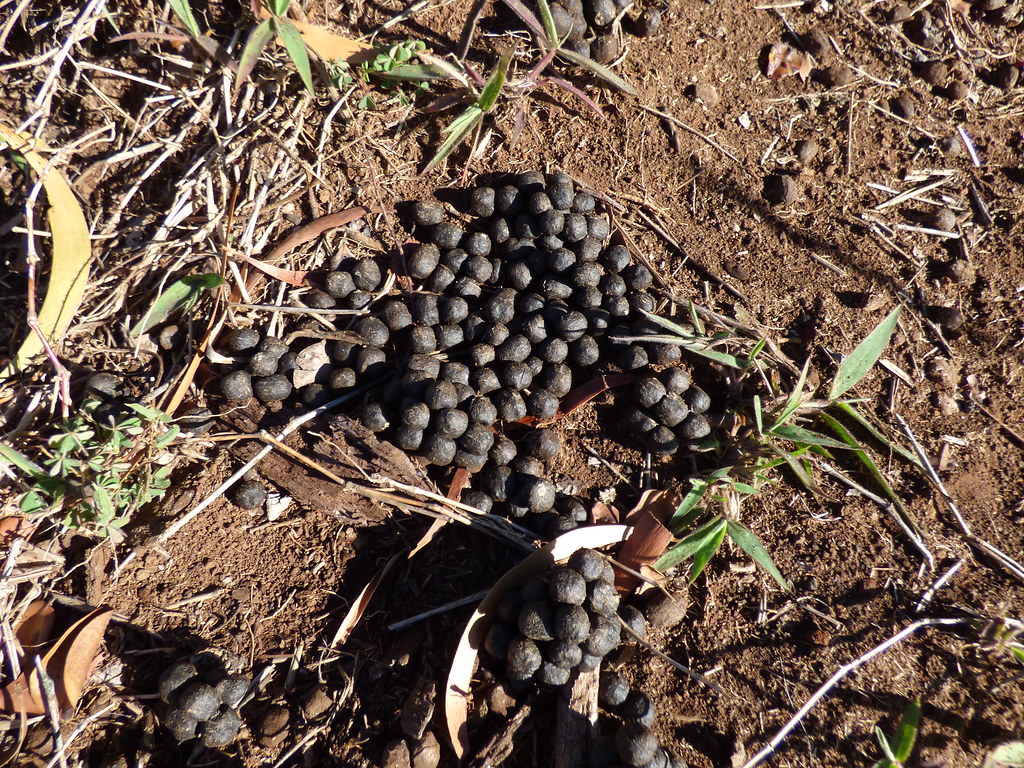 As said in the previous sections, the droppings of a healthy goat should be hard and oval-shaped pellets with a dark brown color. Even the slightest change in the shape, texture, or color can indicate many underlying conditions of difficulties.

In this section, we will have a look at the common variations in the droppings of a goat and try to understand what they might indicate.

We will first begin with the variation in the shape of an adult goats’ poop:

Pointy pellets are most commonly left unnoticed by many because of the difficulty in spotting them. These pellets do not show any variation in color or texture except for a slightly pointed formation at one end of the poop. You don’t have to worry even if you spot such pellets.

It is caused by excessive protein in their diet, and in most cases, it would return to normal in a few days. If it persists, you might want to reconsider their diet or reduce the quantity of protein-rich diet that you feed them.

As said in the previous sections, the droppings of a goat are evenly distributed, which is unique to goats. But in some cases, their droppings tend to form clumps.

The formation of clumps can indicate excessive consumption of food or issues caused by a sudden change in diet. It can even be an indication of increased parasitic load in the rumen. Generally, they would turn around on their own within a few days. If it persists, you should contact the vet at the earliest.

As the name suggests, in some cases, the droppings of a goat can look very similar to that of a dog’s droppings.

The chances are that a sudden change in its diet causes this. But to play things safe, it is advised to identify the goat and check its temperature to rule out any infection chances.

Ideally, their fecal sample should be sent out for testing to identify any parasitic infections. As always, the best thing to do is to contact your vet if the symptoms persist!

Diarrhea in goats can prove to be life-threatening owing to dehydration. Infection most often causes it in their rumen or due to a sudden change in their diet. Isolate the goat with diarrhea from the others and check their body temperature. Make sure that you keep them hydrated with electrolytes and call the vet at the earliest.

These variations in poop and their indications hold only in the case of adult goats. It is entirely different for baby goats (kids), and now we will have a look at them.

Scours are pretty common among kids, and the reasons can be many. The most common reason for Yellow Scours is the overconsumption of milk. In such cases, ensure that the kid doesn’t consume too much milk by milking the mom once in a day.

If you have put the kid on a feeding bottle diet, reduce the quantity of milk that you feed them. If the condition persists, contact the vet at the earliest.

This is most commonly caused because of E. coli infection. The best thing to do would be to contact the vet at the earliest!

It is the most common symptom of salmonella infection.

These scours are commonly the symptom of Enterotoxaemia, and the chances are that the kid will be in a lot of invisible pain. Look for any signs of discomfort as Enterotoxaemia can be fatal to the kids, if not given proper treatment.

No, contrary to popular belief, goat’s poop doesn’t stink as much as it is believed to be, which explains why the droppings of a goat are a highly sought for manure by hardcore gardeners. Apart from not being stinky, it doesn’t attract insects either!

Yes, goat poop makes excellent fertilizer, and it is of high demand in the market. As said in the previous section, the droppings of a goat are less messy than it is actually believed to be. Apart from this, it is also easy to spread it evenly, and it doesn’t attract insects too.

It is interesting to note that goat manure can be used in almost all gardens irrespective of whether you plant vegetables or flowering plants. Goat manure can create optimal growing conditions for your plants.

The droppings of a goat are found to contain almost double the amount of nitrogen than in other manure. Due to this, it can be the best natural supplement of nitrogen for your plants. Apart from this, goat manure is also found to be an excellent soil conditioner. This can come in handy, especially in the case of new gardens.

As said earlier, it is relatively easier to spread and mix the goat manure with soil. It can also improve the soil texture and improve the water retention capacity of the soil. By making the soil loose, goat manure also facilitates better access to oxygen by the root of plants.

Are there any potential drawbacks in using goat manure?

Though goat manure is an excellent fertilizer, it also has some potential drawbacks. Grass and hay make up the major portion of a goat’s diet, and owing to which, there are high chances of their droppings containing seeds of weed.

This is not just limited to goat droppings; rather, it is also the same with the cows and horses’ droppings.
To reduce the problem caused by these seeds in goat manure, always use well-composted goat manure.

Composting has been found to be effective in destroying most of the seeds in the poop. Apart from this, you can also spread mulch over the soil to deter the growth of weed.

Another major challenge involved is the pathogens that may be present in goat droppings. It is important that you use well-composted manure, especially if you are using it as a fertilizer for edible crops.

Similarly, if you were to use rotten goat droppings, ensure that you use them at least four months before harvesting the crop. Just because goat droppings are natural doesn’t mean that it is safe!

Similar to the droppings of all other animals, the poop of goat carries many disease-causing viruses and pathogens. In most cases, humans contact these diseases by coming in direct contact with these animals’ poop or urine. This contact can either happen through open wounds, drinking from contaminated water sources, and so on.

In this section, we will have a look at some of the common diseases that can potentially be contracted from goat poop.

Leptospirosis is a zoonotic disease that is mainly contracted by coming in direct contact with the poop or droppings of goats and other animals. It can also be transmitted by inhaling the dried poop particles that get airborne.

Leptospirosis can cause anything ranging from asymptomatic infection to severe diseases that can be fatal such as kidney failure, encephalitis, and so on.

Cryptosporidiosis is another zoonotic disease caused by the protozoan parasite Cryptosporidium. Though not fatal, it can turn out to be life-threatening in the case of immunocompromised individuals.

The other diseases that are contracted from goat poop include Psittacosis, Rabies, E. Coli infection, Salmonellosis, Ringworm infection, and so on.

Apart from the threat of contracting zoonotic diseases, another major threat posed by goat droppings is the contamination of groundwater. When used in excess as manure or by the improper disposal of the poop, it can contaminate groundwater.